Scheduling jobs in SAP is one of the routine operational tasks for customers running SAP workloads. SAP customers often use the transaction SM37 to run batch jobs within their SAP systems. When there are requirements for complex job scheduling and dependencies across multiple SAP systems, customers typically will use a third-party batch scheduling tool. It is always a challenge when the systems go down or unavailable for any reason. For customers running SAP and using a third-party job scheduling tool, it can be a significant challenge when the jobs do not run due to their unavailability. The impact of non-running jobs sometimes is isolated to one system; however, if multiple jobs have not run, it can be expensive and time-consuming to fix!

This blog will assume that you are familiar with SAP Job scheduling and its concepts. For this blog’s purpose, the pre-requisite is that the SAP system runs in AWS or a direct network path is available to connect to the SAP systems.

AWS SAP Professional Services has developed a cloud-native job Scheduling solution called “Simple Scheduler to simplify the routine operational task of scheduling jobs without maintaining additional infrastructure and software for managing those SAP jobs. Customers can use the “Simple Scheduler” solution to schedule SAP jobs using AWS serverless services. Simple Scheduler  executes the jobs at the defined intervals and sends out notifications upon completion or failures of the jobs.

Simple Scheduler is developed using Amazon DynamoDB, Amazon S3, Amazon API Gateway & AWS Step Functions. The majority of the AWS services used in this solution are serverless, which means there is no infrastructure to maintain. Another feature of the Simple Scheduler is to manage dependent batch jobs that need to be executed in sequence, e.g., running Job 2 once Job 1 completes. 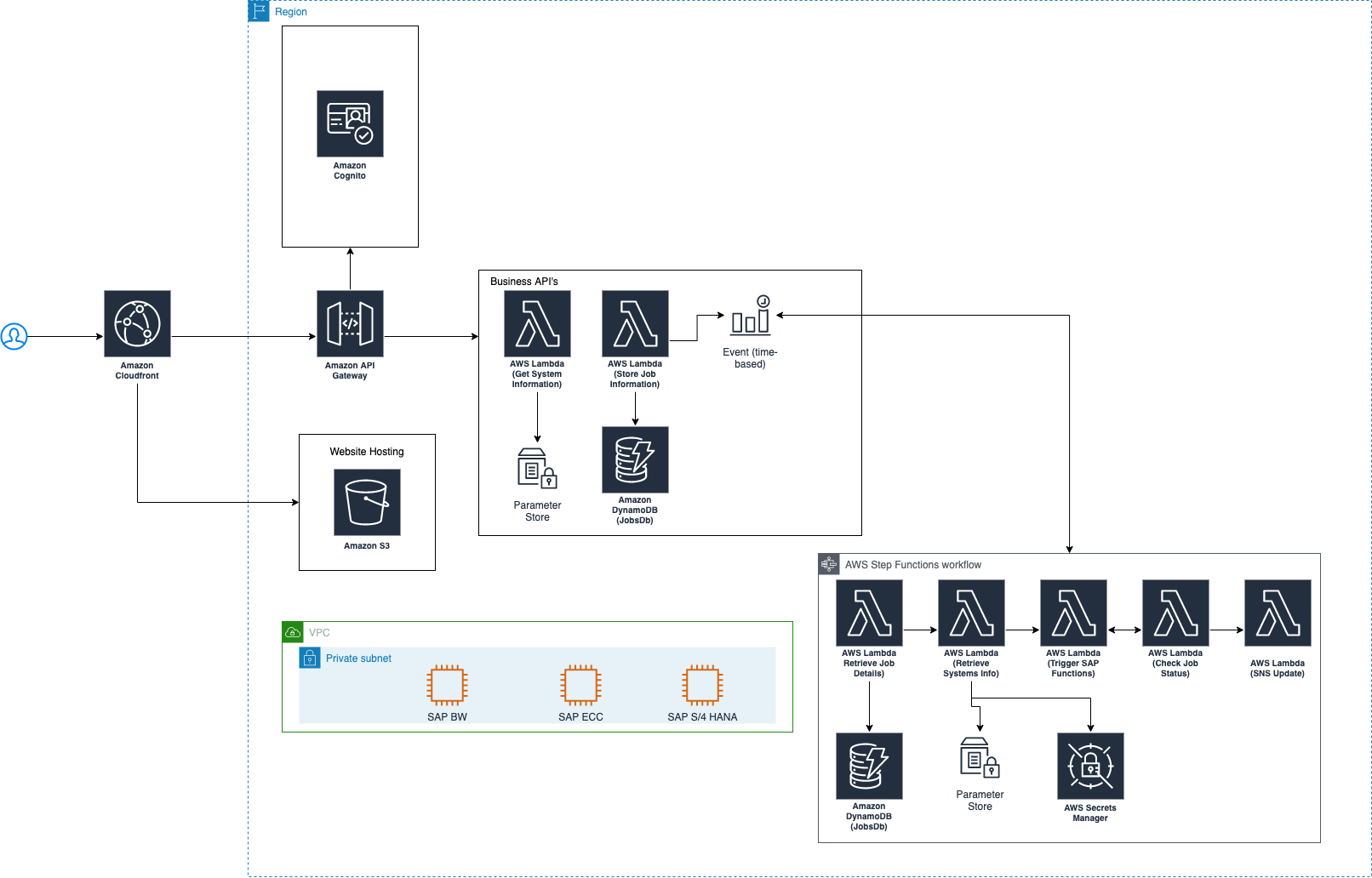 Based on the assumptions above, total monthly cost is an estimated $22.50, making your annual cost $270. Please refer to the following pricing details for each of the services discussed above as AWS routinely implements price reductions:

This offering serves as a turnkey solution in the form of native infrastructure as code and as an accelerator to build highly customized solutions for customer-specific requirements.

With Simple Scheduler, you only pay for the services that are used to schedule the jobs, helping to reduce operational licensing and infrastructure costs of third-party tools. You can run SAP batch jobs using an AWS cloud-native solution without a dependency on a third-party job scheduling tool.

Note: This is not an SAP-certified solution but does demonstrate how SAP batch jobs can be scheduled using AWS cloud-native tools.

The solution can be customized to orchestrate and extend to non-SAP jobs as well, which can be very useful as a single, inexpensive tool to operate jobs across your environment. If you would like a better understanding of how the Simple Scheduler solution works, then please connect with us via this link