The travel industry relies on OpenTravel messaging systems to collect and distribute travel data—like hotel inventory and pricing—to many independent ecommerce travel sites. These travel sites need immediate access to the most current hotel inventory and pricing data. This allows shoppers access to the available rooms at the right prices. Each time a room is reserved, unreserved, or there is a price change, an ordered message with minimal latency must be sent from the hotel system to the travel site.

In this blog post, we will describe the architectural considerations needed to scale a low latency FIFO messaging system built with Amazon Kinesis Data Streams.

The architecture must satisfy the following constraints:

Kinesis Data Streams is a managed service that enables real-time processing of streaming records. The service provides ordering of records, as well as the ability to read and replay records in the same order to multiple Amazon Kinesis applications. Kinesis data stream applications can also consume data in parallel from a stream through parallelization of consumers.

We will start with an architecture that supports one hotel with one destination, and scale it to support 1,000 hotels and 100 destinations (38,051 records per second). With the OpenTravel use case, the order of messages matters only within a stream of messages from a given hotel.

Smallest scale: One hotel with one processed delivery destination. One million messages a month.

In the example application, OpenTravel XML message data is the record payload. The record is written into the stream with a producer. The record is read from the stream shard by the consumer and sent to several HTTP destinations.

In the following OpenTravel message, there is only one field that is important to our use case: HotelCode. In OTA (OpenTravel Agency) messaging, order matters, but it only matters in the context of a given hotel, specified by the HotelCode. As we scale up our solution, we will use the HotelCode as a partition key. Each destination receives the same messages. If we are sending 100 destinations, then we will send the message 100 times. The average message size is 4 KB.

Asynchronous message processing presents challenges with error handling, because an error can be logged to the producer or consumer application logs. Short-lived errors can be resolved with a delayed retry. However, there are cases when the data is bad and the message will always cause an error; these messages should be added to a dead letter queue (DLQ).

Producer retries and consumer retries are some of reasons why records may be delivered more than once. Kinesis Data Streams does not automatically remove duplicate records. If the destination needs a strict guarantee of uniqueness, the message must have a primary key to remove duplicates when processed in the client (Handling Duplicate Records). In most cases, the destination can mitigate duplicate messages by processing the same message multiple times in a way that produces the same result (idempotence). If a destination endpoint becomes unavailable or is not performant, the consumer should back off and retry until the endpoint is available. The failure of a single destination endpoint should not impact the performance of delivery of messages to other destinations.

Messaging with one hotel and one destination

When starting at the smallest scale—one hotel and one destination—the system must support one million messages per month. This volume expects input of 4 GB of message data per month at a rate of 0.3805 records per second, and .0015 MB per second both input and output. For the system to process one hotel to one destination, it needs at least one producer, one stream, one shard, and a single consumer.

With this design, the single shard supports writes up to 250 records per second, up to a maximum data write total of 1 MB per second. PutRecords request supports up to 500 records and each record in the request can be as large as 1 MB. Because the average message size is 4 KB, it enables 250 records per second to be written to the shard.

The single shard can also support consumer reads up to five transactions per second, up to a maximum data read total of 2 MB per second. The producer writes to the shard in FIFO order. A consumer pulls from the shard and delivers to the destination in the same order as received. In this one hotel and one destination example, the consumer read capacity would be 500 records per second.

Figure 4: Records passing through the architecture

Messaging with 1,000 hotels and one destination

Next, we will maintain a single destination and scale the number of hotels from one hotel to 1,000 hotels. This scale increases the producer inputs from one million messages to one billion messages a month. This volume expects an input of 4 TB of message data per month at a rate of 380 records per second, and 1.486 MB per second.

The volume of incoming messages increased to 1.486 MB per second, requiring one additional shard. A shard can be split using the API to increase the overall throughput capacity. The write capacity is increased by distributing messages to the shards. We will use the HotelCode as a partition key, to maintain order of messages with respect to a given hotel. This will distribute the writes into the two shards. The messages for each HotelCode will be written into the same shard and maintain FIFO order. By using the HotelCode as a partition key, it doubles the stream write capacity to 2 MB per second.

A single consumer can read the records from each shard at 2 MB per second per shard. The consumer will iterate through each shard, processing the records in FIFO order based on the HotelCode. It then sends messages to the destination in the same order they were sent from the producer.

Messaging with 1,000 hotels and five destinations 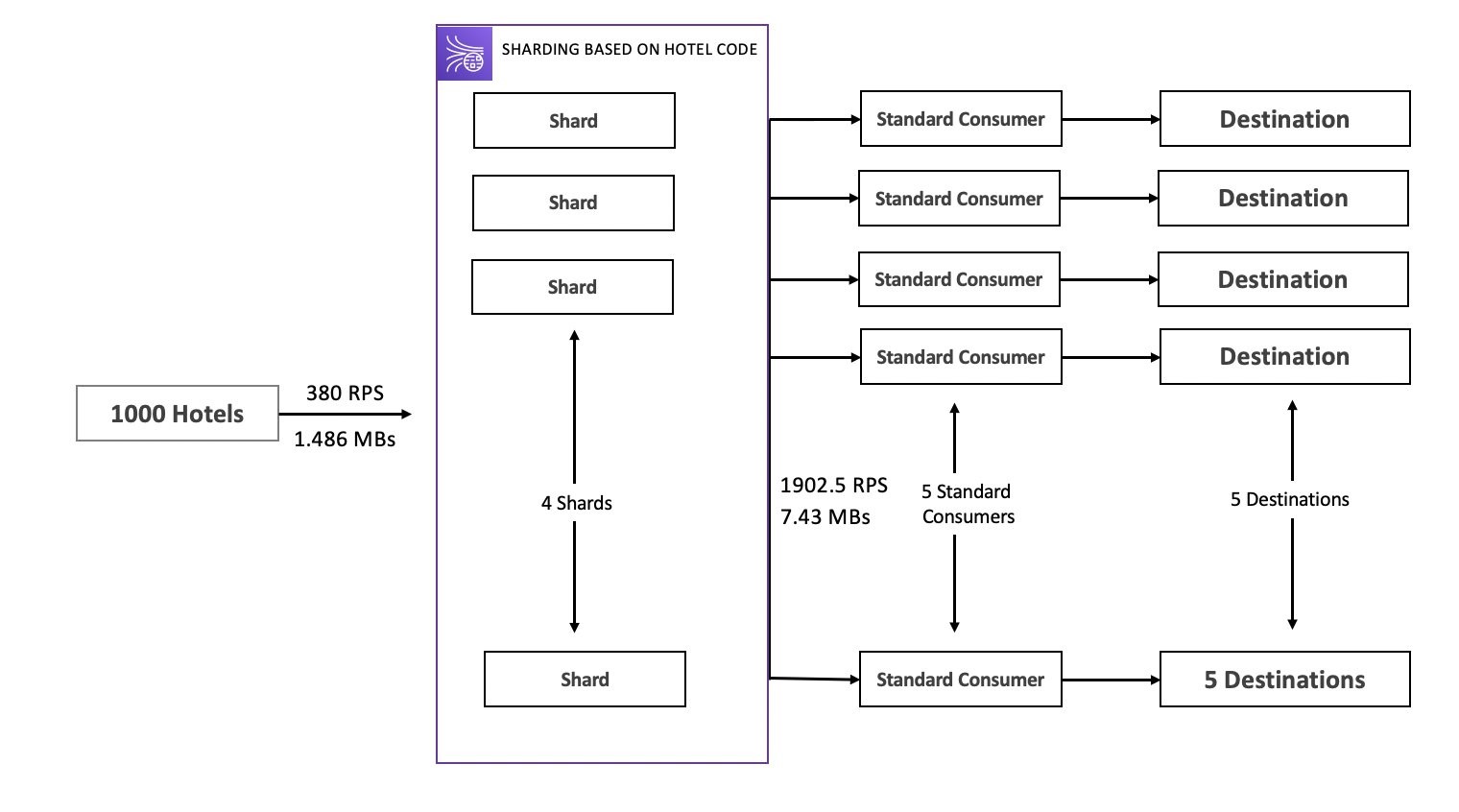 Messaging with 1,000 hotels and 100 destinations

The number of shards increases from four to 78 to support the required read throughput needed for 100 consumers, to attain a read capacity of 156 MB per second with 78 shards. 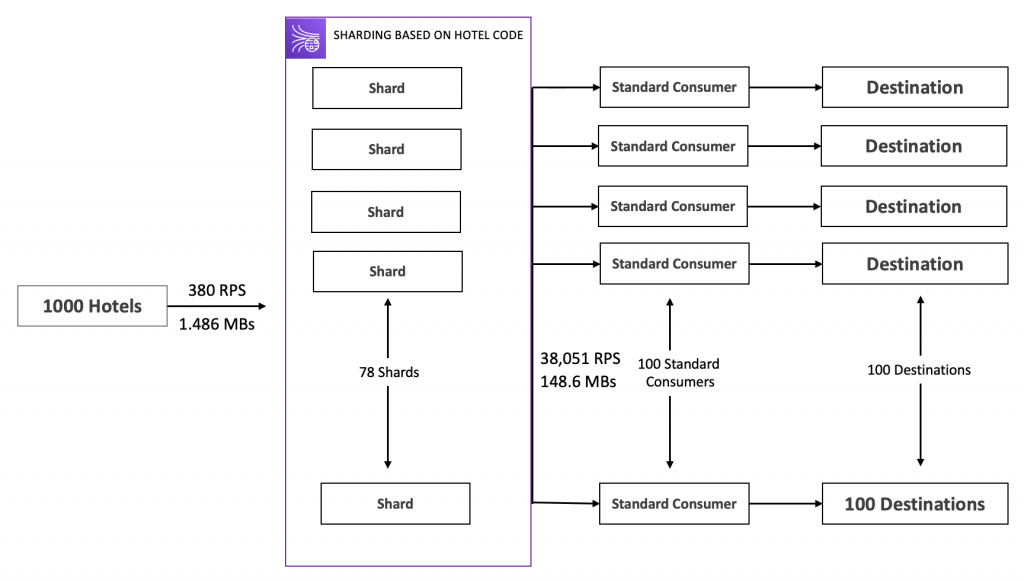 When using Lambda as an enhanced fan-out consumer, you can use the Event Source Mapping Parallelization Factor to have one Lambda pull from one shard concurrently with up to 10 parallel invocations per consumer. Each parallelized invocation contains messages with the same partition key (HotelCode) and maintains order. The invocations complete each message before processing with the next parallel invocation.

Consumers can gain performance improvements by setting a larger batch size for each invocation. When setting the Event Source Mapping batch size, the consumer can set the maximum number of records that the Lambda will retrieve from the stream at the time of invoking the function. The Event Source Mapping batch window can be used to adjust the time to wait to gather records for the batch before invoking the function.

The Lambda Event Source Mapping has a setting ReportBatchItemFailures that can be used to keep track of the last successfully processed record. When the next invocation of the Lambda starts the batch from the checkpoint, it starts with the failed record. This will occur until the maximum number of retries for the failed record occurs and it is expired. If this feature is enabled and a failure occurs, Lambda will prioritize checkpointing, over other set mechanisms, to minimize duplicate processing.

Lambda has built-in support for sending old or exhausted retries to an on-failure destination with the option of Amazon Simple Queue Service as a DLQ or SNS topic. The Lambda consumer can be configured with maximum record retries and maximum record age, so repeated failures are sent to a DLQ and handled with a separate Lambda function. 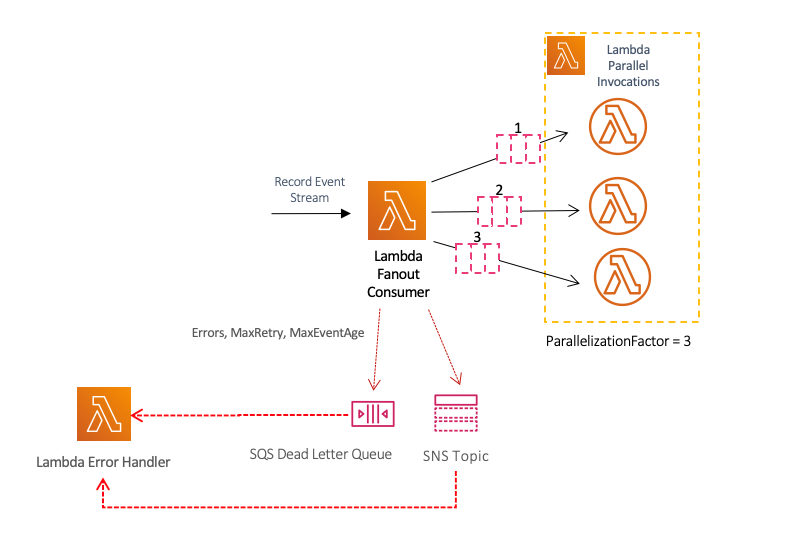 This architecture increases throughput to 200 MB per second, with only 12 shards, compared to 78 shards with standard consumers.

In this blog post, we explained how to use Kinesis Data Streams to process low latency ordered messages at scale with OpenTravel data. We reviewed the aspects of efficient processing and message consumption, scaling considerations, and error handling scenarios.  We explored multiple architectures, one dimension of scale at a time, to demonstrate several considerations for scaling the OpenTravel messaging system.