Updated April 2021  to offer more Apache JMeter tips, and highlight some capabilities in the newer version of Apache JMeter.

In the introductory post of this series, we discussed benchmarking benefits and best practices common across different open-source benchmarking tools. As a reminder of why benchmarking is important, Amazon Redshift allows you to scale storage and compute independently, and for you to choose an appropriately balanced compute layer, you need to profile the compute requirements of various production workloads. Existing Amazon Redshift customers also desire an approach to scale up with eyes wide open, and benchmarking different Amazon Redshift cluster configurations against various production workloads can help you appropriately accommodate workload expansion. In addition, you may also use benchmark tests to proactively monitor a production cluster’s performance in real time.

Open-source tools, with their cost-efficiency and vendor neutrality, are often the preferred choice for profiling your production workloads and benchmark tests. However, best practices for using these tools are scarce, possibly resulting in flawed compute profiles, flawed benchmark results, customer frustration, or bloated timelines.

One final point before we get started: there is a lot that could be said about benchmarking—more than can be accommodated in a single post. Analytics Specialists Solutions Architects such as myself frequently and happily engage with current and prospective customers to help you evaluate your benchmarking strategy and approach at no charge. I highly recommend you take advantage of that benefit by reaching out to your AWS account SA.

Apache JMeter is an open-source load testing application written in Java that you can use to load test web applications, backend server applications, databases, and more. You can run it on Windows and a number of different Linux/UNIX systems; for this post we run it in a Windows environment. To install Apache JMeter on a Windows EC2 machine, complete the following steps:

In the following example, I demonstrate creating a straightforward load test using both the Apache JMeter GUI and CLI. The load test aims to measure query throughput while simulating 50 concurrent users with the following personas:

The load test is configured to run for 15 minutes, which is a pretty short test duration, so you can increase that setting to 30 minutes or more. We rely on JMeter’s query throughput calculation, but we can also manually compute query throughput from the runtime metadata that is gathered if we so desire.

For this post, I skip over discussing the possible Amazon Redshift cluster tweaks that you could use to squeeze every drop of performance out of Amazon Redshift, and instead rely on the strength of its default state to be optimized to achieve excellent query throughput on diverse workloads.

The following diagram provides a basic illustration of the various Apache JMeter building blocks to be leveraged in this load test, how they interact with each other, and the typical order in which are they created; in some cases, I mention the specific implementation of the building block to be used in parenthesis (such as Ultimate Thread Group).

The following table delves deeper into the purpose that each building block serves in our load test.

The following screenshot is the resulting load test. 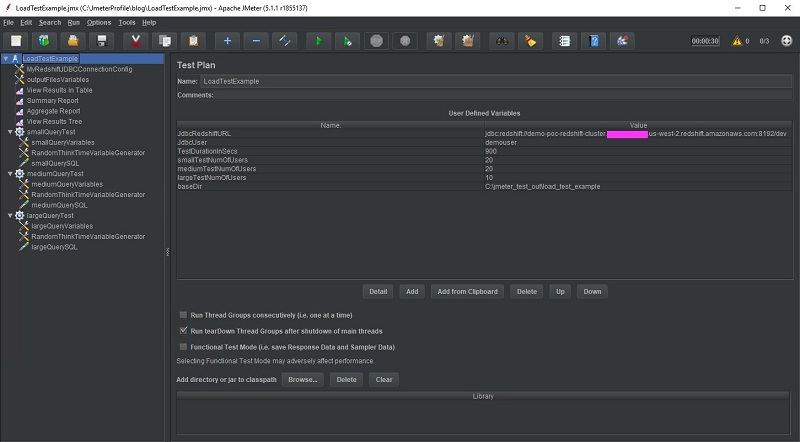 The following screenshot provides a close up of the building block tree. 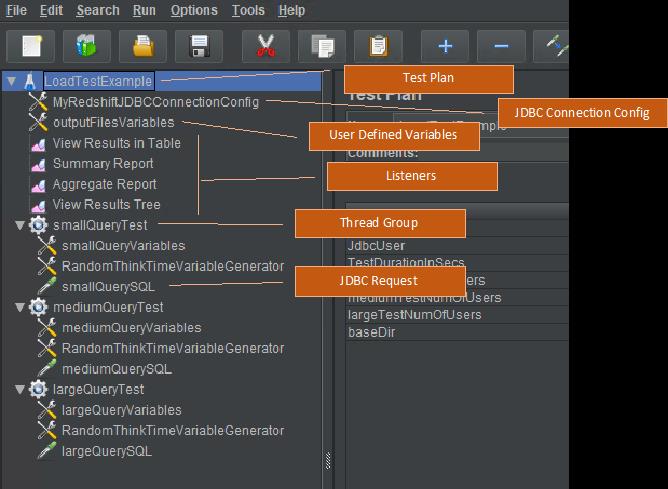 In the following sections, we examine each building block in greater detail.

The test plan serves as the parent container for our entire benchmark test, and we can change its name in the visual tree that appears in the Apache JMeter GUI by editing the Name field.

I take advantage of the User Defined Variables section to set my own custom variables that hold values needed by all components in the test case, such as the JDBC URL, test duration, and number of users submitting small, medium, and large queries. The baseDir variable is actually a variable that is intended to be embedded in other variables, rather than directly referenced by other test components. I left all other settings at their default on this page.

By setting the Max Number of Connections to 0, the connection pool can grow as large as it needs to, which I have often found to be the best option. Alternatively, setting Max Number of Connections to the desired number of threads, doesn’t guarantee that a thread will always use the same connection which could result in unpredictable behavior for stateful queries or test scenarios involving multiple users. For example, without a thread consistently using the same connection, errors could result with end-to-end ETL test chains that rely on temp tables for best performance, or BI workloads that automatically split report creation into multiple steps. Be sure to set it as you see fit with this in mind.

In the Init SQL statements section, I provide an example of how to use SQL to disable the result set cache in Amazon Redshift for every connection created, or perform other similar initialization code.

Towards the end, I input the database JDBC URL (which is actually a variable reference to a variable defined in the test plan), JDBC driver class name, and database username and password. I left all other fields at their default on this page. 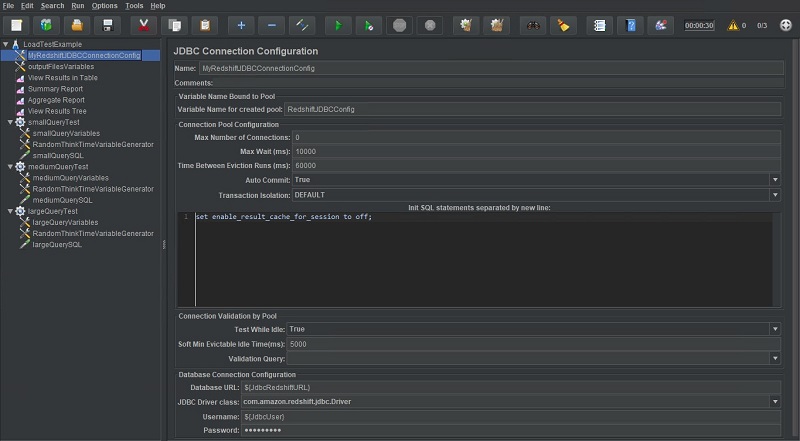 Listeners control where test output is written and how it’s processed. There are many different kinds of listeners that, for example, allow you to capture your test output as a tree, table, or graph. Other listeners can summarize and aggregate test metadata (such as the number of test samples submitted during the test). I choose to add several listeners in this test plan just for demonstration, but I have found the listeners Aggregate Report and View Results in Table to be most helpful to me. The following screenshot shows the View Results in Table output.

You can also save output from listeners after a test run to a different file through the JMeter menu.

A thread group can be thought of as a group of simulated users, which is why for this post, I create three separate thread groups: one to represent each of three previously mentioned user personas being simulated (small, medium, and large). Each thread group is named accordingly.

We use the Thread Schedule section to control how many users should be created and at what time interval. In this test, I chose to have all 20 small users created at start time without any delays. This is achieved by a one-row entry in the Thread Schedule and setting the Start Threads Count thread group property to 20 users (or the matching variable, as we do in the following screenshot). 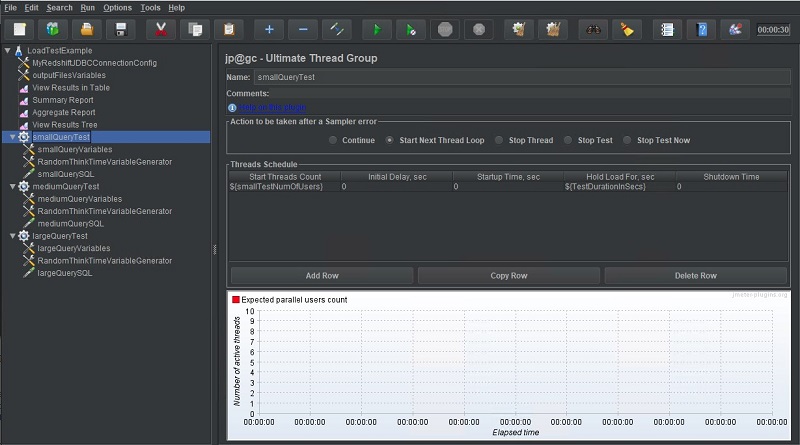 Alternatively, I could stagger user creation by creating multiple rows and setting the Initial Delay sec field to control each row’s startup delay. With the row entries in the following screenshot, an additional five users are created every 5 seconds.

An additional User Defined Variables instance is added to each of the three thread groups to hold the variables in their individual scope, or that would preferably be configurable at an individual thread group level. For this post, I make the JDBC Connection Configuration a variable so that it’s customizable for each individual thread group (JDBC_Variable_Name_In_Pool). This allows me to, for example, rapidly switch two different test clusters.

The JDBC Request can be thought of as the benchmark query or SQL test query to be submitted non-stop by each simulated user in this thread group. To configure this JDBC Request, I specified the appropriate JDBC Connection Configuration and some very simple test SQL. I could have also used Apache JMeter’s ability to parameterize queries so that they vary from one iteration to another using a predetermined set of parameter values. For example, for the SQL statement select * from customer where cust_id=<some value>, Apache JMeter could be configured to set the value in the filter clause to a randomly chosen value from a pre-compiled list of filter values for each sample submission. I left all other settings at their default. 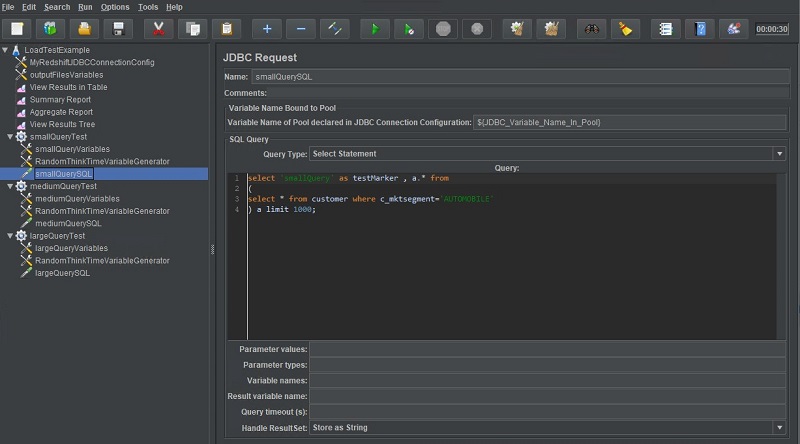 The Apache JMeter GUI saves test plans in .jmx files that can be used to run the same test plan in Apache JMeter’s console mode. The following CLI command demonstrates how you can use the LoadTestExample.jmx file that was created in the previous steps using the GUI to run the same load test:

It is also possible to create .jmx files that accept runtime parameters through the command line. This helps avoid having to maintain multiple versions of the same .jmx file with different runtime settings. For example, instead of maintaining test1_50users.jmx and test1_100users.jmx files, a single test1.jmx file could be maintained and the concurrency setting of 50 or 100 could be passed in through the command line. The sample output is from a 30-second run of LoadTestExample.jmx. 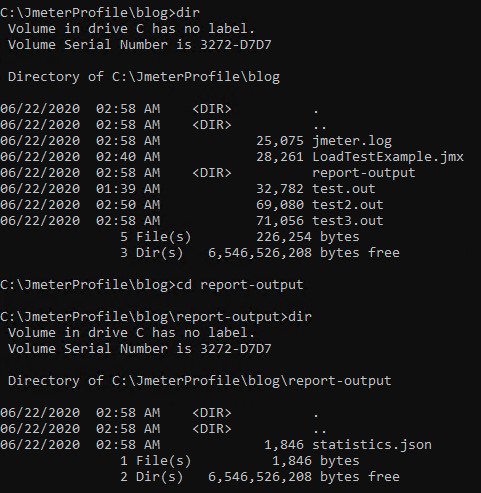 The \report-output\statistics.json file captures a lot of useful metrics, such as the total samples (like SQL queries) submitted during the test duration, achieved query throughput, and number of small, medium, and large queries and their individual throughput. The following screenshot shows a sampling of the data from statistics.json. 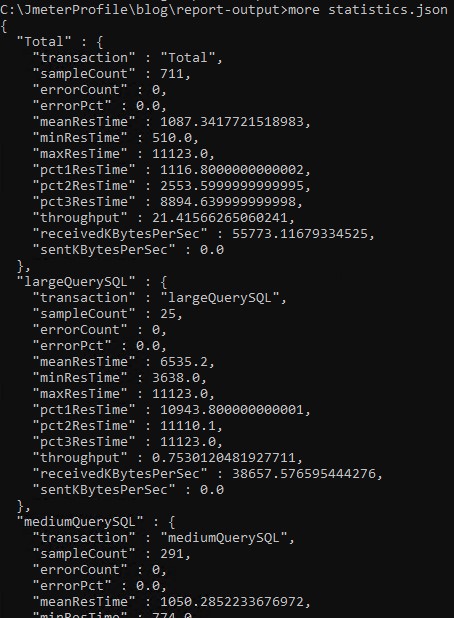 In this series of posts, we discussed several recommended best practices for conducting high-quality benchmark tests. Some of the best practices represented core principles that span all the open-source tools discussed (such as consistency in testing methodology). In this particular post, we reviewed the strengths and appropriateness of Apache JMeter for conducting benchmark tests. I hope this series has been helpful, and strongly encourage current and prospective customers to reach out to me or other AWS colleagues if you wish to delve deeper.

Asser Moustafa is an Analytics Specialist Solutions Architect at AWS based out of Dallas, Texas. He advises customers in the Americas on their Amazon Redshift and data lake architectures and migrations, starting from the POC stage to actual production deployment and maintenance