How EMX reduced data pipeline costs by 85% with Amazon Athena

This is a guest blog post by Gary Bouton and Louis Ashner from EMX. In their own words, “ENGINE Media Exchange (EMX) is a leading marketing technology company, leveraging a patented, end-to-end tech stack purpose-built to meet the demands of today’s digital marketplace. The company creates both open- and closed-loop solutions designed to unify advertisers, platforms, and publishers across digital media channels—including advanced TV, video, display, search, and social.”

While recognized as an independent solutions provider for the digital media landscape, EMX also serves as the technology and programmatic division for its parent, ENGINE—a global data-driven marketing company serving advertising’s most recognized brands.

In the past, we used typical legacy data warehouse solutions for our data pipeline. We needed massive clusters to house all our raw data as well as advanced pipelines to import that data into the final database. We then needed to query the raw data clusters to aggregate and move it into a separate cluster for more frequent querying. This process was not only time consuming, but also quite expensive, because these legacy database clusters weren’t cheap in order to house that much data.

Then came Amazon Athena, which allowed us to not only simplify our pipeline, but also save on costs significantly. We were able to simply route the raw data straight to Amazon Simple Storage Service (Amazon S3) at minimal storage costs, then query the data with Athena to move aggregate data into small Amazon Redshift clusters for querying more frequently. Athena’s querying is not only quick, but the query costs are mere pennies when the table is set up correctly with partitions and the query utilizes them properly. Additionally, we can increase our data retention time, because the cost of storing data in Amazon S3 is significantly cheaper than an ever-growing legacy data warehousing solution.

In short, Athena allowed us to simplify our data pipeline while saving 85% on data storage costs at the same time.

For most companies, data is an ever-growing problem. The volume, velocity, variety, and veracity of its availability can be performance limiting and a financial burden.

Data is very important to us at EMX; we process over 450,000 requests per second, which we clean, audit, and deliver for reporting and optimizations to keep our clients informed and current in an ever-changing ad space.

To do this, we have to have a backend system that is robust, on time, available, and cost effective in order to meet the demands of our split-second decision-making.

Why Athena is the right tool for EMX

As detailed below, Athena’s pay-per-query pricing model, performance and reliability at scale, and ease of use made it the right tool for us.

Why we continue to grow with Athena

We continue to grow with Athena for the following reasons:

The following sections detail how EMX uses Athena to build, manage, and orchestrate its backend ELT work with minimal coding and maintenance. 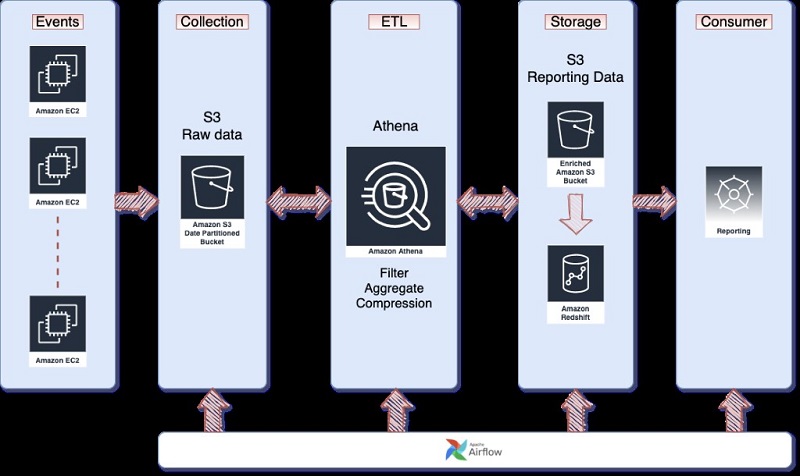 How we use Athena

Our custom scripts stream batched data each minute from auction servers directly to raw S3 buckets. The data is dropped in a .gzip format to datetime-partitioned S3 buckets. This partition structure helps us limit our Athena query scan. For example, the partitioned buckets look like the following screenshot.

When the data has reached these partitioned buckets, EMX uses Apache Airflow to schedule various jobs across Athena. The following screenshot shows our DAG for our most-used pipeline.

Before beginning to run Athena queries, we run two checks on our data in Amazon S3:

On the success of both tasks, we start adding the latest partition to an Athena table.

When the partition is added to the table, we start running the query. The query status is polled every 10 seconds to get the latest status on the query performance until completion. The query returns the status as success, failed, or canceled. Depending on what query status is returned, further tasks are then forked.

At times, we have noticed queries fail with the error Query resource exhausted at this scale, which usually goes away on triggered retries. For the same reason, we have a retry mechanism in place on the execute_athena_sql task. If the retry fails, it alerts the team and data is copied over to a debug bucket for further investigation. If it succeeds, it moves ahead with further transformation.

For further transformation, we get the output of the Athena query back in Amazon S3, and then we add the business rules to enrich the data in Amazon S3.

Based on the pipeline logic, the data is then copied from Amazon S3 to different data stores, one of them being Amazon Redshift.

The last step is to clean up the metadata that was generated by the Athena query. 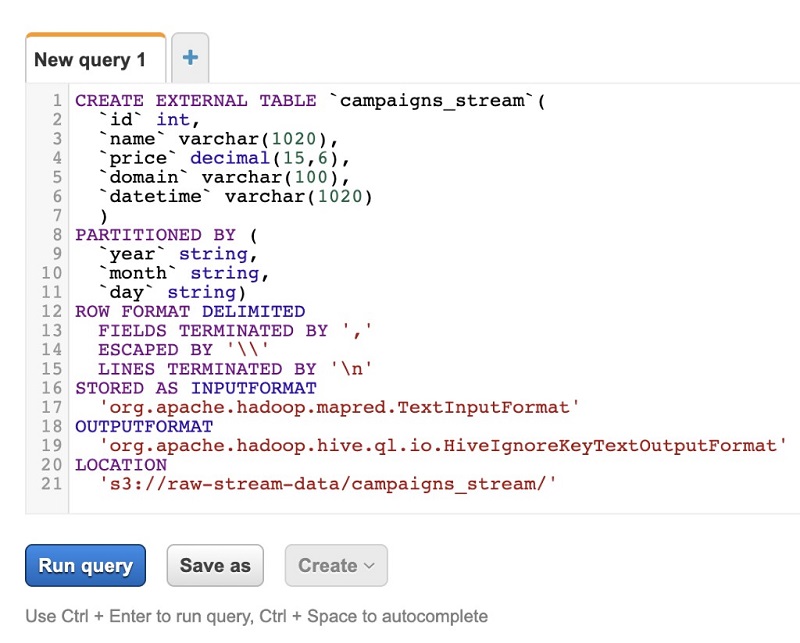 As soon as our scheduled jobs are triggered, the job runs data checks, data matches, and complex SQL queries on this table using the latest date partition, which was loaded in the last DAG task, which limits the data scan and reduces costs. The results are generated and pushed to the S3 reporting bucket to be picked up by other processes. The results can be generated in different formats like CSV, Apache Avro, and Apache Parquet using the CTAS or INSERT INTO command.

For example, running the following simple count query for each domain scans approximately 1.65 TB of data and gives back the results in less than 600 seconds, without needing us to set up or manage any infrastructure.

When the query is complete and the output files in the S3 reporting bucket are ready, they’re picked up by our DAG and pushed into data storage like Amazon Redshift.

By default, Athena has a soft limit of 20 DML active queries (CTAS). When we have multiple jobs running in parallel, we may hit that limit, delaying our time-sensitive pipelines and jobs. To overcome this, we allocated a fixed time window in each hour for our most critical pipelines, and other jobs with lower priority are run later.

For example, our production pipelines get priority 1 – with window minute 0 to minute 15 of every hour. We’re aware that we can request a limit increase from AWS, but we instead decided to use this opportunity to improve the resilience and robustness of our system.

“Build, don’t buy” has been EMX’s motto. It drives our innovation forward, much like Athena continues to be able to solve all the questions we ask of it. We build boutique and large-scale solutions for our advertising clients, which require a malleable and robust ETL backend that takes the work and cost to a manageable level. We built an ever-scaling, cost-effective, and highly available ETL backend with Athena.

Our successes with Athena are shown through both time and cost savings, including:

What we can do with data is only limited by the time we need in herding, cleaning, and delivering this data for insights and development. Since throwing 100% of our ETL backend systems into Athena, we have increased product delivery and systems optimization four-fold in only a quick short year. Athena and the Athena team continue to grow with us even as our data needs begin to soar exponentially, adding more tools that reduce workflows, management, and job distribution in the AWS ecosystem itself. This entropy between EMX and Athena has resulted in increased cooperation and more business with us and our growing lists of clients.

Our “Why” is building the tools for the future, and Athena personifies our “Why” in delivering what EMX is about: scale, on time, and delivery of data optimized for the modern era.

Louis Ashner is EVP of Technology at ENGINE Media Exchange. He has a passion for making the Internet faster, and is an ad-tech pioneer with more than 10 years of experience working with digital advertising, including real-time bidding and programmatic advertising. His 9 patents in networking optimization and data caching are used to power EMX’s proprietary ad exchange.