This post is the second part of the Automate vulnerability management and remediation series using Amazon Inspector and AWS Systems Manager.

The runbook requires parameters for the Organizational Unit (OU) ID or the account ID. Next, you’ll specify resource tags for targeting and an optional severity filter. Choose to reboot the Amazon EC2 instance after installing updates so that the processes can benefit from the updates immediately. You can defer the reboot by selecting the no reboot option to avoid disrupting the workload outside a maintenance window.

The Automation runbook performs a query to identify all Amazon EC2 instances in the OU or the account with the mentioned tag. Then, it conducts another query to Amazon Inspector to identify the findings for the Amazon EC2 instances with the specified tag and severity (if provided). Next, the runbook performs an install patch operation for the affected packages listed in these findings if an update is available. The information on the affected packages is part of the Amazon Inspector finding, as shown in the following figure. Finally, the automation will reboot or defer reboots on the Amazon EC2 instance based on the selected reboot option. 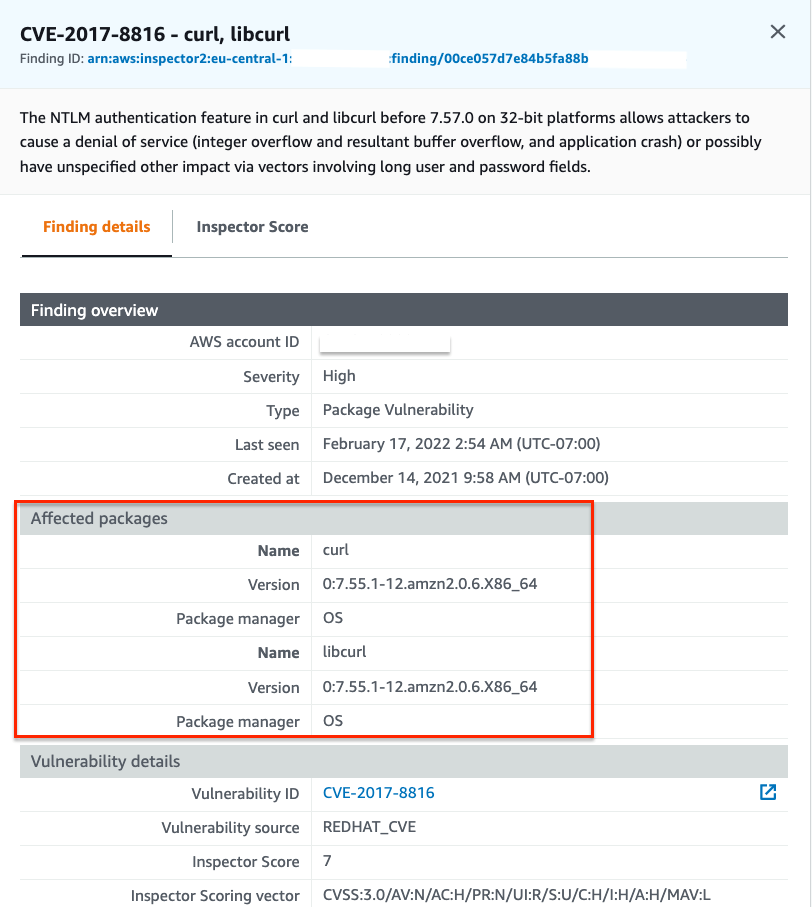 The automationRunPatchBaselineRunbook automation is initiated by directly invoking it from the Systems Manager Automation console as described in the solution overview section. Let’s review the process as illustrated in the following figure:

Amazon Inspector sets the finding status of the remediated findings to CLOSED after installing the patches successfully.

You’re ready to initiate the automationRunPatchBaselineRunbook directly from the Systems Manager Automation console.

The runbook name contains a prefix from the AWS CloudFormation stack’s name. 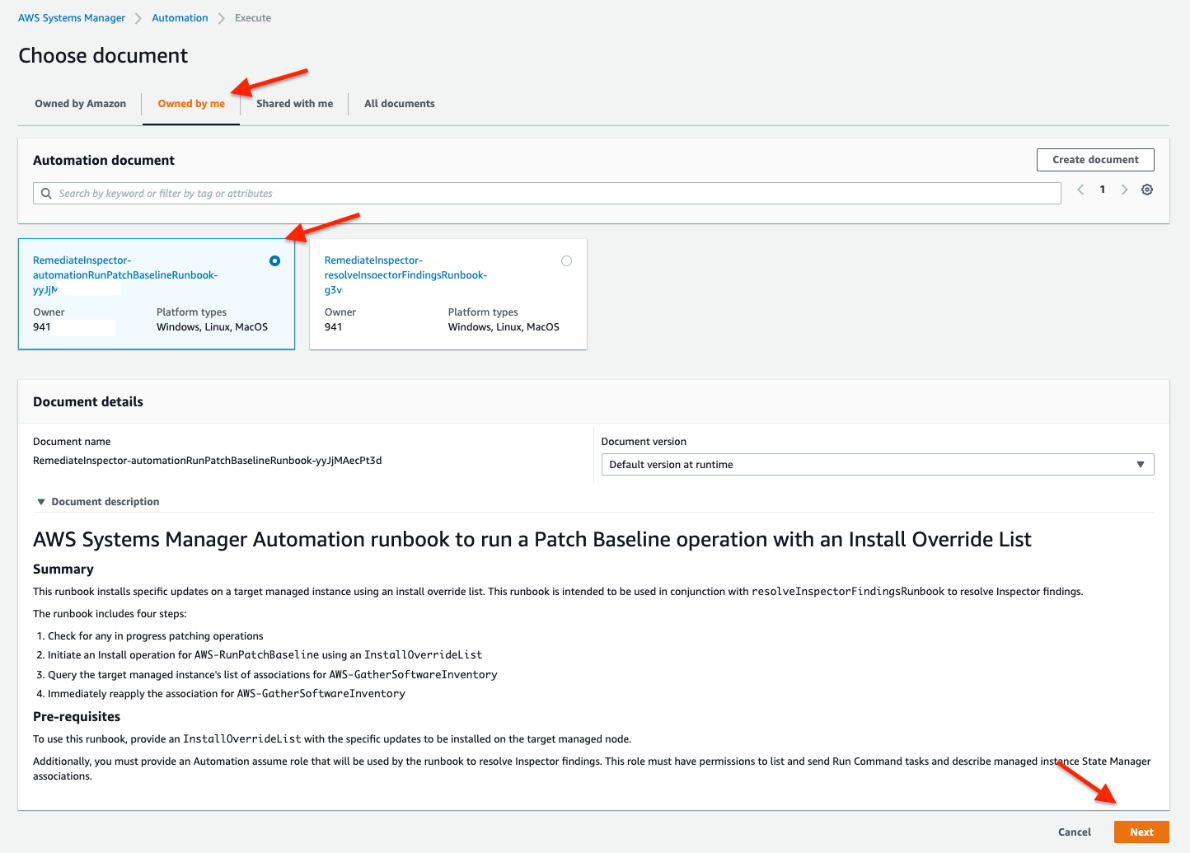 Note that you can only use one tag key/value pair. 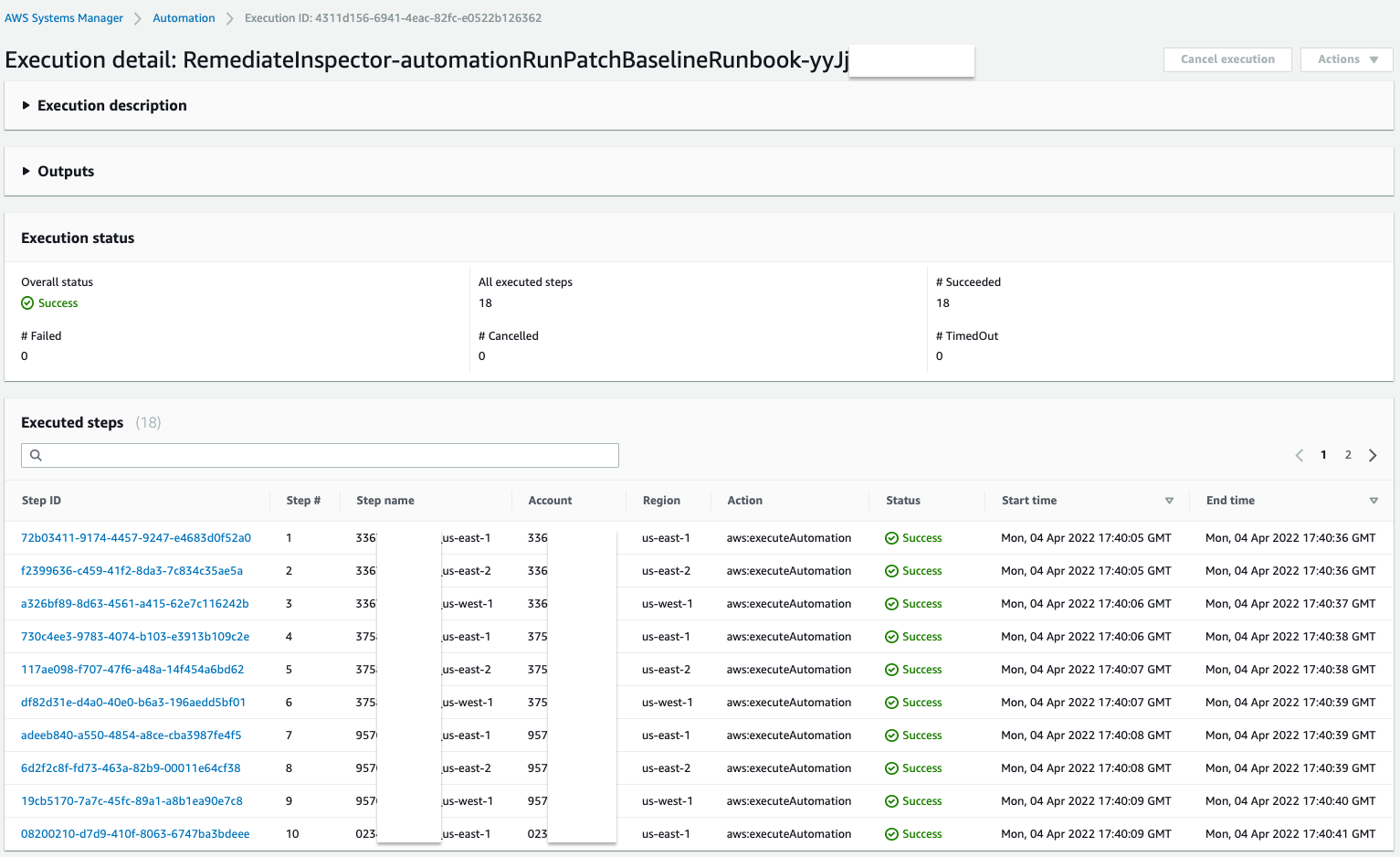 In Part 1, we walked through how to use the Security Hub custom actions Rem-Inspector-RBT and Rem-Inspector-NoRBT to remediate selected Amazon Inspector findings for a specific CVE across Amazon EC2 instances in different AWS accounts and regions.

In Part 2, we discussed remediating Amazon Inspector findings at scale by initiating the Automation runbook, automationRunPatchBaselineRunbook, directly from the Automation console.

Suppose you want to remediate Inspector findings for selected EC2 instances affected by a specific vulnerability. In that case, you should use the Security Hub custom action method described in part 1. You should use the Systems Manager Automation runbook direct invocation method described in this blog to patch all software vulnerabilities identified by Inspector for one or more EC2 instances matching a specified tag.

The automation runbook can help you reduce the operational complexity of manual updates, reduce errors, and increase the remediation speed.