If you have Microsoft SQL Server workloads running in an on-premises environment, you might be looking for ways to migrate to AWS with minimal or no changes to your existing environment. You want to lift and shift one or more large-scale machines from an on-premises environment to AWS without changing the SQL Server version, operating system, or code in the databases and with near-zero or minimal downtime. You can use CloudEndure Migration to quickly lift and shift physical, virtual, or cloud servers without compatibility issues, performance impact, or long cutover windows.

There are ways to migrate a SQL Server database to an Amazon Elastic Compute Cloud (Amazon EC2) instance using SQL Server features like log shipping, mirroring, and Always On availability groups. These options are appropriate if you’re migrating a single database or set of databases to a new SQL Server instance running on Amazon EC2. These options are database-native and dependent on specific SQL Server versions and editions. In addition to the database migration, you might also have to perform steps to migrate SQL Server level objects like logins, jobs, database mail, and linked servers.

In this blog post, we highlight some best practices when you use CloudEndure Migration to migrate Microsoft SQL Server database workloads to AWS. We include information to consider before, during, and after migration.

As outlined in the prescriptive guidance, the following diagram illustrates the solution architecture for migrating an on-premises SQL Server to an EC2 instance. 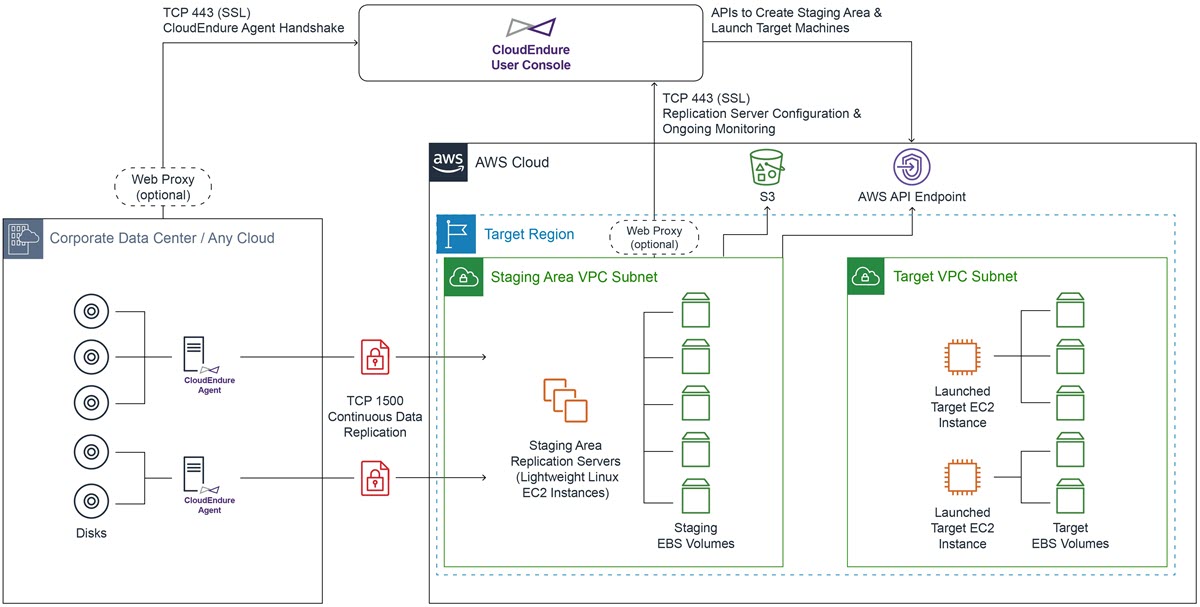 Here are the high level steps:

SQL Server Failover Cluster Instance (FCI) relies on shared storage being accessible from all nodes participating in FCI. To migrate FCI instances using CloudEndure Migration, you must break up the cluster on the target machine after migration and use alternative approaches for HA that don’t require shared storage.

If you use Always On availability groups in your on-premises environment, you can deploy a similar architecture on AWS and use SQL Server native tools to replicate the databases with minimal downtime. For information, see the Best Practices for Deploying SQL Server on AWS whitepaper and the Using Always On availability groups and Windows Server Failover Clustering (WSFC) quick start.

The tempdb system database in SQL Server is a work area for the database to temporarily store data until a process is complete and the data can be written to the log files. The tempdb will be dropped and recreated each time the SQL Server service is restarted, starting with a new clean copy of the database.

tempdb is usually placed on separate drives. Having the tempdb files on separate drives would provide additional performance benefit. To optimize the replication data transfers or to avoid lags in case of heavy tempdb usage, you can exclude tempdb drives while installing the CloudEndure Migration agent because it is recreated when the server boots on AWS hardware.

To ignore tempdb drives while installing the CloudEndure Migration agent, follow these steps:

To optimize the replication data transfers, the best practice is not to replicate the disks that the database is dumping the backups on. Backups tend to generate huge amounts of writes and slow down replication.

You can perform test cutover of your source SQL Server to do a sanity check. Block the traffic to domain controller. When you perform the test cutover, use Remote Desktop using a local user. Otherwise, the test server that boots on AWS hardware might join to the domain automatically while the on-premises server is still being used by the application.

If you need Active Directory authentication to perform a sanity check during test cutover, follow these steps.

Analyze your scheduled agent jobs. For example, there might be SQL Server Integration Services (SSIS) packages that are scheduled on your on-premises server that would connect to the database, get the data, do transformations, and then save the data to a CSV file on a Server Message Block (SMB) file share. These files are consumed by a different application or process.

Take care of maintenance plan schedules during the cutover window. For example, a SQL Server reindexing maintenance job will cause most of the database blocks to change and generate lots of transaction logs. This might result in replication lag in the CloudEndure Migration console and delay the cutover. Avoid scheduling reindex jobs before the planned cutover date.

Server restarts causes re-scan of the volumes and impact the cutover. Avoid any patches or upgrades before the cutover that would require a restart of the server.

In this post, we offered some best practices and considerations for migrating your on-premises SQL Server database to an Amazon EC2 instance using CloudEndure Migration.

Ranga Cherukuri is a Cloud Consultant with Professional services team at AWS. Ranga focuses on helping customers to build highly available, cost-effective database solutions and migrate their large scale SQL Server databases to AWS. He is passionate about Databases and Analytics.