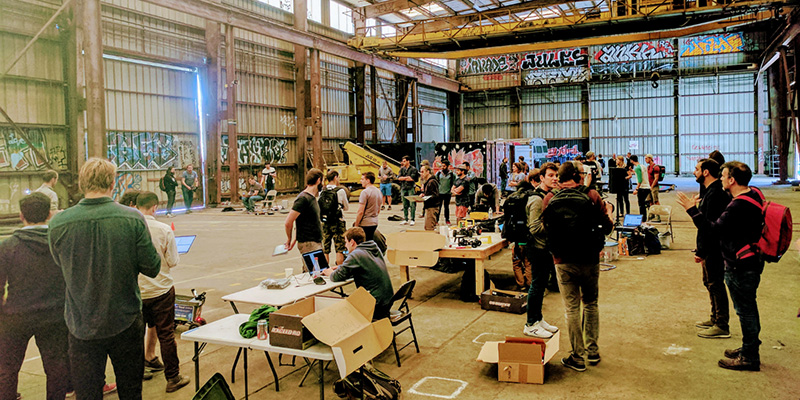 Chris Anderson has been right before. In the pages of Wired, Anderson—formerly the tech/culture publication’s editor—described way back in 2012 how then exotic (and expensive) drone technology would eventually become available to everyone. And it has. (Thanks, in no small part, to Anderson himself, who founded the commercial drone platform company 3D Robotics in 2009.)

Anderson has always loved using the latest technology on the relative cheap. Applying technology from what he calls the “peace dividend from the smartphone wars,” Anderson started building his own drones and in 2007, launched DIY Drones, a central resource for makers and amateur enthusiasts to build a community around the flying machines. He’s since gone on to launch DIY Robocars, a similar resource for robocar builders and racers.

While drones are commonplace now, people initially thought Anderson’s efforts were cute—as in, they were mere toys.

But Anderson and his co-enthusiasts continued to code and test and improve until one day, he says, “it really was the future of aviation.”

Taking a DIY approach to drones raised all sorts of concerns. The idea of taking something from the aerospace industry, so closely tied to the traditional military-industrial complex, seemed impossible. “But we did it anyway and it created a new industry,” Anderson says. With drones, a bottom-up, grassroots approach to autonomy in the air actually worked.

Anderson sees no reason why the same DIY approach won’t also play out with driverless cars. “Self-driving cars are really interesting, but I don’t have one and I can’t afford one,” Anderson says. The technology is still developing and isn’t ready yet to trickle down to ordinary consumers. “Am I going to sit here and read headlines, or am I going to roll up my sleeves and do something?” he asks.

Cue rolling up of sleeves and the introduction of DIY Robocars.

To be clear, Anderson isn’t talking about human-sized passenger cars. He’s talking inexpensive, 1/16th-scale cars that can be raced against each other. (In fact, DIY Robocars helps autonomous car enthusiasts find each other and runs a race in Oakland every month where everyone is welcome.) Onboard they run sophisticated tech, including on-board sensors (camera, sonar, LIDAR, radar) that transmit relevant data via Wi-Fi to a laptop and then to the cloud, where all the necessary computer vision, robotic controls, localization, path planning, and more can get an assist.

And as with the early drones that Anderson and his crew built, some will write these cars off as toys. But what they really are, Anderson argues, are rolling R&D on a budget for, not just a community of hacker enthusiasts, but the auto industry more broadly. Traditional industries have to be responsible, he adds. They have “business models, and as a result, their innovation path is relatively constrained. But what if you could crash?” he asks. “Then you might innovate differently.” In fact, the car industry has always innovated through races. Anderson offers the example of Formula 1, a venue where new and superfast cars crash on a regular basis. With robocars, so long as nobody is on board and nobody gets hurt, the risk can be minimized to the point where it’s possible to bring the racing dynamic back. “It’s about nimbleness, not conservatism,” Anderson says.

The hope is that, some day, their 1/16 size cars will be able to scale up. “Is what we’re doing here with Raspberry Pi boards and open-source software actually relevant to full-sized cars?” Anderson asks. “We don’t know,” he says candidly.

But if the path that the drone industry has taken is an indicator of what is to come with cars, and Anderson clearly believes to some extent it is, then all that effort from not just large-scale companies but DIY enthusiasts too is bound to show up in our driverless future.