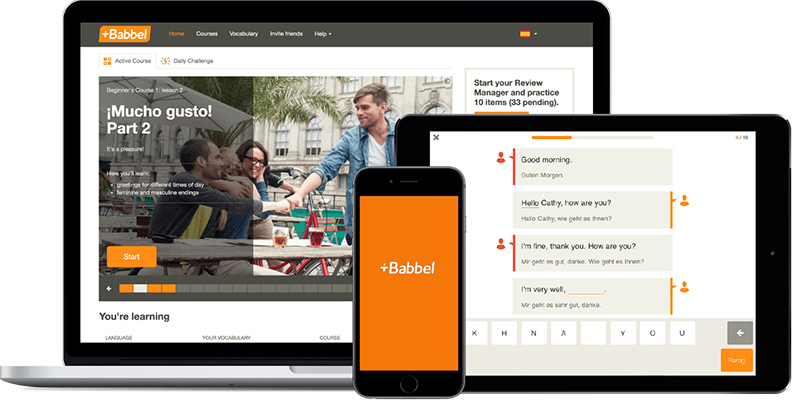 Whether you’re adventuring through an unfamiliar  country or closing an overseas business deal, there’s no question that in our increasingly globalized world, conversation is key. And while functional multilingual AI transactions are likely on the technological horizon, when it comes to forging meaningful connections across cultures, true personal communication is essential. As Nehal Shah, director of engineering at Babbel, puts it, AI is “growing rapidly, evolving at a tremendous pace, but there’s still no replacement for human interaction or that human element.” Especially when it comes to picking up a new language, humans simply need to connect.

Babbel has taken on the challenge of providing that human connection, in digital form, through its nimble, user-friendly app, which supplies language instruction in fourteen languages from around the globe. “For us, the human element is the one that really drives the products more than anything,” notes Shah. “I think people are very playful creatures. If you give them something they can play with, they become engrossed in it, and they want to stay with it.” To that end, Babbel curates lessons developed by experts in the field of language learning, all voiced by native speakers of the languages offered and supplemented by voice recognition capabilities. This allows Babbel to create an immersive experience aimed at optimizing dialogue skills, bolstering vocab retention, and maintaining a steady learning curve. Put another way, Babbel’s method is interactional rather than purely transactional. “With other apps, you learn words, but you don’t learn to speak the language,” explains Shah. “We’re trying to get people to speak the language as you would if you were going down the street, if you were in a restaurant, or if you were going shopping.”

To accomplish all this, Babbel leverages its employees’ wide-ranging skill sets and keeps its company values front and center throughout the development process. “When you’re building a product, you have to often connect the dots between different expertises. At Babbel, it’s a great crucible for connecting those dots,” says Shah. “We have a didactics department that’s 150 strong and essentially are language experts. There’s a lot to learn from them.” Babbel embodies an open approach to product development as a way to stay at the forefront of the language-learning field. According to Shah, “We do a lot of user research. We quite often don’t know what works and what doesn’t. So, I think we sort of err on the side of just getting it out there and getting people using it. If it works, great. If it doesn’t, let’s try and tinker with it to make it work better.”

Shah himself exemplifies the learning spirit embraced by Babbel. “That cultural piece is what makes a company, and what makes people really dedicated to the mission of the company,” he explains. Since moving to Berlin, Babbel’s home base, three years ago, Shah has been getting to know the city, the culture, and the language. “I’m still learning German; I‘ll probably focus on that for now,” he says. And Shah certainly understands the best way to do just that. “Berlin, especially when it’s warm outside, has this special energy, especially when people are out and about.”