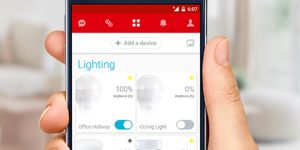 Lisbon is stepping up its game when it comes to attracting startups. Following the country’s $83 billion bailout by the European Union in 2011, the city—now in its second year of hosting the popular European tech conference Web Summit—is welcoming back the youth that fled the city during the downturn and encouraging new entrepreneurship with the emergence of incubators like Startup Lisboa and co-working spaces like the Beato Creative Hub.

One startup to rise out of the Lisbon scene is data analytics company Muzzley. Founded by Domingos Bruges and Eduardo Pinheiro in 2014, and later joined by Sasha DeWitt as co-founder and COO, the startup creates behavior profiles by taking Internet of Things data from home devices, like the Nest Thermostat or Philips Hue Lightbulb, and funneling it through their platform. They then work with insurers, telecoms, and other B2B companies to provide them with deeper insight into their customers.

Bruges says that Lisbon is ripe with engineering talent, especially given its lower cost of living—especially when compared with San Francisco or New York. Being based away from Silicon Valley has also not prevented the Muzzley team from raising capital from U.S. investors. (That said, the company does have additional offices in Redwood City, Calif. and soon, New York, that will focus on sales and marketing.) Instead, the challenge with fundraising was finding investors who believed in the team and in the company vision, because they were proposing to build a model that would not be monetized until two or three years later.

Starting off in Lisbon also helped the company in an unexpected way, says Bruges. Noting that the European government has been particularly concerned about their citizen’s privacy and data, Muzzley had to make sure they were compliant with the EU’s General Data Protection Regulation (GDPR). However, now that they’re trying to break into the U.S. market, “Everyone that we talk to tells us that if we’re already following European regulations, then we’re all good,” says Dewitt. “It was a benefit in disguise.”

Looking back, Bruges and Dewitt say that one mistake they’ve had to learn from is being open to more help from outsiders. “Founders are very, very sure that they know almost everything,” says Bruges. “So it’s important to be surrounded by the right technical or business people to really leverage their knowledge. I wish I had been more open to these mentoring and advisory relationships in the beginning; it would have saved us some time.”

In particular, Bruges cites recruiting as an area where they need to leverage their networking and the mentors they’re now working with. “When you have a small team like ours and not much of a recruiting budget, you have to rely on the network of your investors and mentors to connect you with the best talent out there,” he says.