In our digital world, as the popularity of online dating platforms and websites continues to grow, so too does the threat from scammers, bots, and other bad actors. ICONY GmbH, a white-label dating platform based in Germany, helps address this issue by rigorously validating users — allowing its business partners to launch their services with a database of reputable and up-to-date profiles already in place.

Today, more than 200 media companies partner with ICONY to create dating platforms under their own brands and/or domains. For each partner, ICONY sets up the look and feel of the platform and also manages its day-to-day operation — handling everything from additional application development, to editorial and customer support, to monthly billing of premium memberships and issuing credits to partners. ICONY also provides partners with a transparent backend showing daily behavior, user conversions, and sales generated on the platform.

Having a community of real, active users — not bots or fake accounts — is critical to the success of any dating platform, and so far more than 1.5 million people have registered with ICONY and its partners. Maintaining the trust of these individuals is of the utmost importance, which is why ICONY continually invests in new methods to detect and remove fraudulent profiles from the network. This leads to a better user experience, fewer abuse reports, and higher retention.

Initially, like many other online platforms, the ICONY support team relied on abuse reports to identify fake users and scammers, and then added internal rules and had members of the team review sign-ups. Recognizing and adjusting to the changing strategies by bad actors was a constant struggle, however. Each time a new type of fraudulent behavior appeared, the support team needed to manually create a new rule to address it — a very time-consuming endeavour that could not be scaled up and sustained. To solve this problem, ICONY decided to take a more sophisticated approach to fraud detection, using machine learning and the Amazon Fraud Detector service.

Amazon Fraud Detector provides everything that’s needed to build, deploy, and manage fraud detection models. To train the model, they used ICONY’s historical data of legitimate accounts, as well as the fraudulent accounts the support team had previously identified. Together with other AWS services, ICONY was able to create a bespoke fraud detection solution that did not require in-house machine learning expertise. After a few days of planning and discussion, the coding and integration of fraud detection on the platform was completed in just two days.

The following two diagrams show the high-level overview of the solution: 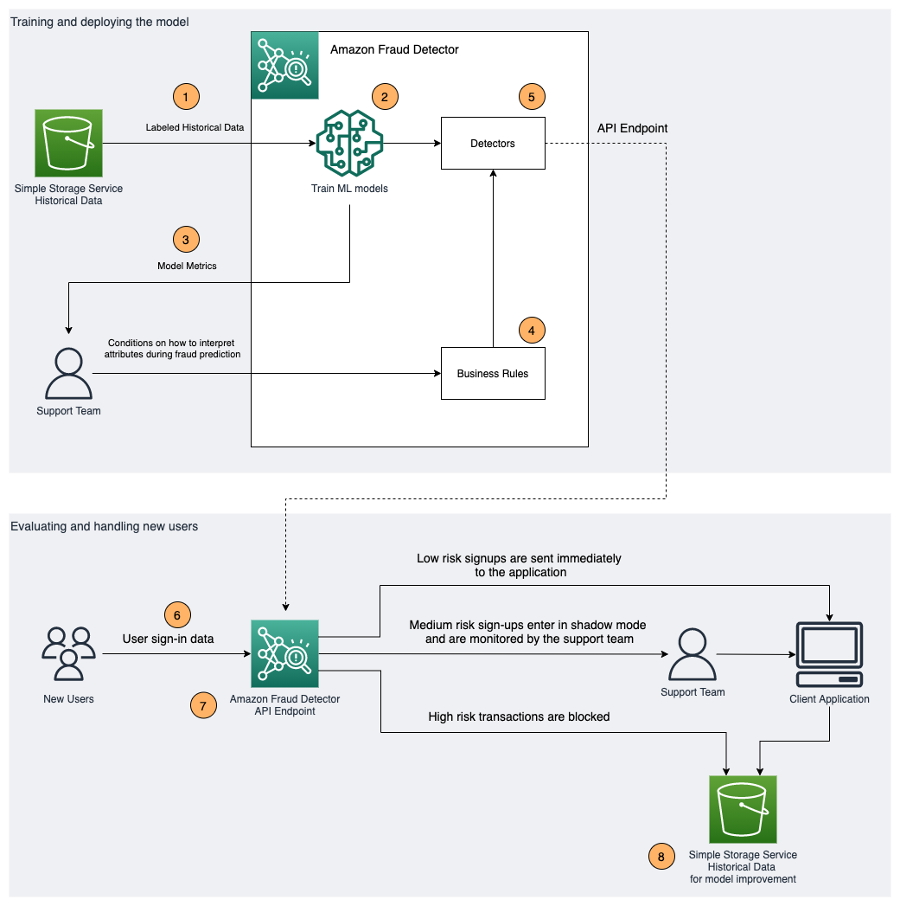 The implementation is divided into two steps: training and deploying the model, and evaluating and handling new users. The steps are as follows:

After implementing this fraud detection solution, the ICONY support team saw the time they spent dealing with fake and spam accounts fall by 77%. This freed up the team to deal with individual user checks, which immediately improved quality on the platform and caused fraud reports from the community to drop by 63%. Moreover, the number of registered users returning to the platform has increased 4.13%. With less harassment from fake accounts and scammers, users feel more comfortable on the platform and enjoy using it.

These numbers highlight just how effective Amazon Fraud Detector can be in reducing the burden on the support team and improving the overall user experience, allowing ICONY to provide the best possible platform to its business partners. We hope this will inspire other teams to explore machine learning-based fraud detection using Amazon Fraud Detector.