Keeping multiple copies and versions of data is a tried-and-true security and data protection protocol. In the event that one version is harmed or corrupted, another is ready as a backup. While increased security with multiple versions and copies is a plus, the added storage costs of (purposefully) redundant data must be carefully considered. It can often be difficult to manage the costs of such a versioning operation.

Amazon S3 Versioning protects your data from accidental overwrites or deletions by keeping multiple variations of an object in the same bucket, which is really useful for security and data protection. However, what if you were concerned about costs and decide not to use S3 Versioning?

On Amazon S3, uploading an object with the same key will result in an overwrite. So, it will definitely decrease the storage cost of future uploads, since S3 will keep only the latest object version. However, in the case of human errors, such as uploading the same key to an existing object, the existing object is overwritten, hence removing it. There is no way to recover permanently removed objects. That is why customers are advised to enable versioning in the Amazon S3 security best practices.

Find bytes of noncurrent versions that are taking storage costs

Now let’s create an S3 Lifecycle rule to keep only a specific number of object versions. We make a rule that deletes noncurrent objects after one day of being noncurrent in order to save on storage costs. However, there are some possible situations in which we must look for a noncurrent version; for instance, if the latest version of the object is a corrupted file. Therefore, we will make an exception to retain two newer versions for data safety.

We limit the scope to a specific Prefix, images/, by using the filter prefix instead of applying it to the entire bucket.

The next menu displays two fields.

To specify the shortest possible time an object stays in the bucket, enter “1” in Days after objects become noncurrent. To keep only the two newest noncurrent versions, specify “2” in Number of newer versions to retain. Depending on your use case, you may adjust those numbers.

After filling in the previous fields, a new screen will display what will happen to objects satisfying this lifecycle rule.

Once you have confirmed your settings, go ahead and create this rule by selecting Create rule. 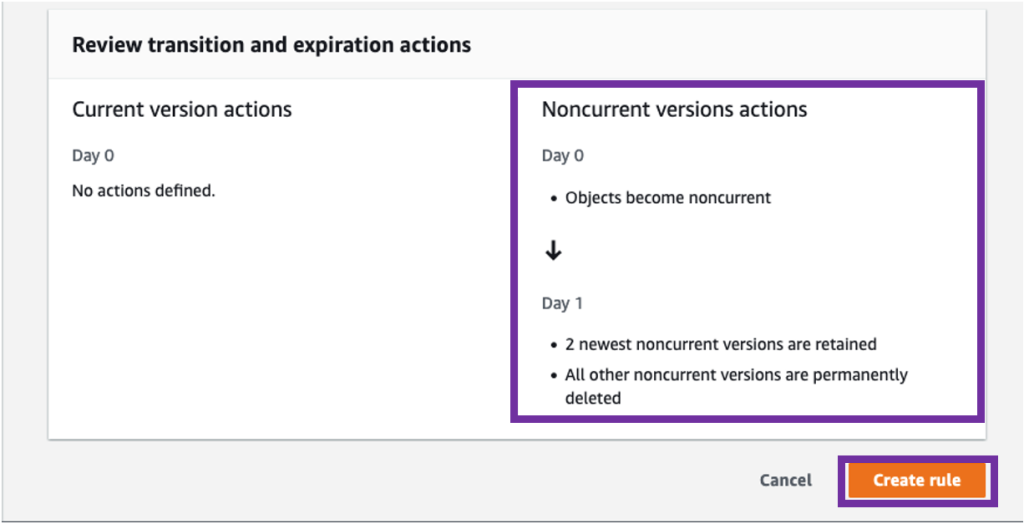 What happens after the new S3 Lifecycle rule is created?

Thanks for reading about Amazon S3 storage cost optimization on versioning enabled bucket. If you have any comments or questions, leave them in the comments section.