At re:Invent 2019, AWS announced AWS Fargate for Amazon EKS, which is serverless compute for containers. Then, in January 2020, AWS announced a price reduction of Amazon EKS  by 50% to $0.10 per hour, per cluster. These developments, coupled with realization of management and cost overhead of Kubernetes control plane operations at scale, made more customers look into migrating their self-managed Kubernetes clusters to Amazon EKS.

The “how” of this migration is the focus of this blog.

For most customers migrating from self-managed Kubernetes clusters on Amazon EC2 to Amazon EKS can usually be accomplished with minimal or no downtime. However, for large clusters involving hundreds of nodes and thousands of pods, this requires more planning and testing, and it is recommended to engage AWS Support for guidance.

There are certain considerations to ensure a successful Amazon EKS migration and operational excellence.

2. If using an existing VPC and subnets to host Amazon EKS cluster:

3. If your pods are currently accessing AWS resources, and if you would like to use IAM roles for service accounts, then:

4. If you are planning to use AWS Fargate to run your pods, you need to create the appropriate Fargate Profile and pod execution role.

If you have an entire domain migration that you would like to smoothly migrate, you can take advantage of Amazon Route 53’s Weighted Routing (as shown in the following diagram). With Weighted Routing, you are able to have a progressive transition from your existing cluster to the new one with zero downtime by splitting the traffic at the DNS level.

Your customers are slowly being transferred to your new cluster as their cached TTL expires. The split could start with a small share of your customers, for example, 10% being pointed to the new Amazon EKS cluster and 90% still on the old one. As soon as traffic is confirmed to be working as expected on the new cluster, that percentage of clients pointed to the new one can be increased. 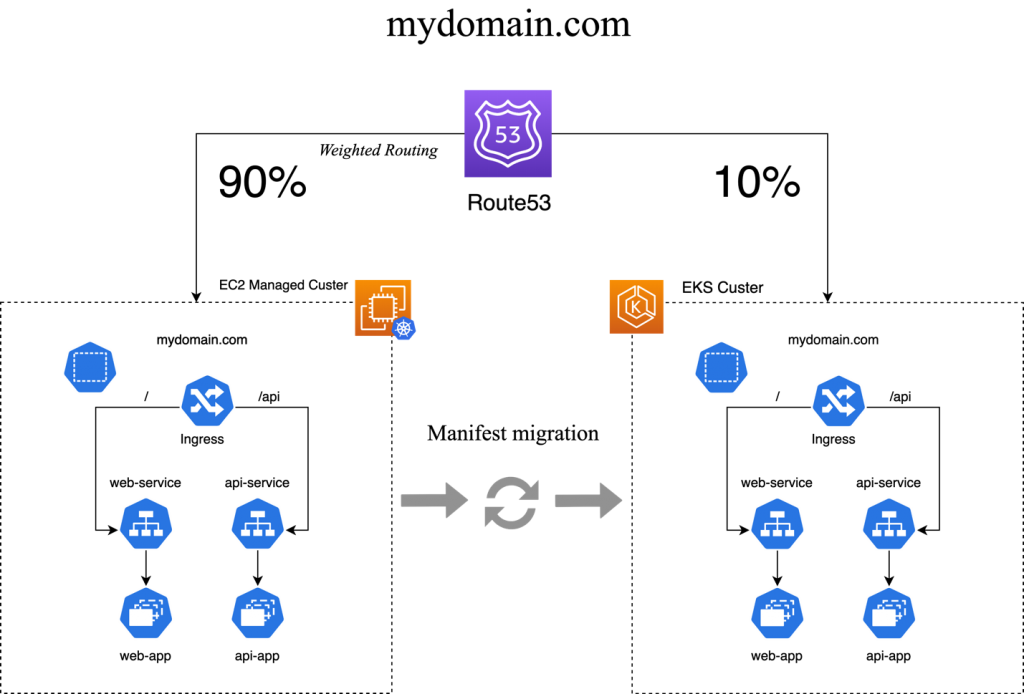 This implementation is flexible, it can be tied to Load Balancers, EC2 Instances, and even to external on-premises infrastructure.

In this blog post, we showed how to migrate your live-traffic serving self-hosted Kubernetes Cluster to Amazon EKS. Amazon EKS offers a cost-effective and highly available option for running Kubernetes clusters in the cloud. Since Amazon EKS is upstream Kubernetes compliant, you can migrate existing self-managed Kubernetes workloads to Amazon EKS, with multiple options to minimize or avoid service disruption. To create your first Amazon EKS cluster, visit Getting started with Amazon EKS.