This post is written by Mark Richman, Senior Solutions Architect.

Amazon Managed Workflows for Apache Airflow (MWAA) is a fully managed service that makes it easier to run open-source versions of Apache Airflow on AWS. It allows you to build workflows to run your extract-transform-load (ETL) jobs and data pipelines.

When working with MWAA, you often need to know more about the performance of your Airflow environment to achieve full insight and observability of your system. Airflow emits a number of useful metrics to Amazon CloudWatch, which are described in the product documentation. MWAA allows customers to define CloudWatch dashboards and alarms based upon the metrics and logs that Apache Airflow emits.

This blog demonstrates a solution that automatically detects any deployed Airflow environments associated with the AWS account. It builds a CloudWatch dashboard and some useful alarms for each. All source code for this blog post is available on GitHub.

You automate the creation of a CloudWatch dashboard, which displays several of these key metrics together with CloudWatch alarms. These alarms receive notifications when the metrics fall outside of the thresholds that you configure, and allow you to perform actions in response.

Based on AWS serverless services, this solution includes:

EventBridge, a serverless event service, is configured to invoke a Step Functions workflow every 10 minutes. You can configure this for your preferred interval. Step Functions invokes a number of Lambda functions in parallel. If a function throws an error, the failed step in the state machine transitions to its respective failed state and the entire workflow ends.

Each of the Lambda functions performs a single task, orchestrated by Step Functions. Each function has a descriptive name for the task it performs in the workflow.

You can see this definition in the GitHub repo:

When this Step Functions workflow runs, it runs CreateDashboardFunction. This iterates through all the MWAA environments in the account, creating or updating its corresponding CloudWatch dashboard. You can see the code in /functions/create_dashboard/app.py:

Here is a visualization of the Step Functions state machine:

Building and deploying the example application

To build and deploy this solution:

This command packages and deploys the application to your AWS account. It provides a series of prompts:

The CloudWatch dashboard template definition is stored in DynamoDB. This is a one-time setup step, performed by the functions/seed_dynamodb Lambda custom resource at stack deployment time.

Here, <dynamodb-table-name> is the name of the DynamoDB table created during deployment. For example:

Viewing the CloudWatch dashboards and alarms

If you have any existing MWAA environments, or create new ones, a dashboard for each appears with the Airflow- prefix. If you delete an MWAA environment, the corresponding dashboard is also deleted. No CloudWatch metrics are deleted.

Upon successful completion of the Step Functions workflow, you see a list of custom dashboards. There is one for each of your MWAA environments:

Choosing the dashboard name displays the widgets defined in the JSON described previously. Each widget corresponds to an Airflow key performance indicator (KPI). The dashboards can be customized through the AWS Management Console without any code changes. 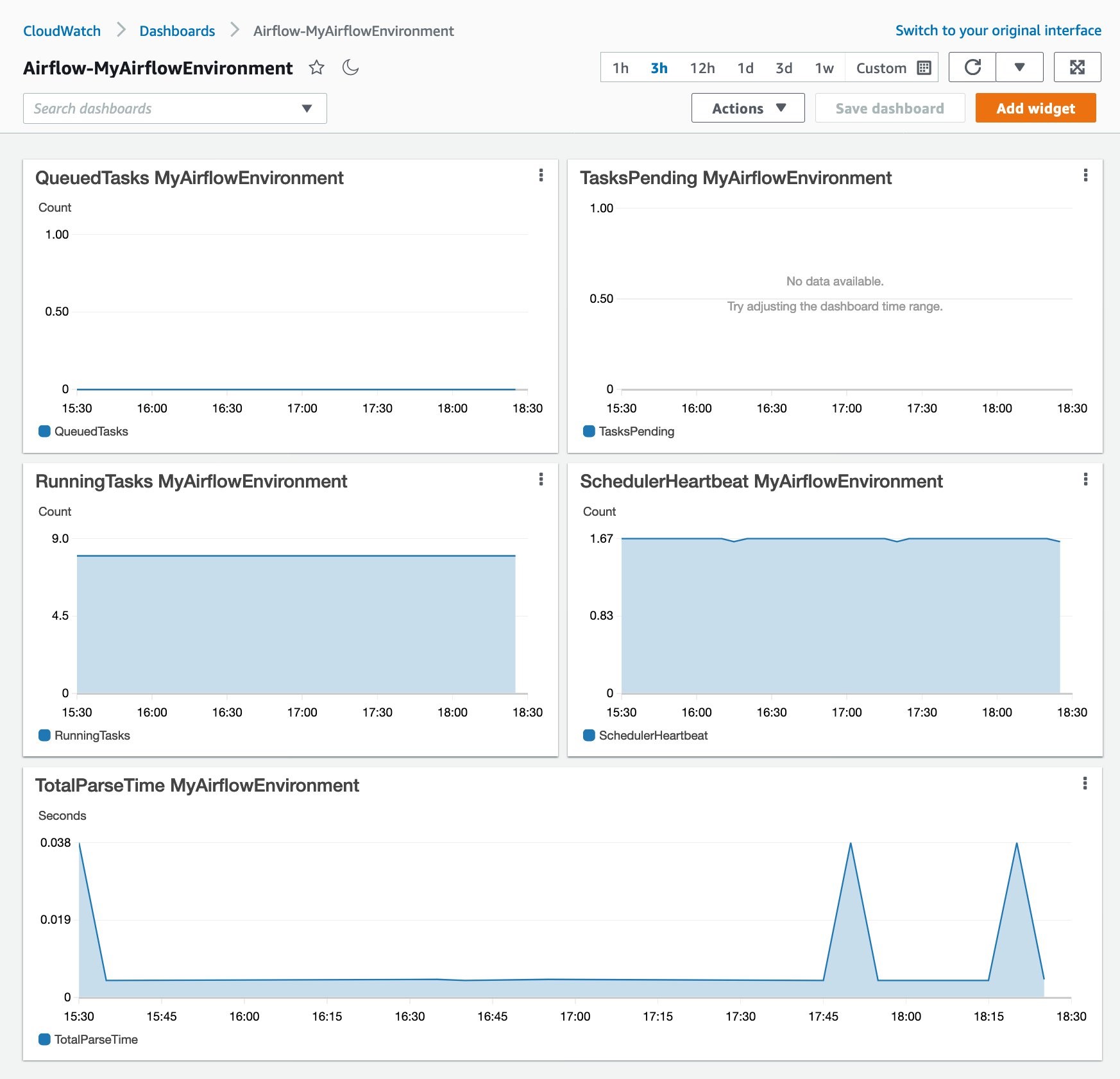 These are the metrics:

More information on all MWAA metrics available in CloudWatch can be found in the documentation. CloudWatch alarms are also created for each MWAA environment:

By default, you create two alarms:

You can configure actions in response to these alarms, such as an Amazon SNS notification to email or a Slack message.

After testing this application, delete the resources created to avoid ongoing charges. You can use the AWS CLI, AWS Management Console, or the AWS APIs to delete the CloudFormation stack deployed by AWS SAM.

To delete the stack via the AWS CLI, run the following command:

With Amazon MWAA, you can spend more time building workflows and less time managing and scaling infrastructure. This article shows a serverless example that automatically creates CloudWatch dashboards and alarms for all existing and new MWAA environments. With this example, you can achieve better observability for your MWAA environments.

To get started with MWAA, visit the user guide. To deploy this solution in your own AWS account, visit the GitHub repo for this article.