This post was written by Robert Zhu, Principal Developer Advocate at AWS.

This article continues a blog I posted earlier about using Load Balancers on Amazon Lightsail. In this article, I demonstrate a few common challenges and solutions when combining stateful applications with load balancers. I start with a simple WebSocket application in Amazon Lightsail that counts the number of seconds the client has been connected. Then, I add a Lightsail Load Balancer, and show you how the application performs routing and retries. Let’s get started.

WebSockets are persistent, duplex sockets that enable bi-directional communication between a client and server. Applications often use WebSockets to provide real-time functionality such as chat and gaming. Let’s start with some sample code for a simple WebSocket server:

I use the WebSocket DOM API to connect to the server. Once connected, I append any received messages to console and on screen via the custom appendMessage function. If the client loses connectivity, it will try to reconnect up to 50 times. Let’s run it:

Now, suppose I am running a very demanding real-time application, and need to scale the server capacity beyond a single host. How would I do this? I create two Ubuntu 18.04 instances. Once the instances are up, I SSH to each one, and run the following commands:

During installation, select Yes when presented with the prompt:

Keep these SSH sessions open, you need them shortly. Next, you create the Load Balancer in Amazon Lightsail, and attach the instances: 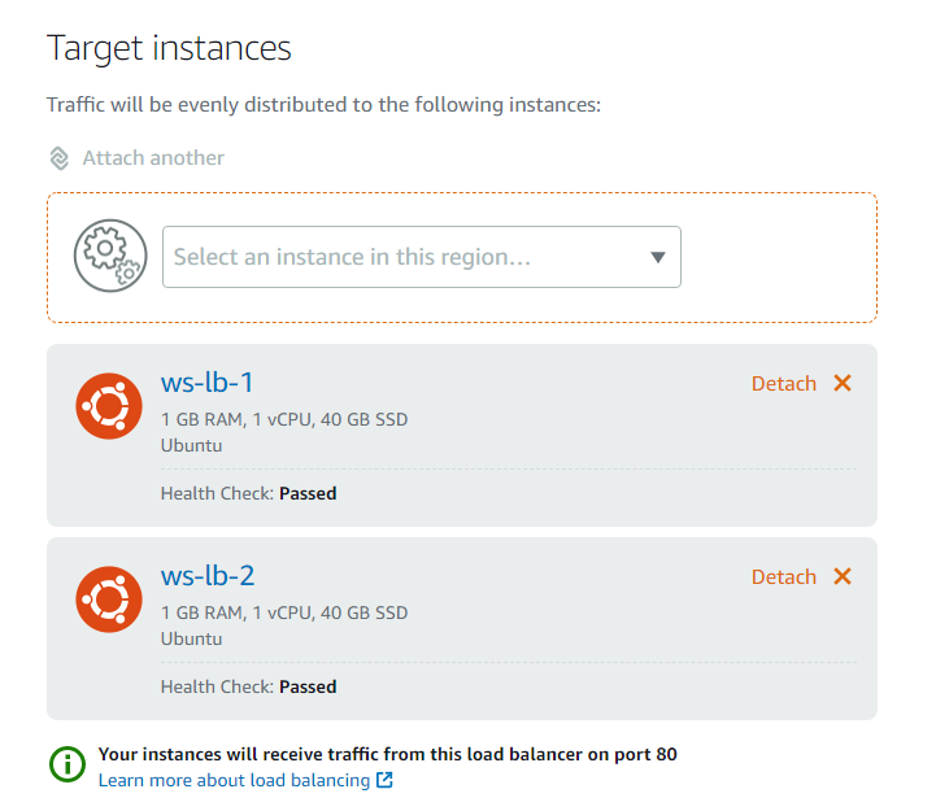 Note: the Lightsail load balancer only works for port 80, which is part of the reason I use the same port for HTTP and WebSocket requests.

Copy the DNS name for the load balancer, open it in a new browser tab, and paste it into the WebSocket server address with the format:

Make sure the server address does not accidentally start with “ws://http://…”

Next, locate the SSH session that accepted the connection. It looks like this:

The server logs the client ID when it receives a connection.

If you kill this process, the client disconnects and runs its retry logic, hopefully causing the load balancer to route the client to a healthy node. Next, hit connect from the client. After a few seconds, kill the process on the server, and you should see the client reconnect to a healthy instance:

The client retry was routed to a healthy instance on the first attempt. This is due to the round-robin algorithm that the Lightsail load balancer uses. In production, you should not expect the load balancer to detect an unhealthy node immediately. If the load balancer continues to route incoming connections to an unhealthy node, the client will need more retry attempts before reconnecting. If this is a large scale system, we will want to implement an exponential backoff on the retry intervals to avoid overwhelming other nodes in the cluster (aka the thundering herd problem).

Notice that the message “you have been connected for X seconds” reset X to 0 after the client reconnected. What if you want to make the failover transparent to the user? The problem is that the connection duration (X) is stored in the NodeJS process that we killed. That state is lost if the process dies or if the host goes down. The solution is unsurprising: move the state off the WebSocket server and into a distributed cache, such as redis.

When you attached your instances to the load balancer, your health checks passed because the Lightsail load balancer issues an HTTP request for the default path (where you serve index.html). However, if you expect most of your server load to come from I/O on the WebSocket connections, the ability to serve our index.html file is not a good health check.  You might implement a better health check like so:

When working with persistent connections or sticky sessions, always leave some capacity buffer. For example, do not mark the server as unhealthy only when it reaches 100% capacity. This is because existing connections or sticky clients will continue to generate traffic for that node, and some workloads may increase server usage beyond its threshold (e.g. a chat room that suddenly gets very busy).

I hope this post has given you a clear idea of how to use load balancers to improve scalability for stateful applications, and how to implement such a solution using Amazon Lightsail instances and load balancers. Please feel free to leave comments, and try this solution for yourself.