Amazon AppStream 2.0 recently added a new feature called Managed Image Updates, which significantly reduces the effort required for customers to keep their images up to date.

Software patching is critical for the security and performance of compute resources. Frequent patching is listed as a best practice in the Security Pillar of the Well-Architected Framework.

Let’s examine the four categories of software that require patching on an AppStream 2.0 image. We’ll also describe how each category has traditionally been updated:

With the release of Managed Image Updates, you can now choose to allow AWS to handle a greater portion of the maintenance process. This feature automatically brings an image to the latest baseline for both software components and Windows updates. Managed Image Updates takes your existing image, performs the update operation, and outputs a new image. You can then test the updated image before deploying it to your production fleets.

Let’s walk through the high-level steps you can follow to use Managed Image Updates for your existing images.

There are several prerequisites to consider before you attempt to use Managed Image Updates. It’s recommended that you manually install the latest version of SSM agent before performing an update operation. The SSM Agent is used for orchestrating the image update process. All prerequisites are in the administration guide on how to update an image by using managed AppStream 2.0 image updates.

To update an image, you specify the image to be updated, and provide a name for the new image that will be generated. AppStream 2.0 will start an image builder instance in your account to perform the update. This image builder will be automatically terminated when the update process has completed. Your AWS account will be billed for this image builder usage.

You can start an update operation either programmatically (for example, using the AWS Command Line Interface), or via the AWS Management Console.

The output should include an image builder with a state of UPDATING . The name of the image builder starts with the <NEW_IMAGE_NAME> you selected, and ends with a random 10-character suffix.

The update process can require several hours to complete in some cases. If there is a failure, the new image will have a Status of Failed, and you should review any errors in the Notifications tab.

Viewing updates on the new image 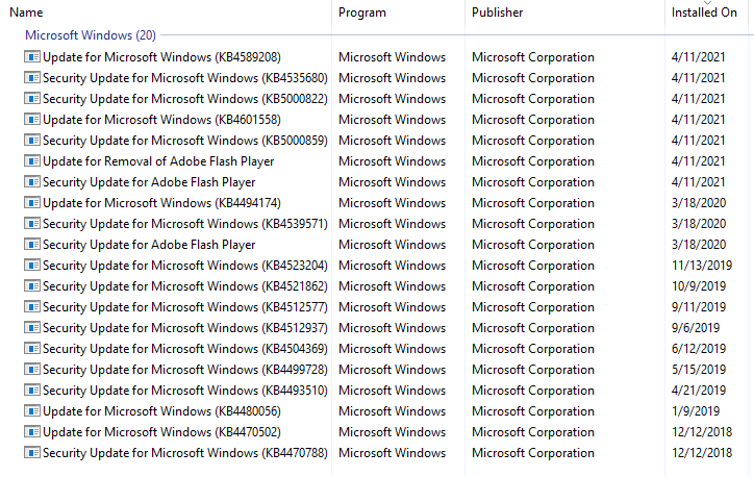 You can validate that other included software components (such as drivers and agents) were updated as well. To view, choose Control Panel -> Programs -> Programs and Features

Managed Image Updates is a new feature that significantly reduces the maintenance burden of image updates for AppStream 2.0 customers.

Managed Image Updates takes your existing image and generates a new image that meets the baseline established by the latest base image. It automatically installs Windows updates. You are still responsible for updating your own software and any associated dependencies.