In order to efficiently enhance cloud operations, Dream11 worked closely with Enterprise Support – the highest-level support offered by AWS – to optimise the cost of their infrastructure hosted on AWS Cloud. The Technical Account Manager (TAM) from Enterprise Support provided guidance on multiple strategic initiatives and suggested migrating the workloads from Intel to Graviton2 processor instances.  AWS had launched the Graviton2 processor at its annual event re:Invent 2020. It provides performance benefits that meet the Dream11’s expectations at a 40% lower price point. Graviton2 has a different set of processor instructions and we wanted to test the feasibility of deploying applications on it.  We further engaged with the TAM to identify the application which is less critical in nature for business but has a higher potential for cost optimization. After a series of discussions, we decided to choose a self-managed service spark for migrating to the Graviton2 processor. This spark cluster is a CPU and Memory intensive application which makes it a perfect candidate for moving to Graviton2 processor type to test the performance and benchmark against the intel-based processor.

In this blog, we will walk you through the architecture of the PDF service Spark used on Dream11, explaining the significance of each tier and they interact with each other. Then, we will explain the migration approach, the challenges faced by Dream11 and how Graviton2 came to the rescue in our cost optimization journey.

In line with Dream11’s FairPlay policy, before a fantasy sports contest begins, users can download a PDF document that includes details of other users and their teams who are participating in that particular contest. We use a self-managed PDF service Spark cluster to generate the PDF file.

The below diagram depicts the architecture of the PDF service Spark cluster. 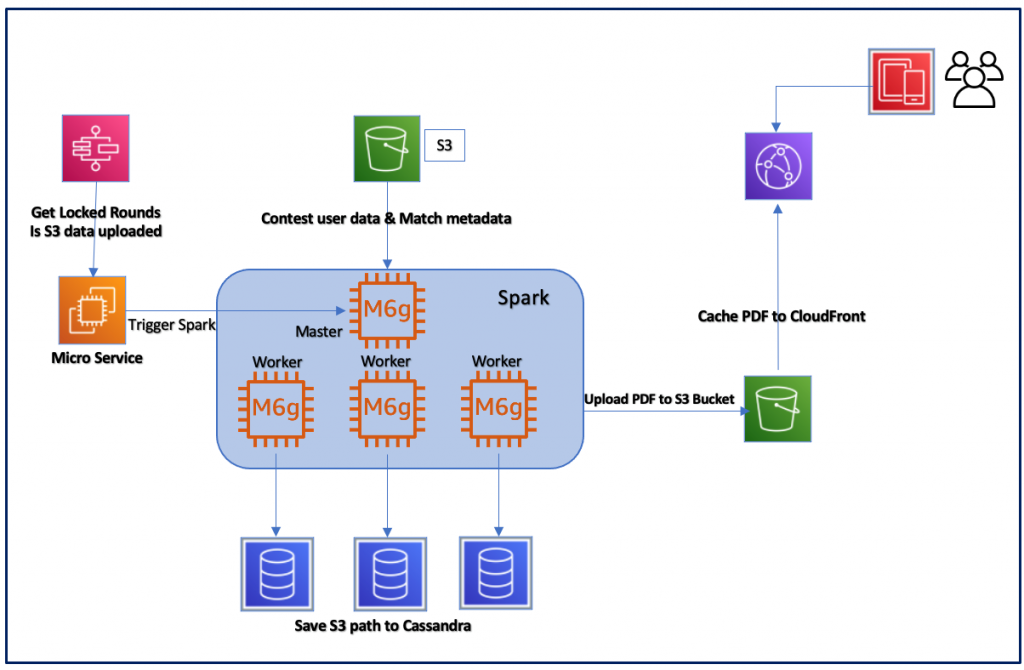 Explanation of data flow and Architecture:

As depicted in the diagram, we use STEP functions to trigger a Spark to read the contestant details and their team details from S3 bucket. Spark generates the PDF file using these details and stores it back in the S3 bucket, making it available for its download to fantasy sports through CloudFront.  Additionally, these details are written to the Cassandra database, where point calculations take place for Leader Board functionality. This keeps on changing based on the performance of the on-field players during the game. The leaderboard determines the winner with the highest number of points at the end of the contest. Initially, the Spark cluster was running on m4.4xlarge instance type. Later, it was migrated to m6g.4xlarge instance type.

Graviton2 is an ARM-based processor which has a different set of processor instructions. Making application compatible with the Graviton2 was another challenge, therefore, to reduce the Kernel / OS level Library compatibility challenge, we planned to upgrade from CentOS 7 to CentOS 8. Additionally, we also applied the latest OS security patches to reduce the vulnerability of the systems. Due to application dependency, we decided to use jdk-8u301-linux-aarch64.rpm on Graviton2 processor. In terms of packages, we also needed to upgrade GCC library to the latest version as it is not available as a default CentOS 8 repository. The rest of the migration was seamless for running the application on Graviton2 processor.

We decided to carry out the performance benchmarking with the concurrency number of 5.5 million users on Intel vs Graviton2 instances.

Table 1 – Intel vs Graviton 2 processor comparison for 80 number of both instance type.

Table 2 – Intel vs Graviton 2 processor comparison for 80 of intel and 60 of graviton instances.

We concluded the load test as a success and decided to move the PDF Service Spark application into the production environment. We deployed it before the IPL 2021 and used it throughout the tournament. We did see improved performance in the PDF generation process due to the usage of Graviton processor throughout the tournament as compared to the previous IPL seasons when the Spark cluster was running on an Intel-based processor.

Overall, it took about three weeks to deploy the application in the production environment. For the initial staging setup, we took one week for infra deployment on AWS cloud. In the staging environment, we successfully carried out the code changes and functional testing. Next, a whole week was spent on load testing.  We tested with the concurrency of 5.5 million users and examined all the edge cases successfully to ensure there were would be no glitches when the application goes live in production. After a successful load test, we were confident of using Graviton2 processor for the PDF Service Spark application.

By the third week, we moved the application to the production infra setup. To start using the application in a production environment, we shifted a few of the low impacted rounds to a new architecture for a couple of days along with a backup strategy of running it on an Intel-based processor.  As expected, we did not encounter any issues and decided to run all the rounds on the new application stack, on Graviton2. No issues or failures surfaced during the process.

The Graviton2 processor provides a much better price and performance as compared to Intel-based processors.  Dream11 deployed the PDF Service Spark application on the m4.4xlarge instance type. To serve at a scale of 120+ million users and a user concurrency of over 5.5 million, we expanded our cluster to deploy 80 instances of m4.4xlarge. We also realized that just by migrating from Intel to Graviton2 processor, we saved around $10,746 (23%) of computing cost per month.

During the load test, we found that Graviton2 instances have better processor performance which allowed us to reduce the number of compute instances further by 25%. So, we carried out the test with 60 instances of m6g.4xlarge. This reduced the overall computing cost by $19,739 each month (42%).

The project was so successful for Dream11 that we have already planned to replicate this to other applications by migrating them to Graviton2 processor for price and performance benefits.

After successful test runs at Dream11 scale, their Developers and DevOps teams were encouraged to adopt Graviton2 for cost and performance optimisation. We carry on with the load test and figured out that the CPU utilization on Graviton2 based instances were far less than the intel based instances.  We realized that there is further scope of reducing the compute nodes by 25%,  by decreasing the number of Graviton based instances to 60 nodes without impacting the performance of the PDF generation process. This helped to reduce the overall costs by 42% per month.

Thanks for reading this blog post on the adoption of Amazon Graviton2 instances to save on compute costs. If you have any comments or questions, leave them in the comments section.