For many people, it’s easy to rack up thousands of dollars in personal debt. Lending institutions have invested heavily in the technology behind credit applications, creating convenient online credit application platforms. Getting a personal loan or credit card is as simple as filling in your details into a one-page form and clicking “submit.” In many cases, you get a decision in under a minute. But what about the other side of the coin — does the process for getting out of debt go just as smoothly?

In the fourth quarter of 2020, total U.S. consumer debt stood at $14.5 trillion as reported by the Federal Reserve Bank of New York in the Household Debt and Credit Quarterly Report. Managing and mitigating an issue of this magnitude clearly requires many tools — including the latest and greatest in technology. Enter Credit Genie, a FinTech startup that leverages data and analytics to help borrowers escape the personal debt trap by optimizing their debt to manageable levels. This is the story of Credit Genie, a fast-growing startup and their mission. We’ll talk about how they leveraged AWS Amplify to boost their speed to market and set themselves up for scalable growth.

Back in December of 2019, the Credit Genie team decided to enter the personal debt relief industry to provide technology solutions for debt counseling agencies. While total consumer debt has actually remained relatively stable throughout the pandemic, government stimulus payments, unemployment assistance and payment holidays are not expected to last forever. Over the next few years more Americans than ever will need debt management help, and Credit Genie believes that they should have fast and simple access to debt relief – leveraging much of the same technology that helped them secure their credit.

The fintech platform created by Credit Genie is used to intake consumer financial information and produce an instant financial health assessment. To introduce the platform to market – Credit Genie partnered with the National Foundation for Credit Counseling (NFCC) — America’s largest and longest-standing nonprofit financial counseling organization. Historically, financial counselors from its 50+ member-agencies were still conducting credit counseling interviews by telephone and manually gathering borrowers’ data, which was typically self-reported and unverified. The telephone-based application and consultation process with credit counselors was lengthy and expensive, driving up customer onboarding cost. The manual data collection process was also far from foolproof, in need of improved data controls, and standardization. That’s where Credit Genie came in to the picture. 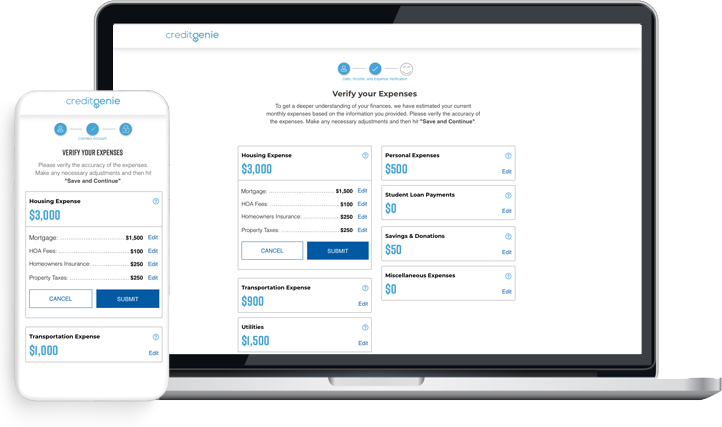 NFCC agencies using the Credit Genie platform have been able to reduce their customer acquisition and operating costs because of increased speed of client onboarding. The Credit Genie platform has also improved accuracy and verification of the borrower information. These benefits have created more productive financial counseling sessions for the agency and their clients.

Credit Genie was started by Ed Harycki who runs the company as CEO. Harycki is an experienced executive in financial services and was the former founder and CEO of Swift Capital – which was acquired by PayPal in 2018. In the beginning, Harycki started with a small team of experienced developers and engineers that worked with him at PayPal. The team knew that AWS was the cloud of choice for their MVP, based on the strength of AWS security measures.

We spoke with Alex Kates, one of the first software architects at Credit Genie, who described the early days and discovery of AWS Amplify, a solution that helps front-end and full stack web and mobile developers build scalable applications, powered by AWS. Building the MVP quickly was a top priority for Kates and his colleague, Anthony Briglia, also a software architect. They had pulled together a small team of front-end engineers who worked with them at PayPal. When the Credit Genie team started researching building serverless on AWS, they had not heard about AWS Amplify. But as the team researched it further, “we knew it was a game-changer” said Kates. “We found Amplify and played around with it on a weekend, and thought ‘wait a second, you can go from File, New Project to a real production-grade system in minutes.’ From certificate management, hosting, and CloudFront automation — all the pieces were there.” Kates said using Amplify to build their MVP became a no-brainer.

Leveraging AWS Amplify’s comprehensive solution, Credit Genie was able to build a proof-of-concept for a 5-page consumer-facing application in under one week. Credit Genie continued building out its web app, now a full-fledged platform that collects borrower data from integrations using Plaid and TransUnion — offering interfaces for both borrowers and counselors to input additional information.

The Credit Genie platform is built using React and Tailwind for its frontend, and the back-end architecture currently uses AWS AppSync, Amazon DynamoDB, AWS Lambda, Amazon API Gateway, Amazon CloudFront, Amazon S3 and Amazon SQS, all through Amplify. The developer team achieved an increase in productivity thanks to Amplify’s ease of use through the abstraction of underlying AWS services. “Any time something would hit the sprint board, it was some of the quickest development I had ever seen after 12 years in the industry. The Amplify developer experience is instrumental to the team’s success,” Kates stated.

The majority of Credit Genie’s team is made up of front-end engineers who appreciate the high-level abstractions for working with GraphQL through AWS AppSync, a fully managed service that makes it easy to develop GraphQL APIs by handling the heavy lifting of securely connecting to data sources like AWS DynamoDB and Lambda. The ability to easily consume new fields in a GraphQL API increased their productivity. Kates stated that the front-end engineers were ecstatic that they could get any data they need – since historically they would have to ask a back-end engineer for the data. GraphQL was new for the team but Kates said the ramp up for the team was non-existent since they were using Amplify and AppSync.

Briglia and Kates set up their own unique Credit Genie architecture with Amplify and using AWS organizations. The architecture is constructed so each agency has their own version of the Credit Genie app on Amplify, using the same codebase deployed across multiple accounts. This allows them to segregate the compute and storage used by each agency and facilitates their billing breakdown by agency. They’ve also created a single CloudFront distribution outside of their AWS organization and built a viewer request Lambda that acts as a router to distribute traffic across the Amplify applications associated with separate agencies. They also have an analytics AWS account where the data is diverted into Amazon Redshift where they use the Redshift Spectrum functionality to enable their data science team. They stream all their data continuously throughout the day and the data science and BI team use tools to build fine-grained reports for the NFCC. 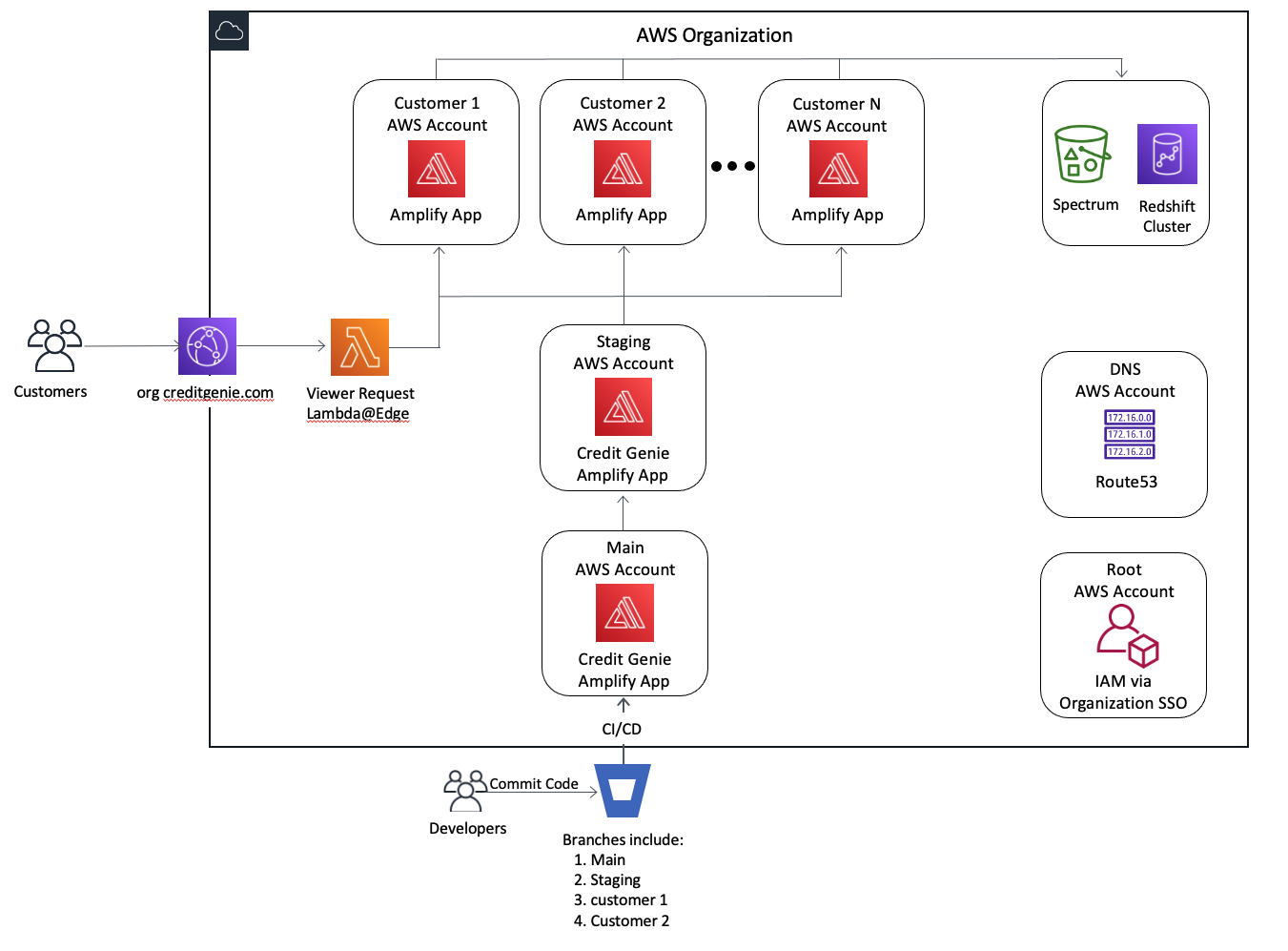 Now that they are beyond the MVP, the developers have found it simple to customize logic where Amplify did not include a solution they needed out-of-the box. Kates recalls, “when we realized that we needed an escape hatch, it was there for us.” The team was able to extend AWS Amplify through custom resources to use queues, powered by Amazon SQS, natively within Amplify.

As a fintech startup that stores customer financial data, Amplify also provides critical data protection. Having been at PayPal previously, Kates feels confident using Amplify because Dynamo DB and S3 are backed by AWS Key Management Service (KMS) which is backed by AWS CloudHSM (HSM) that have been validated under FIPS 140-2. Kates states “We’re able to use these services because they’re FIPS compliant so the financial information is encrypted at rest and in transit with Amplify’s SSL management. You would normally have a team of multiple infosec engineers managing these security concerns alone.”

Bring on the Growth

As the Credit Genie development team continues to expand, Kates is confident that new members will be able to onboard quickly. “Junior folks have been able to make changes within the entirety of the infrastructure by the end of their first year,” reports Kates. Nor will cost be an issue as the startup continues to scale, thanks to Amplify running as an entirely serverless deployment.

Credit Genie now serves the top five NFCC agencies, with plans to support additional member organizations, as well as leading national lenders. Using the Credit Genie platform has reduced the cost of customer acquisition and onboarding for the agencies. The online application saves time and sophisticated cash flow budgeting models create personalized consumer offers. Choosing serverless on AWS and managed services such as AppSync the Credit Genie team can support millions of AppSync requests and tens of thousands of Lambda requests per month— enabling NFCC agencies and other partners to work through higher caseloads, more efficiently. But despite its growth success to date, Kates insists that the company is still “scratching the surface” relative to the massive opportunity presented by the consumer debt situation. 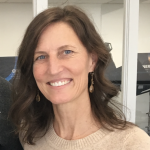