Collecting data in remote oceans with a cost-efficient, scalable, and flexible infrastructure 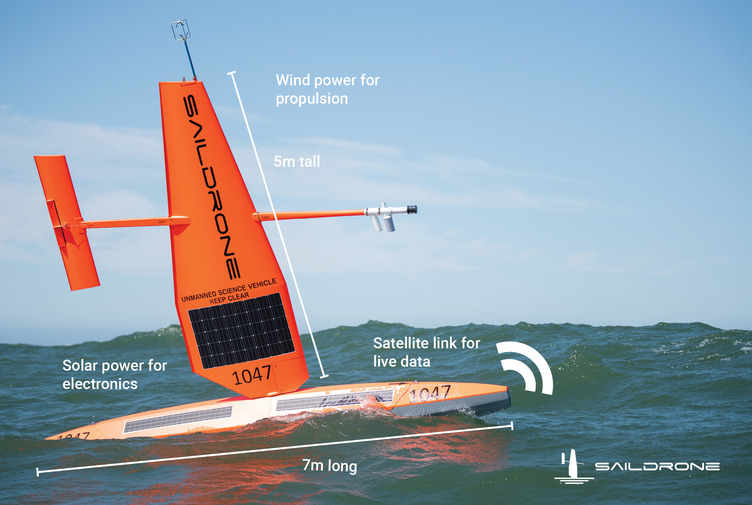 Saildrone builds and operates a fleet of unmanned surface vehicles (USVs) designed to collect high-resolution oceanographic and atmospheric data in remote oceans. Known as saildrones, each vehicle can stay at sea for up to 12 months, transmitting real-time data via satellite. The data collected is used to inform climate models and extreme weather prediction, maritime domain awareness, maps and charts, and sustainable management of resources. Using clean, renewable wind and solar power, saildrones provide access to the world’s oceans at a fraction of the cost of traditional ship-based methods, while drastically reducing the carbon footprint of global ocean observation.

As part of the Amazon Sustainability Data Initiative (ASDI), we invited Jenn Virskus, content manager at Saildrone, to share how Amazon Web Services (AWS) is being used to help improve access and use of the data collected by her organization.

The Southern Ocean plays an important role in regulating heat and carbon for the planet, but it is one of the most data-sparse regions on the planet because of its remote location and extreme weather conditions: freezing temperatures, huge waves, and hurricane-strength winds.

In 2019, Saildrone deployed a fleet of USVs on a mission to complete the first autonomous circumnavigation of Antarctica. The Southern Ocean is so inhospitable that even large ships try to avoid it in the winter, but eight months into its mission, the nimble and robust saildrone (SD 1020) returned safely home after not only surviving the Southern Ocean winter but also streamed back vital new data from previously unsampled territory.

Saildrones carry a suite of science-grade sensors to collect meteorological and oceanographic data critical to understanding the changes taking place in the Antarctic ecosystem: air and sea temperature, wind speed and direction, barometric pressure, humidity, radiation, salinity, wave height and period, speed and direction of ocean currents, and air-sea carbon fluxes. This data provide the ground-based knowledge required to help scientists better understand and evaluate the models used to predict weather and climate, but getting the data to scientists and researchers in a timely manner, especially from remote areas like the Southern Ocean, is a major data challenge.

SD 1020 spent nearly 200 days collecting some 20 variables at a one-second sample rate, generating an enormous amount of data. Downsampled data is available in real time to project collaborators, and the high-resolution raw data is downloaded from the vehicle upon mission completion. Saildrone leverages the AWS Cloud to both store and distribute real-time and high-resolution data.

Saildrone’s open datasets, like that of the 2019 Antarctic Circumnavigation, are publicly available on the Saildrone Data Portal, data.saildrone.com, and on the AWS Marketplace. Members of the science community are invited to download the data, analyze it, and explore the capabilities of the Saildrone platform. Researchers can also use existing AWS compute resources to access and analyze the data, without having to store their own copies.

What next for Saildrone?

Saildrone recently completed two missions in the Arctic: a survey of Alaska pollock in the Bering Sea on behalf of NOAA’s Alaska Fisheries Science Center and a single-beam mapping mission off Alaska’s North Slope for the NOAA Office of Coast Survey. Throughout the month of October, a fleet of saildrones demonstrated how autonomous vehicles could be used to improve maritime domain awareness for the US Coast Guard off the coast of Hawaii. In November, we deployed a saildrone to the North Pacific to test a new type of wing designed for extreme wind conditions to improve hurricane tracking and intensity forecasting.

Learn more about the Amazon Sustainability Data Initiative, and check out other ASDI stories.