New program provides $125,000 cash and up to $100,000 in AWS credits for early stage startups led by Black, women, Latino, and LGBTQIA+ founders, as well as training, mentoring, and technical guidance.

In 2018, Claudius Mbemba (mem’buh), a Black man who grew up in Cameroon before moving to the United States, co-founded his first venture scale business—a managed marketplace app for vacation rental cleaning services called Neu. It gave him firsthand experience of the challenges of navigating the investing landscape. As someone from an underrepresented community, he’s seen how the pool of businesses that receive funding is often homogeneous.

“It’s all about the money flow. As soon as investors and those with access to opportunity start investing in a more diverse range of recipients, then we will start moving in the right direction,” said Mbemba. “It’s a self-fulfilling prophecy. You get access to the capital, which creates incentives for investors to open up their networks to you, which can help your business meet the next milestone, which creates success. When people don’t invest in founders from diverse backgrounds, they’re not creating that momentum and not helping fulfill that prophecy. It comes down to that.”

This funding gap, as well as difficulties accessing training, networking, and mentoring opportunities, are just some of the issues faced by underrepresented founders like Mbemba that Amazon Web Services (AWS) is committed to addressing. It’s why AWS is launching a new AWS Impact Accelerator that commits more than $30 million over the next three years to early stage startups led by Black, women, Latino, and LGBTQIA+ founders.

Each qualifying startup receives up to $225,000 in combined cash and credits, training, mentoring, and technical guidance, as well as introductions to Amazon leaders and teams, networking opportunities with investors, and advisory support. Eligible startups can now apply to the first of these program, the AWS Impact Accelerator for Black Founders.

“I’ve been in situations and cohorts where people tell me it’s so easy to raise money,” said Mbemba. “And I’m thinking, ‘That’s not the experience I’m having.’ Friends and family investing doesn’t work for me. I don’t have people who can just invest $100,000 to get my business off the ground.”

To put this into perspective, studies consistently show that Black, women, Latino, and LGBTQIA+ startup founders are underrepresented across the total number of founded and funded startups. In 2021, U.S. startups founded solely by women raised nearly $6.4 billion in venture funding, according to PitchBook data. But that number only accounts for 2% of overall investment dollars that year, which was $330 billion. For example, according to StartOut, an organization that supports LGBTQ+ entrepreneurs, if everyone had equal access to funding and resources, there would be 10 times more LGBTQ+ entrepreneurs in the U.S.

We spoke to Mbemba, an AWS customer, and two other startup founders who work with AWS, about their experiences of building successful businesses as a part of an underrepresented demographic, how strong partnerships and accelerator programs changed the game for them, and why more initiatives like the one from AWS are vital. 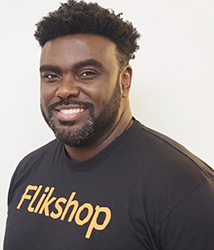 In 2012, Marcus Bullock launched Flikshop, a platform that sends photos delivered as postcards to any person in any prison instantly, with an often difficult topic on his resume—a felony conviction. At the age of 15, Bullock entered a maximum-security prison to begin an eight-year sentence for carjacking a man in a parking lot. During this time, he said he cycled through “anger, frustration, and complete disillusionment.” What kept him afloat was regular correspondence from his mother.

“She wanted me to understand that there was still life to be lived,” said Bullock. “And so, she made a commitment to send me photos and write me letters every day until I came home.”

That constant reminder of life on the other side continued to drive Bullock when he got out. He founded a painting business and used the profits to fund the development of Flikshop, an app built on AWS that lets anyone take a picture, write a message, and send it as a physical postcard to an incarcerated friend or loved one.

Yet Bullock had no technical skills when he left prison. Inmates weren’t allowed to use computers, and when he began his sentence, the internet was still on the perimeter of mainstream culture. His only experience of it was through movies. “You think you understand what it does. But it didn’t really exist when I went it, and when I came home, there it was,” he said. “To go from nothing to suddenly being able to type anything into a search bar, and to have all this information pop up, was just the most mind-blowing experience ever. The whole world had changed.”

His reaction? To dive right in. The more Bullock learned about developing applications for smartphones
and the web, the more he learned what he needed to learn. Questions that tech insiders consider common parlance were alien to him at that point. “What does UX/UI mean? What are wireframes? How do we think about pricing? What is a server? What’s the difference between hosting servers and cloud computing? I had a massive knowledge gap in trying to figure out how to launch,” he said.

It’s a gap that Bullock has been incredibly successful in bridging. Flikshop has now shipped over 700,000 postcards to inmates in jails, prisons, juvenile facilities, and ICE detention centers around the country, and continues to grow at 20% month over month. The company has also developed enterprise partnerships with Fortune 100 companies such as Boeing, Bank of America, and AWS.

Looking back, when Bullock considers what advice he would have given himself when starting the business, one thing stands out—strengthen your network.

“I didn’t realize that having a felony would matter after I had proven I could generate revenue,” he said. “Or that not having access to social capital would differentiate me.”

That’s where accelerator programs and competitions changed the game. In 2018, Flikshop entered two incubator programs and finally developed the traction it needed to grow. Having singer John Legend’s campaign FreeAmerica partner with Bank of America and New Profit to invest in the business also helped.

“You can’t outwork relationships,” said Bullock. “No matter how incredible your product is, no matter how amazing the technology or the tool you’re able to introduce, no matter how incredible your marketing or strategy across platforms—relationships are what matter. It’s the people who become your advocates, supporters, and sponsors. It’s the people who kick down a door for you and say to someone, ‘Hey, you need to figure out a way to collaborate with Marcus.'”

When Adriana Vazquez started her smart garment company Lilu in 2017, she quickly found that the resources readily available to her Ivy League classmates were far harder for her—a woman and a Latina immigrant—to access. Recent Crunchbase data, for example, shows funding for early stage startups led by Latinx founders has almost completely stalled in the past few years. “Such a small percentage of venture capital funding goes to Black and Latina founders,” said Vazquez. “The odds are really stacked against us.”

But Vazquez persisted. Leaning on technical degrees from both MIT and the University of Pennsylvania, she developed the first Lilu smart bra for breastfeeding mothers. Vazquez had seen so many of her women colleagues deal with the stress, even shame, of pumping—a critical task for any mother who needs to keep up her milk supply—while at work or on the go. Not only that, but most pumps were cumbersome and uncomfortable to use.

“Technology should make people’s lives better, easier, and bring joy into them,” she said. “I was surprised by how technology wasn’t supporting moms as well as I knew it could.”

But Vazquez still needed to prototype and get her product into customers’ hands, all of which required a

great deal of testing and iteration, not to mention time and capital. In the beginning, Lilu was aided by grants and prizes in pitch competitions, but it was the boost it received from larger accelerators, and
funding from America’s Seed Fund, a National Science Foundation program, which Vazquez said really put her company in gear.

“A good accelerator with a good program, really early on, can make such a big difference,” she said. “So many founders don’t have necessary resources, connections, or access to capital. But these are the things that make the impossible possible. We have people innovating from all cultures and parts of the world, and they typically don’t have access.”

Vazquez noted too how AWS, even before the launch of the Impact Accelerator, kept the door open—helping her hone her pitch and connecting her to resources that could move Lilu closer to its goals.

“AWS has always given me a platform to talk about what I’m doing,” she said. 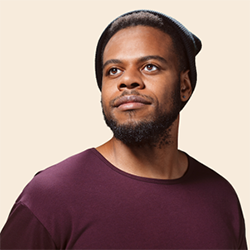 Claudius Mbemba, who grew up in Cameroon and immigrated to the U.S., saw from a young age how technology could improve lives in his country of birth. He showed an early talent for shaping technology as he saw fit, writing computer programming scripts and even hacking a gaming system his father bought.

“I was fascinated with technology and how it could enable me to access and create the things that I wanted to see in the world,” said Mbemba. That drive eventually led him to major in computer science at Ohio State University, before working as a software engineer. He later cofounded Neu, a business that helped connect vacation rental owners with housecleaners, the way Uber connects drivers and passengers.

“I’ve always had a knack for spotting things that could be better and solving that problem,” he said.

Today, Mbemba is engaged in a huge pivot, transforming Neu into a new business called Spritz—a software as a service (SaaS) platform that provides housecleaning professionals with the tools they need to grow and manage their operations, such as back-office functions, operations, logistics, and administrative tasks.

To do this, the company needed advisors and a broader field of investors who share Mbemba’s experience and deeply understand the business “It’s about having representation and investors and mentors understanding the technology and business model.”

Mbemba points out that immigrants and entrepreneurs share an important quality—making big, bold leaps. He has an adage when it comes to taking the plunge, as he’s done many times in his life.

“The sooner you start, the sooner you finish,” he said. “Often, prospective entrepreneurs and business leaders will delay because they don’t know how exactly to make a change. On the startup journey, you will encounter ‘unknown unknowns.’ Those unknowns are best solved by just doing the thing.”

The AWS Impact Accelerator gives high-potential, pre-seed startups the tools and knowledge to reach key milestones such as raising funds or being accepted to a seed-stage accelerator program, while creating powerful solutions in the cloud. Participants accepted onto the eight-week program will create a wide-ranging, personalized training curriculum from dozens of available sessions delivered by AWS startup experts and guest speakers, and will also learn how to use Amazon processes such as “two-way door decision making” and “working backwards” to drive day-to-day decisions and build nimble, innovative teams.