How to Enable Caching for AWS CodeBuild

AWS CodeBuild is a fully managed build service. There are no servers to provision and scale, or software to install, configure, and operate. You just specify the location of your source code, choose your build settings, and CodeBuild runs build scripts for compiling, testing, and packaging your code.

In this post, I will show you how to enable caching for AWS CodeBuild.

2. If a welcome page is displayed, choose Get started.

If a welcome page is not displayed, on the navigation pane, choose Build projects, and then choose Create project.

3. On the Configure your project page, for Project name, type a name for this build project. Build project names must be unique across each AWS account.

4. In Source: What to build, for Source provider, choose GitHub.

5. In Environment: How to build, for Environment image, select Use an image managed by AWS CodeBuild. 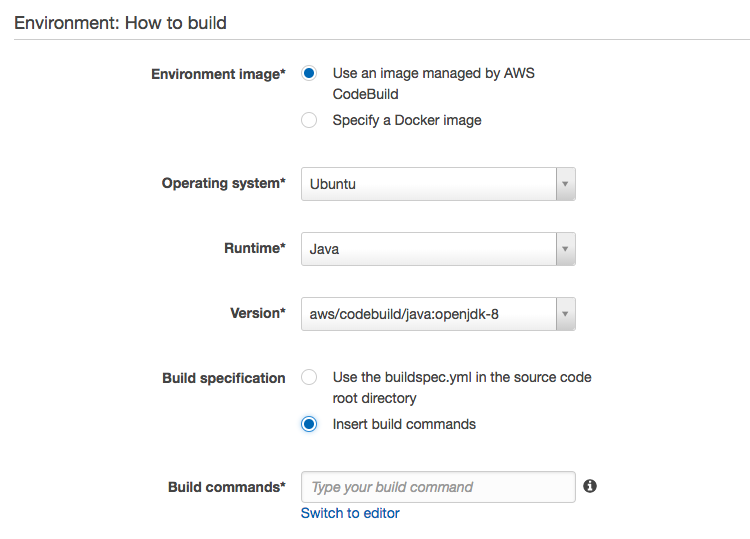 6. Under Build commands, click Switch to editor to enter the build specification.

Note: The cache section in the build specification instructs AWS CodeBuild about the paths to be cached. Like the artifacts section, the cache paths are relative to $CODEBUILD_SRC_DIR and specify the directories to be cached. In this example, Maven stores the downloaded dependencies to the /root/.m2/ folder, but other tools use different folders. For example, pip uses the /root/.cache/pip folder, and Gradle uses the /root/.gradle/caches folder. You might need to configure the cache paths based on your language platform.

7. In Artifacts: Where to put the artifacts from this build project:

9. In Service role, the Create a service role in your account option will display a default role name.  You can accept the default name or type your own.

If you already have an AWS CodeBuild service role, choose Choose an existing service role from your account.

11. On the Review page, to run a build, choose Save and build.

Let us review our first build for the project.

In the first run, where no cache exists, overall build time would look something like below (notice the time for DOWNLOAD_SOURCE, BUILD and POST_BUILD):

If you check the build logs, you will see log entries for dependency downloads. The dependencies are downloaded directly from configured external repositories. At the end of the log, you will see an entry for the cache uploaded to your S3 bucket.

Let’s review the S3 bucket for the cached archive. You’ll see the cache from our first successful build is uploaded to the configured S3 path.

Let’s try another build with the same CodeBuild project. This time the build should pick up the dependencies from the cache.

In the second run, there was a cache hit (cache was generated from the first run):

In this blog post, I showed you how to enable and configure cache setting for AWS CodeBuild. As you see, this can save considerable build time. It also improves resiliency by avoiding external network connections to an artifact repository.

I hope you found this post useful. Feel free to leave your feedback or suggestions in the comments.