We are excited to introduce a new version of AWS Schema Conversion Tool (AWS SCT) that includes support for PostgreSQL 10 partitioning, a new server-level Assessment Report, support for table-valued functions, and more.

Following is a quick overview of the topics we cover in this blog post:

The new features listed are just a subset of the capabilities in build 616. For a full list, see this release notes section.

Changes to the SCT Assessment Report

Let’s look at the steps needed to create an Assessment Report on the server-level objects:

Oracle to RDS for Oracle

Let’s look at an Oracle to RDS for Oracle conversion. SCT now analyzes server-level objects such as directory objects, tablespaces, user roles and privileges, and virtual private database policies. It also looks at the hardware configuration and other features like licenses, RAC and RAC One Node, Data Guard and Active Data Guard, database vault, spatial and locator features, schedules, and auditing. It provides input on whether these features are supported in the target version or not.

For example, Oracle stores data logically in tablespaces and physically in data files associated with the corresponding tablespace. In Oracle, you can create a tablespace with data file names.

Following is a sample Assessment Report for an Oracle to RDS for Oracle migration. 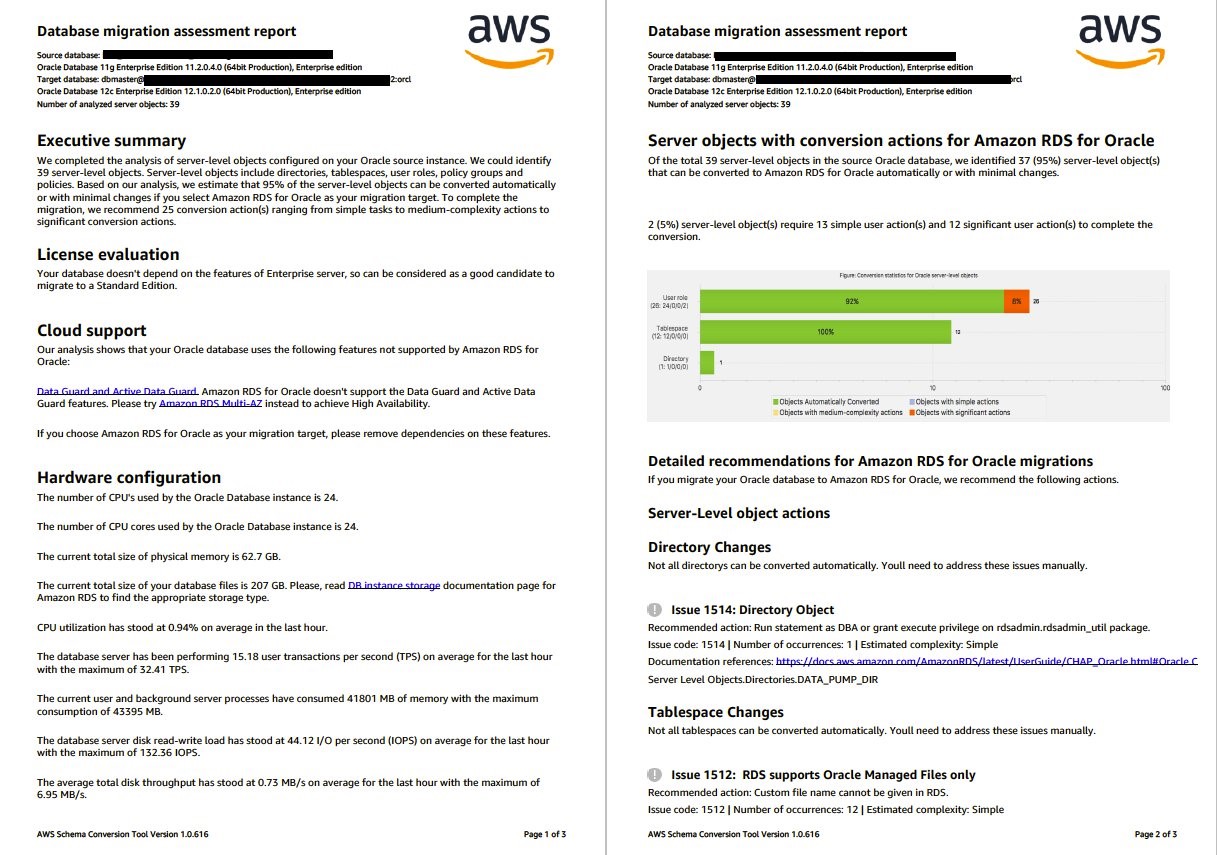 For example, you can create up to 30 databases on each of your DB instances running SQL Server on Amazon RDS. If the source DB instance contains more databases, then SCT displays information about this restriction in the Assessment Report.

Here is a sample Assessment Report for a SQL Server to RDS for SQL Server conversion. 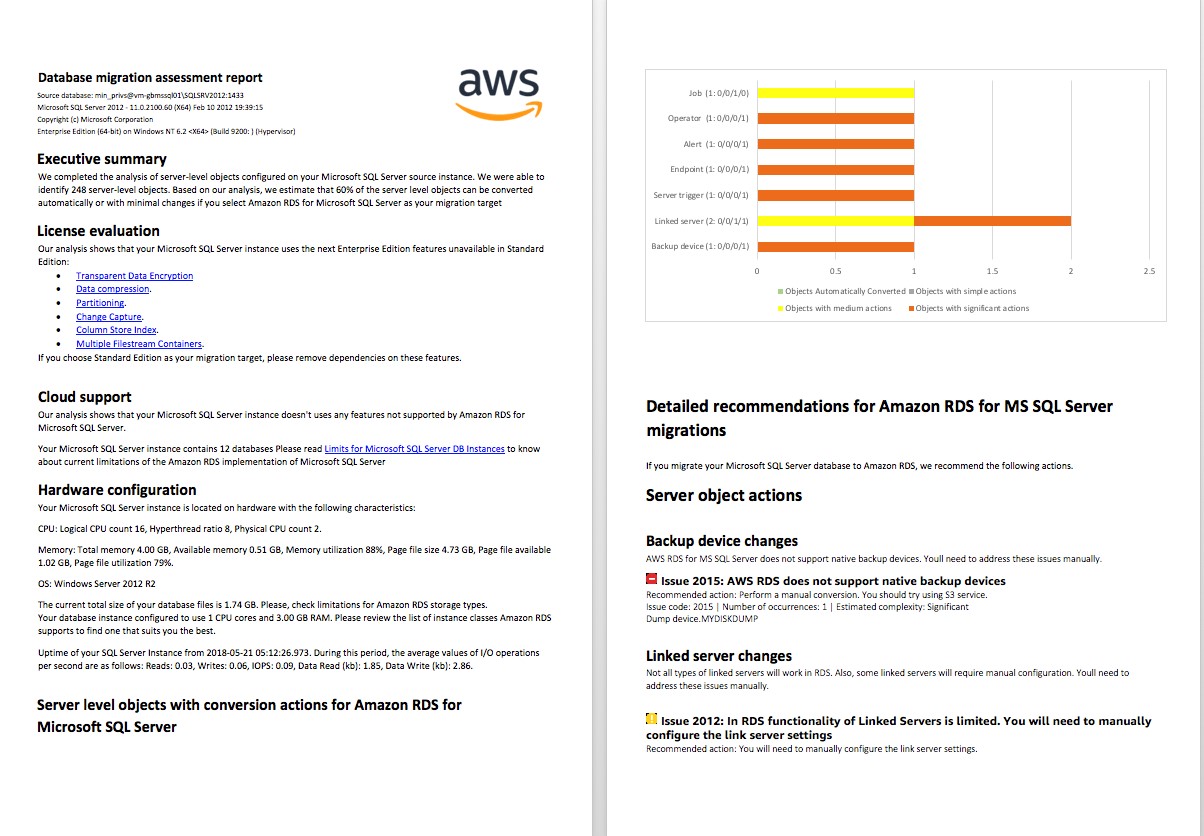 SCT emulates the behavior of inline table-valued functions by creating temporary tables. Following are a couple of examples to help clarify the conversion. 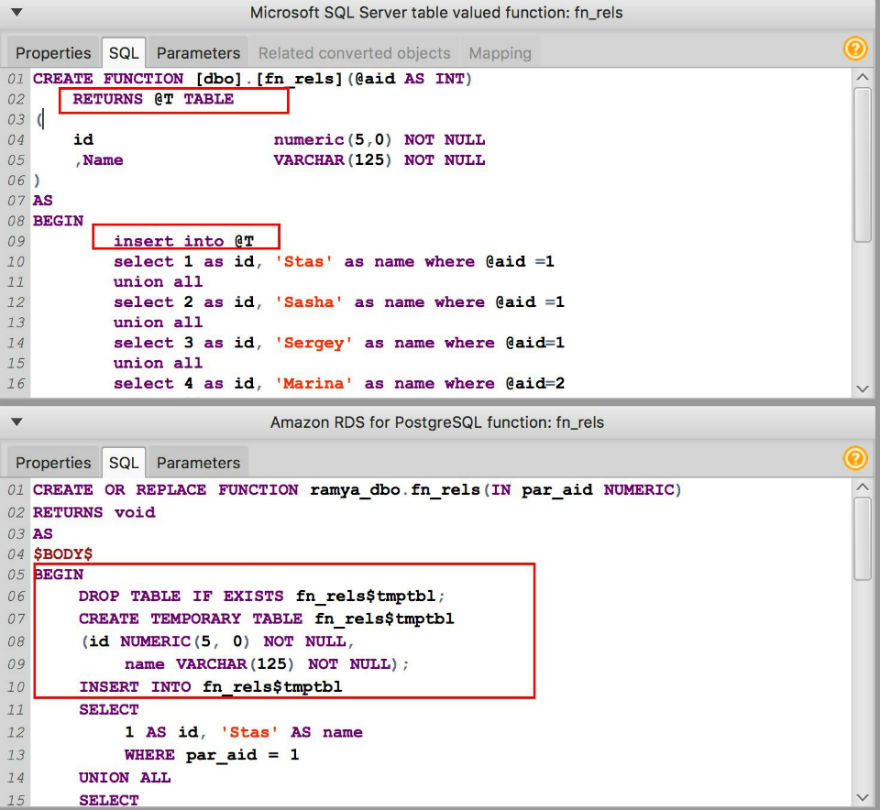 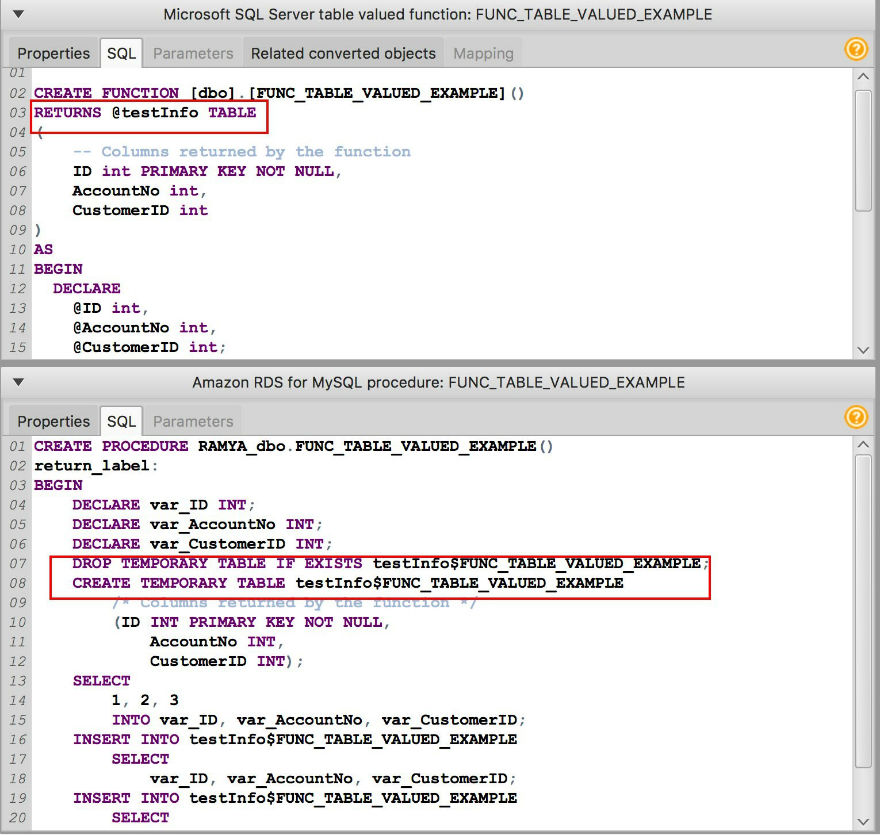 Support for partitioning in PostgreSQL 10

A partitioned table uses a data organization scheme in which table data is divided across multiple storage objects, called data partitions or ranges. These are divided according to the values in one or more table-partitioning key columns of the table.

Starting in version 615, SCT supports the partitioning feature of PostgreSQL for both Oracle and SQL Server as source databases. We have also added support for Db2 LUW starting with version 616.

Following are some of the differences between Db2 and PostgreSQL:

Following is an example of how SCT converts a partitioned table in Db2 to PostgreSQL. 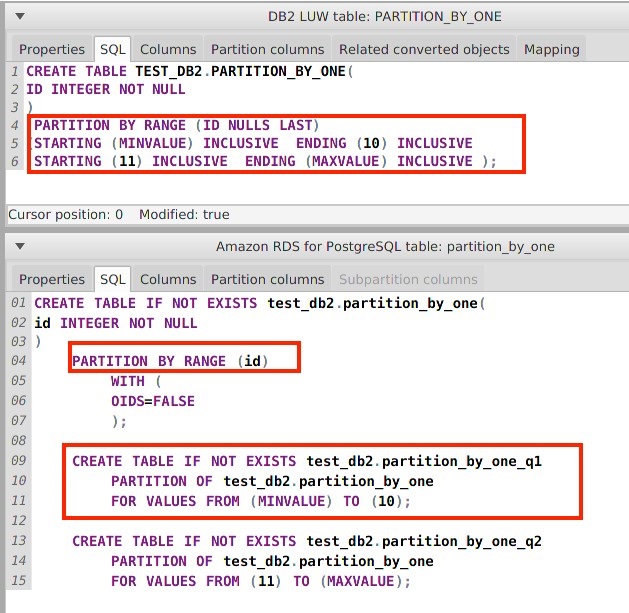 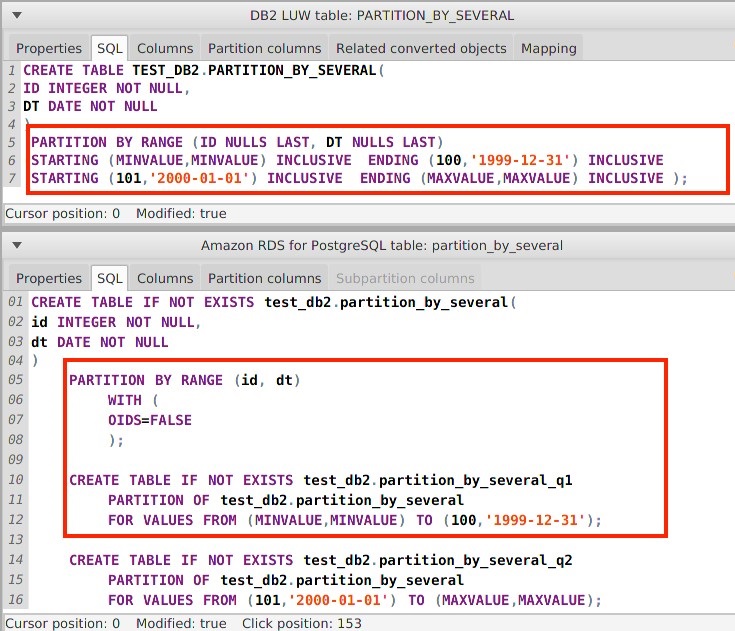 Following are some differences in partitioning schemes between Oracle and PostgreSQL:

Following are a couple of examples that demonstrate the automatic conversion of partitioned tables in Oracle to PostgreSQL. 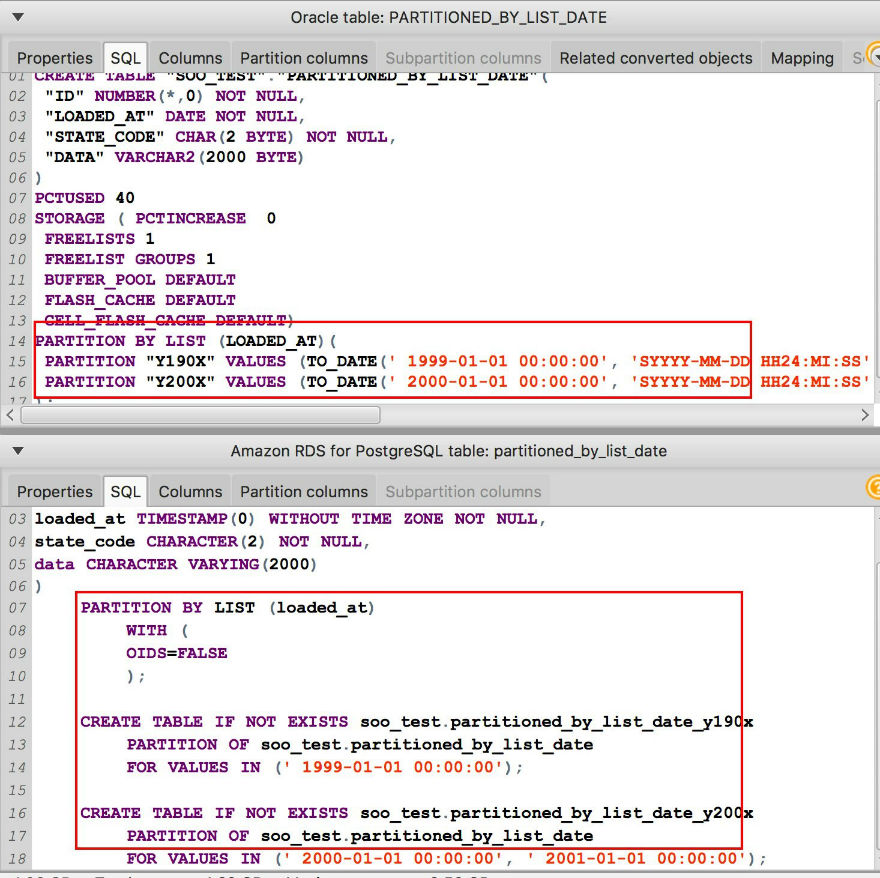 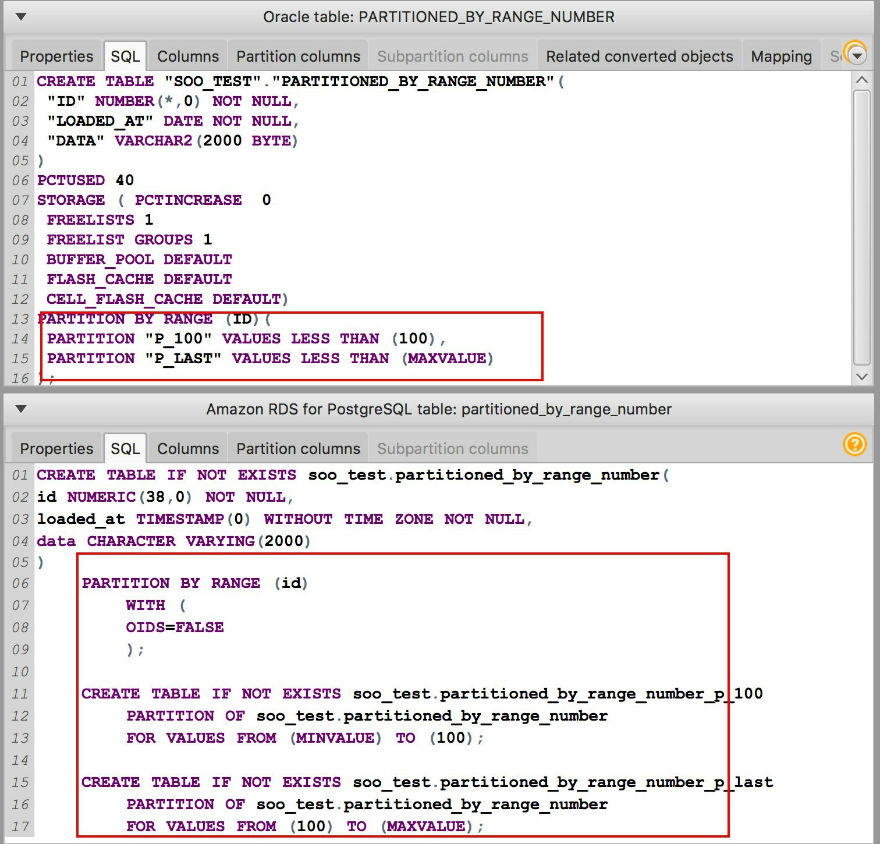 For SQL Server, partitioning is built with partition functions. For each function, the number of partitions created is equal to n + 1. The values don’t have to be listed in order. If the values aren’t in order, the database engine sorts them.

Following are some differences in partitioning schemes between SQL Server and PostgreSQL:

In addition to the features we discuss earlier in this post, build 616 delivers other UI improvements. You can access the entire feature list on the release notes page.

We believe that the new server-level Assessment Report should make planning your schema conversion and migration to RDS much easier. Support for partitioning also helps reduce the amount of manual work needed to migrate partitioned tables to PostgreSQL.

As always, feel free to drop us questions or feedback in the comments section. Happy migrating!