This is a guest post by Minted. In their own words, “Minted is an online marketplace for independent artists. Connecting a global creative community directly to consumers, Minted uses technology that enables products to be shared by independent artists who typically lack access to traditional retail outlets. Products available on Minted include works of art, holiday cards, home decor, and stationery created by independent artists and designers spread across all 50 states and across 96 countries. Minted’s community members share a deep love of creative expression, personal development, risk taking, and most importantly, paying it forward by helping each other.”

Minted runs several apps, including main ecommerce platforms, community-related sites to interact with independent artists and designers, wedding websites, and digital invitation platforms. Holiday card sales are one of our key businesses. Because of that, our ecommerce platform gets 10 times more traffic during November and December, especially during traffic peaks on Black Friday and Cyber Monday.

Originally, most of our apps shared a single, centralized MySQL database (DB) cluster backend. We struggled to keep the on-premises database stable and avoid site-wide outages during peak traffic.  After we chose Aurora for our databases, it solved most of our database-related scaling problems. We could also move away from our centralized DB cluster to multiple, app-specific DB cluster architectures for better scaling.

This post discusses Minted’s scalability challenges and how we addressed them by migrating our infrastructure to AWS cloud, and in particular how we migrated our database clusters to the Amazon Aurora platform and scaled our online marketplace for Cyber Monday, 2019.

The following diagram illustrates our infrastructure architecture before migrating to AWS. 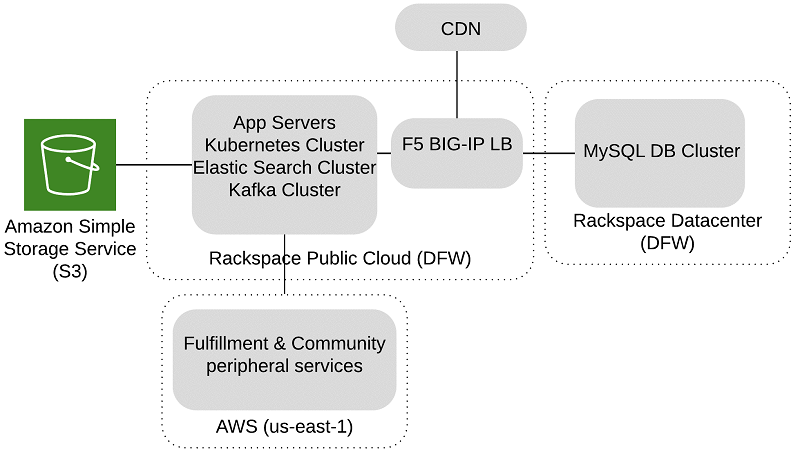 Our original infrastructure was hosted in a hybrid platform that spanned multiple data centers. For example, in the Rackspace public cloud, we had application servers, Kubernetes clusters, Kafka, Elasticsearch, and solr. We also had MySQL DB clusters in a Rackspace DFW data center, image assets in Amazon Simple Storage Service (Amazon S3), and fulfillment and community peripheral services in AWS.

The hybrid infrastructure presented major challenges for us, primarily:

Migrating all our apps to the AWS Cloud solved most of our capacity- and scalability-related problems. Aurora, in particular, helped address our database scalability problems. We also migrated to cloud services like Amazon Elastic Kubernetes Service (Amazon EKS) and Amazon Managed Streaming for Kafka (Amazon MSK) for our Kubernetes and Kafka infrastructure.

We built our entire infrastructure using Terraform, which greatly simplified our deployment automation framework. Our hosting cost decreased as well. Now we can quickly scale up application servers and Aurora DB clusters for peak days and scale them down as soon as they’re no longer needed. This wasn’t possible at Rackspace, where we usually provisioned 30% more for both application servers and databases, and kept them running for weeks. 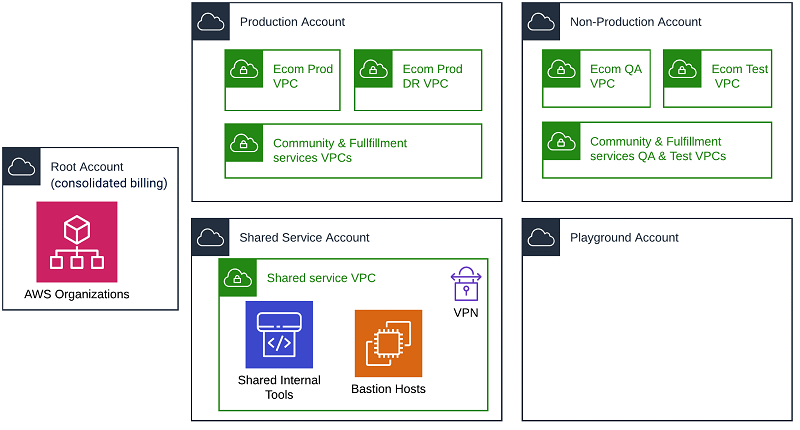 We went with multiple AWS accounts to keep production, non-production and shared internal tools environment isolated for better security as shown in the above diagram. 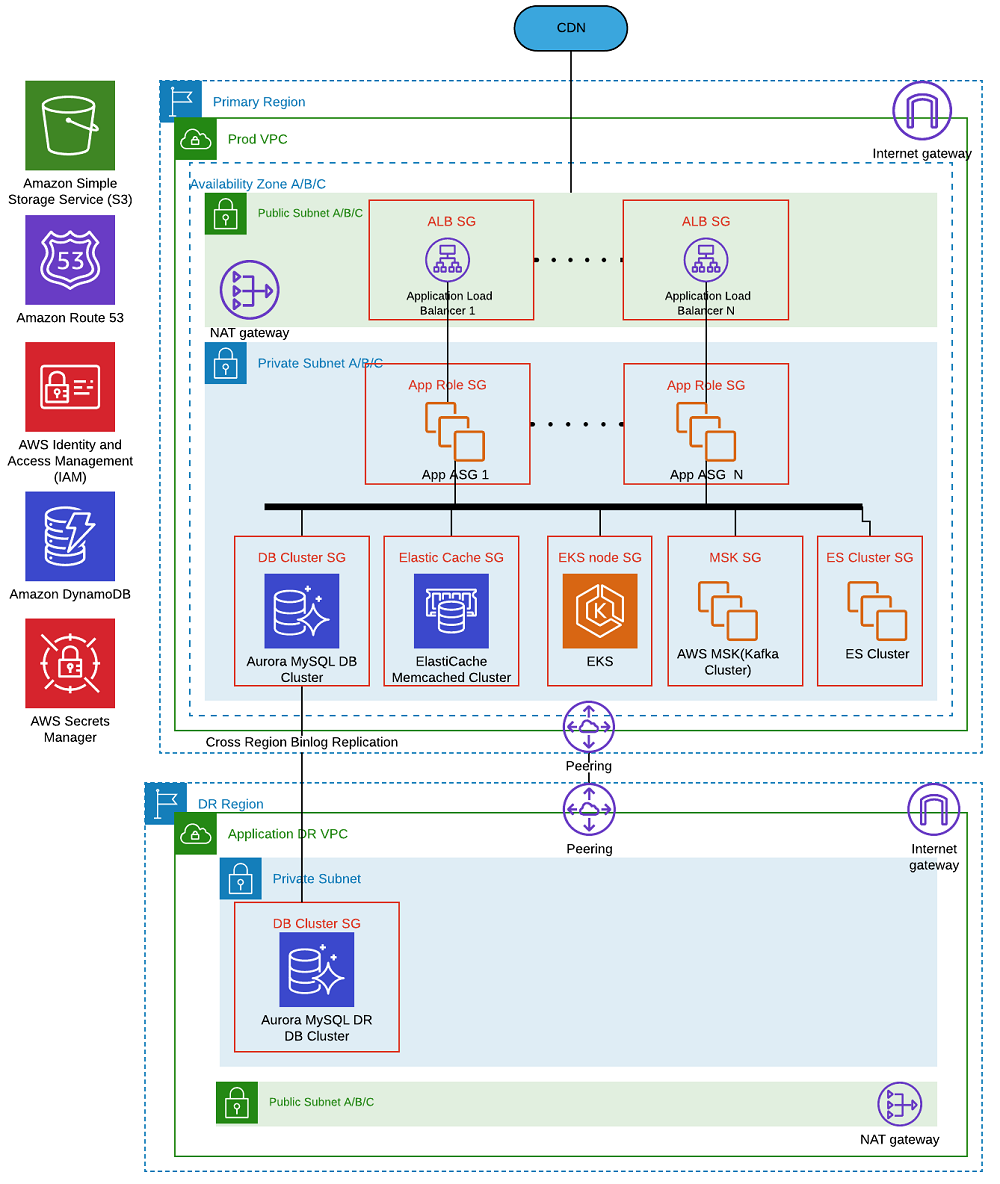 Our ecommerce platform includes shopping funnel, community sites, pricing endpoints, back-office sites. We hosted the entire infrastructure inside an Amazon Virtual Private Cloud (Amazon VPC) in us-east-1 and DR site at another VPC in us-west-2 as shown in the above diagram. We used multi-AZ deployments for infrastructure components like ALB, ASG, Aurora DB, MSK, Elastic cache and Elastic Kubernetes Service cluster for high availability. For security and isolation, we went with separate security groups for every role and also routed all traffic going out of e-com prod VPC to peripheral service VPCs via AWS peering connections.

Migrating our on-premises MySQL cluster to an Aurora DB cluster

The database was the critical part of the migration. We decided to go with Aurora MySQL for the following reasons:

Because the DB primary instance is our usual choke point during Cyber Monday peak traffic, we did a load test with a newly built site focusing specifically on Aurora primary DB. We used JMeter to generate load, simulating Minted’s shopping funnel. The load test had the following parameters: 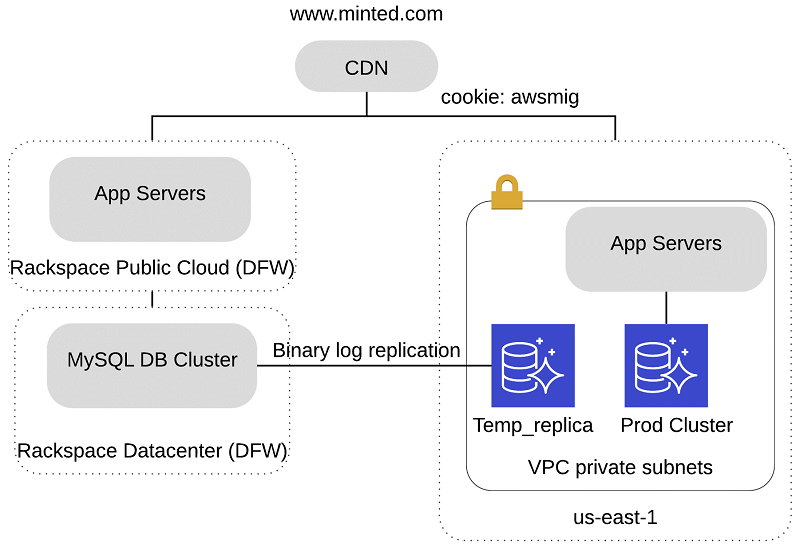 We built a duplicate site on AWS with an exact copy of the apps that we run behind our www.minted.com DNS name as shown in above diagram. The duplicate site was only accessible with the HTTP cookie awsmig:awsmig. This way, we could use the cookie to verify the new site end to end before actual cutover.

The database was the most complex part of the entire migration – we had to keep the downtime as low as possible. We also had to establish reverse replication to keep the option to roll the site traffic back to Rackspace in emergencies. The following steps review our database migration to Aurora.

Phase 1: Establishing database replication from the Rackspace primary to an Aurora replica

Establishing database replication from our primary to a replica included the following steps:

The database cutover was a 20-minute site-wide planned downtime. It included the following steps:

Despite several failed attempts and unexpected outages during this migration process, the database portion went according to plan.

We encountered a data corruption issue for timestamp and datetime columns during our initial replication sync between the on-premises MySQL primary and the new Aurora replica. This occurred because of a time zone configuration mismatch coupled with a known MySQL bug. See the following code:

We wrote the following data validation script using mysqldump to validate the latest subset of rows (at least 1 million) between MySQL primary and Aurora replica Temp_slave to be safe, Most of our tables have auto increment unsigned integer primary key column except a few tables, the below script compares the tables with primary key and we manually compared the ones without primary keys.

Originally we hosted most of our critical production microservices, such as the pricing endpoint, customizer API, and flink cluster, in a self-hosted Kubernetes cluster. We built those using the Kubespray open-source tool. It was complicated to maintain and scale the self-hosted cluster with a small team, so we chose to migrate to Amazon EKS.

We ran more than 3,000 pods with varying levels of memory and CPU resource quotas assigned during Cyber Monday 2019, when we usually get short and frequent surges in traffic. Amazon EKS doesn’t have monitoring data on its control plane to show the resource usage metrics of primary, etcd nodes. To be safe, we pre-provisioned our worker nodes for our anticipated traffic growth with a buffer instead of automatic scaling. We also told AWS Support in advance to adjust our control plane node resources accordingly. We plan to test automatic scaling on Amazon EKS for our Cyber Monday 2020 traffic.

We took away the following learnings from our Kubernetes migration:

In terms of site stability, Cyber Week 2019 was by far the smoothest event we’ve ever had. We had our highest ever sales day on Cyber Monday, and the ecommerce site performed with no outages or latency issues. We also got great feedback from our artist and designer community about their site experience.

As of this writing, we have already moved most of our MySQL database fleet to Aurora. It’s currently our default platform for hosting MySQL databases for all our new apps.

Balachandran Ramadass is a Staff Engineer at Minted in the Site Reliability Engineering team. Bala has more than 7 years of experience in DevOps and building infrastructure at the AWS cloud. He has a keen interest in Databases, building microservices in Kubernetes, API performance optimization, and planning & scaling large-scale e-commerce infrastructure for the yearly holiday peak traffic. He holds a Masters degree in Electrical and Computer engineering from Louisiana State University, in his spare time, he loves playing cricket, hiking with his son and cooking.