Amazon Relational Database Service (Amazon RDS) for MySQL 5.5 major version is reaching end of life, and it’s recommended to upgrade to newer supported major versions. Amazon Relational Database Service (Amazon RDS) provides newer versions of databases so you can keep your DB instances up to date. These versions include bug fixes, security enhancements, and other optimizations. When Amazon RDS for MySQL supports a new version, you can choose how and when to upgrade your DB instances. Amazon RDS for MySQL supports major version and minor version upgrades. A major engine version upgrade can introduce changes that aren’t backward-compatible with existing applications, whereas minor version upgrades include only changes that are backward-compatible with existing applications.

In this post, we look at the following topics:

To encourage the use of newer versions of MySQL, Amazon RDS for MySQL will stop supporting the creation of new MySQL 5.5 instances starting January 13, 2021, via both the AWS Management Console and AWS Command Line Interface (AWS CLI).

The following table shows the major version upgrade paths that Amazon RDS for MySQL supports (as of this writing).

To find out if you have any MySQL 5.5 instances in a given Region, on the Amazon RDS console, choose Recommendations. On the Active tab, your instances are listed under Deprecated major versions. 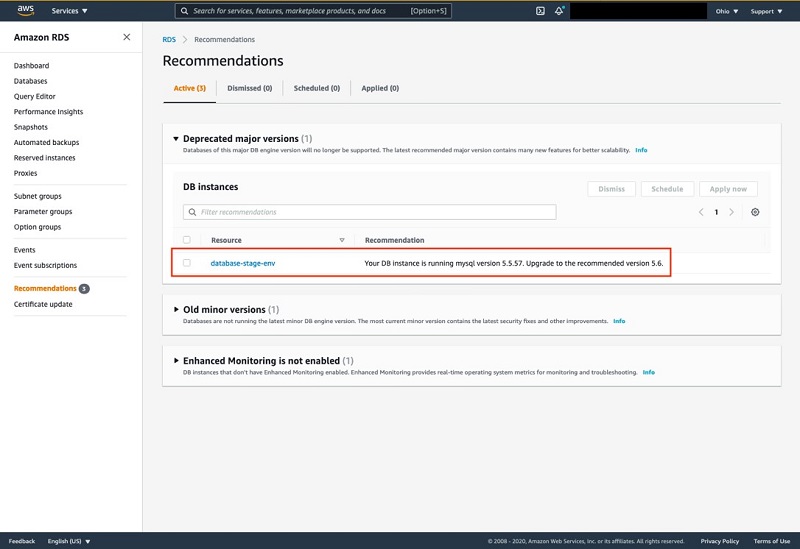 You can also get a list of all valid upgrade target versions for a database version using the describe-db-engine-versions AWS CLI command in a given Region:

As part of deciding which version to upgrade to, you have the following options:

If you have any MySQL 5.5 instances in your account, you can upgrade them before February 9, 2021. For instructions on upgrading a database instance, see Upgrading the MySQL DB engine.

We recommend you upgrade any of your RDS for MySQL 5.5 DB instances to 5.7 or newer versions because they are the long-term support releases.

When upgrading any database engine’s major versions, checking for compatibility of the new version and its features plays a crucial role in the upgrade’s overall success. MySQL database versions and releases can differ in how they work and interact with applications, which may result in compatibility issues. Therefore, it’s crucial to upgrade your RDS for MySQL DB instances to a version that is compatible, certified, and supported by your application.

In certain cases, feature improvements and performance optimizations in newer releases also play a pivotal role in picking a target engine version for your upgrade. 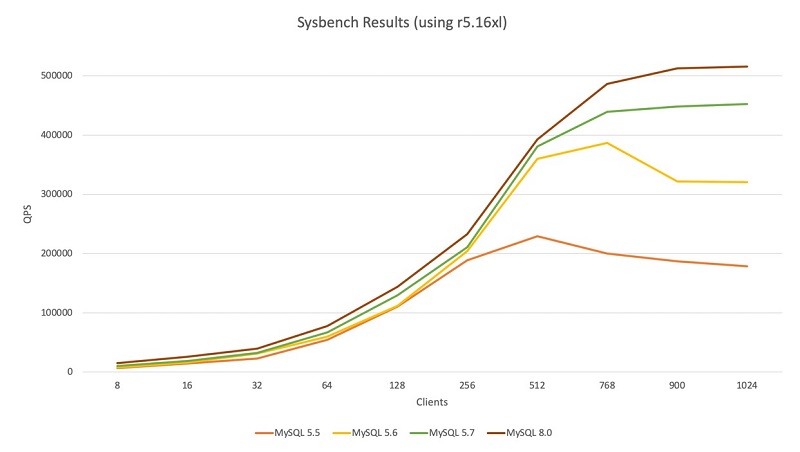 Amazon RDS for MySQL lets you manually initiate a major version upgrade by modifying the DB instance—either via the console, AWS CLI, or Amazon RDS API. This is an in-place upgrade and requires downtime for your applications during the upgrade process. The duration of the upgrade process depends on the engine version and the DB instance class. The biggest determinant of upgrade duration when upgrading to MySQL 5.7 major version is if there is a need to convert date and time format columns to the new format, which can take hours for large tables. You can determine the amount of time it takes to upgrade by performing trial upgrade exercises with a snapshot restore in a staging environment. Upgrading your production database instance is an irretrievable process and if any issue occurs during or after the upgrade process, the only fallback option is to restore from the latest snapshot. So as a best practice, always take a snapshot before initiating the upgrade.

If you’re running your DB instance in a Multi-AZ deployment, Amazon RDS for MySQL upgrades both the primary and Multi-AZ synchronous standby simultaneously.

How Amazon RDS for MySQL performs a major version upgrade

When a major version upgrade is invoked on the console or via the AWS CLI or Amazon RDS API, Amazon RDS automation completes the following steps:

When performing an upgrade, consider the following:

For more information about the upgrade, see Upgrading the MySQL DB Engine.

Gaurav Sharma is a Senior Solutions Architect at AWS. He works with customers providing technical assistance and architectural guidance on various AWS services. Prior to AWS, Gaurav worked for over 23 years in database management, database engineering, and cloud architecture roles for various large-scale enterprises.