This is the second blog of the series introducing the AWS for Games Cohort Graph. You can read the introductory blog here.

In the first part of this blog series, we covered what the AWS for Games Cohort Modeler is, what challenges it solves, and provided both a high-level architecture and a code example to experiment with. In this blog post, we’ll dive deeper into the data model and demonstrate how customers can adapt the example schema to the specific needs of their studio.

Understanding the specifics of the data model is critical to the process of adapting and extending the AWS for Games Cohort Modeler for your specific use case. Whether you’re uncovering toxic community members, discovering the buying patterns in your player community, or analyzing how players consume your content, building the right data model to aggregate and highlight the right data is key.

Why a graph database?

There are also a number of simple data science techniques you can employ with a graph data model to identify new behavioral insights without having to use machine learning, which requires significantly more data to become effective.

A vertex represents a data object in the database. For example, a vertex can represent a player, an in-game activity like chatting, griefing, or healing other players, or even a marketing campaign that a player can interact with. You can attach properties to vertexes, so if a customer wants to quickly and easily refer to how many times a player has been banned, how much they’ve spent on in-app purchases (IAP) in total, or how much total time in game they’ve spent, you can load that data in as an attribute on the vertex and have it available with a simple query. 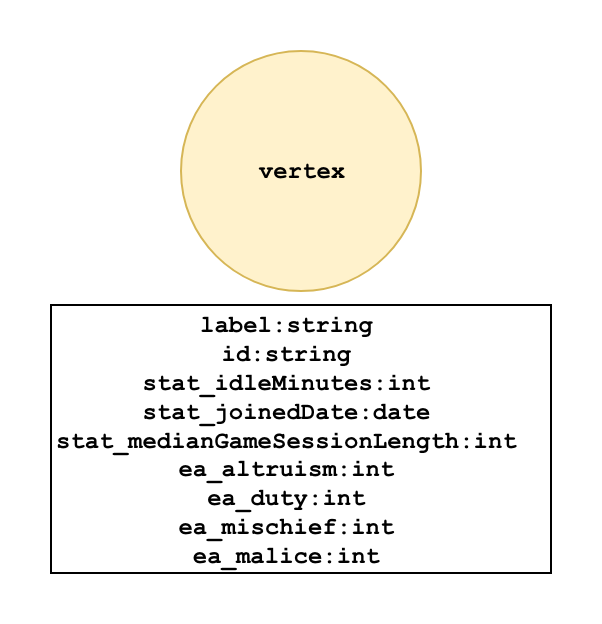 An edge is the data structure that defines a relationship between two vertexes. If you have two vertexes representing players with an edge between them, that edge describes how those two players have interacted. Just like vertexes, edges can also contain additional properties, so you can aggregate the details of each relationship on the edge between them – whether you’re counting the number of times player X has messaged player Y, grouped with player Z, or griefed player A.

The AWS for Games Cohort Modeler uses these graph primitive data type to build relationships with the following vertexes:

Between these vertexes, the Cohort Modeler defines specific relationships with the following edges:

This sample diagram is a visualization of the data model: 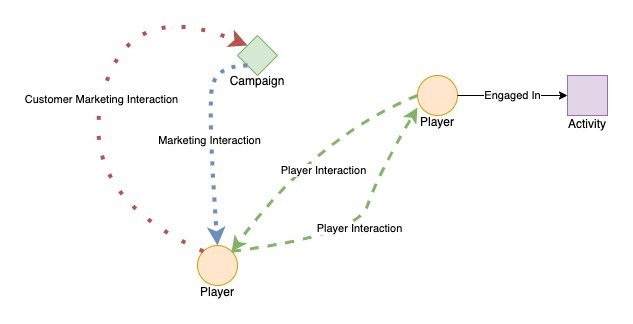 Player vertexes track a player’s identity and their aggregated behavioral traits (which, themselves in aggregate, define their cohort). Edges between players define the strength of their in-game relationships.

Player-initiated edges are the edges that can emanate from a player to another vertex. These are described as follows:

Properties that a player vertex and player-player edges could contain include:

The system can infer how to change a player’s personality profile based on their participation in an activity.

An example of the properties an activity vertex and player-activity edges could contain include:

Defining the effects of a player taking part in an activity in the data model has several advantages:

Campaign vertexes track the relationship between studio-sponsored events such as in game events, email marketing campaigns, or other studio-to-customer interactions.

Examples of properties for both the campaign vertex and edges to and from the vertex contain:

Data needs to be attached to the activities a player can engage in, both alone and with others, so that a cohort can be built and identified over time. The following example shows how to build a personality model and monitor activity of community members’ distinct profiles.

The code example defines four personality traits that each activity a player undertakes may correlate to, building their profile as they interact with other players in the game.

When you build your own profiles, ensure that there are concrete, definitive boundaries between them so that specific activities can be rated effectively.

It’s important to note that both player and activity vertexes are defined with these attributes – for instance, trying a disallowed name when creating a character might be rated as low-level mischief by your community team, so the system knows how to modify a player vertex when the event is reported. In this way, players can be more distinctively differentiated than by a simple plus/minus reputation rating, and predictive analysis can be more effective at identifying different kinds of cohorts.

Customers should follow these best practices to maximize performance:

In this blog, we defined graph database primitive data types, how they are applied within the AWS for Games Cohort Modeler, and finished up with some best practices how to create a model for your game.

When defining your own data model, a couple of questions to keep in mind:

Visit the GitHub repository and modify it to fit your specific use case.