If you are a content or service provider delivering video over fixed bandwidth infrastructure (such as satellite, cable, or terrestrial networks), you continuously look for ways to fit as many programs as possible in your statistical multiplexing (statmux) system without compromising the video experience delivered to customers. Statmux, which has been in use for over 20 years, distributes available bandwidth over a number of channels depending on their complexity. It allocates higher bandwidth to more complex channels and lower bandwidth to less complex ones, thereby achieving better video quality across all channels compared to simply dividing the fixed total bandwidth evenly among a number of channels.

A typical statmux system continually analyzes the video scene complexity (derived based on spatial and temporal activity statistics) of each channel and dynamically allocates the bitrate based on this analysis. This approach does not consider the perceptual nature of the content. Why allocate bits to a channel if the viewer is not able to perceive the benefits? To improve bitrate allocation, we take a page from the AWS Elemental Quality-Defined Variable Bitrate (QVBR) rate-control algorithm, based on the concept of context-aware encoding, and extend its use for the new AWS Elemental Statmux algorithm. Now, the bitrate allocation is driven by perceptual models that adapt to the encoded content with the objective of maintaining consistent quality among all channels in a Statmux group. This results in better overall video quality and bandwidth efficiency than the previous approach.

In the new Statmux algorithm, each encoder prepares and sends estimated bitrates for 10 QVBR quality levels while considering the minimum and maximum bitrates as capping values. These assignments are perceptually weighted using a module (similar to what is available in QVBR), referred to as content classification, where the content is analyzed for visual perception. The content classification module, which is quite accurate at predicting the visual perception across content, was developed using machine learning (ML) with an extensive training set. The Statmux bitrate controller loops through the quality levels versus predicted bitrate data set for all channels to find the quality level that gives the closest rate to the group bandwidth. An example of this can be seen in Figure 2 (a) where the Statmux bitrate controller decides, based on the available bandwidth for the six high definition (HD) Statmux groups, on a target quality level of 5.5 for all channels. This context-aware approach achieves better quality equalization among the channels by considering perceptible video quality when allocating bandwidth. 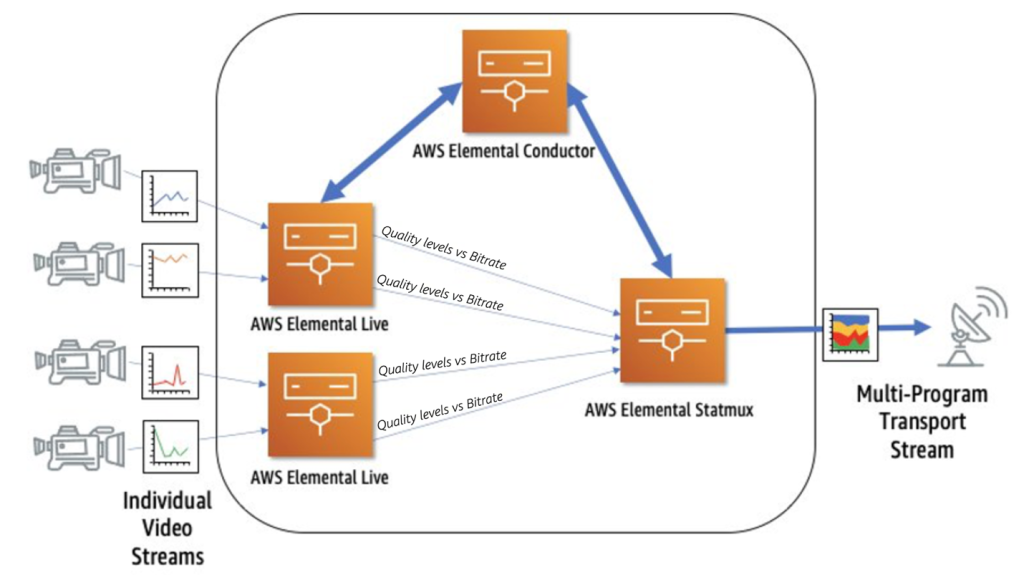 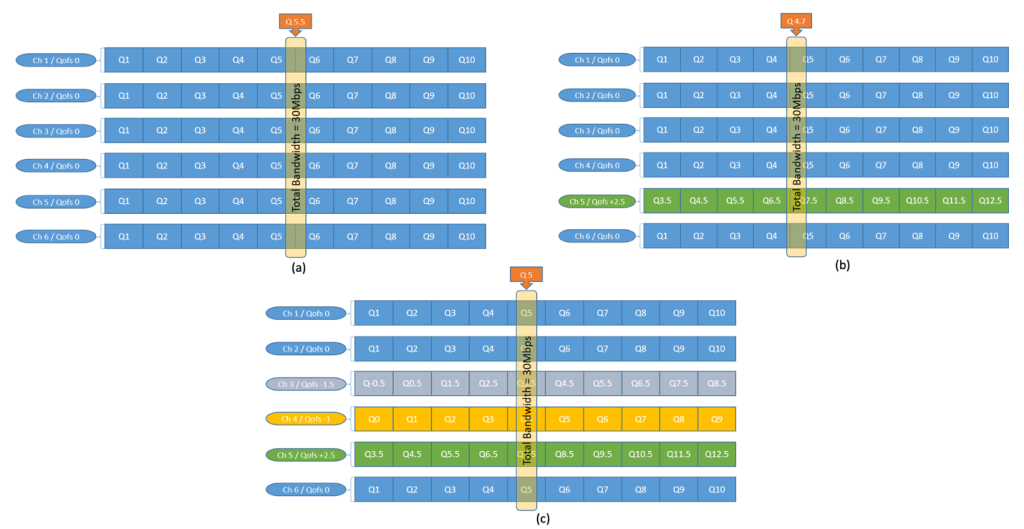 Consider a Statmux system composed of nine SD channels using the MPEG-2 codec in a total pool of 18 Mbps. The content for the channels varies from complex sports and concert scenes to simple talking heads sequences. As shown in Figure 3, the new Statmux algorithm reduced the bitrate distribution of channels 1 through 6 in favor of the more complex channels 7 and 8. What is the impact of this revised bandwidth distribution on the video quality of the new Statmux solution? As indicated in Figure 4, the average peak to signal noise ratio (PSNR) for channel 7 increased by 1.3 dB while the average PSNR for the other channels slightly increased. For PSNR values, the higher the value, the better the video quality. The major contribution to video quality is observed when we look at the minimum PSNR. Note the major increase in the minimum PSNR for the new Statmux algorithm, which translates into improvements in video quality.

Let us also consider another Statmux system with five AVC High Definition (1080i 30) channels with a total of 17.5 Mbps bandwidth (refer to Figures 5 and 6). The content for the channels in the Statmux group is composed of (1) various Olympic sports, (2) a drama series, (3) another drama series with more action, (4) a documentary program with outdoor scenes, and (5) a hockey game. Note the increase in allocated bitrate with the new Statmux algorithm for channels 2, 3, and 5, which led to improved average PSNR across these channels. In addition, channel 3 had an increase in the minimum PSNR of 3 dB due to the improved visual quality around dark scenes. Though the minimum PSNR was slightly reduced for channel 5, there was no visual impact. Regarding the challenging content in channels 1 and 4, even though these were allocated less bandwidth, their visual outputs look very similar to those generated using the previous Statmux algorithm.