When you’re starting your journey at AWS, you must define your AWS account strategy. There are many possible variations for how to organize the AWS accounts – by workload, team, specialization, business domain, functional domain, and many others. A common question from customers is: should I deploy multiple workloads into a single AWS account, or have one workload per AWS account? We would like to present a decision flow to help you answer this question and avoid having to migrate your workload to a different account later.

Multi-Account strategy is one of the most important pillars for a strong foundation at AWS. When adopting multiple accounts you can create compartments for cost, service limits, blast radius, and resources. You can find a list of benefits and additional information in the whitepaper Organizing Your AWS Environment Using Multiple Accounts. This describes all of the best practices regarding the multi-account approach and how it can be implemented using AWS Organizations. Furthermore, the concept of a foundation inside of AWS can be better explored in this AWS Prescriptive Guidance, where the term Landing Zone is explained as the associated architecture where customers can host workloads by following best practices for multi-accounts, network, security, and monitoring. Customers can create landing zones by establishing their multi-account strategy using Organizations and quickly get set up with a multi-account environment using best practices with AWS Control Tower. ­

Even after understanding the concepts associated with a multi-account strategy and the landing zone, many customers still have questions, such as:

Those operating models will influence in which kind of account you will host your workload, considering the level of segregation that you need for your resources from the operation perspective. But this isn’t the only decision criteria to be validated. There are other technical concepts that should be evaluated, such as the level of blast radius and how you handle your service limits. You can think of blast radius as the maximum impact that might be sustained in the event of a system failure, meaning that you have to measure the impact that a compromised account will expose, if it’s supporting multiple workloads. Another point is to understand AWS service limits. Those limits are related to account-per-region, and they are distributed by services in a way that each service has its own limit. Knowing it is extremely important to understand if workloads located in the same account can compete with the same AWS service quotas.

Now, let’s change the perspective from operations to application. AWS services and customer applications can assume roles at AWS. This is the way that an application can interact with an AWS service. For example, if you have an AWS Lambda function that must update an Amazon DynamoDB table, then you can allow the Lambda’s service role to perform this action into the DynamoDB table. Because of this, you must analyze the level of segregation that your application needs when sharing an account with multiple workloads. You must limit access to Lambda functions, Containers, and Amazon Elastic Compute Cloud (Amazon EC2) Instances to access only their associated resources. To provide this level of segregation, you need an Identity and Access Management team that will be in charge of IAM roles and policies management.

The IAM team can take advantage of Attribute Based Access Control (ABAC), resource-level permissions, and authorization based on tags to segregate and isolate resources. This provides that each application will access just its own resources. Each AWS Service has its own authorization conditions, so it’s important to review the features supported by each service by looking at AWS services that work with IAM. Application access segregation in micro-accounts is already in place, because the account by itself is the isolation.

Before moving to the decision flow, consider the following: as described in the Multi-Account Best practices, it’s recommend to separate your workloads by software development lifecycle, which means that Development, Staging, and Production should have their own accounts. We can go further and determine that one account can act as a “sidecar”, supporting resources or pipelines that enable you to build, validate, promote, and release changes to your workloads across all environment’s accounts. That is the reason why we start the decision flow assuming that the minimal structure related to accounts is already defined. Therefore, you already have Organizational Units (OUs) for each environment (Dev, Stag, and Prod). It’s important to remind you that other OUs could be required to support accounts related to infrastructure services, security, logs, and other shared services that support multiple workloads. I’ll omit those OUs because this post is focused on the decision flow to create or reuse existing accounts. But you can find detailed information in this AWS Prescriptive Guidance.

Let’s pretend that you are a Product Owner, have a team working with you to develop a new product, and don’t know if you need new accounts. Again, assuming that your organization already has OUs defined, let’s go through the decision flow, using the application as a starting point. The decisions related to the application, taken by the Product Owner, should be influenced by operating models, reduced blast radius, and competition on service limits.

i. Application team is responsible for the application code.

ii. Platform and Infrastructure Team is responsible for compute, storage, network, and troubleshooting tasks, defending the overall SLA. Here, you have the account owner.

iii. IAM Team is in charge of Access Management.

i. Application and Platform is managed by the same team, which builds and runs the workload. Here, you have the account owner.

ii. IAM Team is in charge of Access Management.

Now, let’s move to the following decision flow using the Application as the starting point, playing the role of the Product Owner: 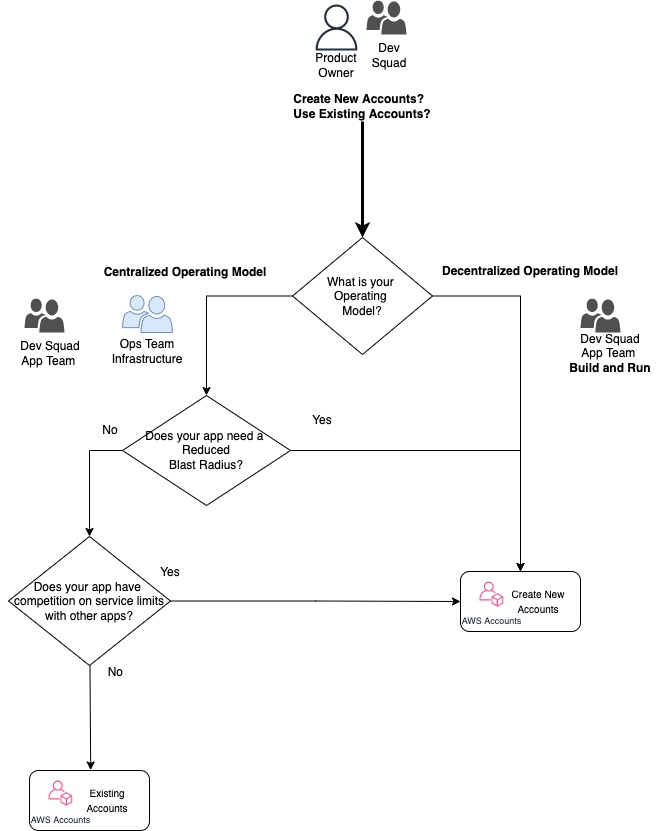 As a first exercise, let’s assume that you, as a Product Owner, don’t have a team with enough knowledge of how to operate at AWS, or your company embraces a centralized operating model for all of the workloads. Therefore, the answer for the first question in the flow is to go with a Centralized Operating model, where your development team will just build the application and consume pipelines and infrastructure provided by a centralized IT operations team. However, another point should be analyzed: What happens if the account is compromised due to other applications, and the impact reaches your application? If you don’t want to face this risk, or the impact is too high in terms of business, then you need a reduced blast radius, meaning that new accounts should be created for your workload and managed by the centralized team. If you don’t need a reduced blast radius and there’s no competition for limits in the same account, then you can take advantage of an existing account that is also owned by the centralized team. It’s also clear, but important to emphasize, that we should have an owner for each account that will be the point of contact, avoiding gray boundaries. The centralized team will work with you to decide where is the best place to host your workload, based on the requirements and the decision flows illustrated in the figure above. As mentioned before, ABAC Attribute Based Access Control (ABAC) can also be used to allow developers to launch resources in a shared account.

The second scenario is when your team can build and operate a specific product. In this scenario, there’s one team responsible for both application code and infrastructure. This team will own the operation, being responsible for code and infrastructure deployments and troubleshooting incidents. To give this ability, it will be necessary to delegate account access to the team, so that they are owners of all of the account’s resources. There are benefits using this model, since the application’s backlog will be self-contained in the team, and it will avoid having external dependencies with other teams. On the other hand, the team is responsible for responding to incidents and owning the application’s SLA. Following this, it will be necessary to create dedicated accounts, supporting just one product.

It’s important to mention that micro-accounts shouldn’t be tied to teams. Instead, bind it to Products. The reason is that sometimes teams change during the lifecycle of a product. To illustrate why micro-accounts shouldn’t be bound to teams, let’s suppose that Team A is building and running their own product A using micro-accounts, and after some time, they also become in charge of product B and deploy it to the same set of accounts as product A. Then, the product B grows quickly and suddenly it needs a dedicated team to manage it. Since Product A and Product B are in the same accounts, they share permissions and access the same resources. Based on this, it will be necessary to migrate the product B to Team B’s accounts. Instead, if Product B was created in their own set of accounts (even with Team A managing it initially), then the handover would be simpler: Grant access for Team B in the Products B’s accounts and revoke Team A’s accesses.

When compared with the previous scenario within a Centralized Operating Model, it’s just a matter of providing access to the code repositories and development environments to the new team. It wouldn’t require any handover tasks or even migration of Product B to another operation team or accounts, because everything is already centralized, and the permissions necessary to operate are all set.

Depending on the decision path that you selected in the decision flow, you’re directed to host your workload into an existent set of AWS accounts, or create a new set of accounts. As a result, we can say that Centralized and Decentralized operating models aren’t completely tied to large or micro accounts. They can use both options, depending on each workload’s requirements. This means that you can have one centralized operations team that can manage workloads in large and micro accounts simultaneously. You can also have a decentralized operation team or business unit supporting their workload in micro-accounts.

You can use Operating Model, Blast Radius, Service Limits, and Costs to decide which kind of account group that a new workload needs. On top of this, we can share some lessons learned from the field:

In this post, we demonstrated a decision flow that guides you regarding when to create new AWS accounts or use existent ones. Customers can use this decision flow as a mechanism to bring balance between accounts creation, workload placement into existing accounts, and how to distinguish between Centralized or Decentralized operating models.