Why you should change the way you think about hackathons 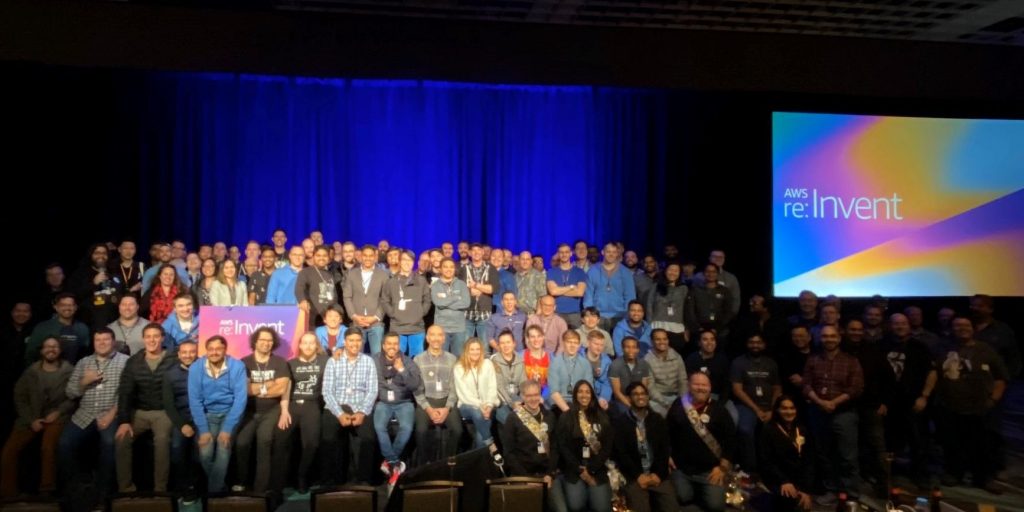 Participants, judges, and staff of the 2019 Re:Invent Hackathon for Good.

Maybe you’ve never thought about hackathons before. Or maybe you have a vague idea as to what they are. Or perhaps you are the champion of hundreds of hackathons. Either way, read on to learn why you should consider hackathons in a new way.

Show off your creativity, skills, and grit

A hackathon is not a four-hour guided lab, build-a-thon, or a bug bounty event. Hackathons are collaborative events where cross-functional teams compete under constraints (time-bound and with limited resources) to solve a business problem—often with code. Hackathons are prominent in the software developer culture, where builders can show their creativity, programming skills, and grit.

The term hacker is used loosely in movies and television, and often inaccurately portrayed. Instead of a hoodie and sunglasses wearing figure that talks about code and breaks the law, hackers at a hackathon are a group of people enthusiastic about solving problems with technology. Hackathons aren’t about hacking into something, but rather hacking a problem – per the original meaning of the word “hack.” A hack is “an application of ingenuity to produce a clever result, done quickly.”

Some examples of challenges presented at Amazon Web Services (AWS) hackathons include helping address the deforestation issue in Colombia, finding ways to use environmental data to improve the lives of those around them, and generating a prototype to serve people through sign language and translation.

We hack because it’s hard…and fun

Hackathons can be hard—both to run and to participate in. Why would people agree to take time out of their lives to try to hold or participate in one?

We hack not because it’s easy, but because it’s hard. A hackathon exchanges the usual constraints on building, meetings, planning, deadlines, and sprints for clear and simple constraints. Solve and present  the best solution to this problem in a prescribed number of hours. That exchange of constraints comes with freedom. It creates an atmosphere where it is okay to fail.

With the time and resource constraints of hackathons, you might think that big ideas are off the table. That has not been my experience. People are eager to tackle a problem, even taking big swings at solving hard or poorly defined challenges. The freedom to try without consequences puts the hackathon into a bubble outside the usual concerns. A lifting of expectations helps unlock creativity.

There’s a joy in building towards a solution, especially as a team. A hackathon has a positive energy sparked from the quiet but frenetic pace of teams trying to innovate. At the end of the day, I think there is something human about taking on a challenge and being able to look back and say, “It was hard, but I did it.” 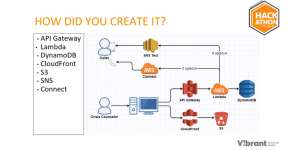 The winning solution architecture at the 2019 AWS Nonprofit Hackathon for Good.

For the last several years at re:Invent—our annual conference—I’ve been the master of ceremonies (MC) for the AWS Nonprofit Hackathon for Good. Our team worked with multiple nonprofits to present their real challenges to hundreds of hackers, while making sure those hackers had a good time.

As the team gathers to plan our next hackathon, we ask ourselves “why are we doing this?” I’m fortunate to have a list of nonprofits that have benefited from these hackathons—either directly due to the solutions hacked at these hackathons, or indirectly in the realization that technology can help them achieve their mission.

At Amazon, we work backwards from what our customers need and the same holds true with here. We have a process that helps our customers craft challenge statements from their real-world problems to make a difference. Bringing these real world problems into a safe space and event outside of the day to day with other creative minds has a way of reducing the tension and helping narrow the focus on solving just that problem.

As you think about hackathons, think about ways to free people from their usual constraints by considering an inclusive and supportive environment for trying, building, and learning by doing.

Comment below if you have questions about hackathons whether you want to understand the best ways to run them, win them, or the best things to “hack” or tweet at me @justintstanley and tell me what you’d like to learn about hackathons.