Today on Giving Tuesday, GameChanger Charity is hosting a live stream on Twitch to raise money and awareness about their mission. And this year’s fundraising includes the winning solution from last year’s re:Invent 2018 hackathon.

The re:Invent 2018 winning hackathon solution is a photo mosiac generator that builds a mosiac image from the photos of everyone who donates, and dynamically adjusts to a higher resolution with each additional donation. The tool is a plug-in to the Twitch extension and will be visible on multiple gamers’ Twitch fundraising streams – like CaptainSparklez, RoosterTeeth, Jack Pattillo, and members of the UCI esports team – on Giving Tuesday.

Nate Aschenbach, Chief Technology Officer of GameChanger, said the winning team went beyond the technical. “What clinched it for us was that they created something concrete we could use that was connected to our mission. The level of thinking from the volunteer developers that built the winning solution at the hackathon pushed us outside of the box with regard to what we’re providing to our viewership and streamers.”

The mission of GameChanger is to leverage gaming, technology, and innovation to improve patients’ quality of life. Through video games, character-based academic scholarships, and cutting-edge technologies like virtual reality (VR) and augmented reality (AR), GameChanger breaks down barriers for children facing long or short-term hospital stays, and particularly those who are isolated for treatment. It provides an outlet for creativity, intellectual engagement, and social connectedness, regardless of a child’s physical condition. Established in 2007, GameChanger has become a world leader in providing VR and AR experiences to hospital patients. These VR and AR experiences allow patients to escape the stark white walls that surround them in the hospital, while simultaneously providing a sense of community and excitement.

The 2018 winning hackathon team included a group of repeat winners: Anthony Johnson, Tamilvanan Ponnusamy, and Jonathan Baker from Ellie Mae (and host of The Cloud Pod computing podcast); and Matthew Kohn and Taylor Lewick from Foghorn Consulting. After the hackathon, students from the University of California, Irvine (UCI) esports program helped GameChanger develop and deploy the solution in time for Giving Tuesday this year on December 3, 2019. Students from UCI working on deploying the solution are Alice Lee, Shannon Chan, Roland Fernando, Chauncy Sapien, and Ian David. 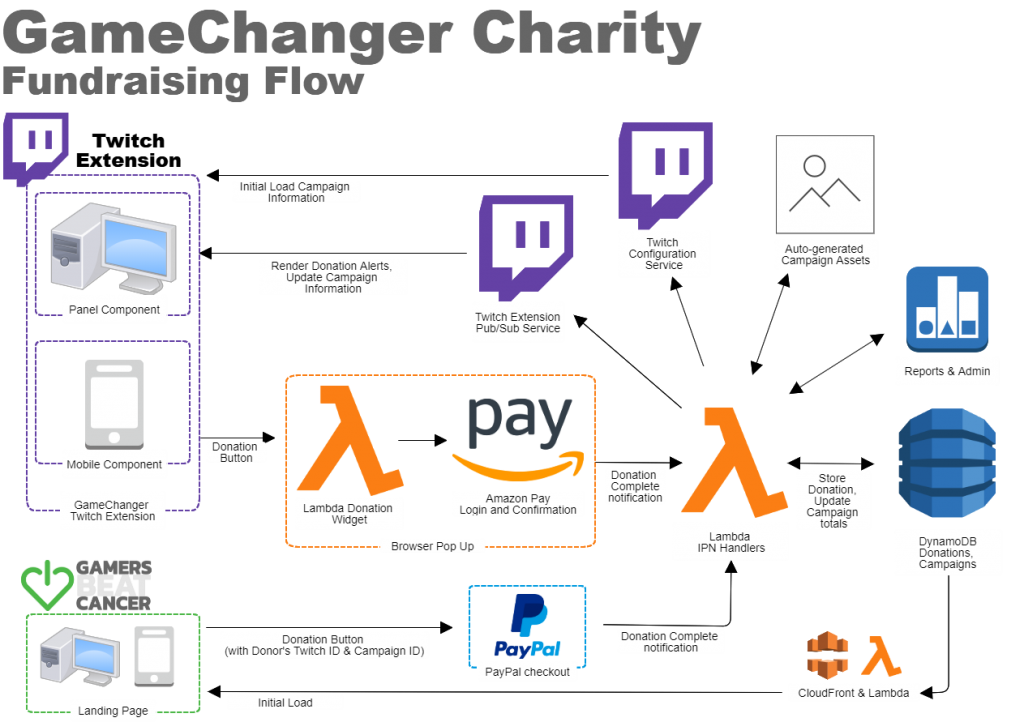 “Nobody does the hackathon for the prize. The real glory is creating something special – and tangible – for this nonprofit,” said team member Matthew Kohn. Team member Tamilvanan Ponnusamy continued, “It felt great to work 14-15 hours and deliver something that will be used and that will help kids battling cancer.”

This Giving Tuesday, check out gamersbeatcancer.tv or see the Twitch donation extension featured in real time by visiting the below live streams on Twitch:

GameChanger as well as the professional gamers that participated in the Giving Tuesday live streams will also be onsite at re:Invent 2019 on Wednesday, December 4, 2019 at the AWS Worldwide Public Sector Reception. Come by and participate in the GameChanger Charity Experience onsite, where gamers Vikki Kitty, MVD, TK Breezy, gamers from Rooster Teeth, UCI Esports Team, and Captain Sparklez will be battling attendees in games of Mario Kart, Minecraft, and Super Smash Brothers Ultimate.

AWS has also donated $250,000 to GameChanger Charity. Funds will be used for an upcoming project focused on improving the patient experience for children being treated for cancer.

Learn more about GameChanger Charity for AWS and AWS for nonprofits.