Containment is a crucial part of an overall Incident Response Strategy, as this practice allows time for responders to perform forensics, eradication and recovery during an Incident. There are many different approaches to containment. In this post, we will be focusing on isolation—the ability to keep multiple targets separated so that each target only sees and affects itself—as a containment strategy.

I’ll show you how to automate isolation of an Amazon Elastic Compute Cloud (Amazon EC2) instance by using an AWS Lambda function that’s triggered by tag changes on the instance, as reported by Amazon CloudWatch Events.

Preparing for an incident is important as outlined in the Security Pillar of the AWS Well-Architected Framework.

Out of the 7 Design Principles for Security in the Cloud, as per the Well-Architected Framework, this solution will cover the following:

After detecting an event in the Detection phase and analyzing in the Analysis phase, you can automate the process of logically isolating an instance from a Virtual Private Cloud (VPC) in Amazon Web Services (AWS).

In this blog post, I describe how to automate EC2 instance isolation by using the tagging feature that a responder can use to identify instances that need to be isolated. A Lambda function then uses AWS API calls to isolate the instances by performing the actions described in the following sections.

Your organization can use automated EC2 instance isolation for scenarios like these:

The example solution in this blog post uses a CloudWatch Events rule to trigger a Lambda function. The CloudWatch Events rule is triggered when a tag is applied to an EC2 instance. The Lambda code triggers further actions based on the contents of the event. Note that the CloudFormation template includes the appropriate permissions to run the function.

The event flow is shown in Figure 1 and works as follows:

When the Lambda function is invoked and the criteria are met, these actions are performed:

Note: If you had a security group with an open (0.0.0.0/0) outbound rule, and you apply this Isolation security group, your existing SSH connections to the instance are immediately dropped. On the other hand, if you have a narrower inbound rule that initially allows the SSH connection, the existing connection will not be broken by changing the group. This is known as Connection Tracking. 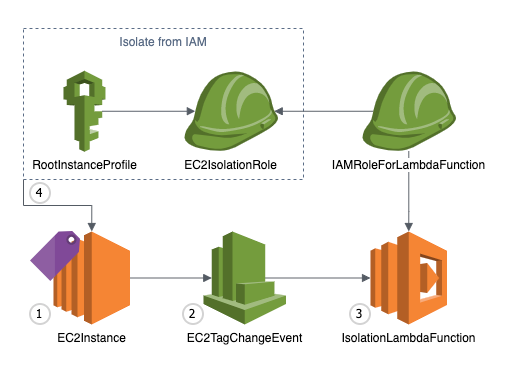 For the deployment method, we will be using an AWS CloudFormation Template. AWS CloudFormation gives you an easy way to model a collection of related AWS and third-party resources, provision them quickly and consistently, and manage them throughout their lifecycles, by treating infrastructure as code.

The AWS CloudFormation template that I provide here deploys the following resources:

Supporting functions within the Lambda function

Let’s dive deeper into each supporting function inside the Lambda code.

The following function identifies the virtual private cloud (VPC) ID for a given instance. This is needed to identify which security groups are present in the VPC.

The following function modifies the security group of an EC2 instance.

To deploy the solution provided in this blog post, first download the CloudFormation template, and then set up a CloudFormation stack that specifies the tags that are used to trigger the automated process.

Start by uploading the CloudFormation template to your AWS account.

To upload the template 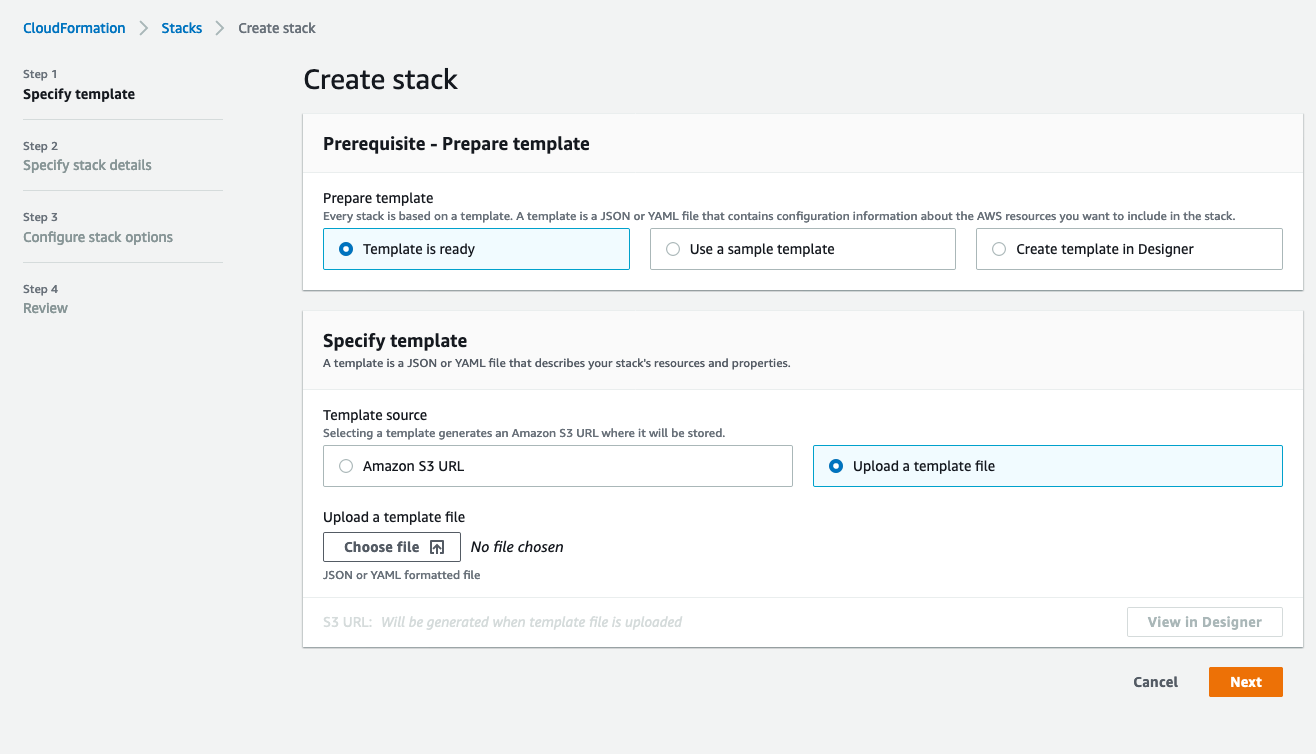 You can leave the default values for the stack as long as there aren’t any resources provisioned already with the same name, such as an IAM role. For example, if left with default values an IAM role named “SecurityIsolation-IAMRole” will be created. Otherwise, the naming convention is fully customizable from this screen and you can enter your choice of name for the CloudFormation stack, and modify the parameters as you see fit. Figure 3 shows the parameters that you can set.

The Evaluation Parameters section defines the tag key and value that will initiate the automated response. Keep in mind that these values are case-sensitive. 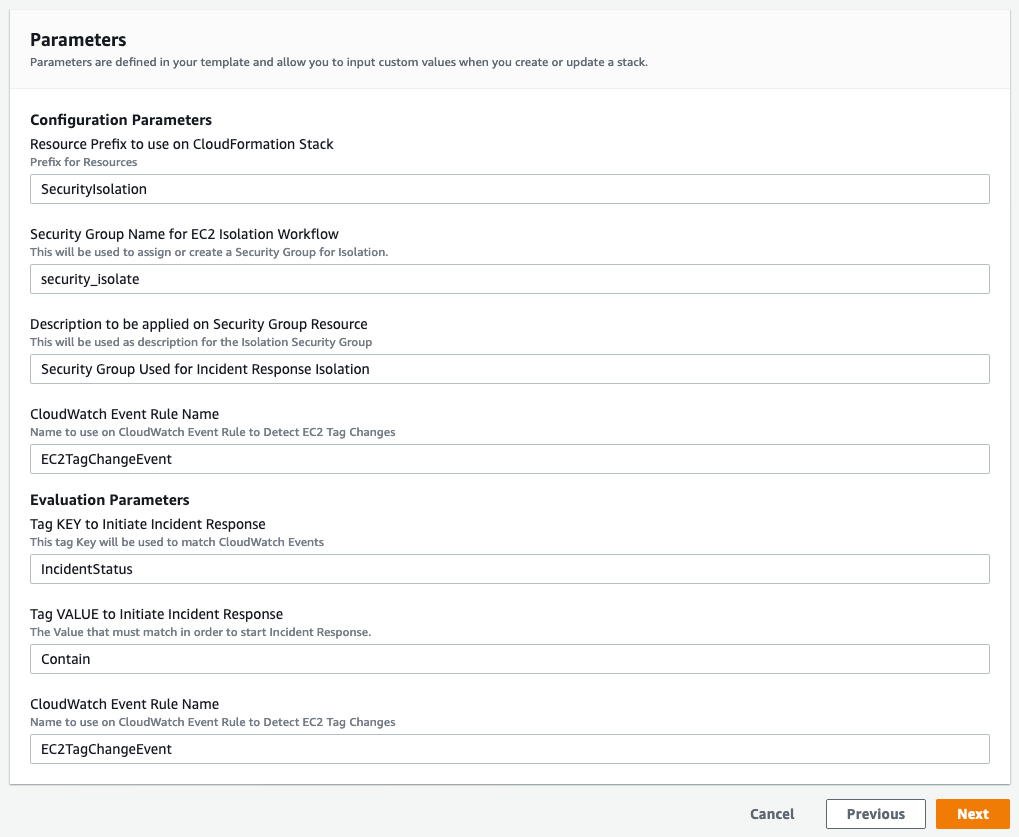 Choose Next until you reach the final screen, shown in Figure 4, where you acknowledge that an IAM role is created and you trust the source of this template. Select the check box next to the statement I acknowledge that AWS CloudFormation might create IAM resources with custom names, and then choose Create Stack.

After you complete these steps, the following resources will be provisioned, as shown in Figure 5:

To start your automation, tag an EC2 instance using the tag defined during the CloudFormation setup. If you’re using the Amazon EC2 console, you can apply tags to resources by using the Tags tab on the relevant resource screen, or you can use the Tags screen, the AWS CLI or an AWS SDK. A detailed walkthrough for each approach can be found in the Amazon EC2 Documentation page.

If you need to remove the restrictions applied by this workflow, complete the following steps.

Using the CloudFormation template provided in this blog post, a Security Operations Center analyst could have only tagging privileges and isolate an EC2 instance based on this tag. Or a security service such as Amazon GuardDuty could trigger a lambda to apply the tag as part of a workflow. This means the Security Operations Center analyst wouldn’t need administrative privileges over the EC2 service.

This solution creates an isolation security group for any new VPCs that don’t have one already. The security group would still follow the naming convention defined during the CloudFormation stack launch, but won’t be part of the provisioned resources. If you decide to delete the stack, manual cleanup would be required to remove these security groups.