August 15, 2021: This blog post is under construction. Please refer back to this post in a day or two for the most accurate and helpful information.

With EC2 Systems Manager, you can perform various tasks at scale through a simple API, CLI, or EC2 Run Command. The EC2 Run Command can execute a Unix shell script on Linux instances or a Windows PowerShell script on Windows instances. When you use EC2 Systems Manager to run a script on an EC2 instance, the output is piped to a text file in Amazon S3 for you automatically. Therefore, you can examine the output without visiting the system or inventing your own mechanism for capturing console output.

The easiest way I have found to do this is to create the role, and then each time you launch an instance, associate the role with the instance and provide the SSM agent installation script in the instance’s user data in the launch wizard or API. Here’s how:

Note: You must change the scripts slightly when copying them from the instructions to the EC2 user data: the word region in the curl command must be replaced with the AWS region code (for example, us-east-1).

Let’s assume that you will install the SSM agent when you first launch your instances. With that assumption in mind, you have two methods for installing the Amazon Inspector agent.

Just as we did above with the SSM agent, we can use the user data feature of EC2 to execute the Amazon Inspector agent installation script during instance launch. This is useful if you have decided not to install the SSM agent, but it is more work than necessary if you are in the habit of deploying the SSM agent at the launch of an instance.

Note: If you are adding these commands to existing user data, be sure that only the first line of user data is #!/bin/bash. You should not have multiple copies of this line. 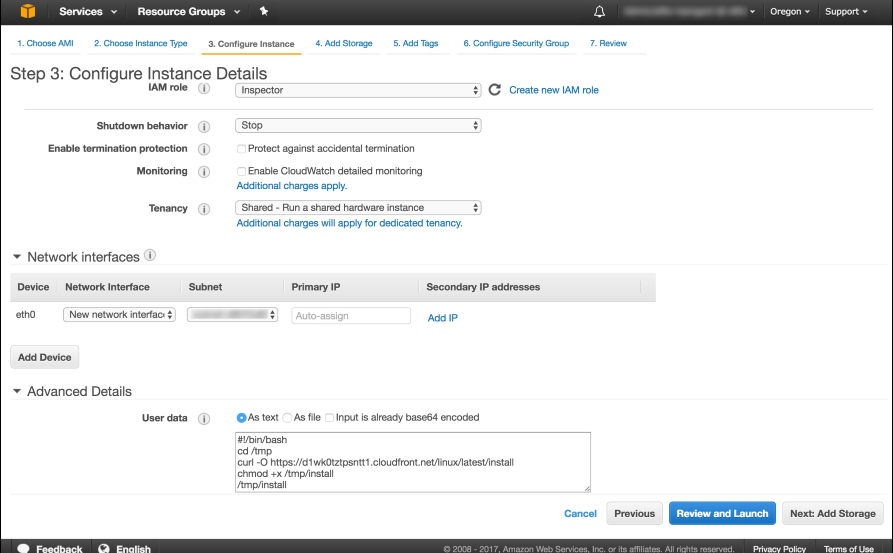 Finish launching the EC2 instance and the Amazon Inspector agent is installed as the instance is starting for the first time. To read more about this process, see Working with AWS Agents on Linux-based Operating Systems.

In environments that launch new instances continually, installing the Amazon Inspector agent automatically when an instance starts prevents some additional work. As we discussed in the previous method, you need to modify your instance launch process to include the EC2 SSM agent. This means you need to configure your instances with an EC2 Systems Manager role, as well as run the EC2 SSM agent.

Here are the details of the three-step process:

Step 1 – Create an IAM role for the Lambda function to use to send commands to EC2 Systems Manager:

Step 3 – Set up CloudWatch Events to trigger the function:

You have completed the setup! Now, whenever an EC2 instance enters the Running state (either on initial creation or on reboot), CloudWatch Events triggers an event that invokes the Lambda function that you created. The Lambda function then uses EC2 System Manager to install the Amazon Inspector agent on the instance.

In a subsequent AWS Security Blog post, I will show you how to take your security assessment automation a step further by automatically performing remediations for Amazon Inspector findings by using EC2 System Manager and Lambda.

If you have comments about this blog post, submit them in the “Comments” section below. If you have implementation questions, start a new thread on the Amazon Inspector forum.