By Sunil Kishen, VP Sales and Partnerships at Aviatrix
By Wayne Davis, Solutions Architect at AWS 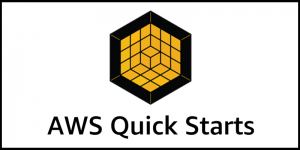 If you are sold on the concept of using a global transit network to connect Virtual Private Clouds (VPCs) to a hub-and-spoke architecture, you may be wondering where the best place to start is.

With the Aviatrix Global Transit Hub on AWS Quick Start, you can be up and running with fully-connected VPCs in about 10 minutes—without delving into the Command Line Interface (CLI), Border Gateway Protocol (BGP), or other tedious protocols.

What is a Next-Gen Transit Hub?

From an operations perspective, Aviatrix includes higher levels of automation via REST APIs, configuration wizards to simplify and streamline orchestration of networking services, troubleshooting with Aviatrix EC2 FlightPath and other integrated tests, and visibility with global dashboards.

Aviatrix, an AWS Partner Network (APN) Advanced Technology Partner, was founded on the belief that networking in the cloud should be as dynamic and scalable as cloud compute and storage. As one of the first APN Partners to earn the AWS Networking Competency, Aviatrix is well suited for implementing an AWS Global Transit Network.

Now, you can use the Aviatrix Global Transit Hub on AWS Quick Start to connect multiple geographically-dispersed VPCs and remote networks faster than ever.

Developed by Aviatrix in partnership with AWS, this Quick Start uses a hub-and-spoke model to quickly and easily establish communication between spoke VPCs and your on-premises network. The hub-and-spoke network topology works by routing traffic from multiple spoke VPCs through a central hub—an approach that minimizes the number of connections.

You can add spoke VPCs to the network by tagging them in AWS. Aviatrix Global Transit Hub automatically establishes VPN connections between the spoke VPCs and the hub VPC by using AWS CloudFormation templates and AWS Lambda functions. The transit network supports multiple AWS accounts and can be extended to include shared services with direct peering, or to connect your cloud network to on-premises networks.

Reasons to Choose Aviatrix for Your Global Transit Architecture

Various options are available for setting up a global transit hub in AWS. Aviatrix offers advantages that include:

Point-and-click, centralized management console (with REST API support) manages distributed Gateways that can easily be operated by both CloudOps and network engineers. No deep networking skills are required, and no network router CLI knowledge is needed. You can use the Aviatrix Controller to implement changes or customizations quickly and easily.

The Aviatrix Global Transit Hub is API-based and uses policy-based routing from the spokes to the transit hub VPC. The spoke VPC routes are advertised to the Transit Hub Gateways by the Aviatrix Controller. Those Gateways exchange routes with the on-premises network using the Border Gateway Protocol (BGP) via the AWS Virtual Private Gateway (VPG). Conversely, the learned on-premises routes from the Transit Hub Gateways are sent to the Aviatrix Controller for propagation to the spoke VPCs. Spoke VPCs do not run BGP.

Encrypted links, integrated stateful firewalls for policy enforcement, and control of outbound traffic using fully qualified domain name (FQDN) filtering ensures that security is fully integrated with your global transit network. VPC isolation and segmentation are created by design so that spoke-to-spoke connectivity through the transit hub is not allowed. Instead, Aviatrix supports spoke-to-spoke connectivity using AWS Peering or Aviatrix Encrypted Peering only where required.

The Aviatrix Controller dashboard provides a visual representation of your global transit network. It monitors, displays, and provides alerts on link status, performance, and link latency for transit hubs and spoke VPCs.

If you are deploying this AWS Quick Start for a new VPC using default parameters, here is the Aviatrix architecture the Quick Start builds on the AWS cloud: 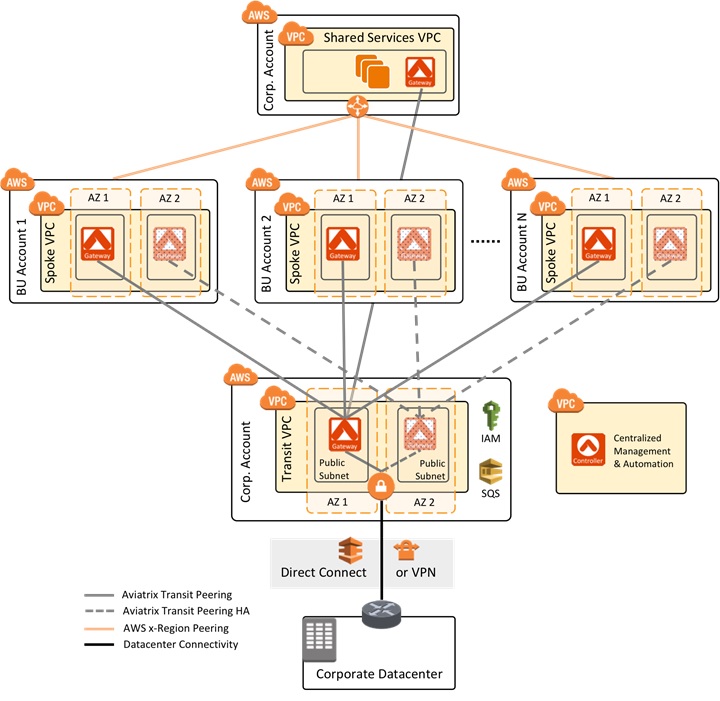 The Quick Start in Action

Here are the steps for deploying the Aviatrix Global Transit Hub on AWS Quick Start:

Establishing connections among VPCs doesn’t require expert-level networking skills. Rather, you can take advantage of the Aviatrix Global Transit Hub on AWS Quick Start to automate most of the configuration required, and connect multiple geographically dispersed VPCs and remote networks in about 10 minutes.

If you would like to see how Aviatrix can help transform your business, please contact Aviatrix Systems >>

This is My Architecture Video: Aviatrix

Watch our This Is My Architecture video with Aviatrix Founder and Chief Technology Officer Sherry Wei.