Serious about comedy since its formation in 2015, RushTix transformed its in-person show ticketing hub into a robust virtual comedy streaming platform used by the likes of Patton Oswalt, Sarah Silverman, Jeff Dunham, John Cleese, and more as the pandemic shuttered comedy venues worldwide. Initially a lifeline for comedians to continue bringing laughter to audiences during global lockdowns, the platform has proven more than a temporary pivot, providing a frictionless means for comedians to reach new audiences and broaden monetization opportunities. To deliver a positive, high-quality experience for both the audience and performer, RushTix uses Amazon Interactive Video Service (Amazon IVS) to power its live streams.

“We’ve stress tested nearly a dozen live streaming solutions, including spinning up our own, and Amazon IVS was the only one that provided the perfect balance of ultra-low latency and stability, which is very hard to achieve. It’s a spectacular system that’s elegantly built,” said RushTix CEO Jill Paiz-Bourque. 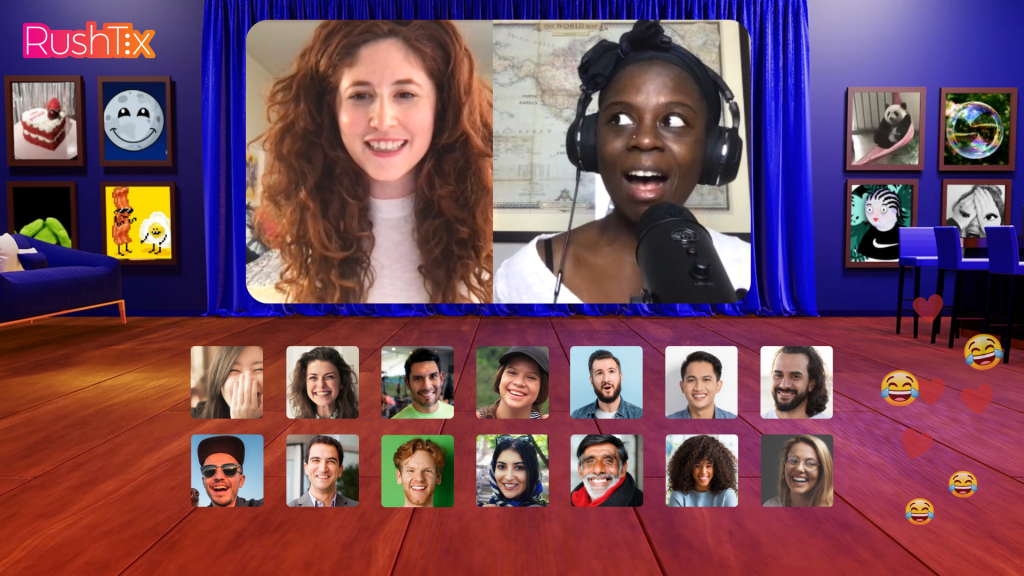 “The 2-5 second latency we get with Amazon IVS is crucial for the audience and entertainer to be able to engage in real-time,” Paiz-Bourque explained. “On-the-fly scaling is also important, especially when we have a surge of viewers, and the scaling with Amazon IVS is phenomenal; the servers automatically adjust.”

Along with live streaming performances, RushTix provides an interactive social experience for fans to engage with each other and the creator via chat and break-out rooms. Participants purchase tickets to virtually attend each show, and can also tip performers and buy merchandise through the platform. While a majority of audience members are based in the United States, viewers tune into shows from all over the world. Based on its success in the virtual event space, the company is preparing to launch a new product, RushTix Studio, which makes it easy for creators to produce dazzling virtual entertainment. With just a few clicks, creators can switch scenes, change elements on the screen, add interactive content, and roll-in audio and video. Creators can hear and see their fans with complete control of all audio and video and go live with just one click.

“We believe the future of virtual entertainment is about creating authentic and immersive experiences. RushTix Studio was built to empower creators to take virtual storytelling to a whole new level of artistry and imagination,” Paiz-Bourque concluded. “The pandemic may have forced entertainers into virtual performance venues, but it’s proving a trend with staying power. Our all-in-one solution eliminates a lot of creative pain points in executing virtual shows. A virtual show, when done well, can reach a much wider audience – without the physical limitations and time and financial constraints of a traditional tour.”

To learn more about building with interactive live video, check out: https://aws.amazon.com/ivs/