You can use AWS Managed Rules for AWS WAF to quickly create baseline protections for your web applications, including setting up lists of IP addresses to be blocked. In some cases, you might need to create an IP set in AWS WAF with the IP address ranges of Amazon Web Services (AWS) services that you use, so that traffic from these services is allowed. In this blog post, we provide a solution that automatically updates an AWS WAF IP set with the IP address ranges of the AWS services Amazon CloudFront, Amazon Route 53 health checks, and Amazon EC2 (and also the services that share the same IP address ranges, such as AWS Lambda, Amazon CloudWatch, and so on). These services are present in the AWS Managed Rules Anonymous IP list, and blocking them may cause inadvertent service impairment for applications that expect traffic from the services.

As an application owner, you can improve your security posture by using the Anonymous IP list in your AWS WAF web access control lists (web ACLs) to block source IP addresses from specific hosting providers and anonymization services, such as VPNs, proxies, and Tor nodes. Due to the generic nature of these rules, when you use the Anonymous IP list, you might want to exclude certain IPs from the list of IPs to be blocked, in order to allow web traffic from those sources. For example, you can allow traffic that originates from the AWS network.

Alternatively, you might want to permit only IP addresses from certain AWS services in a web ACL. This is a common requirement when you protect an Application Load Balancer by restricting all incoming traffic to CloudFront IP ranges. Creating your own custom list to allow expected traffic from the AWS network requires some effort, because you need to periodically update the list by using the IP ranges that we provide. With the solution we present here, you don’t have to manually manage the exclusion list. When the new AWS IP ranges are published, this solution will automatically fetch and update the list. 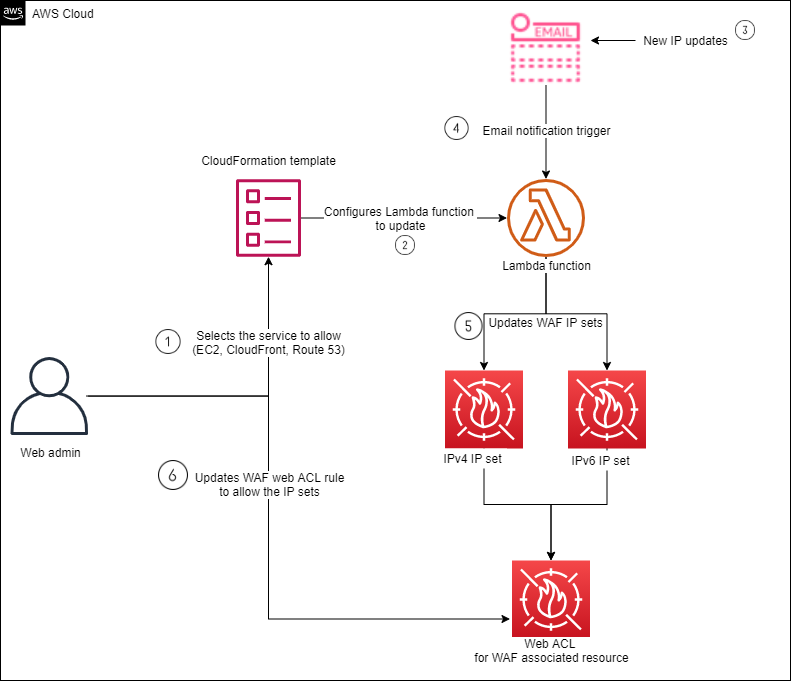 AWS sends Amazon Simple Notification Service (Amazon SNS) notifications to subscribers of the AmazonIPSpaceChanged SNS topic when updates are made to the public IP addresses for AWS services. This solution uses an AWS CloudFormation template to deploy an AWS Lambda function that is triggered by these SNS notifications. The function creates AWS WAF IP sets for IPv4 and IPv6 address ranges in your web ACL.

The solution workflow is as follows:

The solution is automatically created when you deploy the AWS CloudFormation template that is available on the solution’s GitHub page. There are three resources that you must have in place before you deploy the template:

The CloudFormation template deploys the required resources for this solution in your account. The following resources are deployed:

Solution deployment through the console

You can download the AWS CloudFormation template, called template.yml, from the solution’s GitHub page.

Note: The Region that you use when you deploy the template is where resources will be created.

On the Specify stack details page, you can enter the stack name, which will be the name used as a reference for resources created by the template, as well as six other stack parameters, shown in Figure 2. 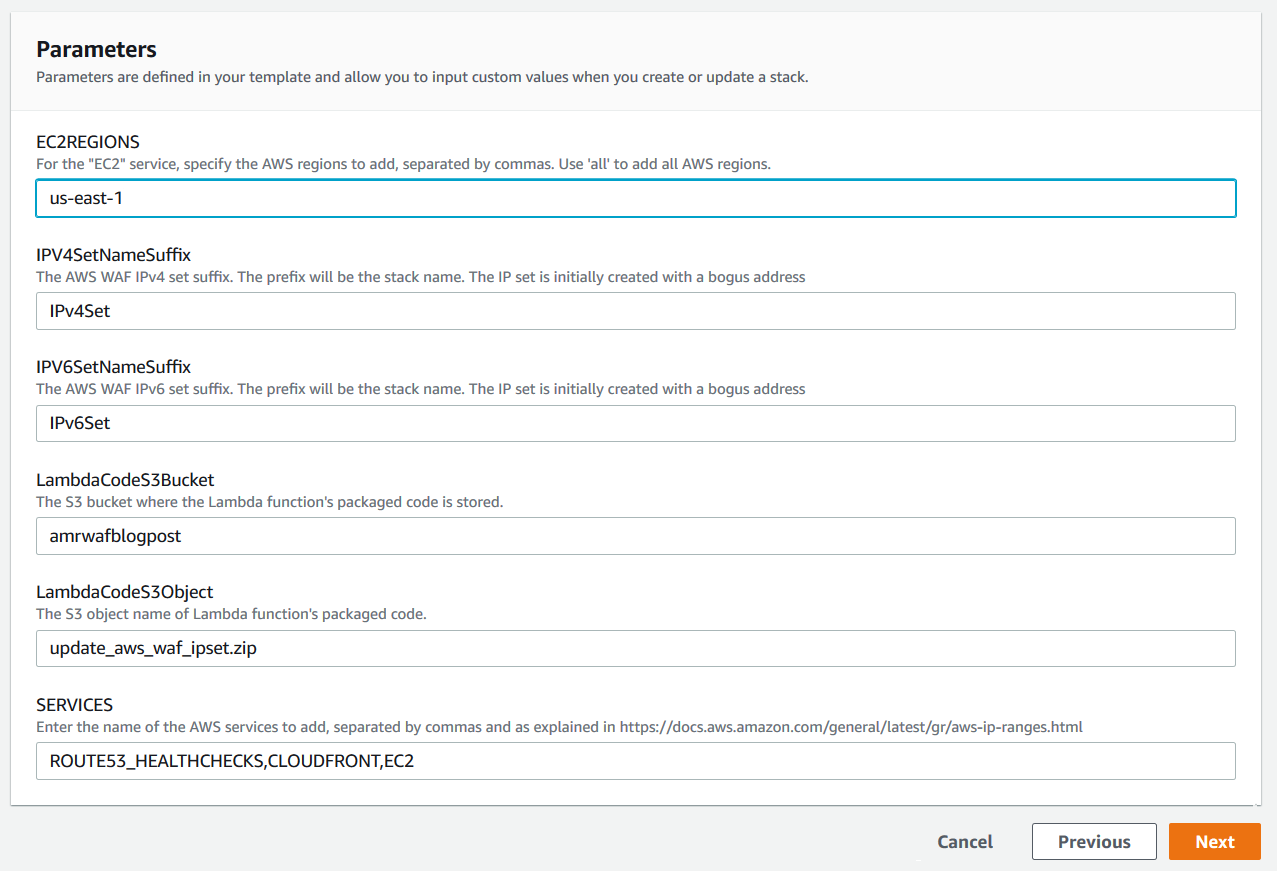 The parameters are as follows:

After you deploy the template, its status will change to CREATE_COMPLETE.

Solution deployment through the AWS CLI

You can also deploy the solution template through the AWS Command Line Interface (AWS CLI). On the solution’s GitHub page, in the Setup section, follow the instructions for deploying the solution by using AWS CLI commands.

Note: To use the AWS CLI, you must have set it up in your environment. To set up the AWS CLI, follow the instructions in the AWS CLI installation documentation.

Invoke the Lambda function for the first time

After you successfully deploy the CloudFormation stack, it’s required that you run an initial Lambda invocation so that the AWS WAF IP sets are updated with AWS services IPs. This Lambda invocation is only required once, and after this initial call, the solution will handle future updates on your behalf.

The success of the event will mean that the newly created AWS WAF IP sets now have the updated list of IPs from the services you’re working with.

You can also achieve Lambda function invocation through the AWS CLI by using the following command, where test_event.json is the test event I mentioned earlier.

You can use the documentation for invoking a Lambda function in the AWS CLI to explore this command and its parameters.

After successful invocation, status code 200 is returned on the AWS CLI to illustrate that invocation happened as expected. At this point, the AWS WAF IP sets are updated.

Use the solution IP sets in your AWS WAF web ACL

Now the AWS WAF IPv4 and IPv6 IP sets are populated, and you can obtain the IP lists either by using the AWS WAF console, or by calling the GetIPSet API through the AWS CLI command get-ip-set.

To use AWS WAF IP sets in your web ACL, see Creating and managing an IP set in the AWS WAF Developer Guide. You can use these IP sets in the same web ACL or rule group that contains the AWS Managed Rules Anonymous IP list and is associated to the AWS resource that AWS WAF is protecting. AWS WAF evaluation order and solution positioning within WebACL will be discussed in later section.

To validate the solution, let’s consider a scenario where you would like to allow requests from CloudFront to come through, while blocking any other anonymous and hosting provider sources. In this scenario, consider the following requests that are filtered by AWS WAF.

In the first one, a customer has the AWSManagedRulesAnonymousIpList rule group, and a request coming from an Amazon EC2 instance IP is blocked.

In the second request, this time coming in from CloudFront, you can see that AWS WAF didn’t block the request.

To achieve this result, you need to edit AWSManagedRulesAnonymousIpList and add a scope-down statement so that the rule set only blocks requests that aren’t sent from sources within this solution’s IPv4 and IPv6 IP sets.

Note: You can use the AWS WAF ListIPSets action or the list-ip-sets CLI command to obtain the IP set Amazon Resource Numbers (ARNs) and enter that information in the provided JSON.

After making this change, your rule editing page will look like the following. 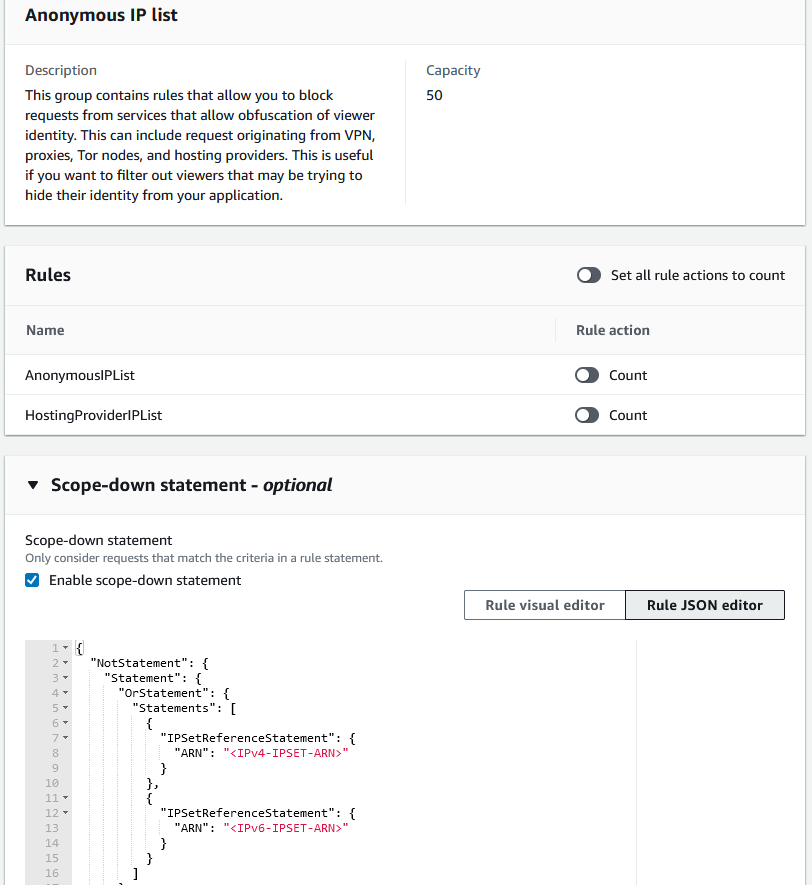 When you set the rule priority, consider using the AWSManagedRulesAnonymousIpList rule group with a lower priority than other rules within the web ACL. This causes that rule group to be evaluated prior to rules that are configured with terminating actions (that is, Allow and Block actions). The scope-down statement will match the request and allow traffic from the IP addresses within the IP set, and pass every other IP on to the next rule for further evaluation. Figure 4 shows an example of the suggested priority.

This blog post provides you with a solution that is capable of automatically updating AWS WAF IP sets with the list of current IP ranges for one or more AWS services. You can use this solution in various ways, such as to allow requests from Amazon CloudFront when you’re using the AWS Managed Rules Anonymous IP List.