For most customers today, security compliance auditing can be a very cumbersome and costly process. This activity within a security program often comes with a dependency on third party audit firms and robust security teams, to periodically assess risk and raise compliance gaps aligned with applicable industry requirements. Due to the nature of how audits are now performed, many corporate IT environments are left exposed to threats until the next manual audit is scheduled, performed, and the findings report is presented.

AWS Audit Manager can help you continuously audit your AWS usage and simplify how you assess IT risks and compliance gaps aligned with industry regulations and standards. Audit Manager automates evidence collection to reduce the “all hands-on deck” manual effort that often happens for audits, while enabling you to scale your audit capability in the cloud as your business grows. Customized control frameworks help customers evaluate IT environments against their own established assessment baseline, enabling them to discern how aligned they are with a set of compliance requirements tailored to their business needs. Custom controls can be defined to collect evidence from specific data sources, helping rate the IT environment against internally defined audit and compliance requirements. Each piece of evidence collected during the compliance assessment becomes a record that can be used to demonstrate compliance with predefined requirements specified by a control.

In this post, you will learn how to leverage AWS Audit Manager to create a tailored audit framework to continuously evaluate your organization’s AWS infrastructure against the relevant industry compliance requirements your organization needs to adhere to. By implementing this solution, you can simplify yet accelerate the detection of security risks present in your AWS environment, which are relevant to your organization, while providing your teams with the information needed to remedy reported compliance gaps.

This solution enables automated controls management using event-driven architecture with AWS Services such as AWS Audit Manager, AWS Lambda and Amazon S3, in integration with code management services like GitHub and AWS CodeCommit. The Controls owner can design, manage, monitor and roll out custom controls in GitHub with a simple custom controls configuration file, as illustrated in Figure 1. Once the controls configuration file is placed in an Amazon S3 bucket, the on-commit event of the file triggers a control pipeline to load controls in audit manager using a Lambda function.

This solution can be extended to create custom frameworks based on the controls, and to run an assessment framework against the controls.

Keep the default configurations from this page, such as Permissions and Data encryption. When done choose Complete setup.

Before deploying the solution, please ensure that the following software packages and their dependencies are installed on your local machine:

To provision the enterprise control catalog with AWS Audit Manager, start by cloning the sample code from the aws-samples repository on GitHub, followed by running the installation script (included in this repository) with sample controls and framework from your AWS Account.

To clone the sample code from the repository

On your development terminal, git clone the source code of this blog post from the AWS public repository:

To bootstrap CDK and run the deploy script

The CDK Toolkit Stack will be created by cdk bootstrap and will manage resources necessary to enable deployment of Cloud Applications with AWS CDK. 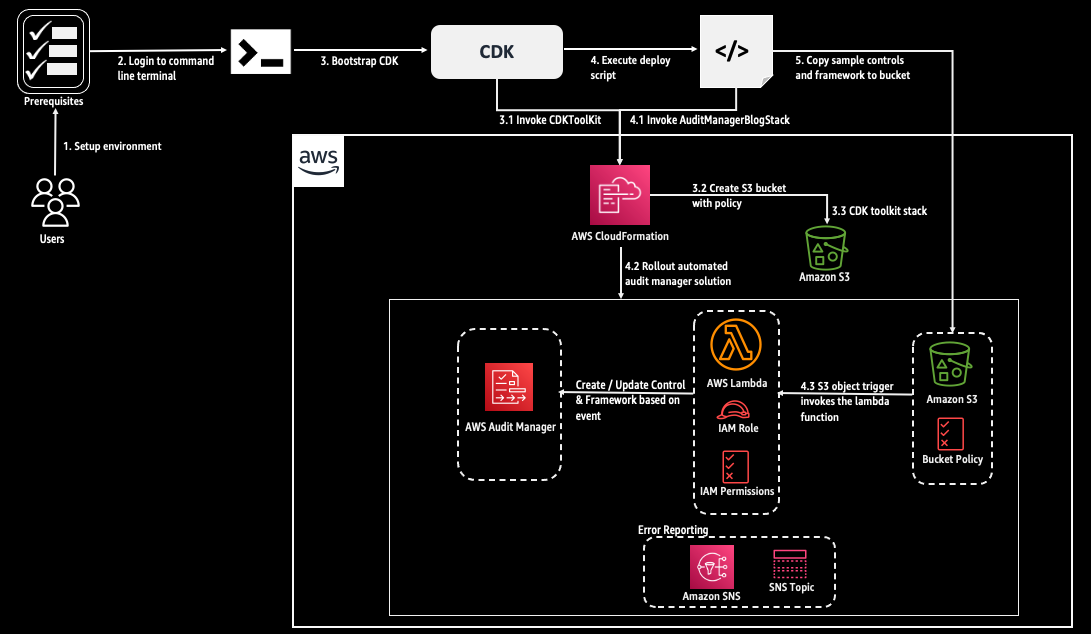 Once the solution is successfully deployed, you can view two custom controls and one custom framework available in AWS Audit Manager. The custom controls use a combination of manual and automated evidence collection, using compliance checks for resource configurations from AWS Config.

You have now successfully created the custom controls and framework using the proposed solution.

Next, you can create your own controls and add to your frameworks using a simple configuration file, and let the implemented solution do the automated provisioning.

To set up error reporting

Before you begin creating your own controls and frameworks, you should complete the error reporting configuration. The solution automatically sets up the error reporting capability using Amazon SNS, a web service that enables sending and receiving notifications from the cloud.

To create your own custom control as code

Follow these steps to create your own controls and frameworks:

description:
Information and records (data) are managed consistent with the organization’s risk strategy to protect the confidentiality, integrity, and availability of information.

To create your own custom framework as code

Congratulations, you have successfully created your new custom control and framework using the proposed solution.

An Audit Manager assessment is based on a framework, which is a grouping of controls. Using the framework of your choice as a starting point, you can create an assessment that collects evidence for the controls in that framework. In your assessment, you can also define the scope of your audit. This includes specifying which AWS accounts and services you want to collect evidence for. You can create an assessment from a custom framework  you build yourself, using steps from the Audit Manager documentation.

The solution provides the dynamic ability to design, develop and monitor capabilities that can be extended as a standardized enterprise IT controls catalogue for your company. With AWS Audit Manager, you can build compliance controls as code, with capability to audit your environment on a daily, weekly, or monthly basis. You can use this solution to improve the dynamic nature of assessments with AWS Audit Manager’s compliance audit, on time with reduced manual effort. To learn more about our standard frameworks to assist you, see Supported frameworks in AWS Audit Manager which provides prebuilt frameworks based on AWS best practices.