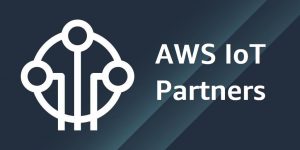 Gartner forecasts the number of connected devices will reach 25 billion by 2021. Each of those devices require a complex combination of hardware, operating systems, and software to connect to the cloud.

IHVs can also use their own MQTT and HTTPS clients on devices, such as microcontrollers, gateways, industrial PCs, PLCs, and SCADA systems and sensors. We qualify these solutions through the AWS Device Qualification Program.

AWS is now extending its IHV and Device Qualification Program to include AWS IoT Core Edge Software. Independent Hardware Vendors develop and maintain qualified IoT Core Edge Software applications and frameworks that run on devices at the edge. Edge software has built-in capability to aggregate and filter data collected at the edge and publish that data to AWS IoT Core.

By providing a consistent implementation across multiple devices, developers can maximize the portability of applications that are built on top of qualified edge software. The software frameworks meet the foundational compatibility, security, and scalability best practices required for large-scale Internet of Things (IoT) applications.

In this post, we will examine three qualified AWS IoT Edge Software offerings from Edge Software IHVs. We’ll look in-depth at how these IHVs solve specific business use cases, and provide real-world implementation examples on how customers can use these software frameworks to connect to AWS IoT.

Beckhoff is an APN Advanced Technology Partner with the AWS Industrial Software Competency.

There are a number of different software modules that address different applications and use cases, including connectivity, analytics, robotic motion automation, and human-machine interfaces (HMIs). Various modules can be combined to develop applications specific to a customer’s unique requirements. Supported communications protocols include TCP/IP, BACnet, HTTPS, Modbus-RTU/TCP, OPC UA, OPC DA, and MQTT.

TwinCAT3 applications can be developed using Visual Studio, where all the TwinCAT3 development environment and libraries are fully integrated into the IDE. Developers can choose to use PLC programming logic based on IEC61131-3, C, C++ or MATLAB/Simulink to build their real-time applications.

TwinCAT3 can serve as an IoT gateway to transmit data from the on-premises environment to AWS IoT. TwinCAT3 has a dedicated software module to securely connect, publish, and subscribe to AWS IoT Core using MQTT. Developers can define the MQTT topics within the application.

X.509 certificates are used for mutual authentication, and communication is encrypted using TLS 1.2. Users can take advantage of the native visual configuration interface within TwinCAT3 to configure a TwinCAT PLC to connect to AWS IoT Core.

In Figure 1, the TwinCAT IoT Data Agent is configured to connect a local PLC device and local OPC-UA server. The IoT Data Agent is publishing messages from those assets to AWS IoT Core and AWS IoT Greengrass device to transmit messages and receive cloud-to-device messages. 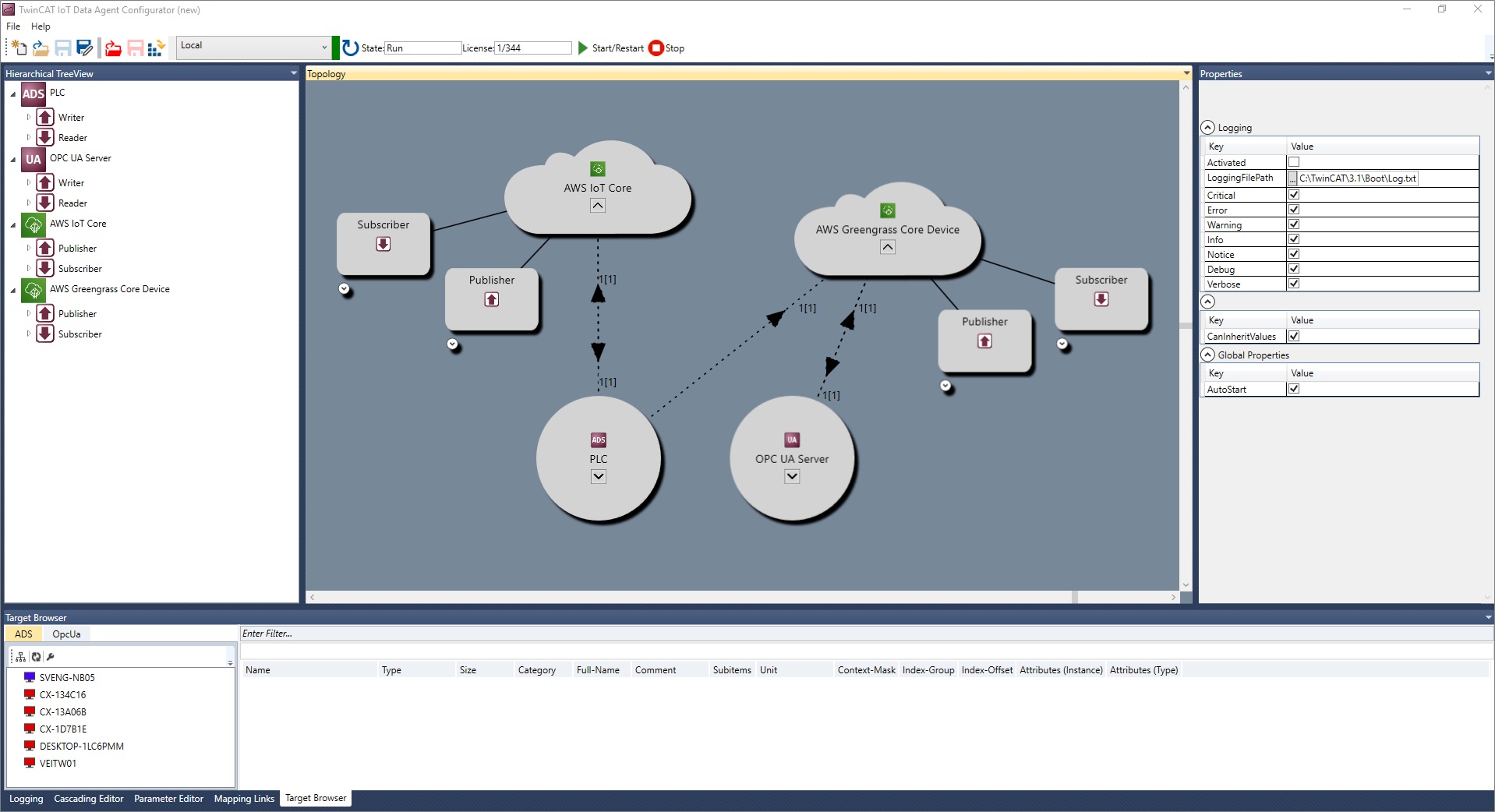 TwinCAT3 can interact with AWS IoT Greengrass software running on-premises, either on the same processor or another device within the same local network. Customers can select from a broad range of TwinCAT3 applications to connect and control industrial assets, and use AWS IoT Greengrass to process that data locally and publish to AWS IoT Core.

The following illustration shows the various connection methods to the AWS IoT Core. 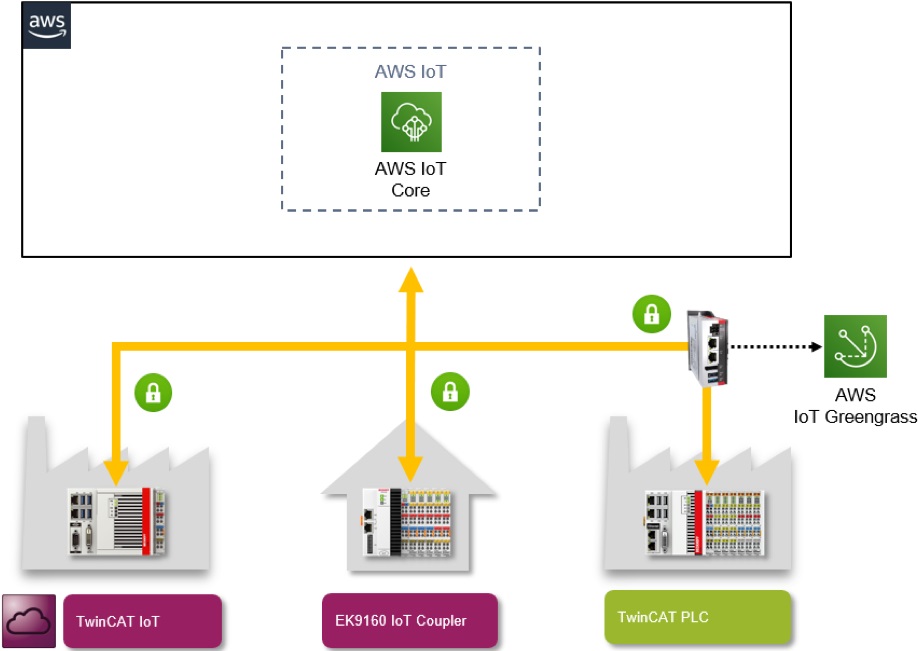 The TwinCAT3 software has the ability to interact with the shadow service within AWS IoT Core, publishing and subscribing to the reserved shadow topics. This makes it simple to synchronize state information between the edge environment and the cloud.

With this capability, developers can build applications that receive updates to the state of edge devices connected to TwinCAT3 via the shadow service, and respond appropriately with actions such as updating dashboards or triggering alerts.

Eurotech’s Everyware Software Framework (ESF) is a comprehensive and feature-rich software framework specifically designed to develop and deploy IoT applications at the edge.

ESF provides a full device abstraction layer allowing customers to manage the operating system, networking, local, and cloud connectivity from software APIs or local web interface. For example, customers can configure Ethernet settings from the web interface or with a few lines of Java code.

In Figure 3, you can see ESF’s software architecture and how it connects to AWS IoT.

To interact with these connected assets quickly, ESF provides a visual application composer called ESF Wires. Customers interact with the framework by using blocks and lines that describe assets and data flows.

In the following example, you can see an ESF Wires application that connects to a Modbus device and publishes data to AWS IoT Core. 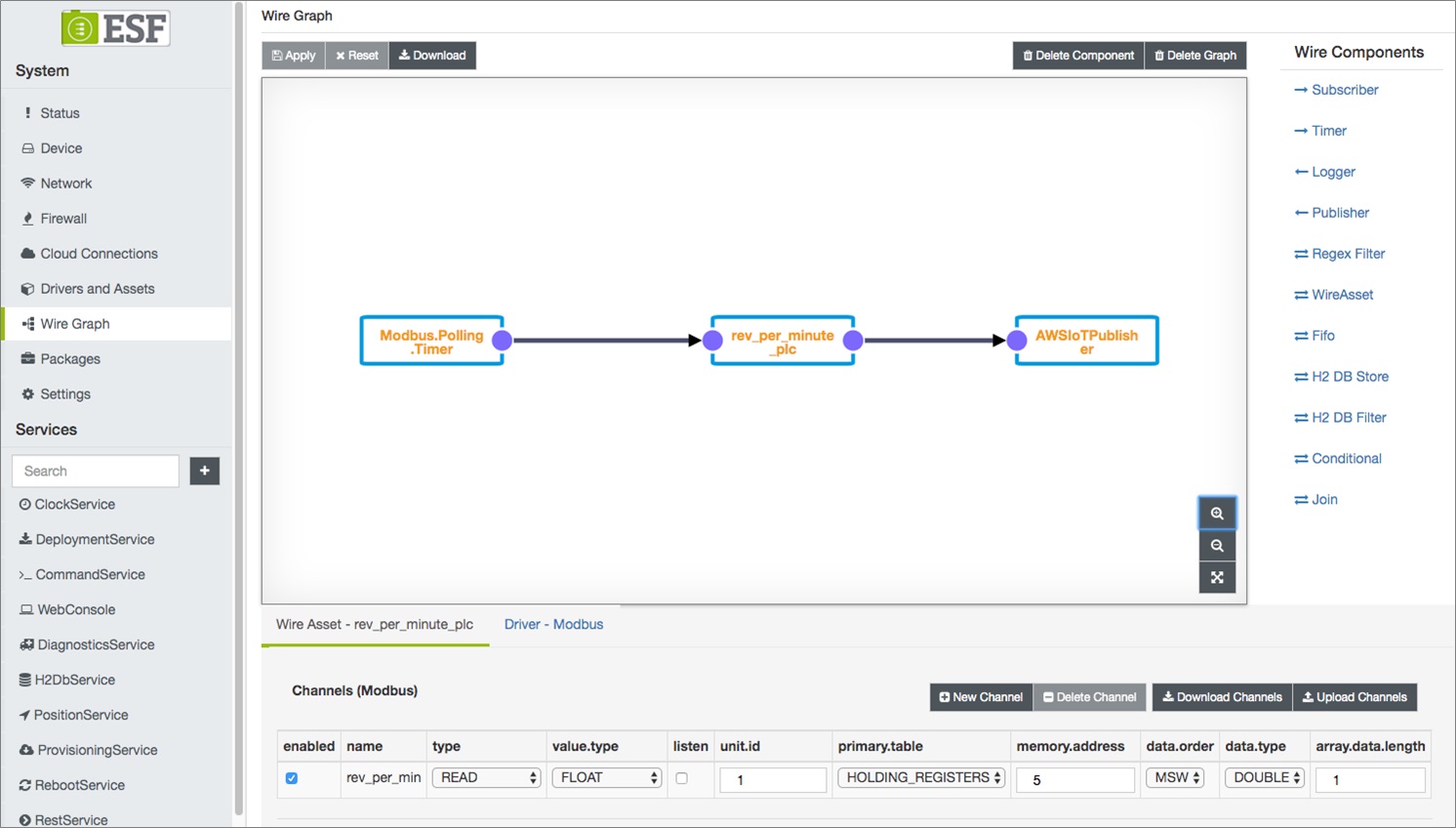 The Modbus.Polling.Timer component defines a set interval to poll the Modbus asset rev_per_minute_plc. ESF reads the Modbus register %IX1.5, rev_per_min, and then calls the AWSIoTPublisher component.

AWSIoTPublisher defines the topic in which the data should be published on; in this case ‘data/modbus/motor’. The data arrives on the specified topic in AWS IoT Core, which can be seen from the AWS IoT Core Test Console.

In addition to visual application prototyping, customers can develop IoT applications using the ESF Java libraries, which expose both physical and field-bus protocols over the same Java API used by Wires.

Dependency management is handled by OSGI (Open Service Gateway Initiative), which allows developers to quickly deploy applications and add new drivers to the software stack without interrupting the existing applications.

In this code snippet, you can see how to perform the same workflow as the ESF Wires example above using the Java APIs.

ESF runs on Linux-based devices, including the following devices listed in the AWS Partner Device Catalog: 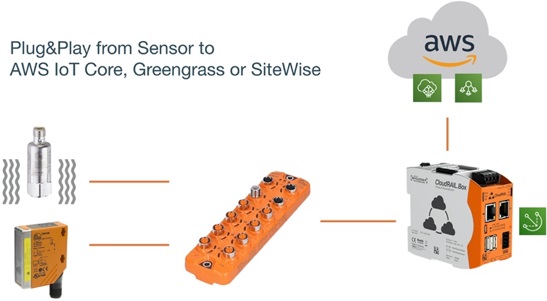 The CloudRail.Box is a platform enabling fast implementations of Industrial Internet of Things (IIoT) and Industry 4.0 automation projects. Based on a simple plug-and-play approach, the platform reduces complexity and eases configuration of and integration to industrial equipment.

Using the CloudRail.Box, connecting an industrial sensor to AWS IoT takes less than a minute instead of days or even weeks. Here are the steps.

CloudRail works with any sensor that supports the IO-Link standard, digital sensors, and even analog ones using an IO-Link adapter. Sensors are being connected to so-called IO-modules, which talk to the CloudRail.Box via Ethernet. 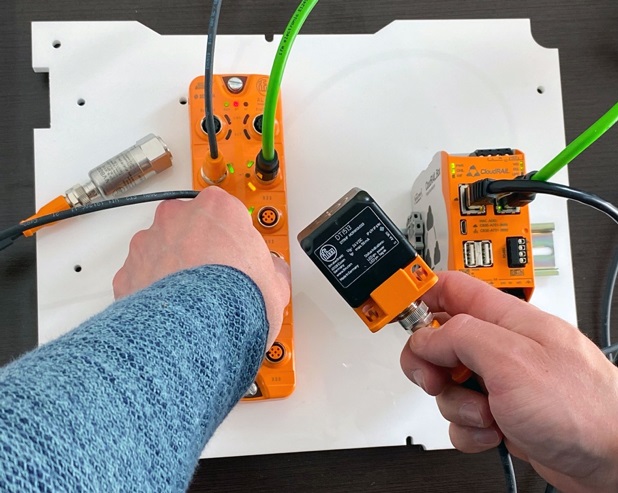 The CloudRail.Box automatically detects all connected IO-modules and sensors. Using the CloudRail Device Management Cloud web app, you can configure the CloudRail.Box deployment using the Box Configuration tool, as shown in Figure 8 below.

Once the IO-modules and sensors are discovered, select one and click Next. In this example, we’ll connect an RFID reader to AWS IoT. 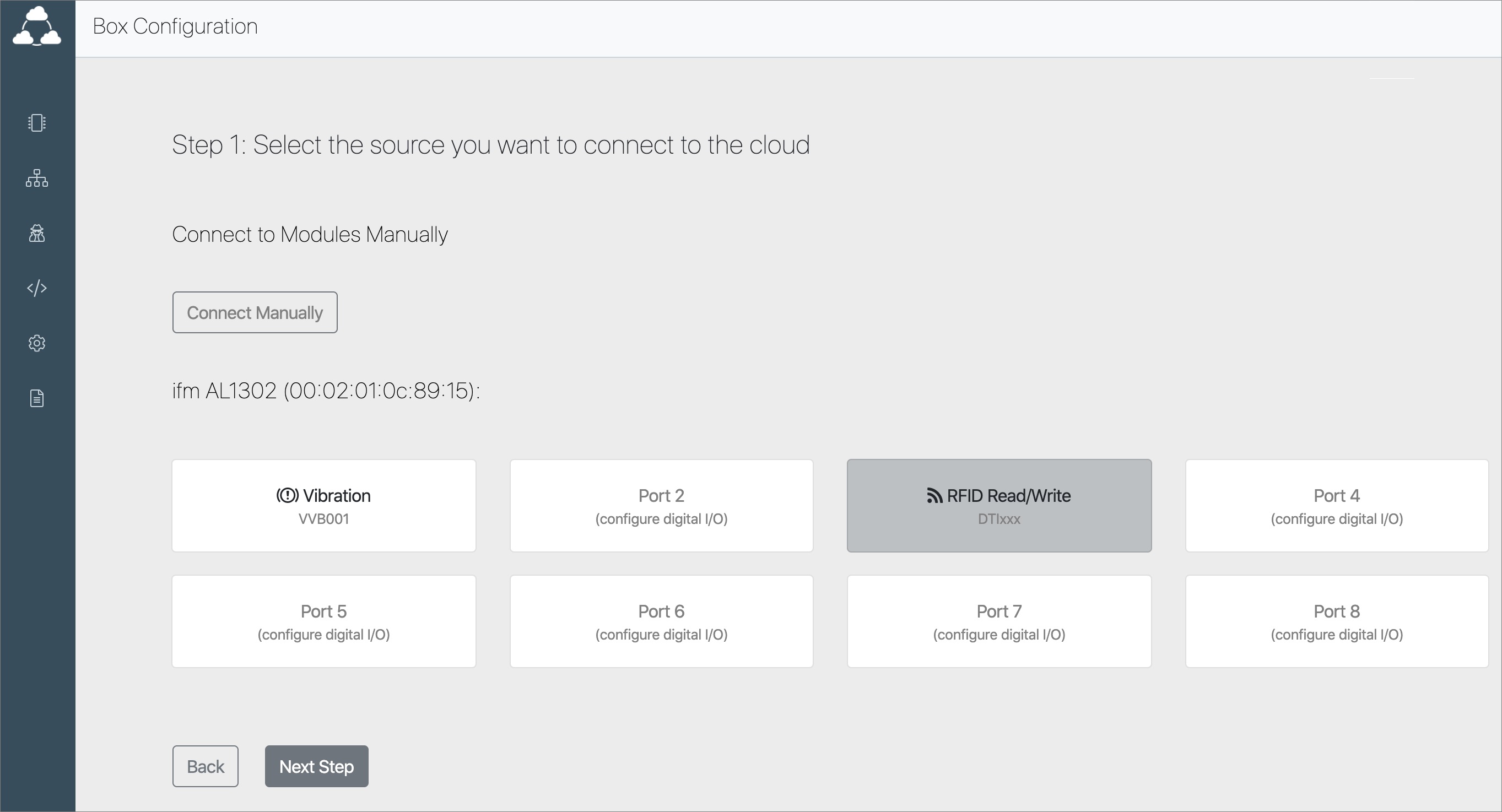 CloudRail supports several AWS IoT services. Users can choose between a direct connection to AWS IoT Core or AWS IoT SiteWise, or connect the sensor to a local AWS IoT Greengrass instance running on the CloudRail.Box. 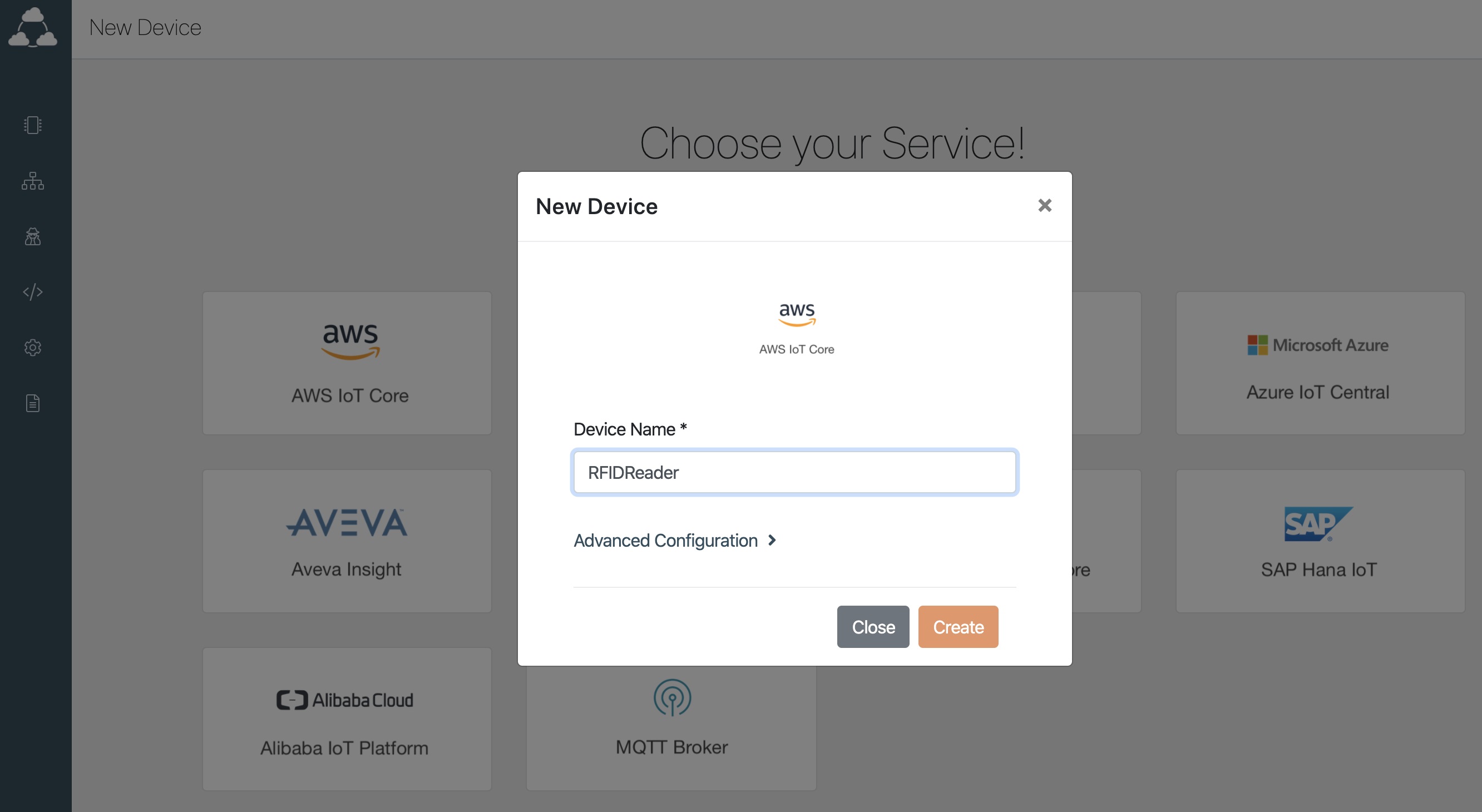 CloudRail automatically provisions sensors as new devices in the AWS IoT Core device registry through an API, retrieves the necessary X.509 certificates, and configures the local MQTT client. All this happens automatically in the background. The user just gets the generated MQTT topic, as well as documentation about the data schema. 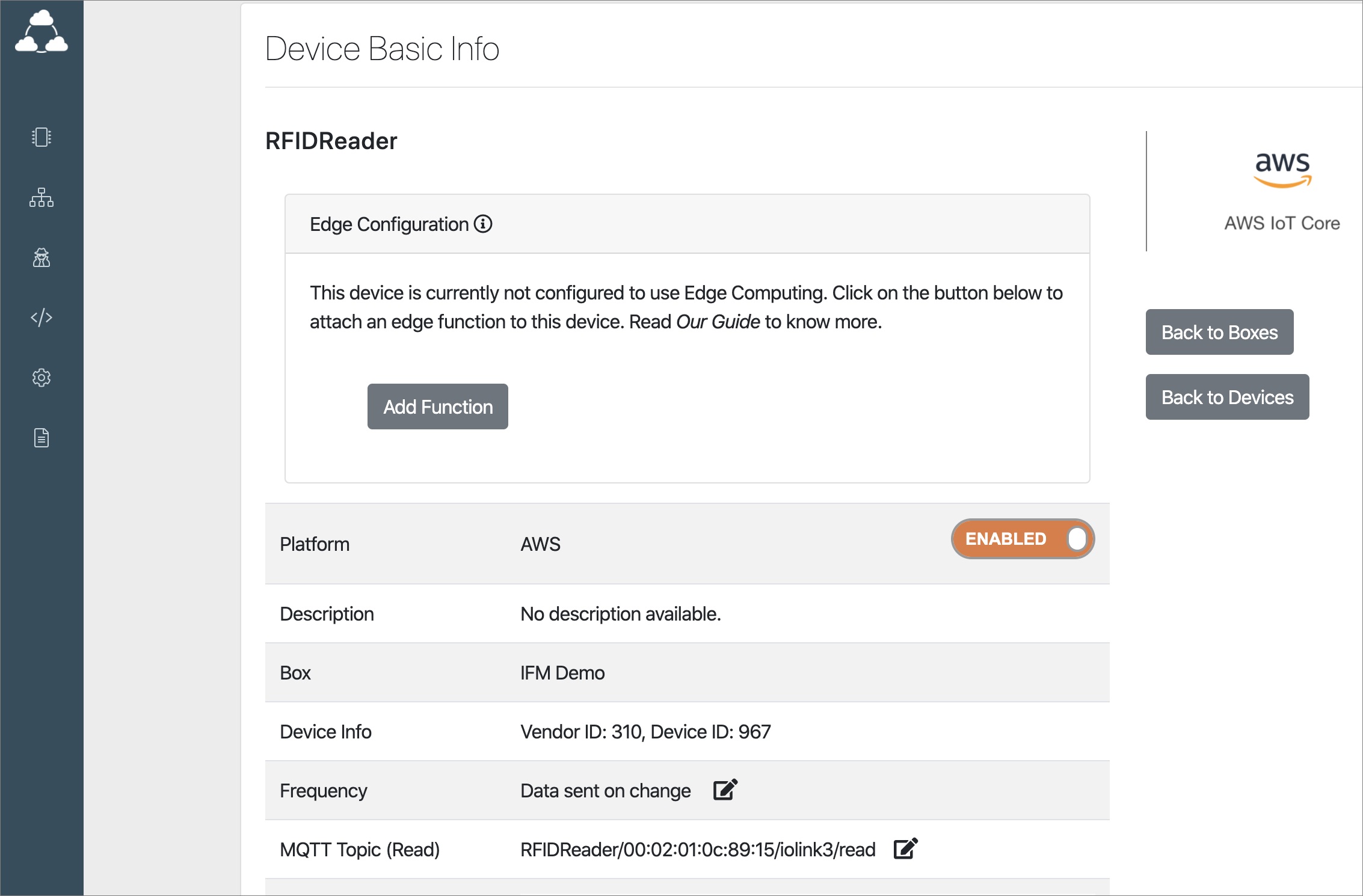 The sensor now sends data to AWS IoT Core in a well-structured and automatically generated JSON object. This allows developers to immediately start building applications on top of it without the need of understanding the sensor or performing data transformations. 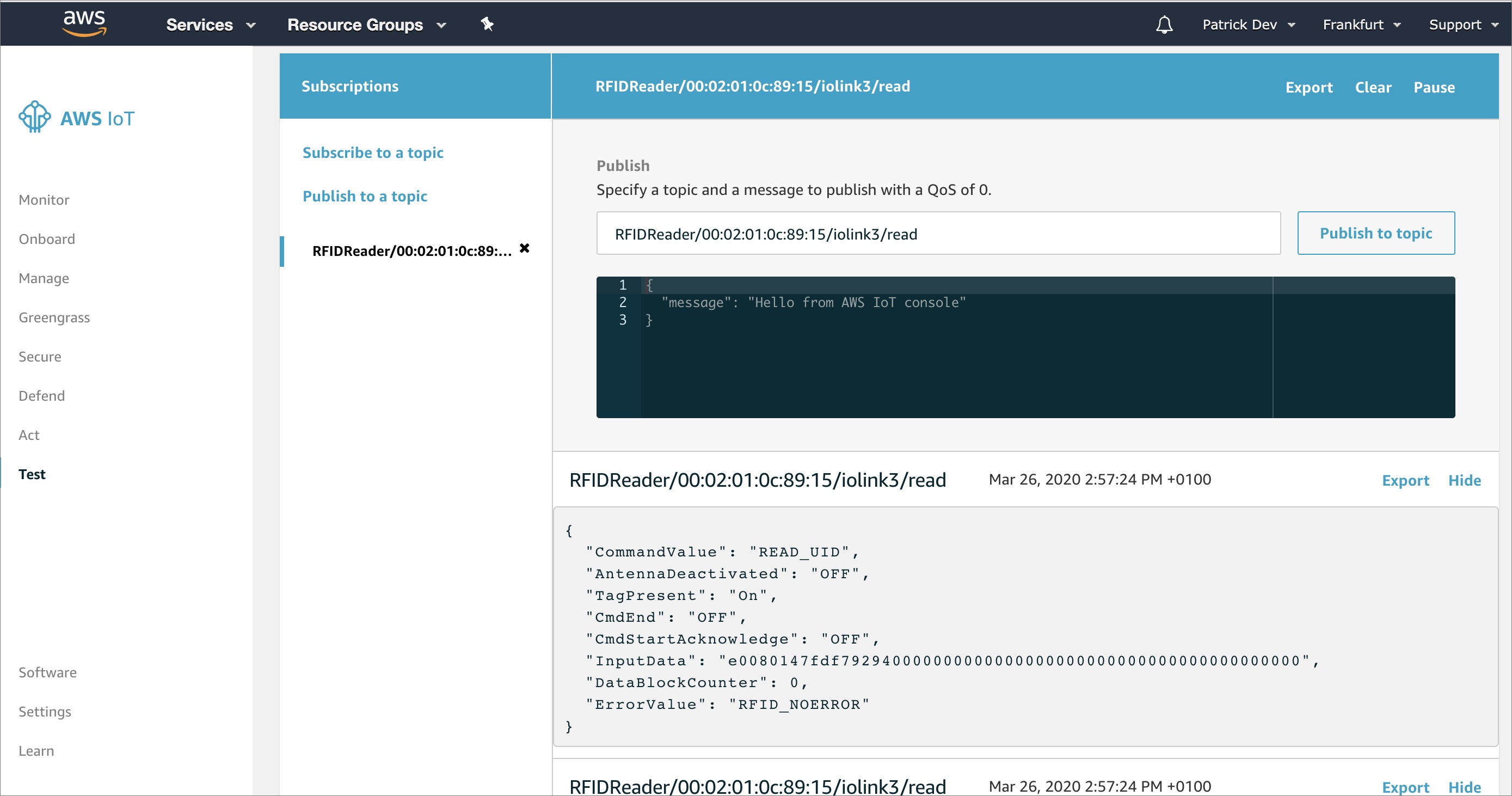 The CloudRail.Box has firmware pre-installed that automatically connects to and is managed remotely by the CloudRail Device Management Cloud. This is a central place to manage your CloudRail.Box, including remote firmware upgrades, deployment of edge computing functions, and orchestration of the data streams from your connected IO-modules and the attached sensors/actuators. 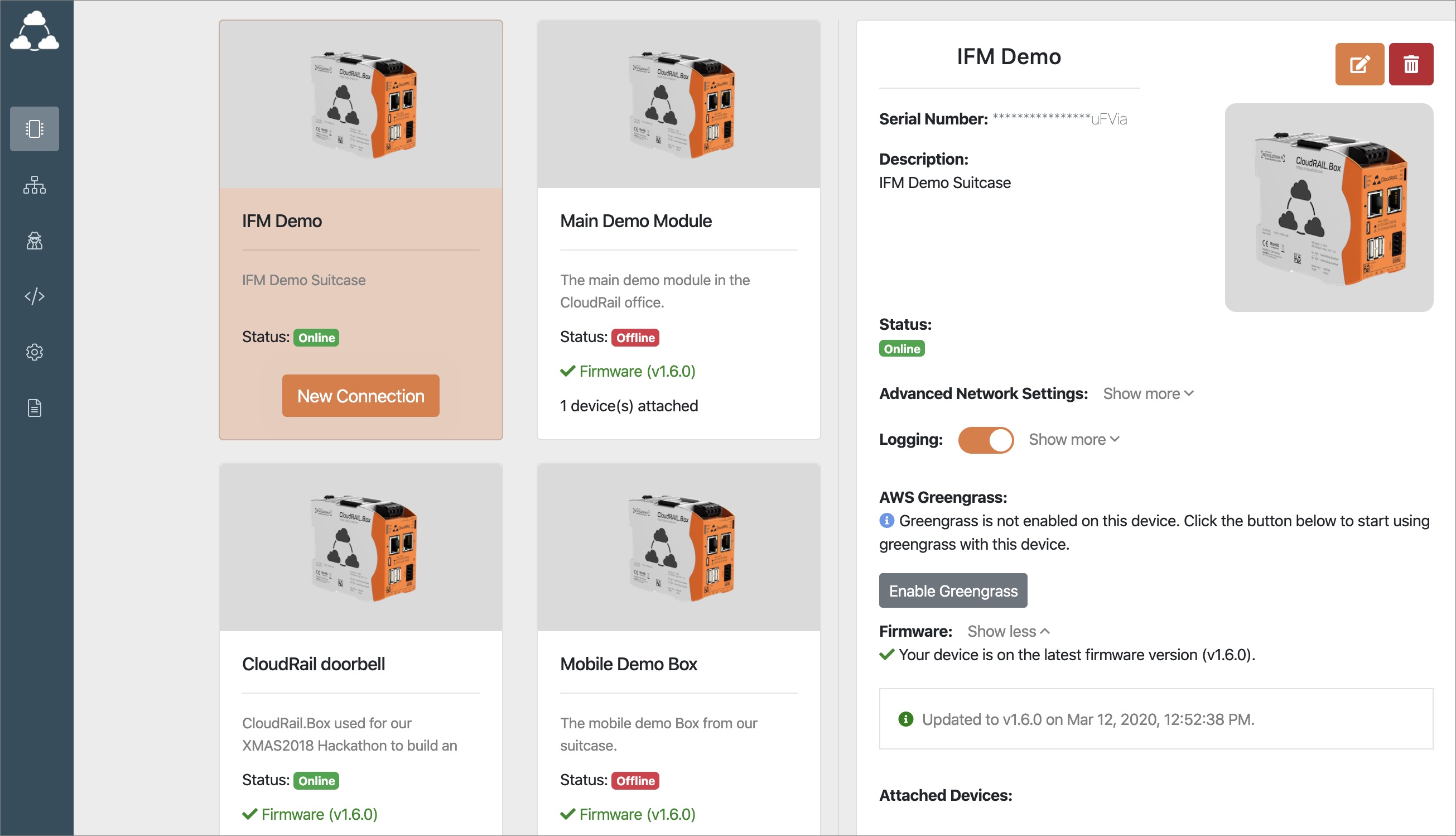 This managed configuration platform is hosted by CloudRail and enables customers to configure their CloudRail.Box devices to publish data directly to AWS IoT Core, AWS IoT SiteWise, or an AWS IoT Greengrass instance which runs locally on the CloudRail.Box.

All data coming from the sensors connected to a CloudRail.Box device always flows directly to AWS IoT Core. No process data ever passes through the CloudRail cloud. This means lower latency, and no data privacy issues.

CloudRail provides a platform for customers to build rapid prototypes and proof of concepts, and is suitable up to a large scale deployment.

Instead of focusing on integrating AWS IoT connectivity and features, you can focus on building the applications that immediately bring value to your business.

Customers looking for qualified devices or edge software are able to search through the AWS Partner Device Catalog. We have more than 300 solutions from 150 AWS IoT Partners, including everything from cameras in building security to programmable logic controllers used in manufacturing environments.