VPC peering enabled instances in different VPCs to communicate with each other as if they were within the same network.

For routing across multiple regions, peering could be applied to AWS Transit Gateways to enable traffic flow, and it requires static routes to be configured and maintained.

There’s another approach that can be effective when applied to multiple regions, and that’s using a virtual router service such as Megaport Cloud Router (MCR).

Megaport is an AWS Advanced Technology Partner and global network as a service provider transforming the way businesses connect to the Amazon Web Services (AWS) Cloud.

Megaport has earned the AWS Networking Competency and AWS Direct Connect Service Delivery designation, meaning we have been validated by AWS Partner Solutions Architects as experts in delivering specific AWS services for customers.

In this post, I will walk you through different network designs and make clear the advantages of using Megaport Cloud Router with AWS Transit Gateway as a way to route traffic across multiple AWS Regions.

VPC Peering Within a Region

Prior to AWS Transit Gateway, VPC peering was used to enable the flow of traffic between VPCs.

However, VPC peering’s non-transitive nature limits its use cases. To understand why, let’s examine the scenario in Figure 1.

Figure 1 – In this scenario, VPC B and VPC C cannot communicate with each other.

For VPC B and VPC C to communicate, direct peering must be established between the two, as shown in Figure 2.

Figure 2 – To communicate with each other, VPC B and VPC C require direct peering.

These VPC peering relationships would have to be stitched together one by one. The routing table in each VPC would also require updates to enable traffic flow.

For three VPCs, this may be manageable, but as you begin to scale out your cloud environment this becomes complex and administratively burdensome. 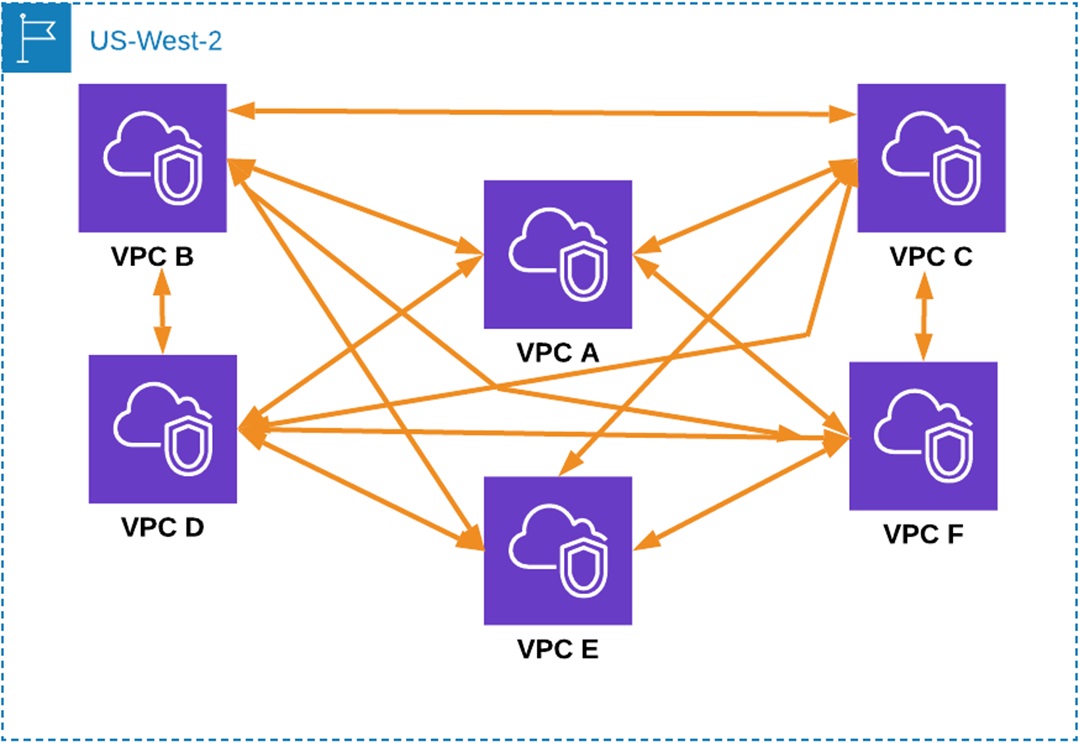 Here, you can see a direct peering table for multiple VPCs: 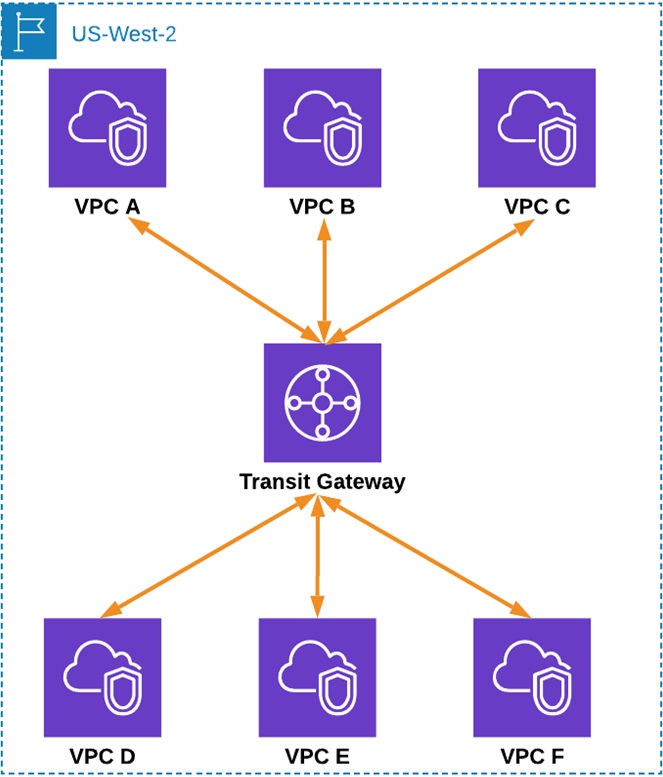 Figure 4 – AWS Transit Gateway acting as the hub between VPCs.

A single transit gateway can handle 10,000 routes, scale up to 50Gbps per VPC attachment in each AWS Availability Zone, and connect up to 5,000 VPCs in a single region.

What If You Need to Route Traffic Between Multiple Regions?

If you choose this solution, be sure to take into consideration your organization’s tolerance for managing static routes.

An alternate solution that provides a number of advantages is the Megaport Cloud Router. It’s a virtual router service that simplifies inter-region connectivity between AWS Transit Gateways without the need for inter-region peering.

Topology of a Multi-Region Solution 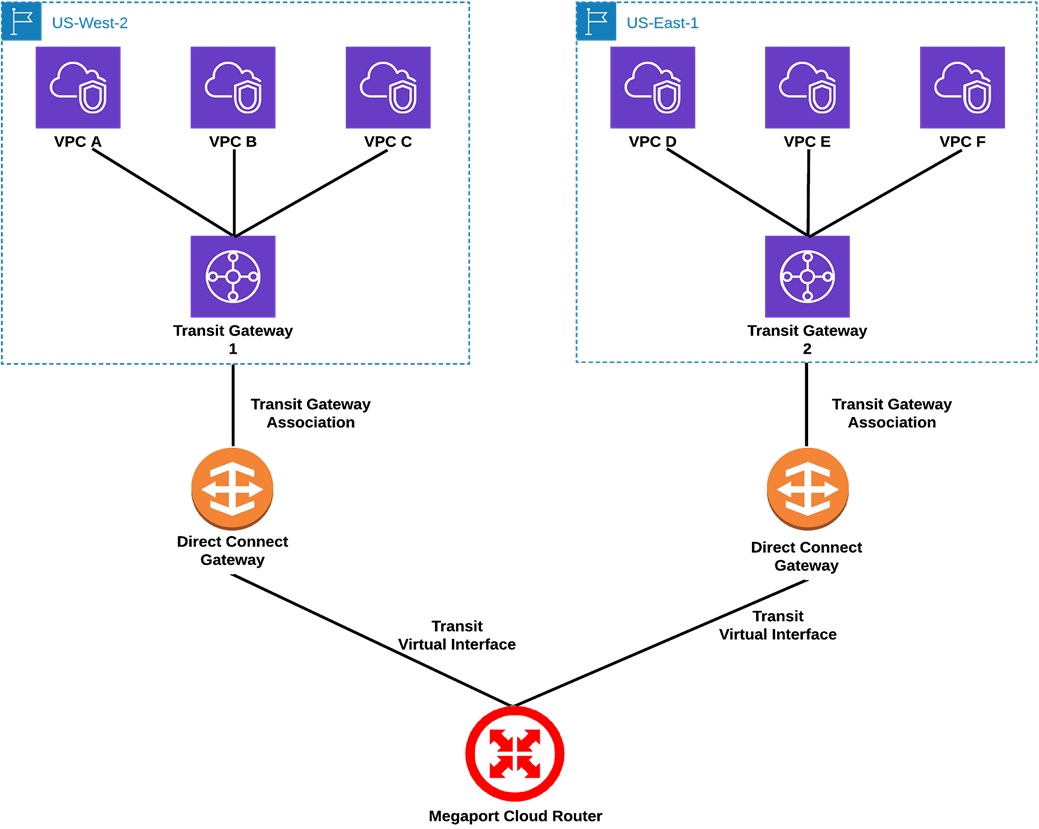 The Megaport Cloud Router is a hosted router appliance managed by Megaport on their network as a service. Megaport is responsible for the network deployment, connectivity, baseline configuration, licensing, and maintenance of the router appliances.

You specify the AWS environment you want to connect your cloud router to, and the BGP parameters for connectivity. As your infrastructure in AWS scales, the number of VPCs increases.

The following elements are required:

Once this network structure has been set up, the MCR acts as a central router, dynamically exchanging routes between the two AWS Transit Gateways.

A virtual router service such as Megaport Cloud Router (MCR) routes traffic across AWS regions with dynamic routing. MCR is a virtual routing service maintained by Megaport. All you do is set up your AWS environment and forward its configuration to Megaport, which handles the rest.

For further in-depth review, read our article on how to deploy this solution: AWS Transit Gateway Inter-Region Routing with MCR.

Megaport is an AWS Competency Partner and global network as a service provider transforming the way businesses connect to the AWS Cloud.