In this post, you will learn how to build a Hyperledger Fabric blockchain network using Managed Blockchain. After creating the Fabric network, you deploy a three-tier application that uses the network to track donations to a nonprofit organization. Nonprofits want to provide visibility to their supporters and transparency into how they are spending donations. For each donation made by a donor, Hyperledger Fabric tracks the specifics of how the donation is spent. Donors can use this information to decide whether the nonprofit is spending their donations as they had anticipated.

Blockchain is suitable for this scenario because it promotes trust between all members in the network, including donor organizations, investors, philanthropic institutions, suppliers, and the nonprofit itself. All members in the network have their own immutable, cryptographically secure copy of the donation and spending records. They can then independently review how effectively donations are spent. This transparency could lead to increased efficiency and insight into lowering costs for nonprofits.

The application consists of the following tiers:

This architecture provides loose coupling and abstraction in such a way that the end user of the application is not exposed to the inner workings of a Hyperledger Fabric network. In fact, besides a slider component on the user interface showing the blocks received from the Fabric network, there is no indication to the end users that the underlying technology is blockchain.

This loose coupling extends to the user interface developers, who simply use the functionality provided by the RESTful API and don’t need to know anything about Hyperledger Fabric or chaincode. Loose coupling therefore allows development of applications with a familiar look and feel, whether they be web, mobile, or other types of applications.

The rest of this article is divided into four sections, each discussing the different layers of the architecture, as follows:

A request by an end user would flow through the layers as shown in Figure 1. Activity by a user on the user interface would result in a REST API call to the RESTful API server. In turn, this would use the Fabric SDK to interact with the Hyperledger Fabric components in Managed Blockchain to invoke a transaction or query data.

The Git repository that accompanies this post contains the artifacts that are required to finish parts 1–4 to create the end application:

Each part in this post is associated with a matching part in the Git repo. As we progress through each part, the post elaborates on the steps in the README files in the accompanying repo.

Note that executing the steps in this post consumes AWS resources that will be billed at the applicable rates.

Let’s get started with Part 1.

Enter a name for the initial member that you want to add to your network. A member is the equivalent of a Hyperledger Fabric organization and often maps to a real-world organization. If you consider a Fabric network to be made up of a consortium of organizations that want to transact with each other, a member would be one of the organizations in the consortium.

Finally, enter an administrator user name and password for the member. Each member in an Amazon Managed Blockchain network has its own certificate authority (CA) that is responsible for registering and enrolling the users for this member. Entering this information here defines an identity that has the administrator role for this Hyperledger Fabric member.

After reviewing the details that you entered, create the network and member.

For additional details about these steps, see Part 1, Step 1: Create the Hyperledger Fabric blockchain network in the accompanying repository.

Managed Blockchain is a fully managed service. It creates and manages shared components such as the Hyperledger Fabric ordering service and the Fabric CA for each member, and it exposes them with endpoints. In a future step, you use virtual private cloud (VPC) endpoints to make the endpoints of these components available to a VPC in your account.

After your Hyperledger Fabric network and member have an ACTIVE status, it’s time to create a Fabric peer node. Peer nodes are where Fabric smart contracts execute (for example, chaincode). Peer nodes also contain the Fabric ledger, which consists of two parts: a journal that holds a cryptographically immutable transaction log (or “blockchain”) and a key-value store known as the world state that stores the current state of the ledger.

Like the ordering service and CA, each member’s peer nodes are managed by Amazon Managed Blockchain and can be accessed from your VPC via a VPC endpoint.

At this stage, you have a Hyperledger Fabric network with a highly available ordering service and CA, and a single peer. For the remainder of this post, we remain with this single-member network to reduce the scope. However, in a more robust test or production scenario that would simulate a multimember decentralized network, you could use the Amazon Managed Blockchain console or API to invite other members to join the network. In a follow-up blog post, we will walk through these steps.

Now, you need a way to interact with the Fabric network so that you can create channels, install chaincode, and invoke transactions.

Creating a Hyperledger Fabric client node in your VPC

As shown in Figure 2, the Hyperledger Fabric components managed by Amazon Managed Blockchain are accessed via a Fabric client node (for example, Client A), which you provision in a VPC in your account. The Fabric client node hosts the open source Hyperledger Fabric CLI and allows you to interact with your Fabric network via the VPC endpoint. All network traffic between your VPC and your managed Fabric network occurs over the AWS backbone and is not exposed to the public internet. 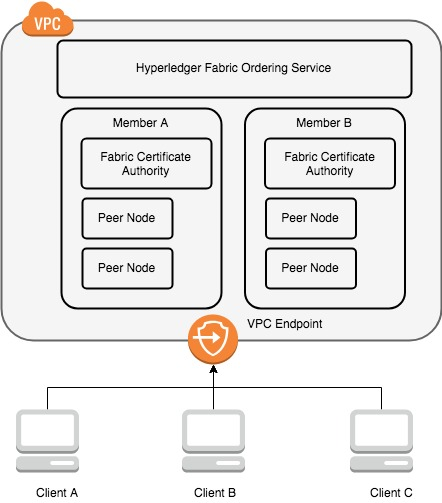 You use AWS CloudFormation to provision a new VPC in your AWS account, an Amazon EC2 instance configured as your Fabric client node, and the VPC endpoint to communicate with your Fabric network.

Part 1, Steps 3 and 4 in the GitHub repo explain how to provision and prepare your Fabric client node. Don’t forget to follow the prerequisites in Part 1 to create your AWS Cloud9 environment. AWS Cloud9 is a cloud-based integrated development environment (IDE) that lets you write, run, and debug your code with just a browser. However, you won’t be using the IDE functions. You’ll use the Linux command line provided by AWS Cloud9 because it comes pre-installed with some of the packages we need, such as the AWS CLI.

From the Fabric client node, you now create a channel on the Fabric network. Channels in Hyperledger Fabric are the means by which applications and peer nodes interact and transact privately with each other. A Fabric network can support many channels where each channel has a different combination of members.

The process for creating a channel includes creating a channel config file (configtx.yaml), which contains channel definitions in the form of profiles. You use the Hyperledger Fabric channel configuration (configtxgen) tool to generate a binary channel creation transaction file based on one of the profiles from configtx.yaml. Then you submit the channel creation transaction file to the Fabric ordering service where the channel is created. Block 0, the channel genesis block, is created at this point. It is added to the channel and returned to the peer node where it can be used to join the peer to the channel.

To create the channel and install and instantiate the chaincode, follow Steps 5–9 in Part 1 in the GitHub repo.

Querying the chaincode and invoking transactions

At the end of Part 1, you’ve done the following:

Part 2: Deploy and test the chaincode for nonprofit transactions

Deploying chaincode is a process that you became familiar with in Part 1. The only difference in Part 2 is that you take the chaincode for the nonprofit application from the repo and deploy that, rather than deploying the sample chaincode that is already present on the Hyperledger Fabric client node.

To copy, install, and instantiate the nonprofit chaincode on the channel, follow the steps in Part 2: Non-profit (NGO) Chaincode in the GitHub repo.

The RESTful API server is a Node.js Express application that uses the Hyperledger Fabric Client SDK to interact with the Fabric network. As mentioned previously, the Hyperledger Fabric Client SDK provides a wealth of functionality. It includes APIs to create and join channels, install and instantiate chaincode, and query blockchain metadata such as block heights and channel configuration information. In this post, we use a subset of SDK functionality that allows us to query chaincode and invoke transactions.

How does the RESTful API Node.js application connect to the Fabric network? There are two options:

Follow the steps in Part 3: RESTful API to expose the Chaincode to deploy the Node.js RESTful API server.

The user interface application is a Node.js/Angular application that calls the API provided by the RESTful API server. It does not use the Hyperledger Fabric Client SDK nor does it have any connectivity to the Fabric network. Instead, each action in the application invokes a corresponding REST API function.

It’s also worth noting that all application data is owned by the Fabric network. Besides the images displayed in the gallery, all data is retrieved from the Fabric world state database via the RESTful API and the Fabric chaincode. The application provides functionality that allows donors to track how their donations are spent and includes the following functions:

Follow the steps in Part 4: The User Interface to deploy the Node.js user interface application.

Well done on completing the steps in this post. You built a Hyperledger Fabric network using Amazon Managed Blockchain and deployed a multi-tier application consisting of chaincode, a RESTful API, and a user interface application. You also deployed a working application that uses blockchain as its underlying data source.

Besides the slider component on the user interface showing the blocks received from the Hyperledger Fabric network, there is no indication to the end users that the underlying technology is blockchain. We have abstracted the application from the blockchain using a REST API that could support multiple channels such as web and mobile, and we provided block notifications via a standard WebSocket protocol.

For a test network to simulate this application on a decentralized architecture, the next step would be to add more members to the Fabric network and have those members provision peers that join the same channel. This will be the topic of a future blog post.

Thanks to the following people:

After creating your Fabric network you might want to create a multi-member decentralized network by adding new members to the network. The steps to do this can be found in the next blog post: Add new members to a Hyperledger Fabric channel on Amazon Managed Blockchain.