The portfolio of AWS storage products has grown increasingly rich and diverse over time. Amazon S3 started out with a single storage class and has grown to include storage classes for regular, infrequently accessed, and archived objects. Similarly, Amazon Elastic Block Store (EBS) began with a single volume type and now offers a choice of four types of SAN-style block storage, each designed to be a great for a particular set of access patterns and data types.

With object storage and block storage capably addressed by S3 and EBS, we turned our attention to the file system. We announced the Amazon Elastic File System (EFS) last year in order to provide multiple EC2 instances with shared, low-latency access to a fully-managed file system.

I am happy to announce that EFS is now available for production use in the US East (N. Virginia), US West (Oregon), and Europe (Ireland) Regions.

We are launching today after an extended preview period that gave us insights into an extraordinarily wide range of customer use cases. The EFS preview was a great fit for large-scale, throughput-heavy processing workloads, along with many forms of content and web serving. During the preview we received a lot of positive feedback about the performance of EFS for these workloads, along with requests to provide equally good support for workloads that are sensitive to latency and/or make heavy use of file system metadata. We’ve been working to address this feedback and today’s launch is designed to handle a very wide range of use cases. Based on what I have heard so far, our customers are really excited about EFS and plan to put it to use right away.

Why We Built EFS
Many AWS customers have asked us for a way to more easily manage file storage on a scalable basis. Some of these customers run farms of web servers or content management systems that benefit from a common namespace and easy access to a corporate or departmental file hierarchy. Others run HPC and Big Data applications that create, process, and then delete many large files, resulting in storage utilization and throughput demands that vary wildly over time. Our customers also insisted on high availability, and durability, along with a strongly consistent model for access and modification.

Amazon Elastic File System
EFS lets you create POSIX-compliant file systems and attach them to one or more of your EC2 instances via NFS. The file system grows and shrinks as necessary (there’s no fixed upper limit and you can grow to petabyte scale) and you don’t pre-provision storage space or bandwidth. You pay only for the storage that you use. 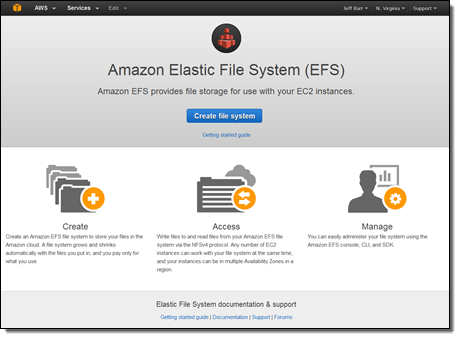 EFS protects your data by storing copies of your files, directories, links, and metadata in multiple Availability Zones.

Each Elastic File System is accessible from a single VPC, and is accessed by way of mount targets that you create within the VPC. You have the option to create a mount target in any desired subnet of your VPC. Access to each mount target is controlled, as usual, via Security Groups.

EFS offers two distinct performance modes. The first mode, General Purpose, is the default. You should use this mode unless you expect to have tens, hundreds, or thousands of EC2 instances access the file system concurrently. The second mode, Max I/O, is optimized for higher levels of aggregate throughput and operations per second, but incurs slightly higher latencies for file operations. In most cases, you should start with general purpose mode and watch the relevant CloudWatch metric (PercentIOLimit). When you begin to push the I/O limit of General Purpose mode, you can create a new file system in Max I/O mode, migrate your files, and enjoy even higher throughput and operations per second.

Elastic File System in Action
It is very easy to create, mount, and access an Elastic File System. I used the AWS Management Console; I could have used the EFS API, the AWS Command Line Interface (CLI), or the AWS Tools for Windows PowerShell as well.

I opened the console and clicked on the Create file system button:

Then I selected one of my VPCs and created a mount target in my public subnet: 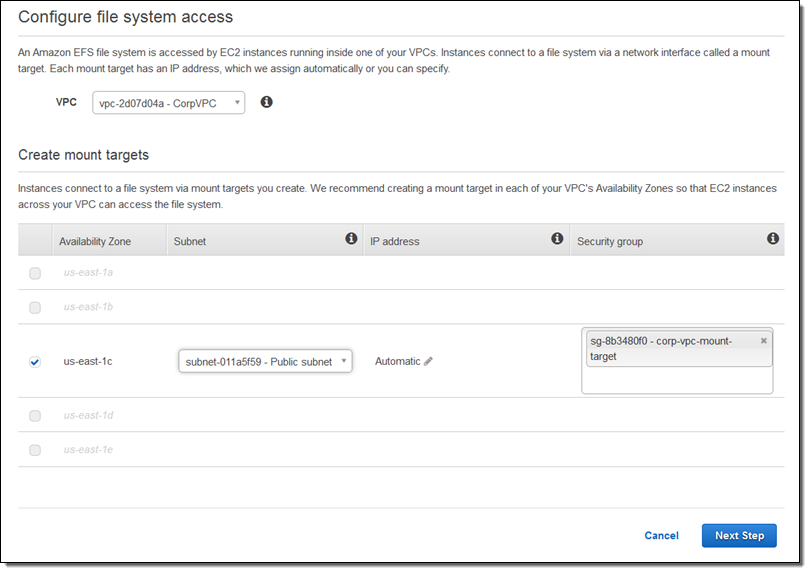 My security group (corp-vpc-mount-target) allows my EC2 instance to access the mount point on port 2049. Here’s the inbound rule; the outbound one is the same:

I added Name and Owner tags, and opted for the General Purpose performance mode: 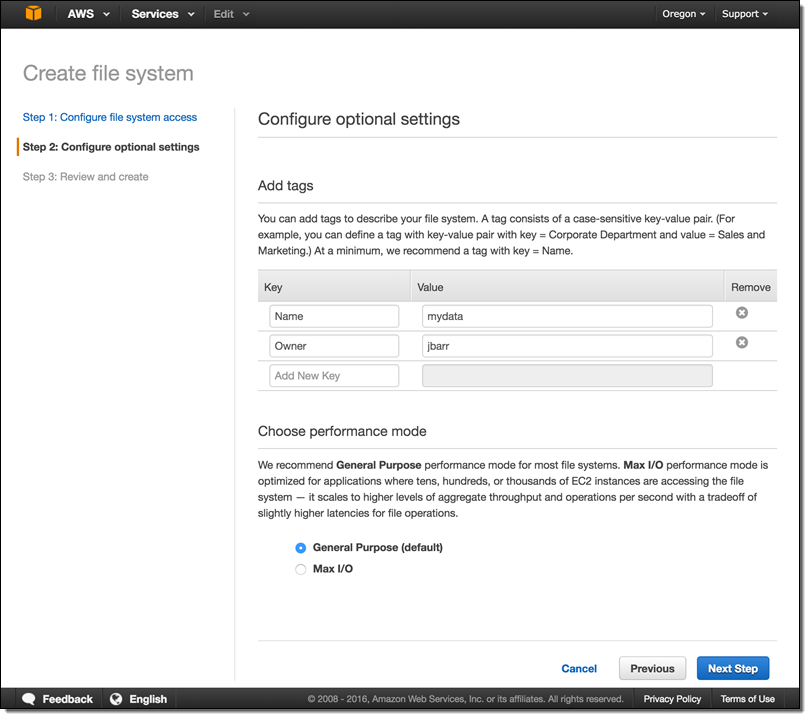 Then I confirmed the information and clicked on Create File System: 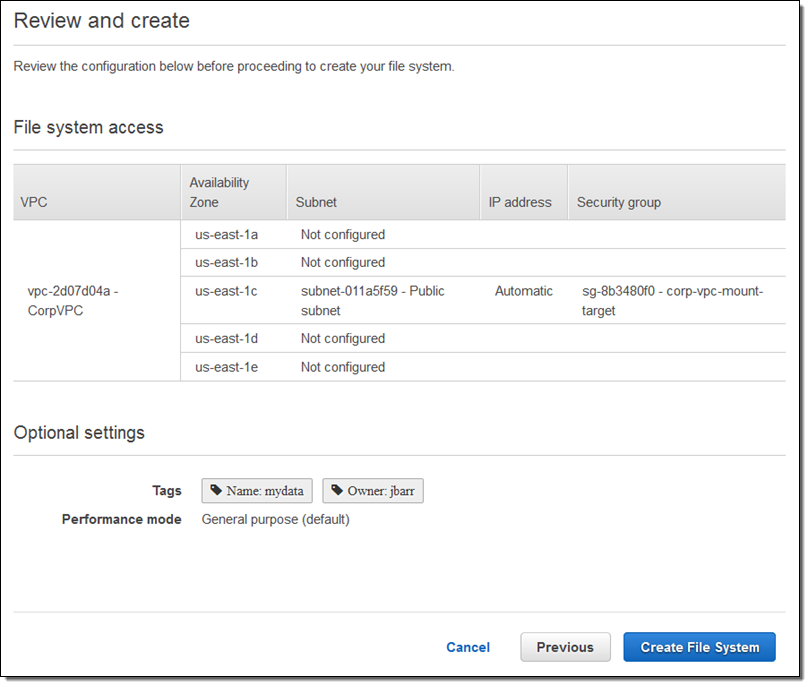 My file system was ready right away (the mount targets took another minute or so): 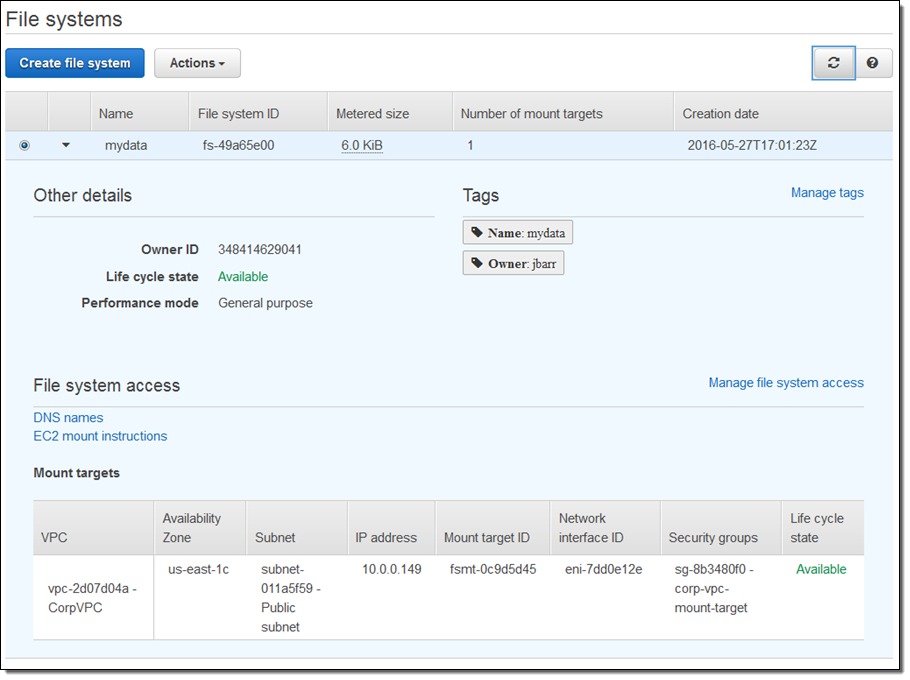 I clicked on EC2 mount instructions to learn how to mount my file system on an EC2 instance: 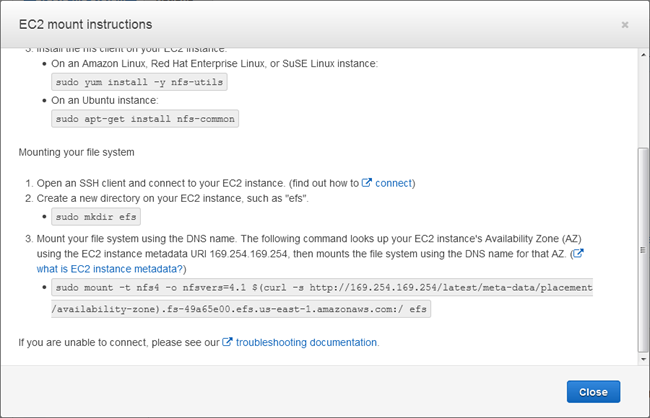 I mounted my file system as /efs, and there it was:

I copied a bunch of files over, and spent some time watching the NFS stats: 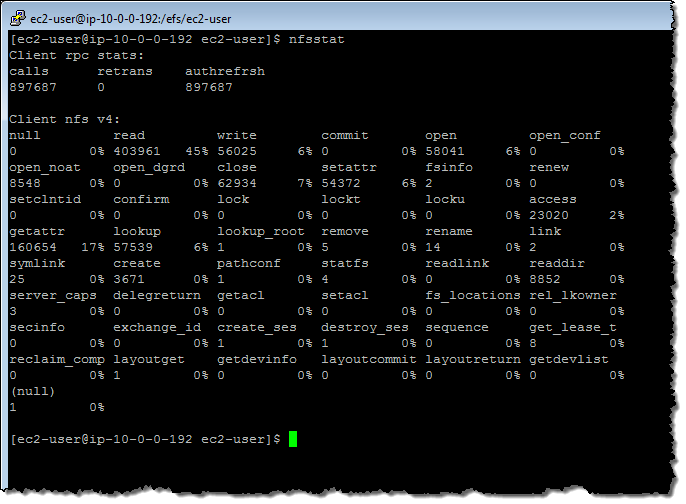 The console reports on the amount of space consumed by my file systems (this information is collected every hour and is displayed 2-3 hours after it is collected): 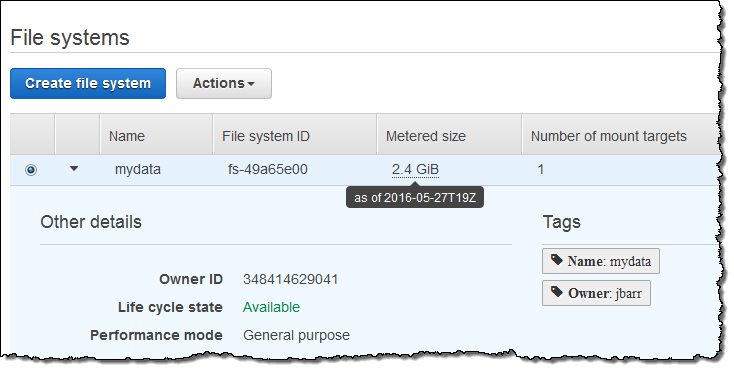 You can see the metrics in the CloudWatch Console: 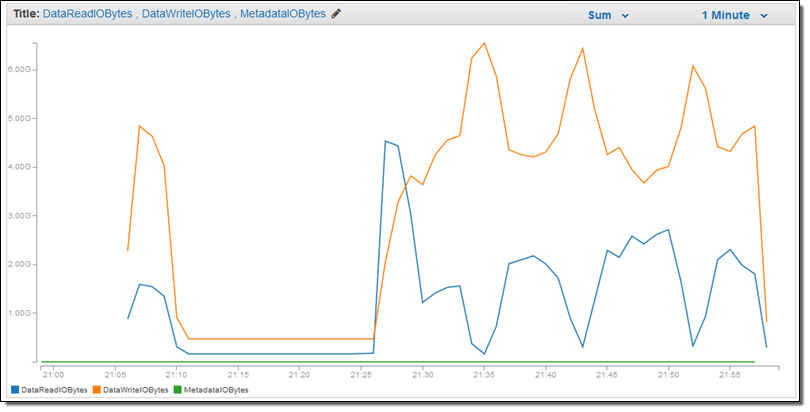 EFS Bursting, Workloads, and Performance
The throughput available to each of your EFS file systems will grow as the file system grows. Because file-based workloads are generally spiky, with demands for high levels of throughput for short amounts of time and low levels the rest of the time, EFS is designed to burst to high throughput levels on an as-needed basis.

Here are some examples to give you a better idea of what this means in practice:

To learn more about how the credit system works, read about File System Performance in the EFS documentation.

In order to gain a better understanding of this feature, I spent a couple of days copying and concatenating files, ultimately ending up using well over 2 TB of space on my file system. I watched the PermittedThroughput metric grow in concert with my usage as soon as my file collection exceeed 1 TB. Here’s what I saw:

As is the case with any file system, the throughput you’ll see is dependent on the characteristics of your workload. The average I/O size, the number of simultaneous connections to EFS, the file access pattern (random or sequential), the request model (synchronous or asynchronous), the NFS client configuration, and the performance characteristics of the EC2 instances running the NFS clients each have an effect (positive or negative). Briefly:

Benchmarking of file systems is a blend of art and science. Make sure that you use mature, reputable tools, run them more than once, and make sure that you examine your results in light of the considerations listed above. You can also find some detailed data regarding expected performance on the Amazon Elastic File System (Amazon EFS) page.

Available Now
EFS is available now in the US East (N. Virginia), US West (Oregon), and Europe (Ireland) Regions and you can start using it today.  Pricing is based on the amount of data that you store, sampled several times per day and charged by the Gigabyte-month, pro-rated as usual, starting at $0.30 per GB per month in the US East (N. Virginia) Region. There are no minimum fees and no setup costs (see the EFS Pricing page for more information). If you are eligible for the AWS Free Tier, you can use up to 5 GB of EFS storage per month at no charge.