It is common to meet enterprises still using mainframes because that is historically where their core business applications have been. With Heirloom on AWS, we can decouple the application from the physical mainframe hardware, allowing us to run applications in the cloud and take advantage of the benefits of Amazon Web Services (AWS).

Heirloom is deployed on AWS Elastic Beanstalk, which facilitates elasticity (the ability to automatically scale-out and scale-back), high availability (always accessible from anywhere at any time), and pay-as-you-go (right-sized capacity for efficient resource utilization). With Heirloom on AWS, mainframe applications that were rigid and scaled vertically can be quickly and easily transformed (recompiled) so they are now agile and scaled horizontally.

Heirloom Computing is an AWS Partner Network (APN) Standard Technology Partner. In this post, we use a real-world example to outline how monolithic mainframe applications can automatically be refactored to agile cloud-native applications on AWS.

At the core of Heirloom is a unique compiler that quickly and accurately recompiles online and Batch mainframe applications (COBOL, PL/I, JCL, etc.) into Java so they can be deployed to any industry standard Java application server, such as Apache Tomcat, Eclipse Jetty, or IBM WebSphere Liberty.

With Heirloom, once the application is deployed it retains both the original application source code and resulting refactored Java source code. Heirloom includes Eclipse IDE plugins for COBOL, PL/I, and Java, as well as a fully functional integrated JES console and subsystem for running JCL jobs. This enables a blended model for ongoing development and management of the application so you can bridge the skills gap at a pace that is optimal for you, and switch code maintenance from COBOL to Java at your convenience. 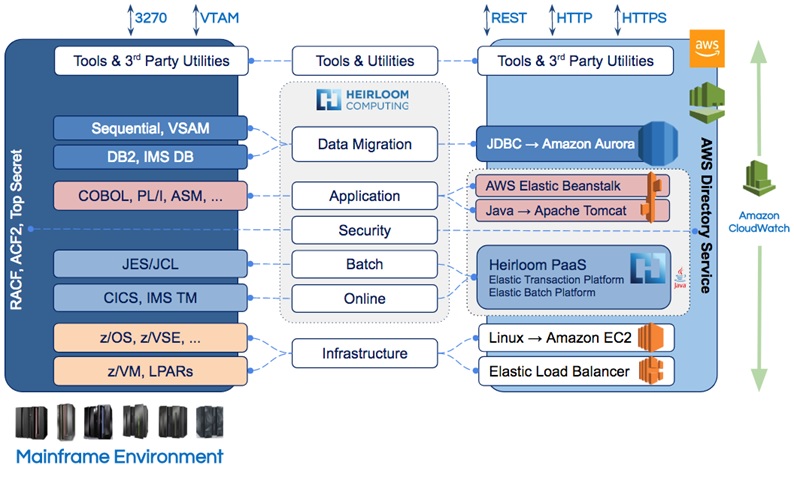 Heirloom deploys applications to industry standard Java application servers, which means your application can instantly leverage the full capabilities of AWS. Applications can dynamically scale-out and scale-back for optimal use of compute resources, and seamlessly integrate with additional AWS managed services like AWS Lambda and Java application frameworks like Angular2.

Here’s an example that uses Amazon Alexa to interact with unmodified CICS transactions deployed as microservices, and here’s another example that utilizes Docker containers. 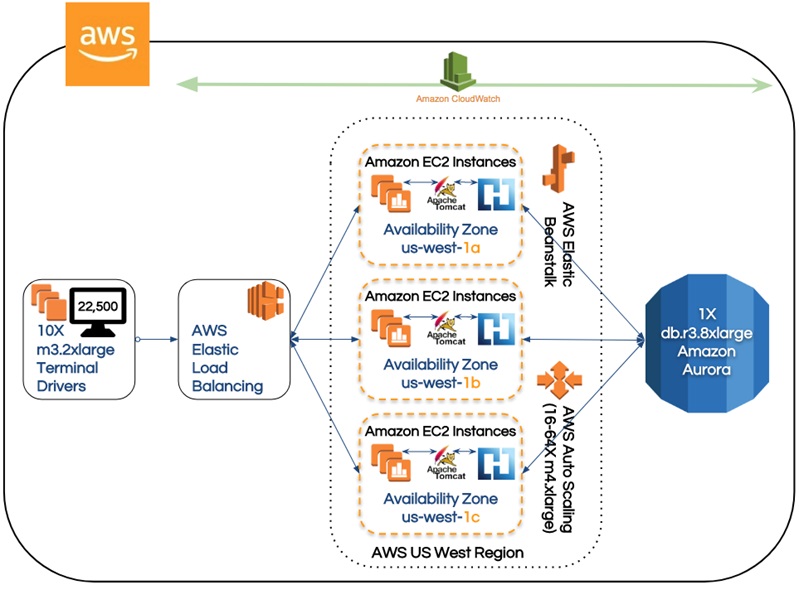 The Heirloom elastic architecture relies on stateless share-nothing application servers that scale horizontally across Availability Zones (AZs). Any shared or persistent data structure is stored in an elastic managed data store. On AWS, this horizontal architecture across several AZs and many instances is key for elasticity, scalability, availability, and cost optimization. AWS Elastic Beanstalk automatically handles the application deployment, from capacity provisioning, load balancing, and auto-scaling to application health monitoring.

Application artifacts that are not inherently scalable are refactored to a target that automatically removes that constraint. For example, file-based data stores such as VSAM files are migrated to a relational data store using Heirloom built-in data abstraction layers. This is achieved without requiring any changes to the application code.

For the performance test on AWS, we took more than 50,000 lines of the TPC-C application code and screens and compiled them (without any modifications) into 100 percent Java using the Heirloom Software Developer Kit (SDK) Eclipse plugin. The Java code was then packaged as a standard .war file, ready for deployment to any industry standard Java application server (such as Apache Tomcat).

The TPC-C environment on AWS is composed of:

The application workload at peak was distributed over a total of 144 CPU cores (each CPU is equivalent to 2 vCPUs), consisting of 128 CPU cores for the application layer and 16 CPU cores for the Aurora database layer. For a 15,200 MIPS capacity, this yields approximately 105 MIPS per CPU core (or 52 MIPS per vCPU). This is consistent with our client engagements, and a useful rule of thumb when looking at initial capacity planning.

For a large mainframe of more than 11,000 MIPS, the average annual cost per installed MIPS is about $1,600. Hardware and software accounts for 65 percent of this, or approximately $1,040. Consequently, we determined the annual infrastructure cost for a 15,200 MIPS mainframe is approximately $16 million.

On the AWS side, using the AWS Simple Monthly Calculator to configure a similar infrastructure to the performance test, we estimated the annual cost to be around $350,000 ($29,000 monthly). This AWS cost could be further optimized with Amazon EC2 Reserved Instances.

The annual cost for Heirloom varies depending on the size of the application being refactored (it consists of a cost per CPU core with larger discounts for larger application workloads). With all costs accounted for, our clients typically see a cost reduction in excess of 90 percent, and positive ROI within a year.

With any solution that takes you from one ecosystem to another, not only is it essential the application behaves and functions as it did before, it’s vital that any application code produced is of the highest quality. 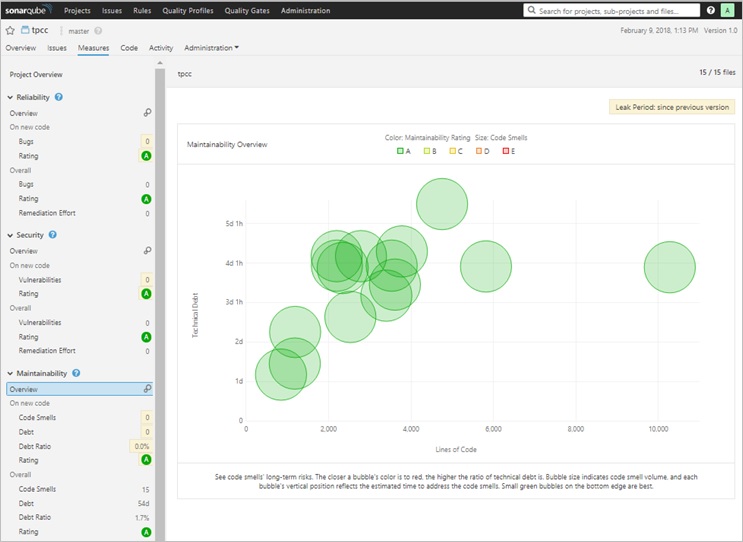 The Heirloom SDK is a plugin for the Eclipse IDE framework and provides tooling that covers all aspects of a refactoring project, as outlined in Figure 1.

The same tooling is then used for ongoing application development and maintenance. This can be done in COBOL, PL/I, Java or any mix. Each language is fully supported with a feature-rich project workspace, editor, compiler, and debugger.

Regardless of which language you choose, Heirloom applications always execute on the Java platform. 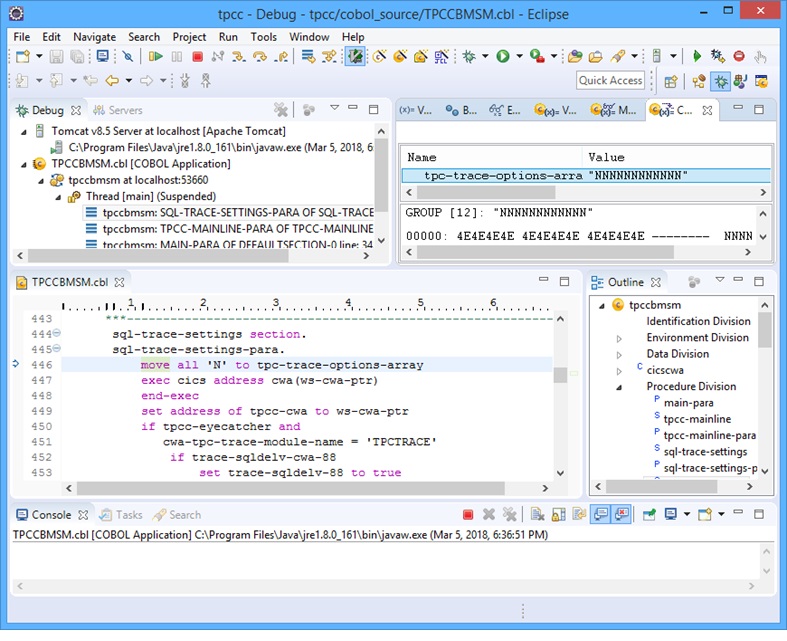 Not Just Cloud, But Cloud-Native

You can move an application to the cloud by re-hosting it (also called “lift and shift”) on an Amazon EC2 instance, retaining the existing constraints of the legacy workload such as stateful applications, monolithic application structure, file-based data stores, and vertical scaling. It works with limitations, but it is not cloud-native.

In simple terms, cloud-native is an approach to the development and deployment of applications that fully exploits the benefits of the cloud-computing platform. There are best practices for cloud-native applications, such as:

Cloud-native applications are elastic, highly-scalable, and embrace the elasticity of underlying AWS services. With horizontal scalability, cloud-native applications are also more cost optimized because you don’t need to size a fixed number of instances for peak traffic. Instead, you can use smaller instances which are instantiated or terminated automatically based on the exact workload demand.

The major benefit of Heirloom on AWS is that it can automatically refactor mainframe applications to Java application servers so they are cloud-native, while preserving critical business logic, user-interfaces, data integrity, and systems security.

Learn More About Heirloom on AWS

See Heirloom in action with our 60-second demo. You can also try it by downloading Heirloom SDK for free—available on Windows, Linux, and macOS.
You can read an in-depth look at how the performance benchmark on AWS was performed in my LinkedIn article.