Along a customer’s digital transformation journey to the Amazon Web Services (AWS) Cloud, server migration is one of the most common application migration cases.

Imagine a web shop that runs on two web servers, two application servers, and one database server. It’s clear that when you migrate the web shop application to AWS, you need to migrate these five servers.

One key to migration success is mobility tooling for migration automation and process consistency, which is particularly critical when a customer has a large number of applications running on hundreds or thousands of servers.

In this post, we will describe common characteristics of server mobility technology and look at PlateSpin Migrate, a server portability solution built by Micro Focus, an AWS Partner Network (APN) Advanced Technology Partner with the AWS Data & Analytics Competency.

We will also provide a case study to show how server mobility tools like PlateSpin Migrate can help customers accelerate mass workload migration to AWS.

PlateSpin Migrate is a powerful server portability solution that automates the process of migrating physical server machines or virtual host servers over the network to enterprise cloud platforms like AWS—all from a single point of control.

When migrating such servers, PlateSpin Migrate re­fers to these servers as “workloads.” A workload in this context is the aggregation of the software stack installed on the server: the operating system, applications, and middleware, plus any data that resides on the server volumes.

PlateSpin Migrate provides you with a mature and proven solution for migrating, testing, and rebalancing workloads across infrastructure boundaries.

Here, we start by listing several common characteristics to help readers better understand server migration tools, and help guide in selecting the right migration tool according to specific application migration requirements. In addition, we call out how PlateSpin Migrate implements the functionality.

Migration tools are of two different types with respect to where they orchestrate workload migration. Software-as-a-service (SaaS) tools are typically hosted in the cloud, while a server-based migration service runs either in the source or target migration environment. The former is a multi-tenant service managed by the tool vendor, whereas the latter is managed by tool users. PlateSpin Migrate is server-based.

As part of server migration, customers may choose to “bring your own license” (BYOL) to AWS, or may want to leverage AWS-managed licenses. Thus, server mobility technology may provide some form of OS license migration schemes. PlateSpin Migrate supports both BYOL and AWS-managed licenses.

Prior to server migration, users may plan and set up a landing environment with an Amazon Virtual Private Cloud (Amazon VPC), subnets, Network ACLs, and Security Groups for target virtual machines (VMs). Server mobility technology has the capability of enabling users to browse and select a target landing environment. PlateSpin Migrate possesses this capability.

Migration data in transit and in the target environment should be protected. Mobility tools protect data in transit through native data encryption/decryption functions, or via secured transport such as a virtual private network (VPN). PlateSpin Migrate provides native encryption with 128-bit Advanced Encryption Standard (AES).

From the customer’s perspective, a unit of migration is an application that is implemented by a set of servers. Mobility tools help users to group and migrate servers that implement one application. PlateSpin Migrate provides workload tagging functionality for application grouping.

Mode of Operation: Agent-Based or Agent-Less

During server migration, data is replicated from the source server to the target server at storage block level or application file level. Customers should select a server mobility tool that supports either or both of the replication methods based on their migration needs. PlateSpin Migrate supports both. Block-based replications are faster, but file-based replications allow additional configuration options (e.g. volume resizing).

PlateSpin Migrate provides flexible and sandboxed testing capabilities. When using PlateSpin Migrate, there is no limit on the amount of testing or on how long a test can run, prior to cutover.

Migration tools should be cost-conscious with respect to their resource consumption. PlateSpin Migrate only boots the target workload in the cloud during replication and test cutover phases. This provides cost optimization with respect to resource consumption, compared to other solutions that require the target workload to be running during the whole migration process.

Available as a separate product, PlateSpin Transformation Manager can be used in tandem with PlateSpin Migrate to streamline the execution of very large migration projects. 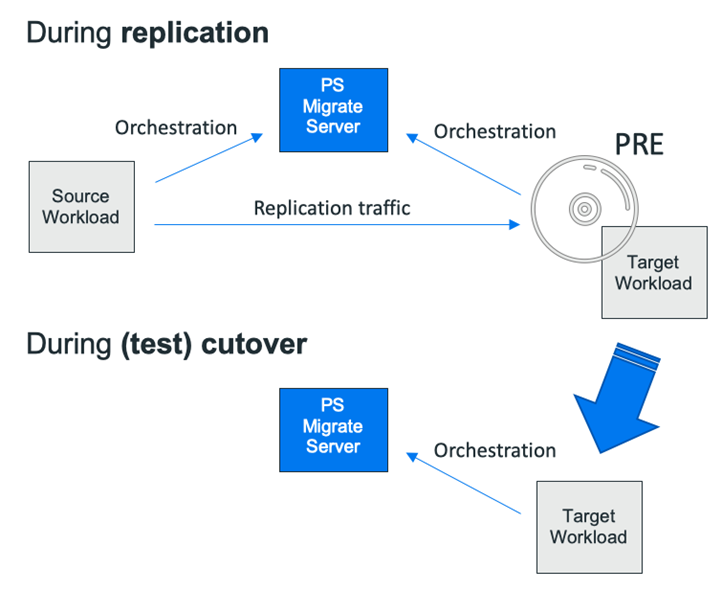 During the discovery phase, PlateSpin Migrate has the following port requirements:

For the replication phase, the following port requirements must be fulfilled: 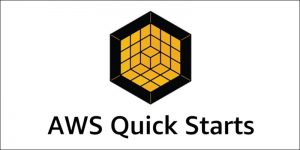 To enable users to quickly and easily get started with migrating workloads to the AWS Cloud, Micro Focus together with AWS created the PlateSpin Migrate Quick Start.

AWS Quick Starts are built by AWS solutions architects and APN Partners to help customers deploy popular technologies on AWS, based on AWS best practices for security and high availability.

These accelerators reduce hundreds of manual procedures into just a few steps, so you can build your production environment quickly and start using it immediately.

Each Quick Start includes AWS CloudFormation templates that automate the deployment and a guide that discusses the architecture and provides step-by-step deployment instructions.

You can find the PlateSpin Migrate Quick Start under the Migration use case on the AWS Quick Start home page. You can deploy it into a new VPC or existing VPC, and the latter option assumes you have an existing (pre-created) VPC with existing subnets. We’ll use this option to illustrate this post.

Figure 3 below depicts the infrastructure deployed once the launched Quick Start has successfully completed. The example shown is for the use-case where there is no site-site VPN connection, with the PlateSpin Migrate server deployed into a public-facing subnet and assigned an AWS Elastic IP address.

Initially, only the PlateSpin Migrate server is deployed as it is responsible for managing the target workload instances. 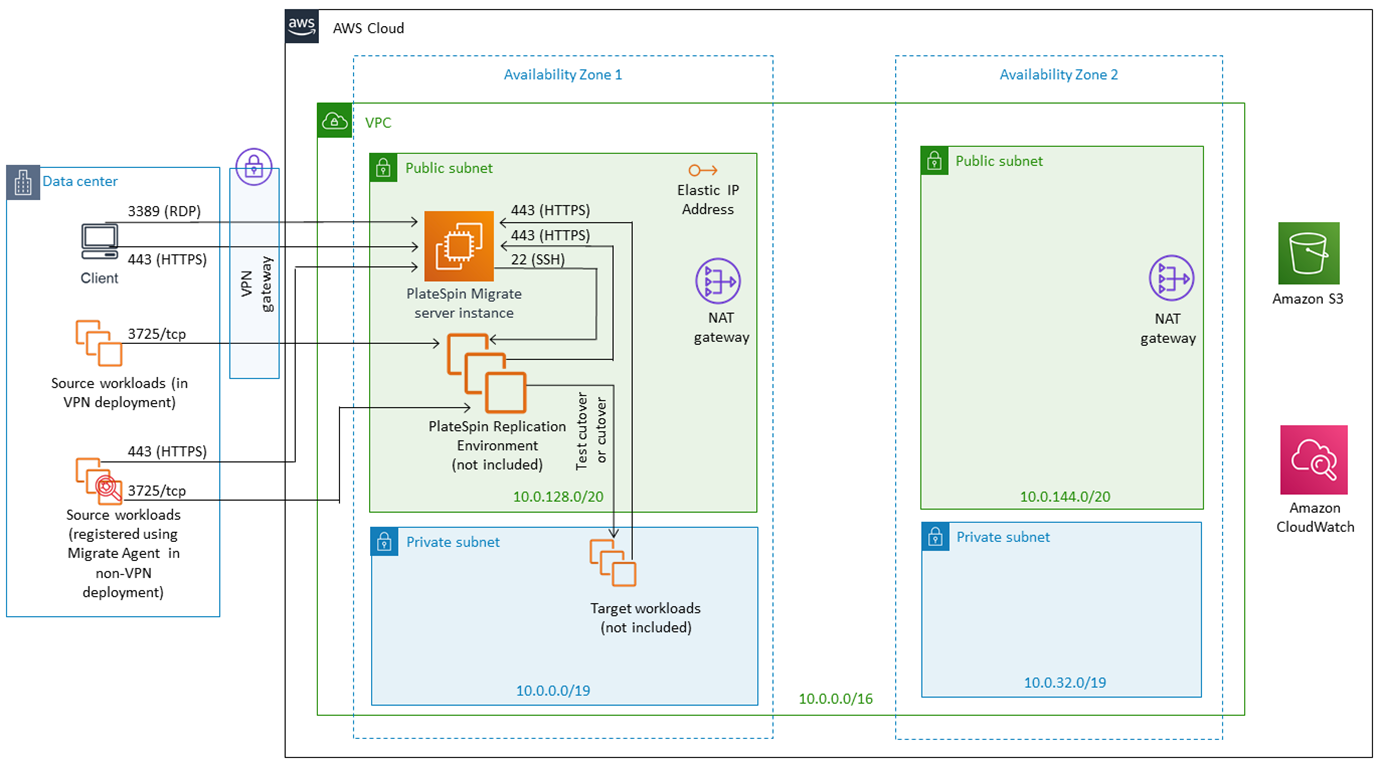 The PlateSpin Migrate Quick Start includes a comprehensive reference guide which covers the deployed architecture as well as step-by-step deployment instructions and best practices for using PlateSpin Migrate on AWS.

When configuring the Quick Start, you’ll have to answer a couple of easy questions: What VPC do you want to deploy the server into? What subnet? What key pair do you want to link to your server? What user name and password do you want to use for the PlateSpin Migrate server admin account?

While we’ve provided sensible default values where appropriate, some of the other configuration options are more advanced and deserve some more explanation:

Figure 4 – After about 15 minutes you have a fully provisioned PlateSpin Migrate server.

With just a couple more clicks you can kick off the Quick Start, and after about 15 minutes you’ll have a fully provisioned PlateSpin Migrate server that is ready for use.

You can retrieve its public IP address via the instances overview of the region where it’s deployed. Once you know the public IP address, simply open a browser connection to your new server like this:

Note that while the port requirements are the same, PlateSpin supports migrations with and without a VPN connection, and that provisioning the PlateSpin Migrate server with the Quick Start automatically configures Security Groups with the correct ports opened in both scenarios.

When you plan to have a site-site VPN connection, as depicted in Figure 5, either over the internet or with AWS Direct Connect, setting the Quick Start parameter “Assign persistent public IP address” to false will result in the PlateSpin Migrate server being deployed in a private subnet with no public-facing Elastic IP address assigned.

You would use this same configuration without a VPN if you were migrating workloads from one Amazon VPC to another. 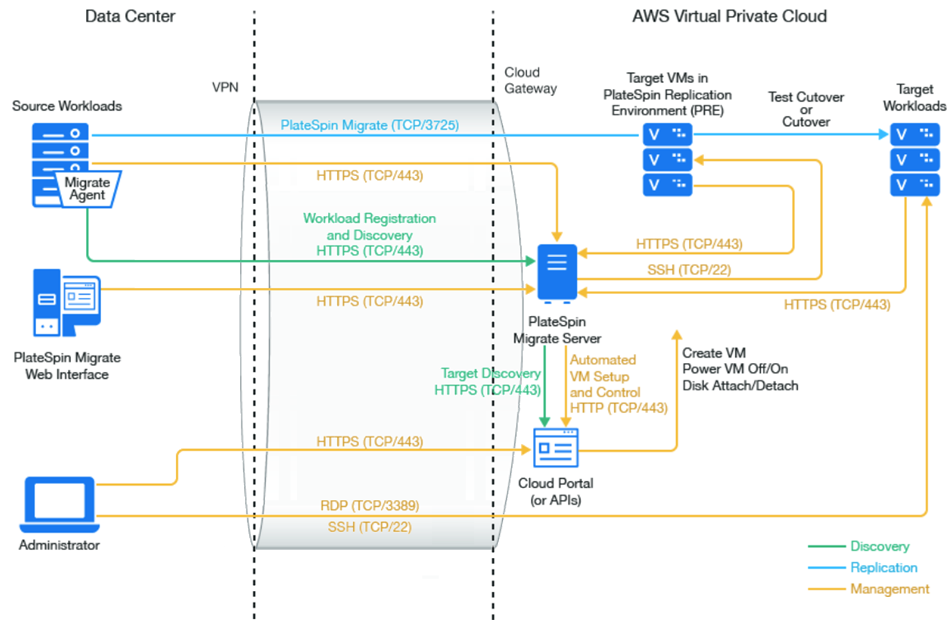 Figure 5 – Automated migration to AWS over a VPN.

When you don’t have a site-site VPN connection, PlateSpin supports connectivity directly over the internet, as depicted in Figure 6. 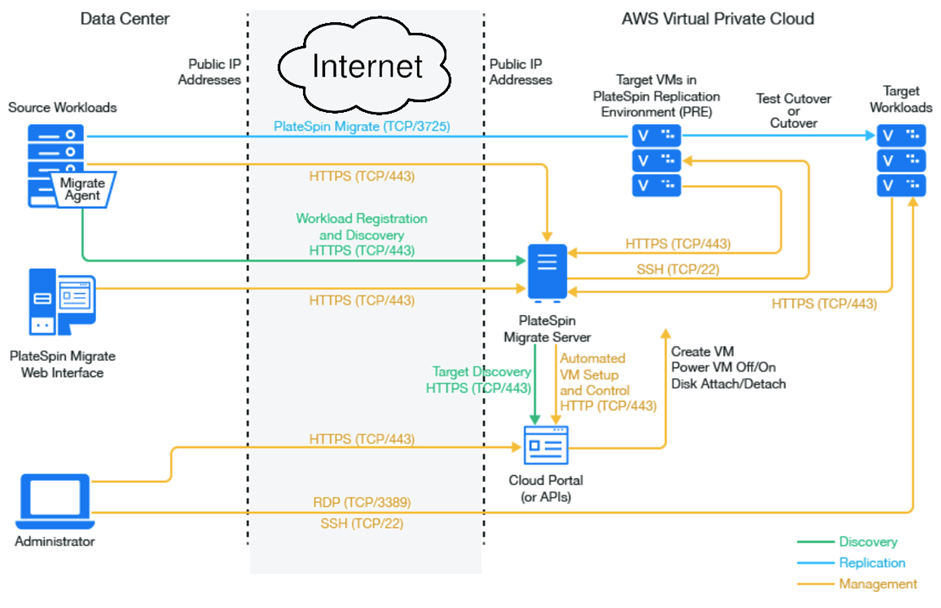 Figure 6 – Automated migration to AWS over the internet.

After provisioning your PlateSpin Migrate server with the AWS Quick Start, the next step is to license your server with an activation code. You can generate a trial activation code using the Free Trial button on the PlateSpin Migrate product website, which you then apply to your server in combination with the email address of your MicroFocus.com account.

A trial activation code will allow you to run five replications, which you can use to migrate as many as three workloads over 30 days.

Once your server is licensed, running a migration is easy. Figure 8 depicts the overall migration workflow.

During the working day, a test cutover can be started at any point in time. With PlateSpin Migrate, there is no limit to how often or how long you can test. When the test is ended, PlateSpin automatically cleans up any testing resources that were provisioned, and will resume the nightly incremental replications until the day when the final cutover is initiated by the user.

Once source workloads are registered and at least one target AWS Region is added, you can start your migration configurations. Select a first source workload to be configured, and click Configure Migration.

Configure your migration as desired using the various configuration options that PlateSpin Migrate offers (enabling automated nightly incremental replications is recommended), and then click Save & Prepare at the bottom of the migration configuration screen.

On the next screen, click Execute to kick off the migration preparation process. When the preparation is done, click Run Migration and then Execute to start the first full replication.

Figure 10 – When you have configured your migration, click Save & Prepare.

When the first full replication is completed, the workload will be in the “Replicated” state, and the buttons at the bottom of the screen will indicate the rest of the workflow.

By clicking the button Test Cutover, a test pass can be performed. PlateSpin Migrate will spin up the target workload in the cloud so that business and application teams can verify the application. When all testing is satisfactory, the workload can be cut over in production via the button Run Cutover. 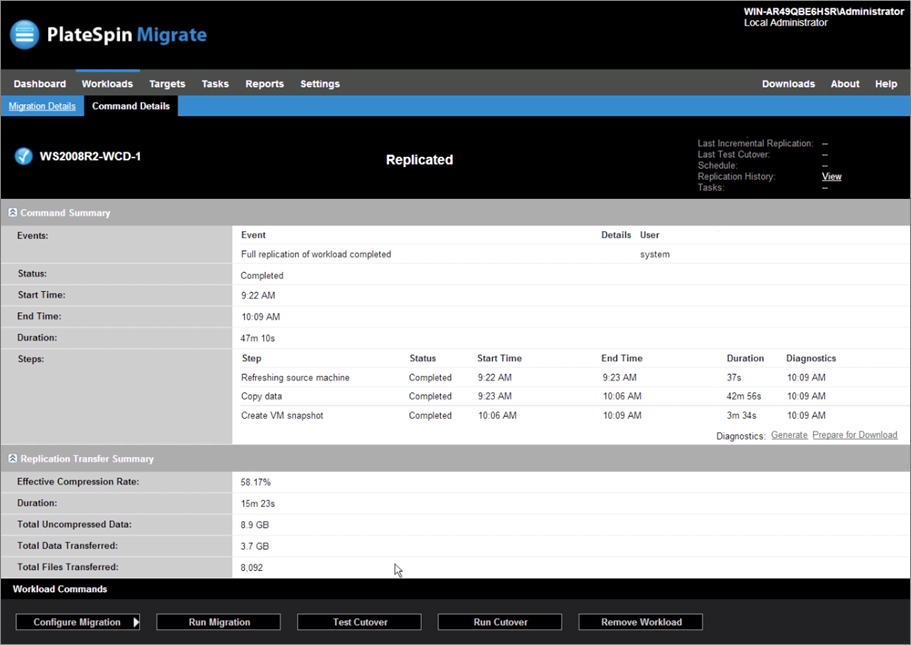 Figure 11 – The buttons at the bottom of the screen indicate the workflow.

Like many enterprises, their client was interested in a cloud environment to reduce operational costs, create a higher availability platform, improve security, and centralize IT management.

After a thorough analysis of the existing environment and the available options, Atos recommended an AWS cloud approach.

Built by Micro Focus, PlateSpin Migrate is a proven and powerful server portability solution that automates the process of migrating physical server machines or virtual host servers over the network to enterprise cloud platforms like AWS.

The new PlateSpin Migrate on AWS Quick Start allows you to provision a cloud-based PlateSpin Migrate server with just a couple of clicks and automatically deploy all the resources that are required for your AWS migrations to run successfully.

The PlateSpin “lift-and-shift” approach migrates applications by migrating the servers that applications run on. When using the AWS Quick Start, you can start migrating servers to AWS within minutes.

Micro Focus is an APN Advanced Technology Partner. They enable customers to utilize new technology solutions while maximizing the value of their investments in critical IT infrastructure and business applications.