Most cattle are not raised in cities—they live on cattle stations, large open plains, and tracts of land largely unpopulated by humans. It’s hard to keep connected with the herd. Cattle don’t often carry their own mobile phones, and they don’t pay a mobile phone bill. Naturally, the areas in which cattle live, often do not have cellular connectivity or reception. But they now have one way to stay connected: a world-first satellite ear tag.

Ceres Tag co-founders Melita Smith and David Smith recognized the problem given their own farming background. David explained that they needed to know simple things to begin with, such as:

Later, the questions advanced to:

To answer these questions, Ceres Tag first had to solve the biggest challenge, and it was not to get cattle to carry their mobile phones and pay mobile phone bills to generate the revenue needed to get greater coverage. David and Melita knew they needed help developing a new method of tracking, but in a way that aligned with current livestock practices. Their idea of a satellite connected ear tag came to life through close partnership and collaboration with CSIRO, Australia’s national science agency. They brought expertise to the problem, and rallied together teams of experts across public and private partnerships, never accepting “that’s not been done before” as a reason to curtail their innovation. 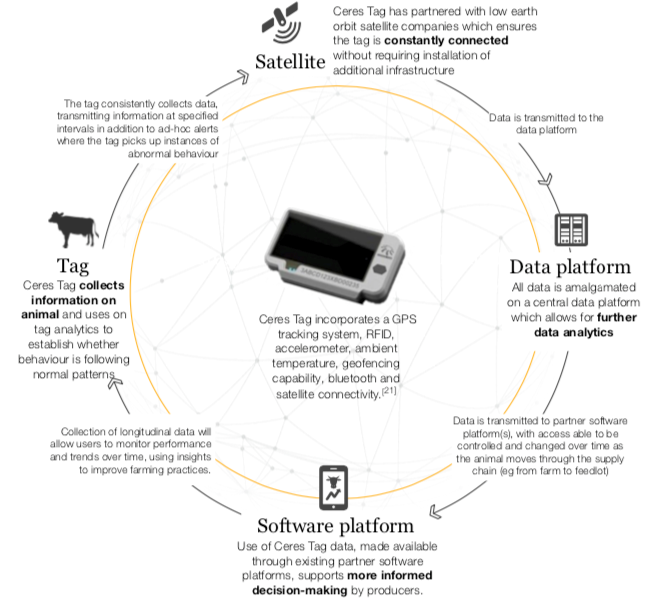 Melita and David constructed their idea and brought the physical hardware to reality. This meant finding strategic partners to build hardware, connectivity partners that provided global coverage at a cost that was tenable to cattle operators, integrations with existing herd management platforms and a global infrastructure backbone that allowed their solution to scale. They showed resilience, tenacity and persistence that are often traits attributed to startup founders and lifelong agricultural advocates. Explaining the purpose of the product often requires some unique approaches to defining the value proposition while fundamentally breaking down existing ways of thinking about things. As David explained, “We have an internal saying, ‘As per Ceres Tag protocol …..’ to help people to see the problem through a new lens.” This persistence led to the creation of an easy to use ear tagging applicator and a two-prong smart ear tag. The ear tag connects via satellite for data transmission, providing connectivity to more than 120 countries in the world and 80% of the earth’s surface.

With the hardware and connectivity challenges solved, Ceres Tag turned to how the data driven insights would be delivered. The company needed to select a technology partner that understood their global customer base, and what it means to deliver a low latency solution for web, mobile and API-driven solutions. David, once again knew the power in leveraging the team around him to find the best solution. The evaluation of cloud providers was led by Lewis Frost, COO, and Heidi Perrett, Data Platform Manager. Ceres Tag ultimately chose to partner with AWS and use the AWS Cloud as the backbone for the Ceres Tag Management System. 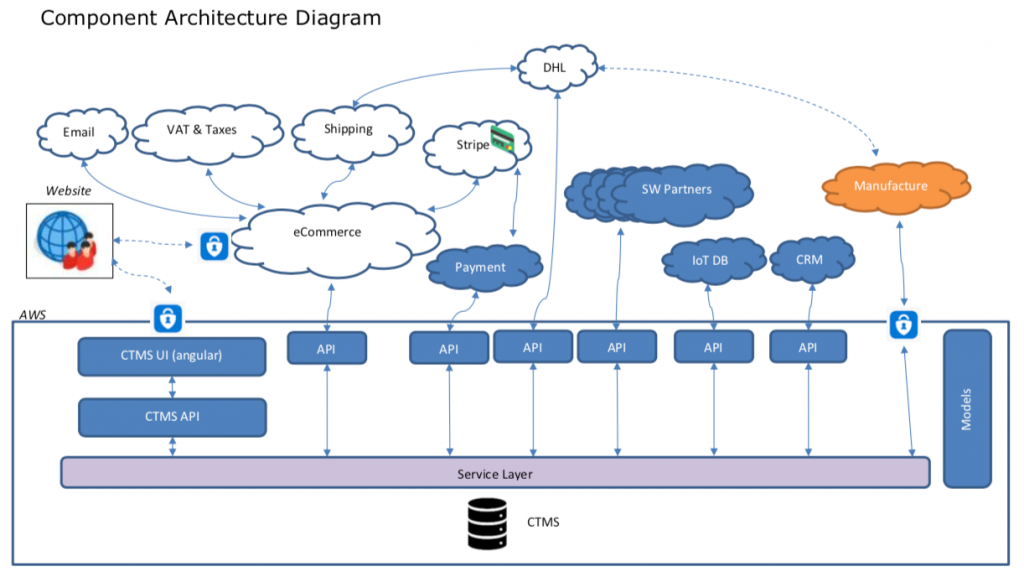 The Ceres Tag Management System houses the data and metadata about each tag, enabling the traceability of that tag throughout each animal’s life cycle. This includes verification as to whom should have access to their health records and history. Based on the nature of the data being stored and transmitted, security of the application is critical. As a startup, it was important for Ceres Tag to keep costs low, but to also to be able to scale based on growth and usage as it expands globally.

Ceres Tag is able to quickly respond to customers regardless of geography, routing traffic to the appropriate end point. They accomplish this by leveraging Amazon CloudFront as the Content Delivery Network (CDN) for traffic distribution of front-end requests and Amazon Route 53 for DNS routing. A multi-Availability Zone deployment and AWS Application Load Balancer distribute incoming traffic across multiple targets, increasing the availability of your application.

Ceres Tag is using AWS Fargate to provide a serverless compute environment that matches the pay-as-you-go usage-based model. AWS also provides many advanced security features and architecture guidance that has helped to implement and evaluate best practice security posture across all of the environments. Authentication is handled by Amazon Cognito, which allows Ceres Tag to scale easily by supporting millions of users. It leverages easy-to-use features like sign-in with social identity providers, such as Facebook, Google, and Amazon, and enterprise identity providers via SAML 2.0.

The data captured from the ear tag on the cattle will be ingested via AWS PrivateLink. By providing a private endpoint to access your services, AWS PrivateLink ensures your traffic is not exposed to the public internet. It also makes it easy to connect services across different accounts and VPCs to significantly simplify your network architecture. In leveraging a satellite connectivity provider running on AWS, Ceres Tag will benefit from the AWS Ground Station infrastructure leveraged by the provider in addition to the streaming IoT database. 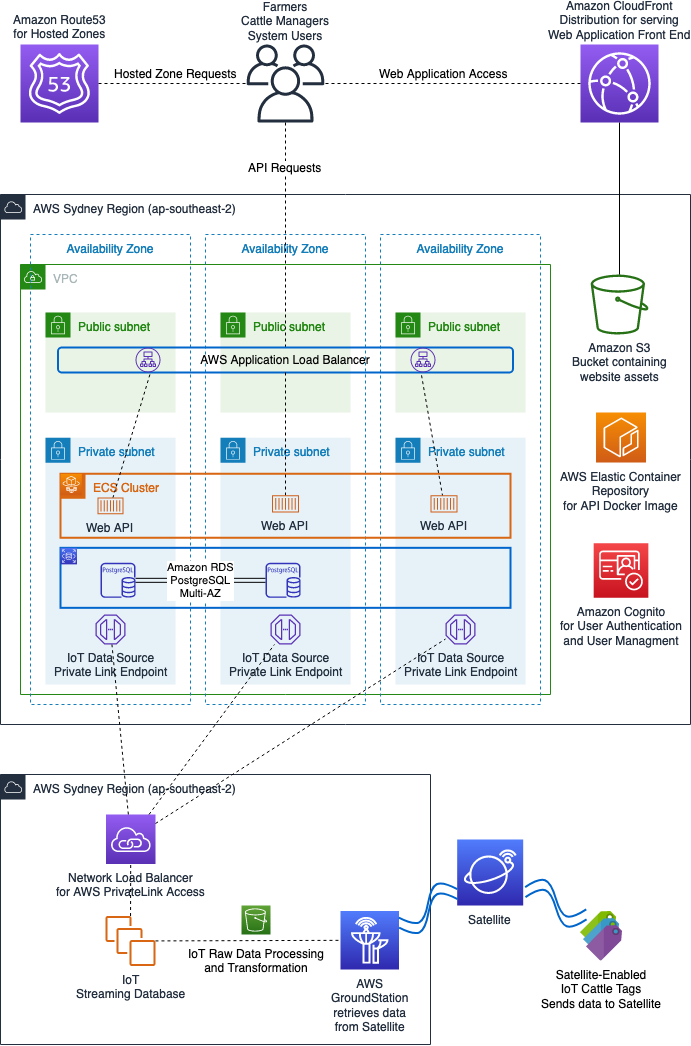 The Ceres Tag team was quick to point out that the impact of the tag is in making data available that were previously not accessible. Global meat consumption increased by 64% from 1999 to 2019. In Australia alone, the total herd size is 23.8M, and more than with over 70% are exported. Traceability of origin, ownership, and animal history can lead to a 25% price premium, particularly in high-value beef export markets including Korea and Japan. Although, this premium is significant, the health of the animals throughout their lives motivates adopters and has caught the notice of research institutions.

“To be able to quickly detect an emergency disease, like foot and mouth outbreak, because of symptoms that are occurring in animals and herds, we’d actually be able to be alerted to and then respond to that almost in real-time, which we can’t do with the existing NLIS.” –  Dr. Mark Trotter from CQ University

Early on during the prototyping and development, Ceres Tag recognized that the use cases were broad, spanning far beyond traceability and animal health, to mitigating risk both financially and from theft. In the long term, they see the potential for carbon management to be a key market. As David summarized,  “The beautiful thing we realized about Ceres Tag, as it was developed, was that people started to come to us with scenarios around how they would be using the platform.”

The Ceres Tag team brought their idea to life through partnerships with CSIRO and by leveraging the AWS Activate program for startups. The company worked with the AWS Agriculture Industry vertical team that specializes in the Agriculture industry alongside the in-market startup, commercial and IoT teams to help solve their unique architectural challenges. To learn more about the Agriculture industry at AWS, please reach out to agteam@amazon.com.

To learn more about how Ceres Tag is creating the world’s first satellite connected ear tag and leveraging AWS for global scale watch, the live Twitch episode of All in the Field: AWS in Agriculture on November 12, 2020 at 12 PM PST.