I recently worked with a customer who needed to process a bunch of raw sequence files (FastQs) into Hi-C format (*.hic), which is used for the structural analysis of DNA/chromatin loops and sequence accessibility. The tooling they were interested in using was the Juicer suite and they needed a minimal workflow:

Because they had many files to process, they wanted to do this as scalably as possible. The juicer step of the workflow was CPU and memory-intensive, while the HiCCUPS step needed GPU acceleration. So, they were interested in using AWS Step Functions and AWS Batch.

Since its launch, AWS Batch has enabled the ability to create scalable compute environments for processing a mixture of CPU and memory-intensive jobs. This covers the needs of the majority of genomics workflows. So, how do you create a genomics workflow environment using AWS Batch that also includes using GPUs? Thankfully, AWS Batch recently announced support for GPU resources!

In this post, I show you how to use these new features to execute mixed CPU and GPU genomics workflows. By the end of this post, you will be able to build the architecture shown below. 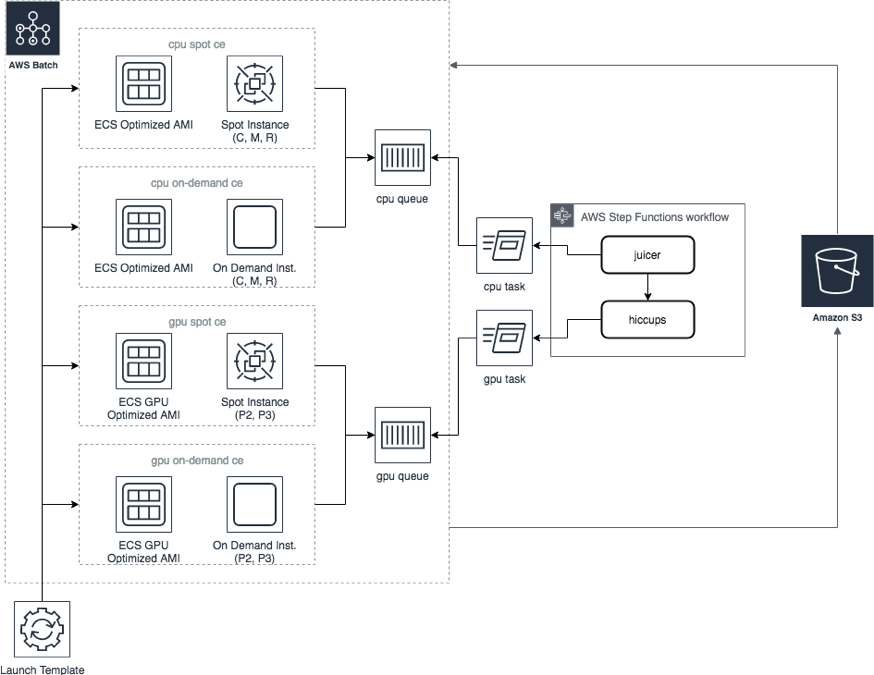 To handle a mixture of CPU and GPU jobs, the recommended strategy is to create multiple compute environments and job queues:

Amazon EC2 has a wide variety of instance types. This includes the P3 family of instances that enable GPU-accelerated computing. Previously, the best option for using GPUs in AWS Batch was to create a compute environment based on the publicly available Deep Learning AMI used by AI/ML services. For example, Amazon SageMaker has support for running containers and NVIDIA / CUDA drivers pre-installed.

The key points are:

This is a much more lightweight solution, and makes creating GPU-specific AWS Batch compute environments much easier.

Creating an AWS Batch compute environment specifically for GPU jobs is similar to creating one for CPU jobs. The key difference is that you select only GPU instance families for the instance types.

For compute environments that use the P2, P3, and P3dn instance families, AWS Batch automatically associates the ECS GPU-optimized AMI. You don’t have to create a custom AMI for GPU jobs to run on these instances.

To create a GPU-enabled compute environment with the AWS CLI, create a file called gpu-ce.json with the following contents:

From the command line, run the following:

When you have a GPU compute environment, you can associate it with a dedicated GPU job queue.

From the command line, run the following:

Creating job definitions in AWS Batch has not changed much. However, now there’s an additional field under Resource requirements that lets you specify how many GPUs the job should use.

The JSON for registering a job definition with GPU requirements looks like the following:

To ensure that your containerized task can use GPU acceleration, use nvidia/cuda base images when building the container image for your job. For example, for a CentOS-based image with CUDA 9.2, your Dockerfile should have the following:

This could be at the top if you are building the container entirely from scratch, or later if you are using a multi-stage build.

In this case, I already had a CentOS-based image for the juicer utility that I could recycle for juicer-tools. So my Dockerfile looked like the following:

With all the AWS Batch resources in place, it is a matter of pointing each task at the job queue with the right compute resources.

The solution I put together for the customer with the Juicer suite resulted in the following state machine:

With the ECS GPU-optimized AMI and AWS Batch support for GPU resources, you can easily build a scalable solution for running genomics workflows with both CPU and GPU resources.