SkyTouch Technology was launched in 2013 as a division of Choice Hotels, one of the largest hotel chains in the world. SkyTouch offers the industry’s first and most widely used cloud-based hotel property management system. Since partnering with AWS in 2018, SkyTouch has grown to become the most widely used Hotel Operating Platform with more than 6,800 property installations.

In this blog post, I will share SkyTouch Technology’s migration of its critical business applications to AWS and the opportunities this migration created for SkyTouch.

SkyTouch’s two primary motivations for moving to AWS are increased business agility and saving on operating cost. The time to delivery of new product features is a critical component of SkyTouch’s business.

The hotel industry is one of the industries hit hardest by the COVID-19 pandemic. According to STR, a hospitality data tracker, the occupancy rate dropped more than 30 percent and the revenue per available room dropped more than 50 percent. SkyTouch was facing at least two big challenges under the pandemic. One was how to save on operating costs and the other was how to improve their operational efficiency and scalability.

SkyTouch’s initial architecture consisted of two monolithic applications, supported by several smaller services. One of their business-critical applications, choiceADVANTAGE®, offers hotel property management capability, full rate, inventory synchronization, and automatically manages reservations
to over 6,800 hotels worldwide. The major databases behind these systems were SQL Server and Informix installations. This architecture severely limited their ability to deliver features rapidly because they could not scale development in a monolithic architecture and infrastructure changes were difficult and time consuming to accomplish in the physical data center.

To overcome these challenges, SkyTouch began a journey to decompose the monolithic applications into a microservices architecture, a project that would be very difficult to accomplish with the limitations of their data center. Instead, migrating to AWS provides a number of key benefits unavailable in their datacenter:

Migrating to AWS also provided a number of cost benefits. Leveraging AWS Auto Scaling capabilities, along with the ability to quickly provision and decommission infrastructure, is a key cost management enabler. SkyTouch’s demand is highly cyclical, both on a daily and seasonal basis. Provisioning infrastructure that can easily scale up during busy summer months and scale down when demand is lower allows SkyTouch to match capacity to demand. This flexibility also significantly reduces the overhead of right-sizing infrastructure resources, eliminating the overhead and long lead times required to purchase and provision new hardware in the data center. Finally, AWS provides more flexibility with licensing for Microsoft Windows Server and SQL Server databases since the license is bundled with the instances and charged only when the instance is running.

The migration to AWS was a major undertaking. Not only did SkyTouch need to minimize the impact of downtime for their customers, they also had to plan for numerous integrations between systems, customers, and third parties. The AWS Migration Acceleration Program (MAP) for Windows helped SkyTouch reach migration goals even faster with best practices, tools, and incentives.

In the first phase of the migration, the team worked through the network architecture, planned connectivity from their physical data center and ensured that the design would meet security and compliance requirements (see Figure 1). In parallel, all of the system integration points were identified and validated.

In the second phase, the team provisioned all the necessary infrastructure in a test environment, restored the databases using backups transferred from the data center to Amazon Simple Storage Service (Amazon S3)  and deployed the applications. Extensive testing was performed to validate functionality and integration points and properly configure and size the infrastructure to handle the production traffic volumes.

Once testing was complete, the SkyTouch team set up the production environment and worked through planning the production cutover. In order to migrate their SQL Server databases, they joined the new production cluster to the existing on-premises availability group. This allowed SkyTouch to synchronize the databases between AWS and their data center, with the benefit of validation prior to cutover and a quick failover path should any major problems occur during the migration. The planning process ensured all of the cutover steps were coordinated in such a way as to minimize downtime, prevent data loss, and validated proper and ordered flow of asynchronous messaging. All the careful planning and testing paid dividends, as SkyTouch was able to fully cut over to the new AWS environment in four hours. 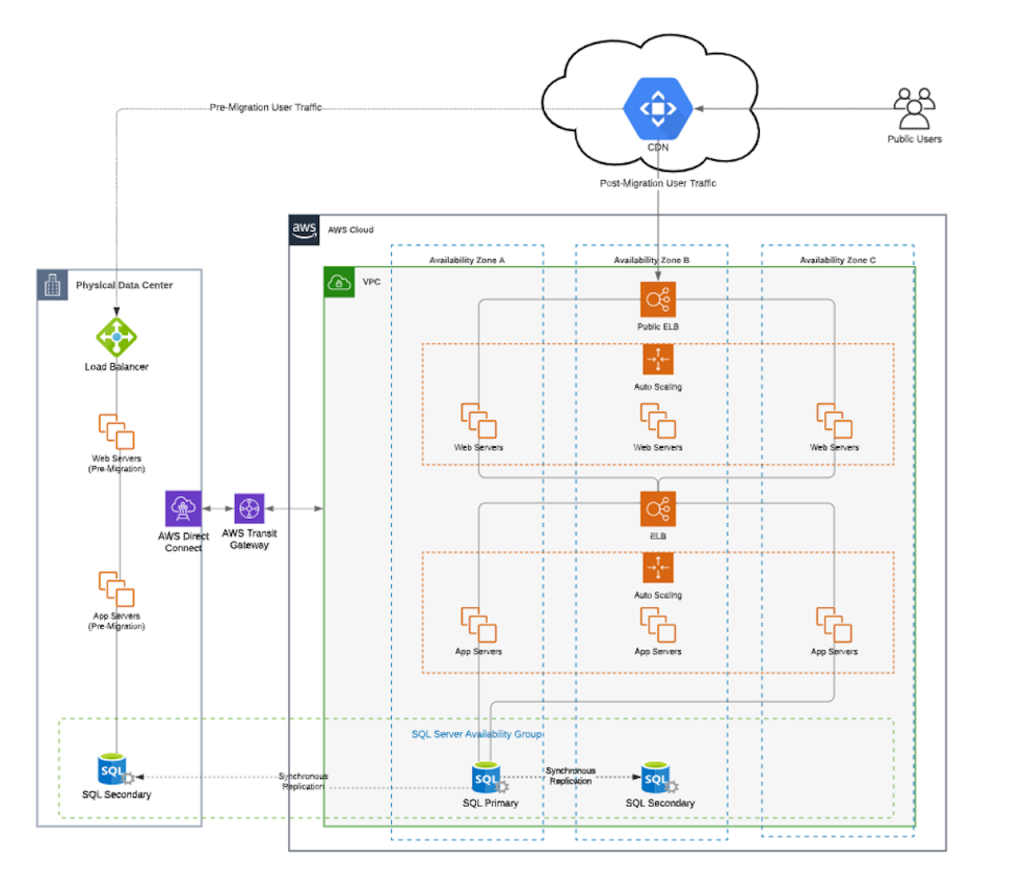 In phase 1, SkyTouch ran into two main challenges. The first challenge was to ensure compliance with PCI, SOX, and overall security requirements, especially around the networking and data flows between AWS and the data center. SkyTouch mitigated this by working closely with their compliance and InfoSec teams during the design phase to continuously refine the network architecture. AWS Transit Gateway became a key solution that allowed SkyTouch to maintain proper network segmentation between their production and non-production AWS accounts and the physical data center.

The other challenge in phase 1 was determining all the application integration points. As a 17-year-old legacy application that is core to SkyTouch’s business, there were numerous integrations with both internal and external systems that had been added over the life of the system. The SkyTouch migration team met with application owners and architecture teams from across the organization to determine which integration points existed and how the integrations worked. The team also walked through source code and configuration files and monitored network traffic to both validate what was learned and identify items that were missed.

With phase 2, SkyTouch was very concerned with mitigating risks to the migration, especially the production cutover. The primary mitigation strategies that SkyTouch used including:

One year after the migration of their hotel property management system to AWS, SkyTouch has realized all the benefits that were expected from the migration.

The key factors that drove these improvements:

What are the next steps for SkyTouch’s AWS cloud journey? Stay tuned…