Businesses need a network that can empower the data center to move workloads to the cloud. In most data centers, the diverse and disjointed visibility, as well as troubleshooting capabilities with no correlation across different environments, results in complex operational models.

There are multiple panes of glass needed to configure, manage, monitor, and operate these instances. More importantly, there are inconsistent segmentation capabilities across hybrid instances posing security, compliance, and governance challenges.

These connectivity options include leveraging either the internet or an AWS Direct Connect connection as the network backbone, and then terminating the connection into either AWS or user-managed network endpoints.

Additionally, with AWS, you can choose how network routing is delivered between Amazon VPC and your networks, leveraging AWS or user-managed network equipment and routes.

Amazon VPC lets you provision a logically isolated section of the AWS Cloud where you can launch AWS resources in a virtual network that you define. Within a VPC, you have control over your virtual networking environment, including selection of your own IP address range, creation of subnets, and configuration of route tables and network gateways.

Furthermore, you can leverage multiple layers of security, including security groups and network access control lists, to enable inbound and outbound filtering. This enables you to control access to Amazon Elastic Compute Cloud (Amazon EC2) instances in each subnet.

The Cisco ACI Cloud APIC is software that runs on AWS and translates the on-premises network policies into AWS networking constructs such as VPCs, security groups and rules, and IPSec VPN tunnels that cloud workloads can run on top of. Thereby, Cisco ACI Cloud APIC provides a single point of policy orchestration, operational consistency, and visibility across hybrid environments.

Cisco Cloud ACI provides a common policy abstraction and consumes AWS public APIs to deliver consistency and segmentation. As such, Cisco Cloud ACI is not confined to bare metal instances on AWS and does not require deployment of agents in cloud workloads to achieve segmentation.

Cisco Cloud ACI also has a strong tech-partner ecosystem and integrates with a variety of solutions ranging from Cisco AppDynamics and CloudCenter to F5, ServiceNow, Splunk, SevOne, and Datadog. Customers can leverage widely-adopted tools such as Terraform and Ansible to achieve end-to-end workflow-based automation. 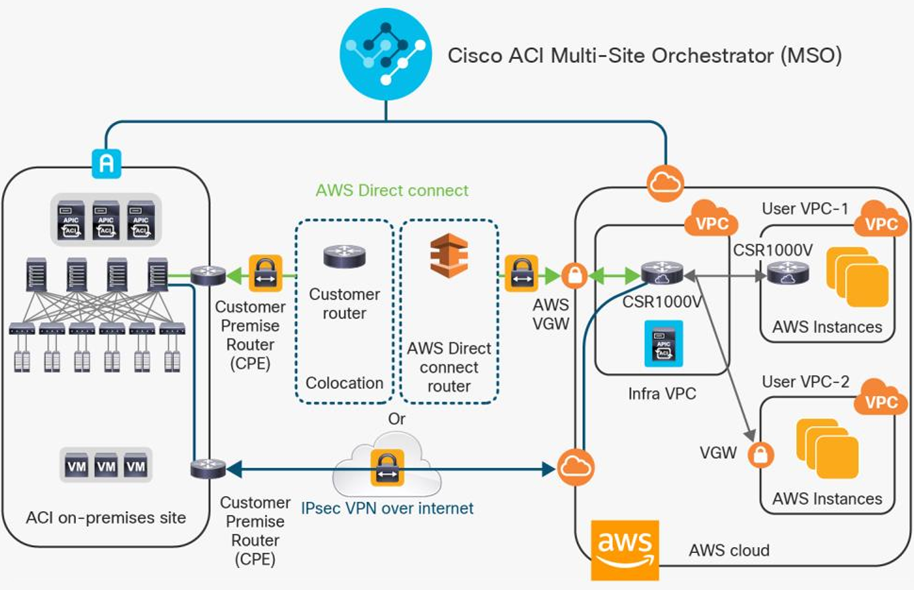 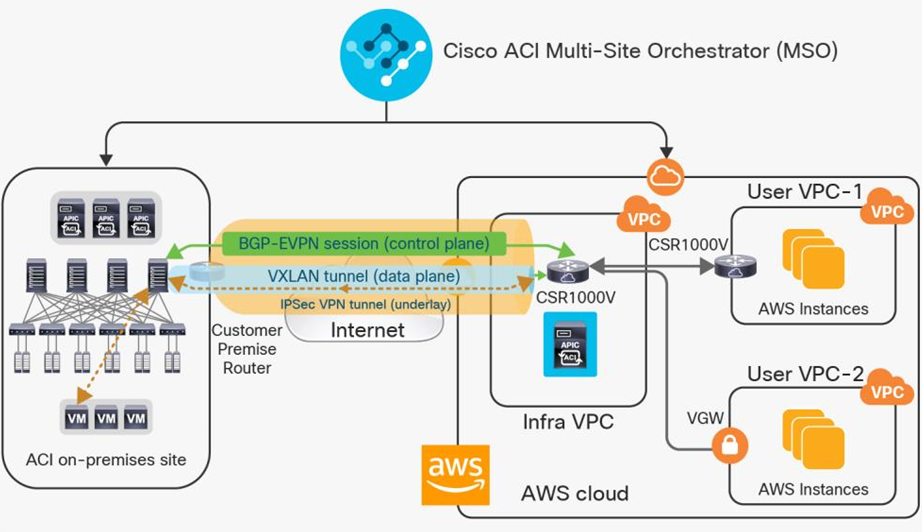 There were several AWS services used to implement Cisco Cloud ACI on AWS. Here are the most relevant:

In this post, we introduced the Cisco Cloud ACI solution that is available in AWS Marketplace. We learned that customers can use Cisco Cloud ACI to automate the management of end-to-end connectivity as well as the enforcement of consistent security policies for applications running in on-premises data centers and on AWS.

With the Cisco Cloud ACI architecture, customers and analysts see the benefit of seamless layer-in policy consistency, operational simplicity, and the flexibility to leverage services offered on AWS.

Cisco Systems is an APN Advanced Technology Partner. They provides a range of products for transporting data, voice, and video within buildings, across campuses, and around the world.