Unlocking Data from Existing Systems with a Serverless API Facade

In today’s modern world, it’s not enough to produce a good product; it’s critical that your products and services are well integrated into the surrounding business ecosystem. Companies lose market share when valuable data about their products or services are locked inside their systems. Business partners and internal teams use data from multiple sources to enhance their customers’ experience.

This blog post explains an architecture pattern for providing access to data and functionalities from existing systems in a consistent way using well-defined APIs. It then covers what the API Facade architecture pattern looks like when implemented on AWS using serverless for API management and mediation layer.

Modern applications are often developed with an application programming interface (API)-first approach. This significantly eases integrations with internal and third-party applications by exposing data and functionalities via well-documented APIs.

When building modern APIs for existing systems, you can use an architecture pattern called API Facade. This pattern creates a layer that exposes well-structured and well-documented APIs northbound, and it integrates southbound with the required interfaces and protocols that existing applications use. This pattern is about creating a facade, which creates a consistent view from the perspective of the API consumer—usually an application developer, and ultimately another application.

In addition to providing a simple interface for complex existing systems, an API Facade allows you to protect future compatibility of your solution. This is because if the underlying systems are modified or replaced, the facade layer will remain the same. From the API consumer perspective, nothing will have changed.

The API management layer exposes a set of well-designed, well-documented APIs with associated URLs, request parameters and responses, a list of supported headers and query parameters, and possible error codes and descriptions. A developer portal is used to help API consumers discover which APIs are available, browse the API documentation, and register for—and immediately receive—an API key to build applications. The APIs exposed by this layer can be used by external as well as internal consumers and enables them to build applications faster.

The mediation layer is responsible for integration between API and underlying systems. It transforms API requests into formats acceptable for different systems and then process and transform underlying systems’ responses into response and data formats the API has promised to return to the API consumers. This layer can perform tasks ranging from simple data manipulations, such as converting a response from XML to JSON, to much more complex operations where an application-specific client is required to run in order to connect to existing systems.

To build the API management and the mediation layer, you can leverage services from the AWS serverless platform.

Amazon API Gateway allows you to build the API management. With API Gateway you can create RESTful APIs and WebSocket APIs. It supports integration with the mediation layer running on containers on Amazon Elastic Container Service (ECS) or Amazon Elastic Kubernetes Service (EKS), and also integration with serverless compute using AWS Lambda. API Gateway allows you to make your APIs available on the Internet for your business partners and third-party developers or keep them private. Private APIs hosted within your VPC can be accessed by resources inside your VPC, or those connected to your VPC via AWS Direct Connect or Site-to-Site VPN. This allows you to leverage API Gateway for building the API management of the API facade pattern for internal and external API consumers.

When it comes to building the Mediation layer, AWS Lambda is a great choice as it runs your mediation code without requiring you to provision or manage servers. AWS Lambda hosts the code that ingests the request coming from the API management layer, processes it, and makes the required format and protocols transformations. It can connect to the existing systems, and then return the response to the API management layer to send it back to the system which originated the request. AWS Lambda functions run outside your VPC or they can be configured to access systems in your VPC or those running in your own data centers connected to AWS via Direct Connect or Site-to-Site VPN.

However, some of the most complex mediations may require a custom client or have the need to maintain a persistent connection to the backend system. In those cases, using containers, and specifically AWS Fargate, would be more suitable. AWS Fargate is a serverless compute engine for containers with support for Amazon ECS and Amazon EKS. Containers running on AWS Fargate can access systems in your VPC or those running in your own data centers via Direct Connect or Site-to-Site VPN.

When building the API Facade pattern using AWS Serverless, you can focus most of your resources writing the API definition and mediation logic instead of managing infrastructure. This makes it easier for the teams who own the existing applications that need to expose data and functionality to own the API management and mediation layer implementations. A team that runs an existing application usually knows the best way to integrate with it. This team is also better equipped to handle changes to the mediation layer, which may be required as a result of changes to the existing application. Those teams will then publish the API information into a developer portal, which could be made available as a central API repository provided by a company’s tools team.

The following figure shows the API Facade pattern built on AWS Serverless using API Gateway for the API management layer and AWS Lambda and Fargate for the mediation layer. It functions as a facade for the existing systems running on-premises connected to AWS via Direct Connect and Site-to-Site VPN. The APIs are also exposed to external consumers via a public API endpoint as well as to internal consumers within a VPC. API Gateway supports multiple mechanisms for controlling and managing access to your API. 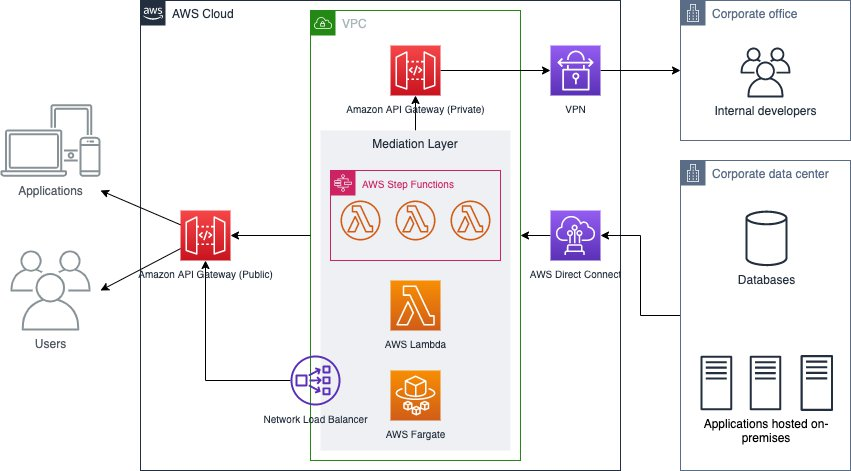 To provide an example of a practical implementation of this pattern we can look into UK Open Banking. The Open Banking standard set the API specifications for delivering account information and payment initiation services banks such as HSBC had to implement. HSBC internal landscape is hugely varied and they needed to harness the power of multiple disparate on-premises systems while providing uniform API to the outside world. HSBC shared how they met the requirements on this re:Invent 2019 session.

You can build differentiated customer experiences and bring services to market faster when you integrate your products and services into the surrounding business ecosystem. Your systems can participate in a business ecosystem more effectively when they expose their data and capabilities via well-established APIs. The API Facade pattern enables existing systems that don’t offer well-established APIs natively to participate on this well-integrated business ecosystem. By building the API Facade pattern on the AWS serverless platform, you can focus on defining the APIs and the mediation layer code instead of spending resources on managing the infrastructure required to implement this pattern. This allows you to implement this pattern faster.