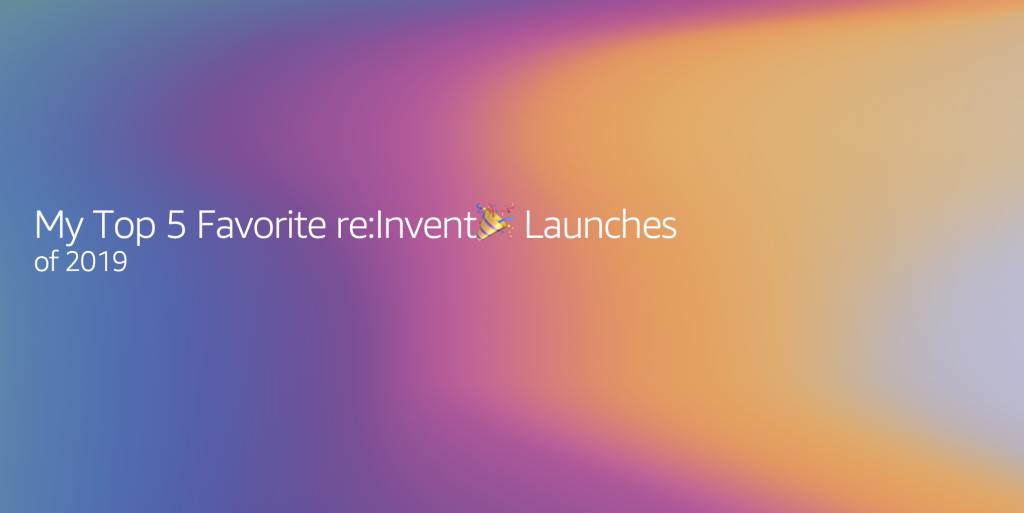 While re:Invent 2019 may feel well over, I’m still feeling elated and curious about several of the launches that were announced that week. Is it just me, or did some of the new feature announcements seem to bring us closer to the Scifi worlds (i.e. AWS WaveLength anyone? and don’t get me started on Amazon Braket) of the future we envisioned as kids?

The future might very well be here. Can you handle it?

If you can, then I’m pumped to tell you why the following 5 launches of re:Invent 2019 got me the most excited.

[CAVEAT: Out of consideration for your sanity, dear reader, we try to keep these posts to a maximum word length. After all, I wouldn’t want you to fall asleep at your keyboard during work hours! Sadly, this also means I limited myself to only sharing a set number of the cool, new launches that happened. If you’re curious to read about ALL OF THEM, you can find them here: 2019 re:Invent Announcement Summary Page.]

First of all, let’s address the ?elephant in the room? and admit that 99.9% of us don’t really know what Quantum Computing is. But we want to! Because it sounds so cool and futuristic. So let’s give it a shot…

According to The Internet, a quantum computer is any computational device that uses the quantum mechanical phenomenas of superposition and entanglement to perform data operations. The basic principle of quantum computation is that quantum properties can be used to represent data and perform operations on it. Also, fun fact… in a “normal” computer —like your laptop— that data…that information… is stored in something called bits. But in a quantum computer, it is stored as qubits (quantum bits).

Quantum Computing is still in its infancy. Are you wondering where it will go?

Amazon Braket is a new service that makes it easy for scientists, researchers, and developers to build, test, and run quantum computing algorithms.

The way it works is that Amazon Braket provides a development environment that enables you to design your own quantum algorithms from scratch or choose from a set of pre-built algorithms. Once you’ve picked your algorithm of choice, Amazon Braket provides you with a simulation service that helps you troubleshoot and verify your implementation of said algorithm. Once you’re ready, you could also choose to run your algorithm on a real quantum computer from one of our quantum hardware providers (i.e. D-Wave, IonQ, and Rigetti, etc).

So what are you waiting for? Go explore the future of quantum computing with Amazon Braket!

??Don’t forget to check out the docs: aws.amazon.com/braket
⚠️Sign up to get notified when it’s released.

When I was a kid in the 80s, we were still on the beginning stages of the first wireless technology.

It had a lot of similarities to an old AM/FM radio. And just like with radio stations, cell phone calls ended up recieving interference from other callers ALL THE TIME. Sometimes, the calls became staticy if you were too far away from cell phone towers.

Phew, that was quite the brain?dump?️, wasn’t it?

Every generation of wireless technology has been defined by the speed of data transmission. So just how fast are we hoping 5G will be? Well, to give you a baseline…our fastest current 4G mobile networks offer about 45Mbps (megabits per second). But Qualcomm believes 5G could achieve browsing and download speeds about 10 to 20 times faster!

What makes this speed improvement possible is that 5G technology makes better use of the radio spectrum. It enables more devices to access the mobile internet at the same time. Thus, it’s much better at handling thousands of devices simultaneously, without the congestion that was experienced in previous wireless generations.

At this speed, access to low latency services is really important. Why? Low latency is optimized to process a high volume of data messages with minimal delay (latency). This is exactly what you want if your business requires near real-time access to rapidly changing data.

AWS Wavelength brings AWS services to the edge of the 5G network. It allows you to build the next generation of ultra-low latency apps using familiar AWS services, APIs, and tools. To deploy your app to 5G, simply extend your Amazon Virtual Private Cloud (VPC) to a Wavelength Zone and then create AWS resources like Amazon Elastic Compute Cloud (EC2) instances and Amazon Elastic Block Storage (EBS) volumes.

The other neat news is that AWS Wavelength will be in partnership with Verizon starting in 2020, as well as working with other carriers like Vodafone, SK Telecom, and KDDI to expand Wavelength Zones to more locations by the end of 2020.

??Don’t forget to check out the docs: aws.amazon.com/wavelength
⚠️Sign up to get notified when it’s released.

I do not have a Machine Learning (ML) background. At all.

But I do have a piano and musical background. ??I learnt how to play the piano at 4, and I first got into composing when I was about 12 years old. Not having a super fancy piano instructor at the time, I remember wondering how an average person could learn how to compose, regardless of your musical background.

AWS DeepComposer includes tutorials, sample code, and training data that can be used to get started building generative models, all without having to write a single line of code! This is great, because it helps encourage people new to ML to still give it a whirl.

Now the other neat thing about AWS DeepComposer, is that it opens the door for you to learn about Generative AI — one of the biggest advancements in AI technology . You’ll learn about Generative Adversarial Networks (GANs), a Generative AI technique that puts two different neural networks against each other to produce new and original digital works based on sample inputs. With AWS DeepComposer, you are training and optimizing GAN models to create original music. ?

Is that awesome, or what?

??Don’t forget to check out the docs: aws.amazon.com/deepcomposer
⚠️Sign up to get notified when it’s released.

4. Amplify: now it’s ready for iOS and Android devs too!

I used to be a CSS developer. Joining the Back-End world was an accident for me, since I first assumed I’d always be a Front-End developer.

Amplify makes it easy for developers to build and deploy Full-Stack apps that leverage the cloud. It’s a service that really helps bridge the gap between Front and Back-End development. Seeing Amplify now offer SDKs and libraries for iOS and Android devs sounds even more inclusive and exciting!

The Amplify Framework (open source project for building cloud-enabled mobile and web apps) is ready for iOS and Andriod developers! There are now — in preview— Amplify iOS and Amplify Android libraries for building scalable and secure cloud powered serverless apps.

Developers can now add capabilities of Analytics, AI/ML, API (GraphQL and REST), DataStore, and Storage to their mobile apps with these new iOS and Android Amplify libraries.

This release also included support for the Predictions category in Amplify iOS that allows developers to easily add and configure AI/ML use cases with very few lines of code. (And no machine learning experience required!) This allows developers to then accomplish other use cases of text translation, speech to text generation, image recognition, text to speech, insights from text, etc. You can even hook it up to services such as Amazon Rekognition, Amazon Translate, Amazon Polly, Amazon Transcribe, Amazon Comprehend, and Amazon Textract.

In my 1st year at AWS as a Developer Advocate, I got really into robotics and IoT. I’m not giving that up anytime soon, but for 2020, I’m also excited to serve more customers that are new to core AWS services. You know, things like storage, compute, containers, databases, etc.

Thus, it came as no surprise to me when this new launch caught my eye… ?

EC2 Image Builder is a service that makes it easier and faster to build and maintain secure images. It greatly simplifies the creation, patching, testing, distribution, and sharing of Linux or Windows Server images.

In the past, creating custom virtual machine (VM) images felt way too complex and time consuming. Most dev teams had to manually update VMs or build automation scripts to maintain these VM images.

Today, Amazon’s Image Builder service simplifies this process by allowing you to create custom OS images via an AWS GUI environment. You can also use it to build an automated pipeline that customizes, tests, and distributes your images in addition to keeping them secure and up-to-date. Sounds like a win-win to me. ?

??Don’t forget to check out the docs: aws.amazon.com/image-builder