SRT is only one of the delivery content types and protocols that Live supports. For a complete list, see the AWS Elemental Live User Guide.

In this post, we are presenting current SRT support in Live, with particular attention to setting up a workflow with AWS Elemental MediaConnect as an SRT destination. We are also showing a few configuration aspects of SRT outputs in Elemental Live.

Elemental Live supports ingest of SRT sources in caller mode. It supports delivery of SRT outputs in either caller or listener modes.

The following Table-1 provides an overview of current SRT protocol support in Live:

Caller and listener, sender and receiver

With SRT, the encoder and the downstream destination each have two roles – sender and receiver, and caller and listener.

In the following sections we are presenting how to set up the workflow in MediaConnect and Live. The MediaConnect flow and the Elemental Live event must work together.

Note: Elemental Live and MediaConnect can be configured seamlessly to work together using the flow ARN; however, in this post we are demonstrating the more generic configuration that will work with any SRT receiver.

Example of configuration on AWS Elemental MediaConnect (listener) side

The following is an illustration of the setup on the AWS Management console of a MediaConnect flow with a Standard source. The fields that relate to SRT are highlighted. 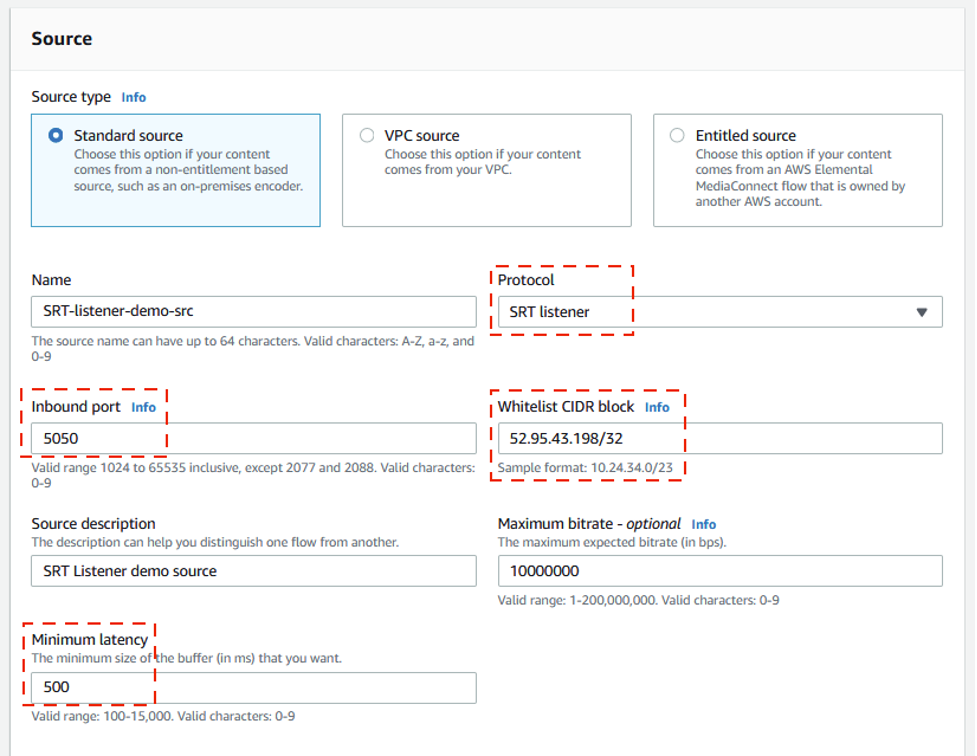 Consider the following when setting up the flow to listen for SRT requests:

Here is an illustration of the setup for decryption in the MediaConnect flow source. Notice that in MediaConnect, you set up with the Secret ARN. You don’t enter the actual passphrase anywhere in MediaConnect.

After the flow is created, MediaConnect will associate an inbound IP address with the flow. Live will use this address plus the inbound port as the destination, as shown in figure 5.

Example of configuration on the Elemental Live (caller) side

In this example, we haven’t configured for redundancy, so only the fields for the primary destination are completed. Notice how the values we entered follow the preceding guidelines. 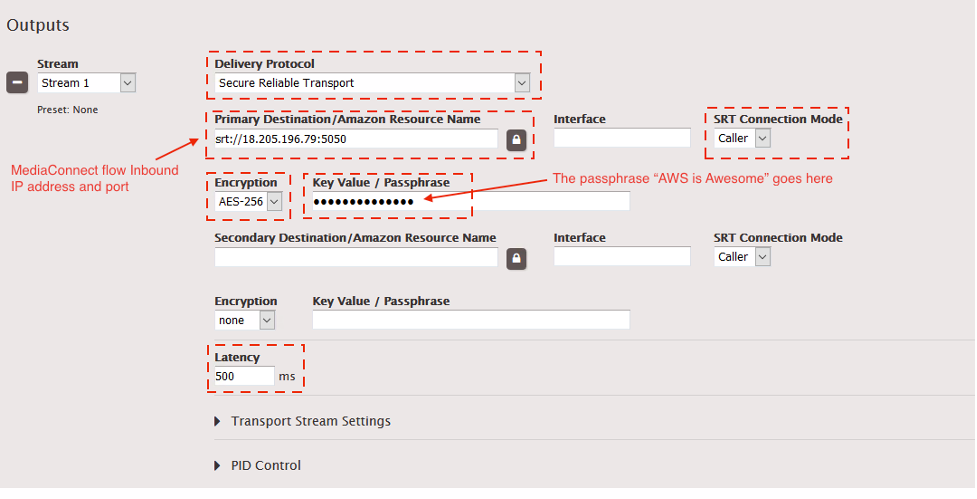 In the Live web interface, consider the following when creating the output:

In the sample graph in figure 7, the source bitrate shows as 6 mbps. Verify that this adds up. In our example, we know that we set up the output with a video bitrate of 5 mbps. When you add in the audio, the TS overhead, and the SRT control packets, a source bitrate of 6 mbps looks reasonable. 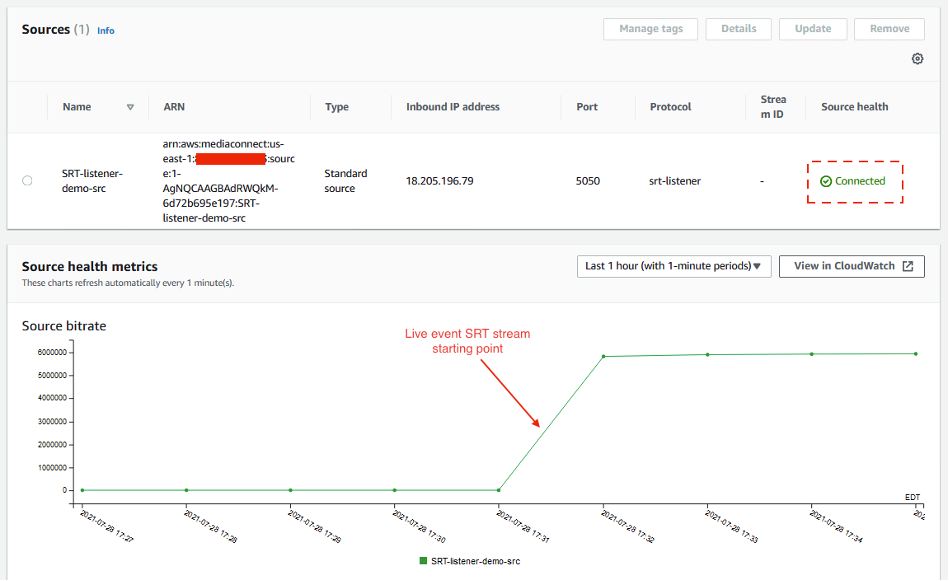 A typical scenario for setting up Elemental Live in SRT listener mode is when the downstream destination or receiver is located behind a NAT or firewall. That is, the receiver is not reachable from external networks or the internet. Therefore, the Elemental Live cannot initiate the SRT session handshake as a caller. 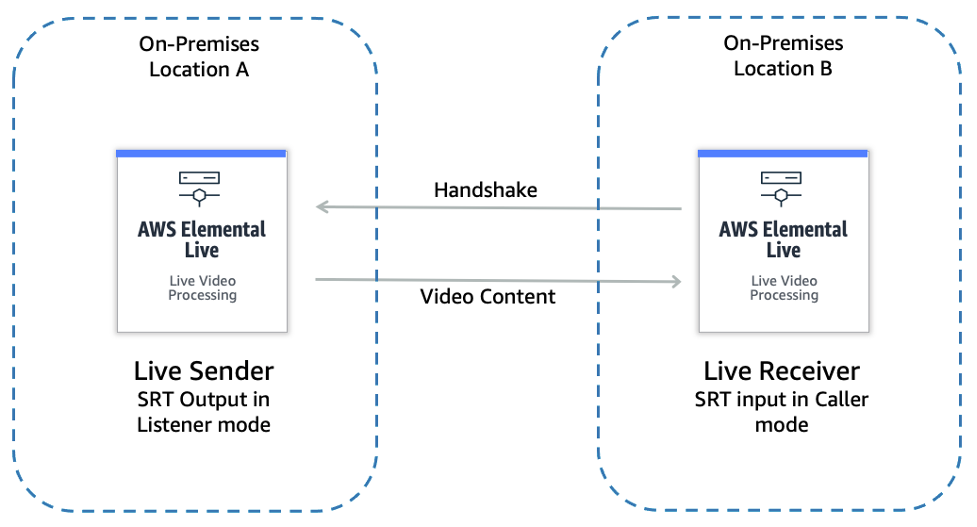 Configure the Live Sender and the Live Receiver so that they work together. Consider the following:

Example of configuration on the SRT listener (Live Sender) side

Here is an illustration of the setup of the SRT listener output in the Live Sender.

The configuration of SRT output in listener mode is similar to what was discussed previously for the caller mode, except for following two differences:

Example of configuration on the SRT caller (Live receiver) side

Here is an illustration of the setup of the input in Live Receiver. Notice that the IP address “10.13.133.77” in figure 10 is the private IP address of the Live Sender.

SRT outputs can be set up in a redundant configuration to implement redundant contribution streams to the downstream system. Configuring redundancy in an SRT caller scenario follows the same model as redundancy with other output types, including RTMP or Zixi outputs.

The redundancy configuration when Live is the SRT listener follows a different model, which we will now discuss. 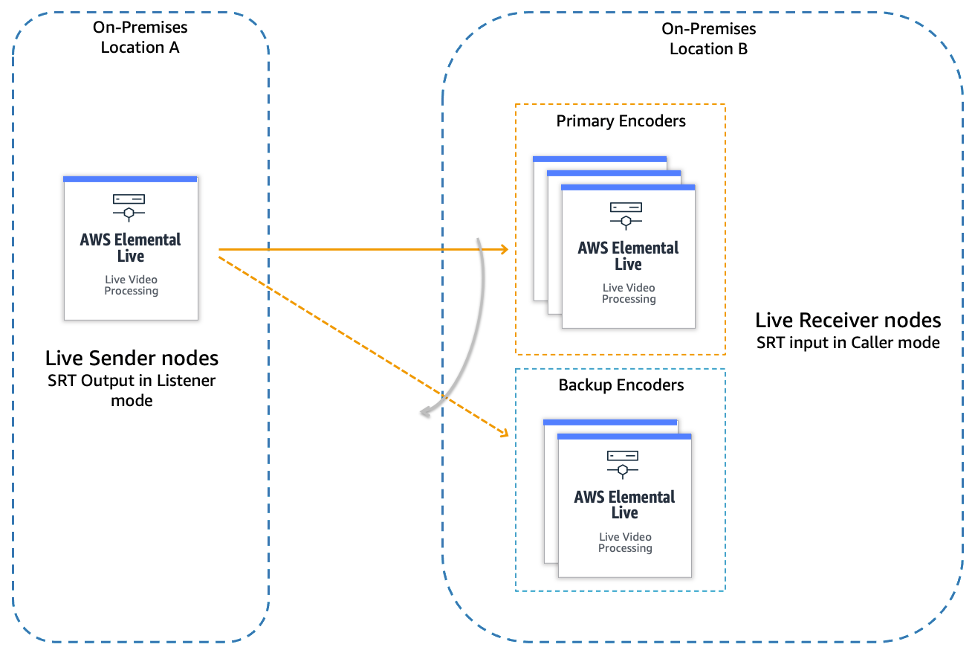 Consider the workflow shown in figure 13 where the downstream system (the on-premises Location B) is an N+M cluster that consists of N primary Live nodes and M backup Live nodes. If the primary SRT receiver node chassis fails, then one the backup nodes will be promoted to replace the failed primary node.

In this scenario, the receiver node IP address will change, but from the SRT perspective, this change has no impact because the newly promoted receiver node is the party that calls the source to initiate the session.

If you followed the instructions and implemented the setup described in the “Live as Caller” scenario, make sure that you delete the AWS resources after your testing is completed, to avoid incurring any unnecessary cost in your AWS account.

In this post, we presented the new SRT outputs feature released in AWS Elemental Live software version 2.22. We demonstrated the configuration of SRT outputs in both caller and listener modes using real life examples. We also discussed how to architect for redundancy using SRT listener outputs. For further details on these topics please get in touch with your AWS Elemental account team.