Let’s start by looking at what Exchange can look like on AWS.

Architectural Diagram for Exchange on AWS

In the following diagram, we created a scenario where a company has extended their Active Directory forest (corp.example.com) to AWS by adding domain controllers in AWS. The company’s Exchange organization has also been extended to AWS by adding Exchange servers in AWS. Once you have extended your on-premises Active Directory and Exchange environments onto AWS, you can easily move your users’ mailboxes into the new environment.

In the architecture, Microsoft Exchange runs on Amazon EC2 instances in the same Active Directory forest as your on-premises Active Directory forest.  This architecture is commonly used when customers want to move some or all of their Exchange servers out of their data center and into the AWS cloud. Some customers also take this approach during the process of upgrading their Microsoft Exchange Server environment to a newer version on AWS. To help modernize your Microsoft Exchange Server workloads, we offer AWS Professional Services and AWS Partner Network support.

Now that we know what Exchange looks like running on AWS, let’s dive into the tutorial.

Step 1: Set up connectivity between on-premises and AWS environments

I generally recommend the Direct Connect approach instead of VPN connection for production workloads such as a hybrid Active Directory and Exchange architecture. This is because Direct Connect provides more predictable latency and consistent bandwidth between your data center and your VPC. See the AWS Direct Connect documentation for more information.

During this process, it is important to design the IP address ranges (CIDR) for your AWS cloud environment so that they do not overlap with your on-premises network. You must then establish network routing so that packets can route between the on-premises and AWS environments.

After the IP ranges are assigned, plan the Active Directory site(s), AD subnets objects, and AD site links that are needed for the network created in AWS.

Once you have established the network connection, the next step is to design the DNS resolution between your on-premises servers and the servers on AWS so that DNS queries can be resolved for resources either on-premises or in the cloud. This is referred to as a “hybrid DNS architecture.”

One option is to change the DNS server setting on the servers running in AWS to point to the IP addresses of the on-premises DNS servers. You may also need to add the AD domain name to the DNS suffix list (see following figure). 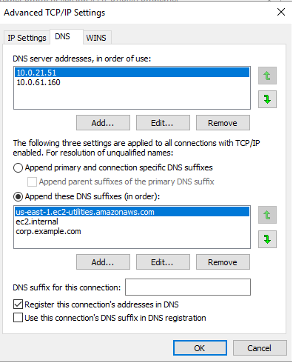 Once DNS servers are set up in AWS, then these DNS setting could be updated to point to the DNS servers in AWS.

If you have Route 53 private zones and must establish hybrid DNS, another option is to use Route 53 resolvers. The blog post, New – Amazon Route 53 Resolver for hybrid clouds, discusses how to set up hybrid DNS and outlines how to use Amazon Route 53 Outbound and Inbound Endpoints to enable hybrid DNS between on-premises and AWS.

For more information on hybrid DNS, please see this blog.

Once the DNS server role is installed on the AD domain controllers running in AWS, update the Route 53 Resolver Outbound Endpoint conditional forwarding rules to forward DNS queries for the AD DNS domain (for example, corp.example.com) to these new AD/DNS servers.

On the AD DC/DNS servers running in AWS, set up a DNS forwarding rule to forward unresolved DNS queries to Route 53. Route 53 has the ability to host private zones, which are used by AWS PrivateLink endpoints (see here for more information). Thus, if you want to take advantage of PrivateLink endpoint services, it is important that you modify the DNS setting on the AD/DNS servers to forward unresolved DNS queries to the Route 53 service versus the internet root DNS servers.

The following screenshot shows the Forwarder setting on the AD/DNS server. We set the IP address to the .2 of the subnet (for example, 10.0.0.2). The .2 address is reserved by AWS as the AWS DNS server (see here for more information). 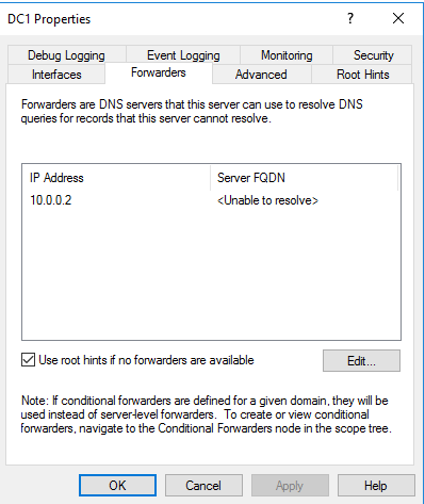 Once these steps have been completed, move your mailboxes onto the Exchange servers that are running in AWS. Start by migrating test mailboxes before you migrate larger populations of real users.

The rest of this blog shows you how to set up an AD/Exchange environment in a lab environment. To help you, AWS has created an AWS Quick Start for Microsoft Exchange. The Quick Start deploys two Microsoft Exchange servers in a database availability group (DAG) configuration with two Active Directory domain controllers, as shown in the following diagram. 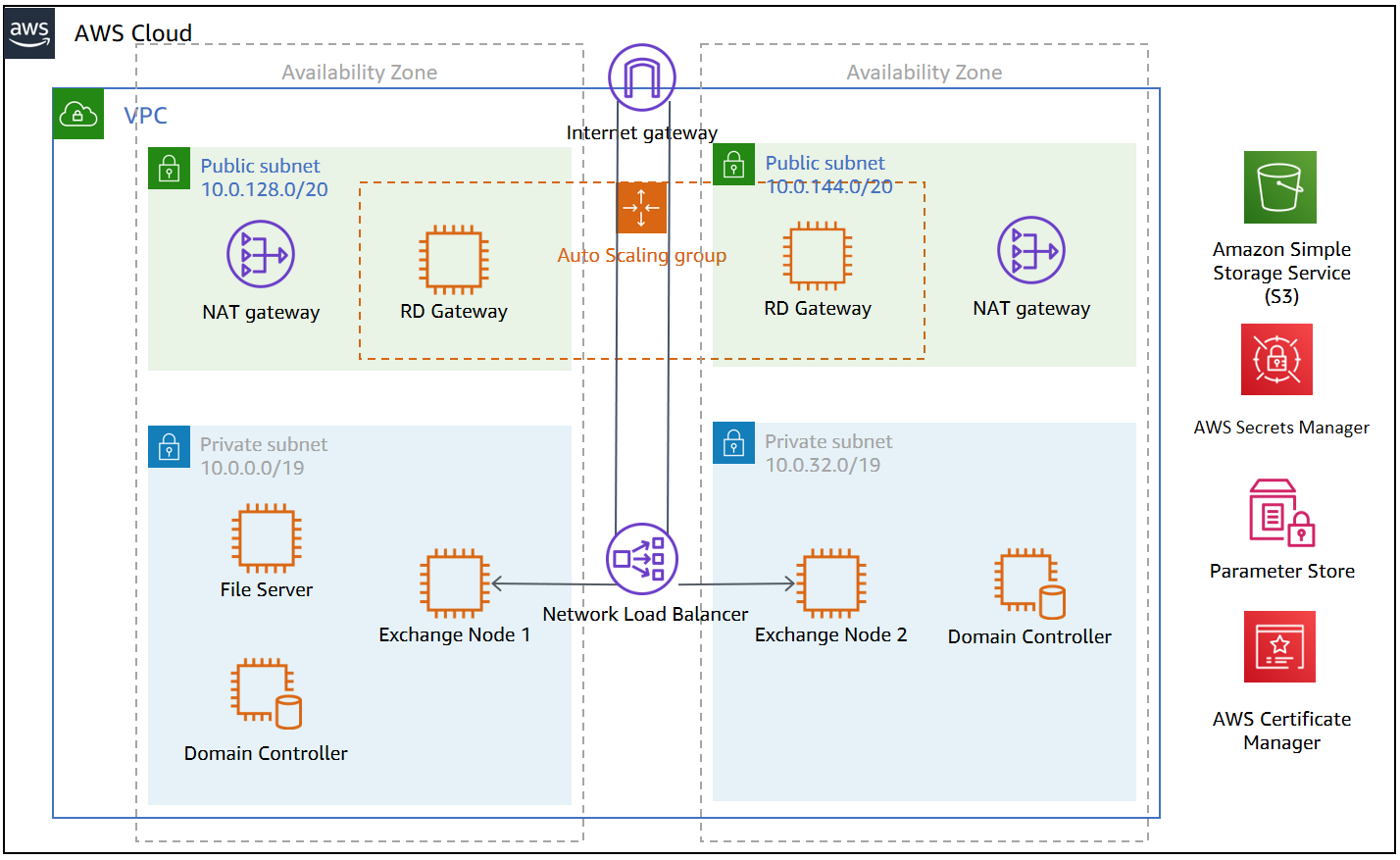 Figure 4:  Exchange environment that will be created by AWS CloudFormation

Each Exchange server and domain controller is created in a separate Availability Zone (AZ) for resiliency.

Next, connect to the remote desktop gateway (RDGW) server and the Microsoft Exchange server. 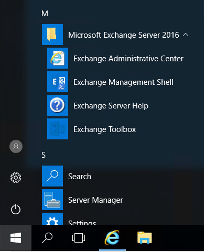 You should now be able to access the Exchange Administration Center. 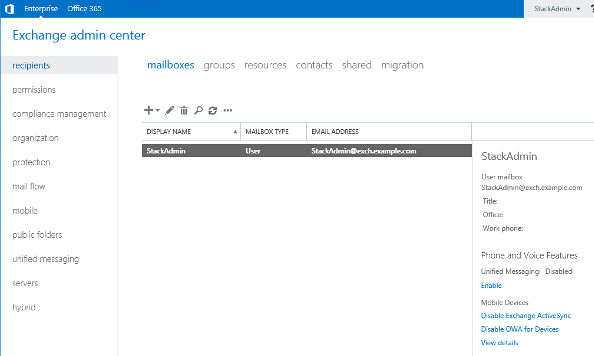 Congratulations!  You have learned how to set up Microsoft Exchange in AWS. In the hands-on lab, you also got experience using AWS Infrastructure as Code (IaC) technology called AWS CloudFormation to automate the build of a Microsoft Active Directory and Microsoft Exchange Server environment. Once Exchange is set up in AWS, you can use the same AD and Exchange management tools to manage the servers on AWS that you used on-premises. In the second part of this blog series, I will walk through another common architecture for running Exchange in AWS, the Exchange resource forest architecture.