Many organizations use a setup that includes multiple VPCs based on the Amazon VPC service, with databases isolated in separate VPCs for security, auditing, and compliance purposes. This blog post shows how you can use AWS Glue to perform extract, transform, load (ETL) and crawler operations for databases located in multiple VPCs.

The solution presented here uses a dedicated AWS Glue VPC and subnet to perform the following operations on databases located in different VPCs:

In this blog post, we’ll go through the steps needed to build an ETL pipeline that consumes from one source in one VPC and outputs it to another source in a different VPC. We’ll set up in multiple VPCs to reproduce a situation where your database instances are in multiple VPCs for isolation related to security, audit, or other purposes.

For this solution, we create a VPC dedicated to AWS Glue. Next, we set up VPC peering between the AWS Glue VPC and all of the other database VPCs. Then we configure an Amazon S3 endpoint, route tables, security groups, and IAM so that AWS Glue can function properly. Lastly, we create AWS Glue connections and an AWS Glue job to perform the task at hand.

To simulate these scenarios, we create four VPCs with their respective IPv4 CIDR ranges. (Note: CIDR ranges can’t overlap when you use VPC peering.)

Next, we peer our VPCs together to ensure that AWS Glue can communicate with all of the database targets and sources. This approach is necessary because AWS Glue resources are created with private addresses only. Thus, they can’t use an internet gateway to communicate with public addresses, such as public database endpoints. If your database endpoints are public, you can alternatively use a network address translation (NAT) gateway with AWS Glue rather than peer across VPCs.

These peering connections can be across separate AWS Regions if needed. The database VPCs are not peered together; they are all peered with the AWS Glue VPC instead. We do this because AWS Glue connects to each database from its own VPC. The databases don’t connect to each other.

We need to add an Amazon S3 endpoint to the AWS Glue VPC (VPC 4). During setup, associate the endpoint with the route table that your private subnet uses. For more details on creating an S3 endpoint for AWS Glue, see Amazon VPC Endpoints for Amazon S3 in the AWS Glue documentation.

AWS Glue uses S3 to store your scripts and temporary data to load into Amazon Redshift.

Add the following routes to the route tables used by the respective services’ subnets. These routes are configured along with existing settings.

Each database’s security group must allow traffic to its listening port (3306, 5432, 5439, and so on) from the AWS Glue VPC for AWS Glue to be able to connect to it. It’s also a good idea to restrict the range of source IP addresses as much as possible.

Amazon RDS for PostgreSQL allows traffic to its listening port from the same:

Amazon Redshift does it as so:

AWS Glue does it as so:

Make sure that you have an AWS Glue IAM role with access to Amazon S3. You might want to provide your own policy for access to specific Amazon S3 resources. Data sources require s3:ListBucket and s3:GetObject permissions. Data targets require s3:ListBucket, s3:PutObject, and s3:DeleteObject permissions. For more information on creating an Amazon S3 policy for your resources, see Policies and Permissions in the IAM documentation.

Or you can create an S3 policy that’s more restricted to suit your use case.

The Amazon RDS for MySQL connection in AWS Glue should look like this: 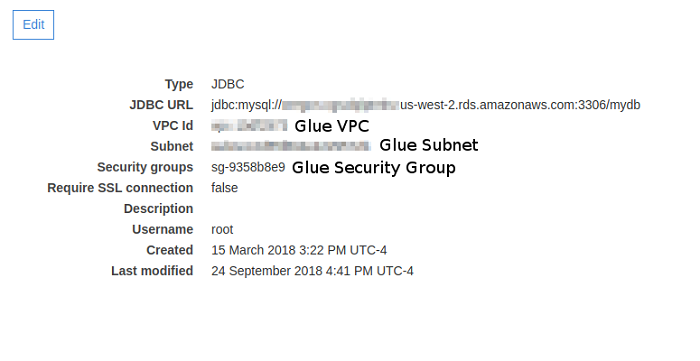 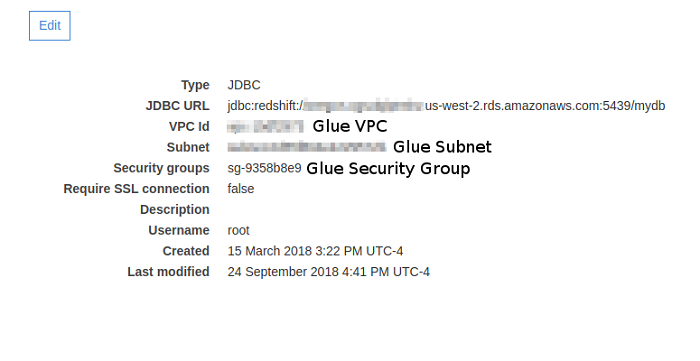 The Amazon RDS for PostgreSQL connection should look like this: 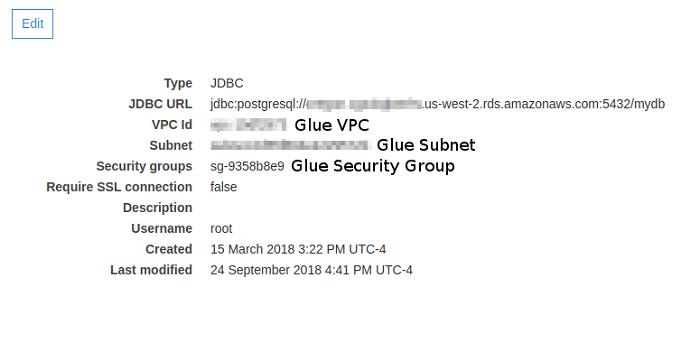 The following screenshots show the steps to create a job in the AWS Glue Management Console. 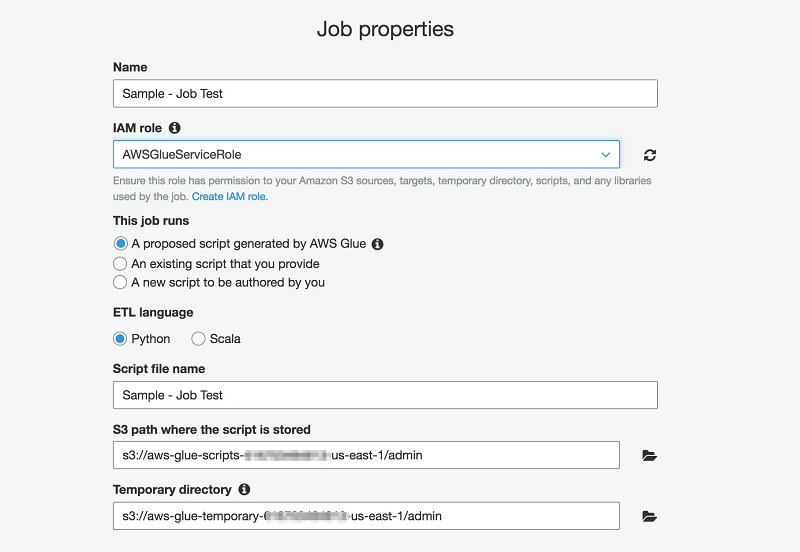 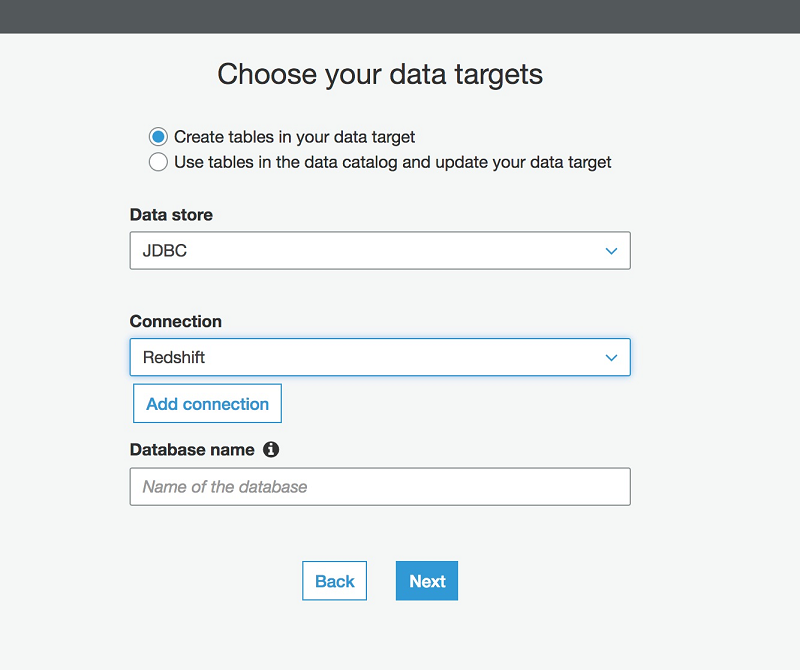 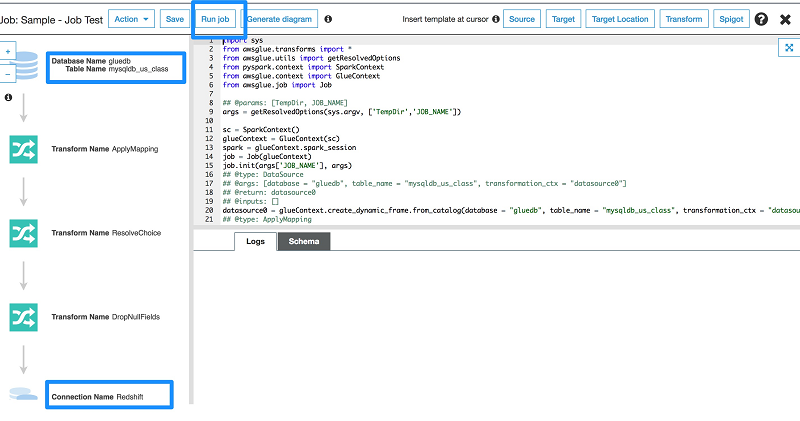 Following are some of examples of loading data from source tables to target instances. These are simple one-to-one mappings, with no transformations applied. Notice that the data sources and data sink (target) connection configuration access multiple VPCs from a single AWS Glue job.

In this blog post, you learn how to configure AWS Glue to run in a separate VPC so that it can execute jobs for databases located in multiple VPCs.

The benefits of doing this include the following:

If you found this post useful, be sure to check out Restrict access to your AWS Glue Data Catalog with resource-level IAM permissions and resource-based policies, and Using Amazon Redshift Spectrum, Amazon Athena, and AWS Glue with Node.js in Production.

Nivas Shankar is a Senior Big Data Consultant at Amazon Web Services. He helps and works closely with enterprise customers building big data applications on the AWS platform. He holds a Masters degree in physics and is highly passionate about theoretical physics concepts. He enjoys spending time with his wife and two adorable kids. In his spare time, he takes his kids to tennis and football practice.

Ian Eberhart is a Cloud Support Engineer on the Big Data team for AWS Premium Support. He works with customers on a daily basis to find solutions for moving and sorting their data on the AWS platform. In his spare time, Ian enjoys seeing independent and weird movies, riding his bike, and hiking in the mountains.