You can manage user roles with different AWS Identity and Access Management (IAM) policies in the code repository of CodeCommit. You can build your collaborative development process with pull requests and approval rules. The process described in this post only requires you to manage the developers’ role, without forking the source repository for individual developers. CodeCommit pull requests can integrate numerous code analysis services as approvers to improve code quality and mitigate security vulnerabilities, such as SonarQube static scanning and the ML-based code analysis service Amazon CodeGuru Reviewer.

The CodeCommit-based agile development process described in this post has the following characteristics:

This agile development process can use AWS CloudFormation and AWS Cloud Development Kit (AWS CDK) to orchestrate AWS resources with the best practice of infrastructure as code. You can manage hundreds of repositories in your organization and automatically provision new repositories and related DevOps resources from AWS after the pull request of your IaC as a new application is approved. This makes sure that you’re managing the code repository and DevOps resources in a secure and compliant way. You can use it as a reference solution for your organization to manage large-scale R&D resources.

In the following use case, you’re working on a Java-based project AWS Toolkit for JetBrains. This application has developers that can submit code via pull requests. Each pull request is automatically checked and validated by CodeBuild builds. The owners of the project can review the pull request and merge it to the main branch. The code submitted to the main branch triggers the continuous integration to build the project artifacts.

The following diagram illustrates the components built in this post and their role in the DevOps process. 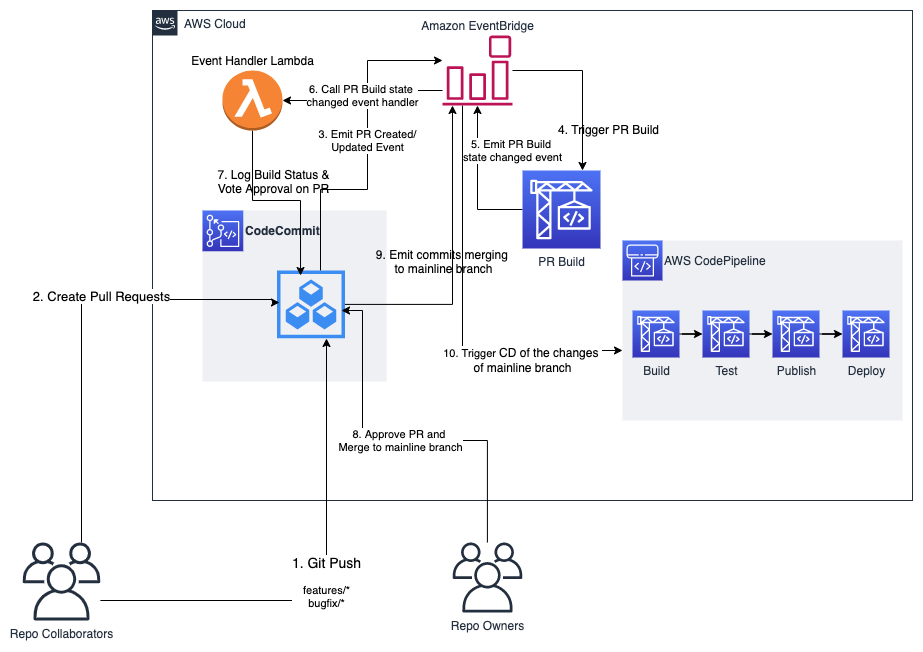 For this walkthrough, you should meet the following prerequisites:

Clone the sample code from the Github repo with your preferred Git client or IDE and view branch aws-toolkit-jetbrains, or download the sample code directly and unzip it into an empty folder.

Open the terminal or command prompt of your operating system, enter the directory where the sample code is located, enter the following code to initialize the environment, and install the dependency packages:

After successfully initializing the AWS CDK environment and installing the dependencies of the sample application, enter the following code to deploy the application:

Because the application creates the IAM roles and policies, AWS CDK requires you to confirm security-related changes before deploying it. You see the following outputs from the command line.

Enter y to confirm the security changes, and AWS CDK begins to deploy the application. After a few minutes, you see output similar to the following code, indicating that the application stack has been successfully deployed in your AWS account:

As shown in the preceding code, the output of successful deployment indicates that the ARN of two IAM roles were created on behalf of the owner and development collaborator of the source code repository.

After successfully deploying the app, you can sign in to the CodeCommit console and browse repositories. The following screenshot shows three repositories.

For this post, we use three repositories to demonstrate configuring the different access permissions for different teams in your organization. As shown in the following screenshot, the repository CodeCommitDevopsModelStack-MyApp1 is tagged to grant permissions to the specific team abc. 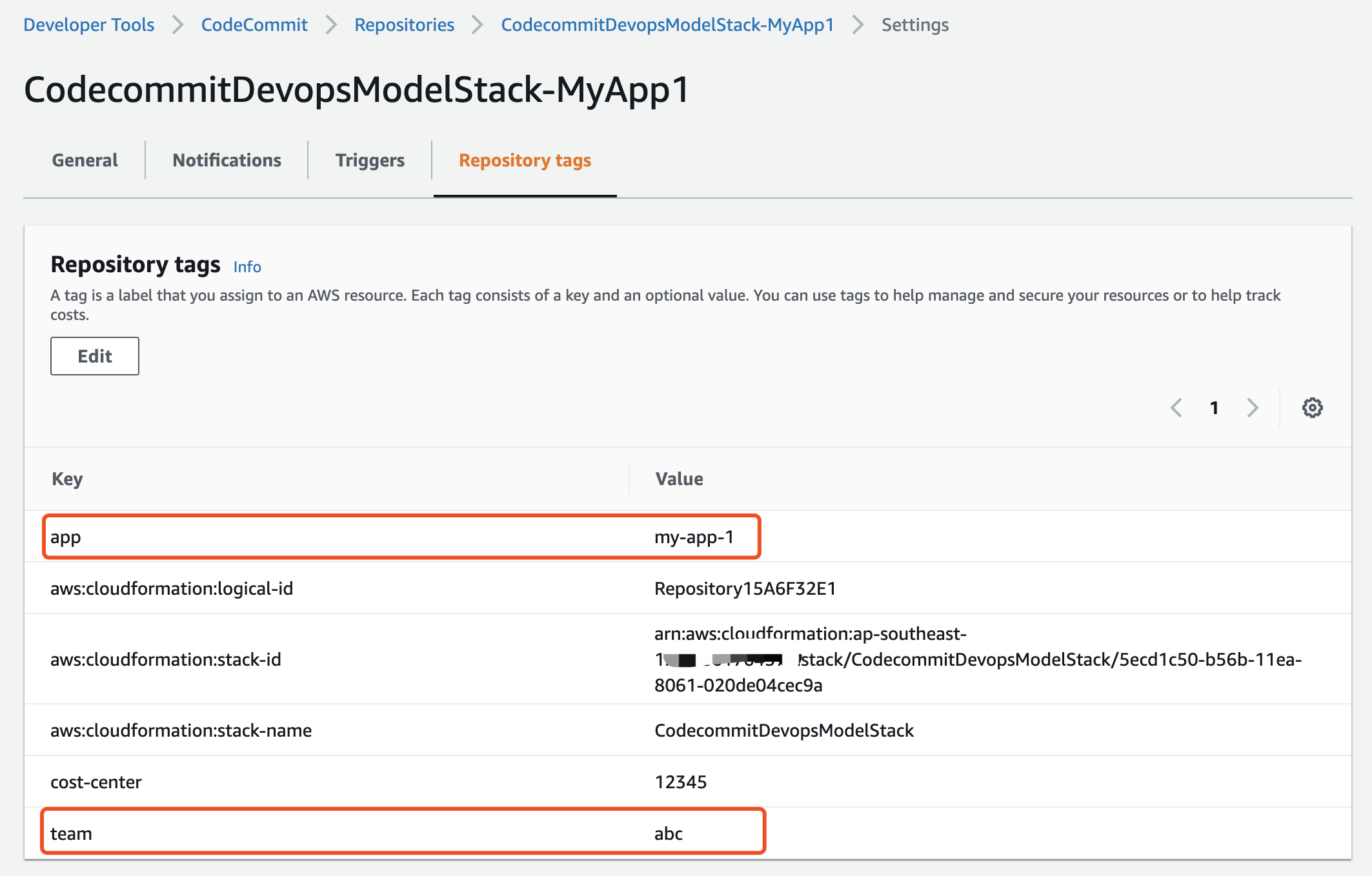 The IAM roles for the owner and development collaborator only have access to the code repository with the following tags combination:

Configuring CodeCommit repository access on behalf of owner and collaborator

Next, you configure the current user to simulate the owner and development collaborator via IAM’s AssumeRole.

Replace the role_arn in the owner and collaborator sections with the corresponding output after successfully deploying the sample app.

If the AWS CLI isn’t using the default profile, replace the value of source_profile with the profile name you’re currently using.

Make the region consistent with the value configured in source_profile. For example, this post uses ap-southeast-1.

After saving the modification of the profile, you can test this configuration from the command line. See the following code:

You can also grant IAM policies starting with CodecommitDevopsmodelStack-CodecommitCollaborationModel to existing IAM users for the corresponding owner or collaborator permissions.

The new code repository CodecommitdevopsmodelStack-MyApp1 is an empty Git repository without any commit. You can use the AWS Toolkit for JetBrains project as the existing local codebase and push the code to the repository hosted by CodeCommit.

Enter the following code from the command line:

For this use case, you act as the collaborator of the repository implementing a new feature for aws-toolkit-jetbrains, then follow the development process to submit your code changes to the main branch.

Enter the following code from the command line:

The preceding code submits the changes of the new feature to a branch with the prefix features/ and creates a pull request to merge the change into the main branch.

On the CodeCommit console, you can see that a pull request called My feature "Short Description". created by the development collaborator has passed the sanity checking build of the pull request and gets an approval voting (it takes about 15 minutes to complete the checking build in this project). 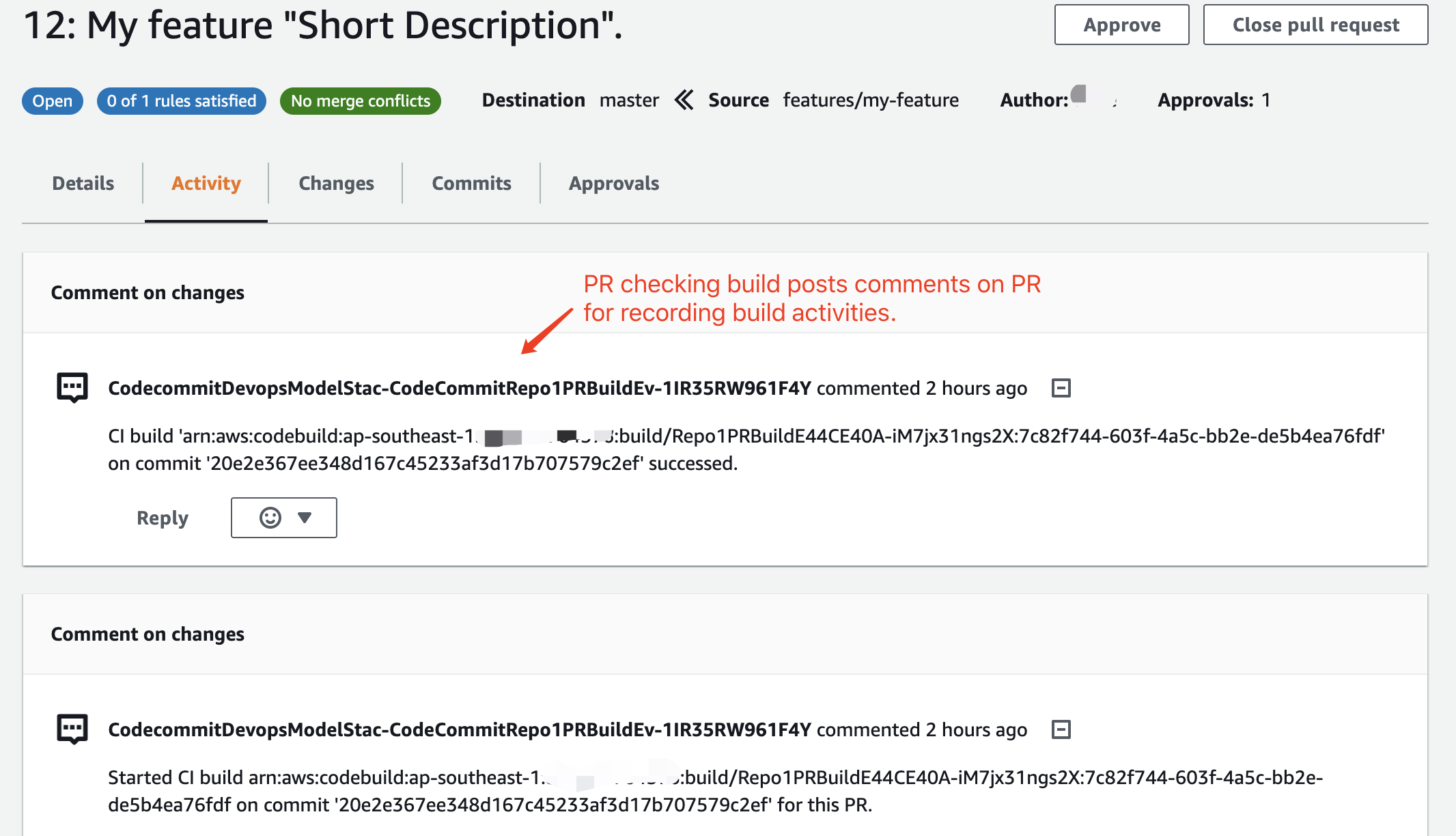 The owner of the repository also needs to review the pull request with one approval at least, then they can merge the repository to the main branch. The pull request on the CodeCommit console supports several code review features, such as change comparison, in-line comments, and code discussions. For more information, see Using AWS CodeCommit Pull Requests to request code reviews and discuss code. The following screenshot shows the review tool on the CodeCommit console, on the Changes tab. 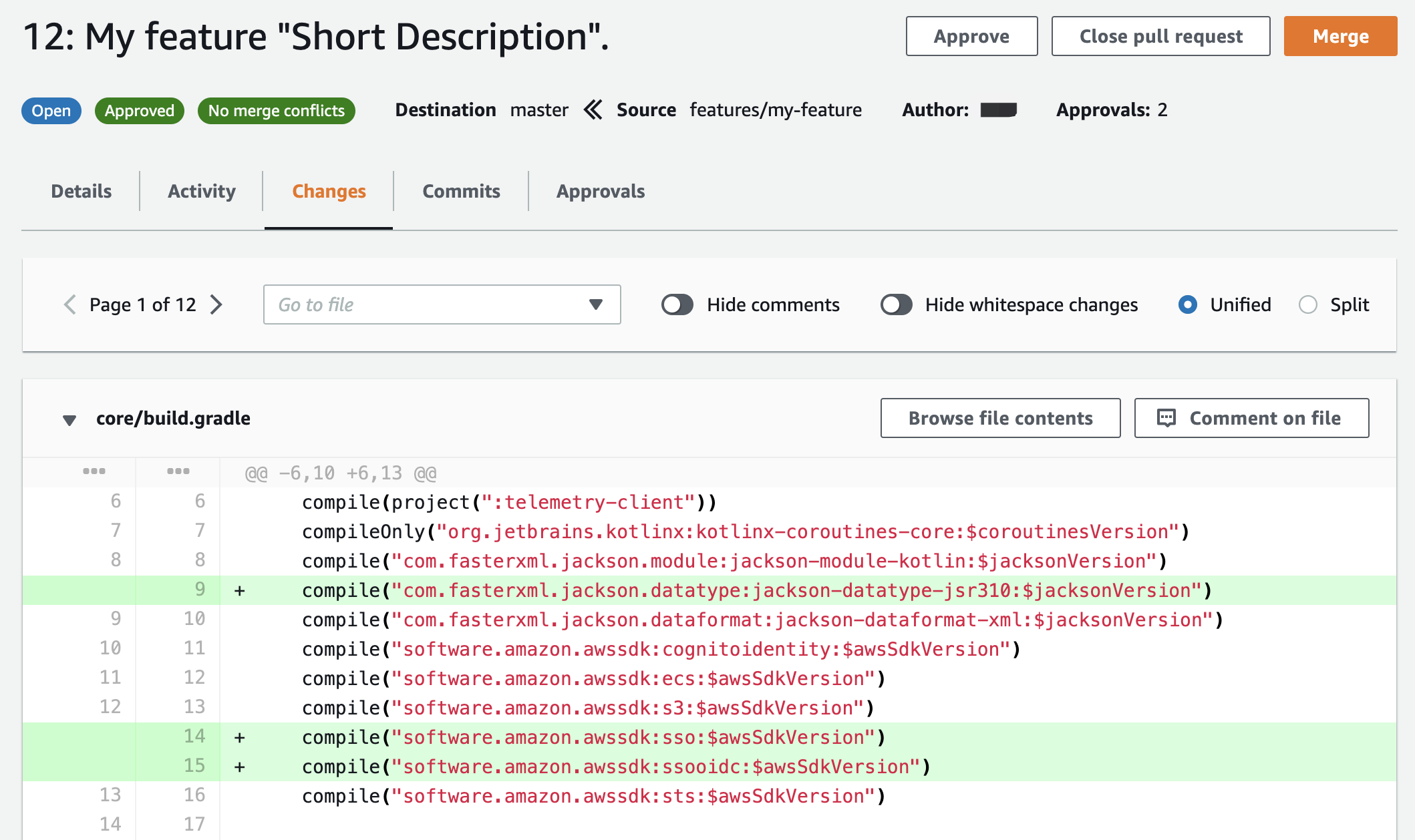 The following screenshot shows the approval details of the pull request, on the Approvals tab. 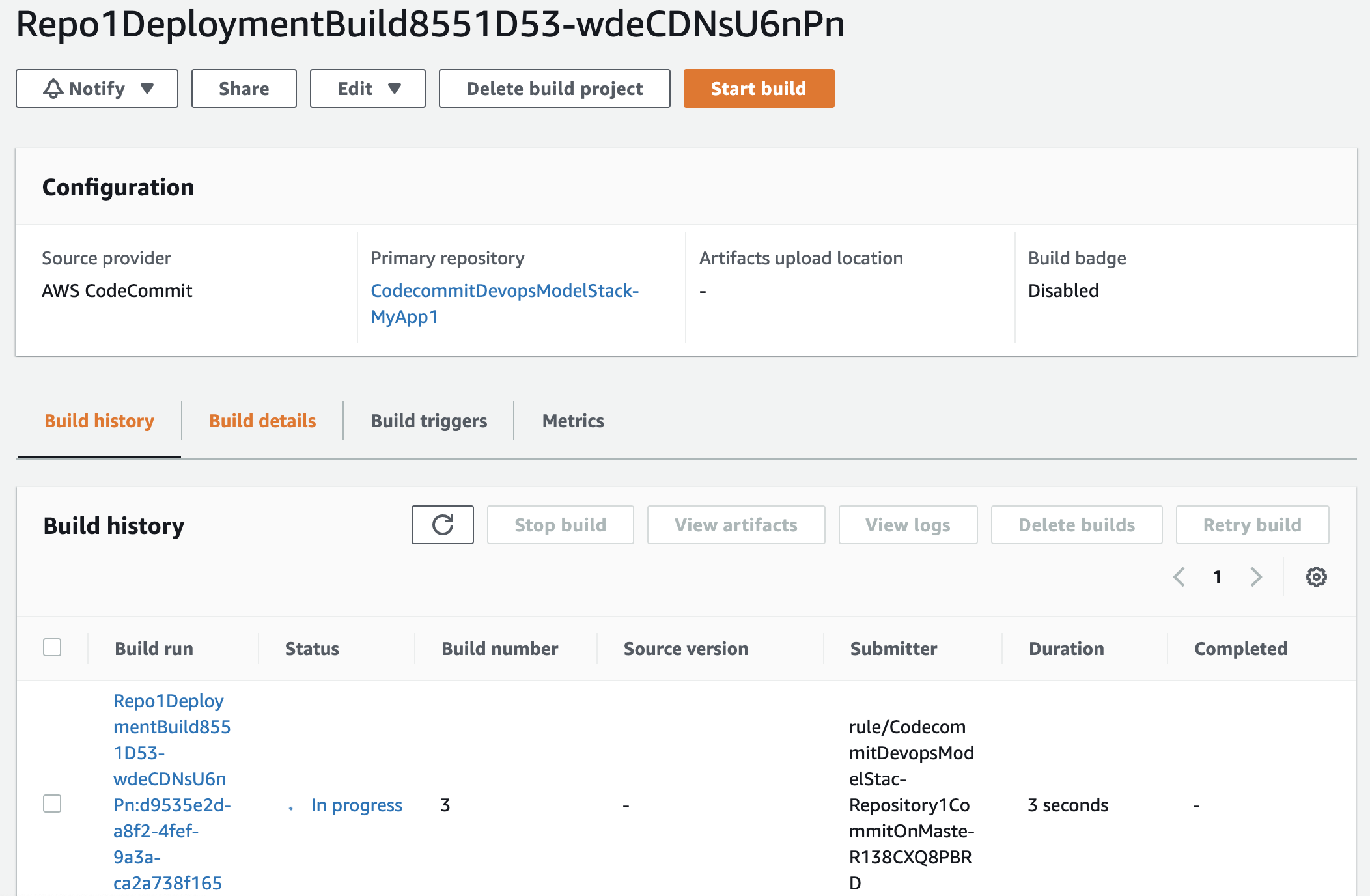 When you’re finished exploring this use case and discovering the deployed resources, the last step is to clean up your account. The following code deletes all the resources you created:

This post discussed agile development practices based on CodeCommit, including implementation mechanisms and practice processes, and demonstrated how to collaborate in development under those processes. AWS powers the code that manages the code repository itself and the DevOps processes built around it in the example application. You can use the IaC capability of AWS and apply those practices in your organization to build compliant and secure R&D processes.